Project "ZZ". Trump and Clinton: both will fight

11 May 2016
70
Thanks to a case study by the Military Times, it became known that the US military didn’t prefer Hillary Clinton, but Donald Trump. It was his representatives of the armed forces who would like to see the new commander in chief. The publicist P. L. Smith in the Salon publication was unable to determine exactly which of the two potential candidates is “worse”. If Hillary does not have an original mind and believes in absolute military domination and US domination, then Donald is ignorant and is a supporter of American nationalism and exclusivity. 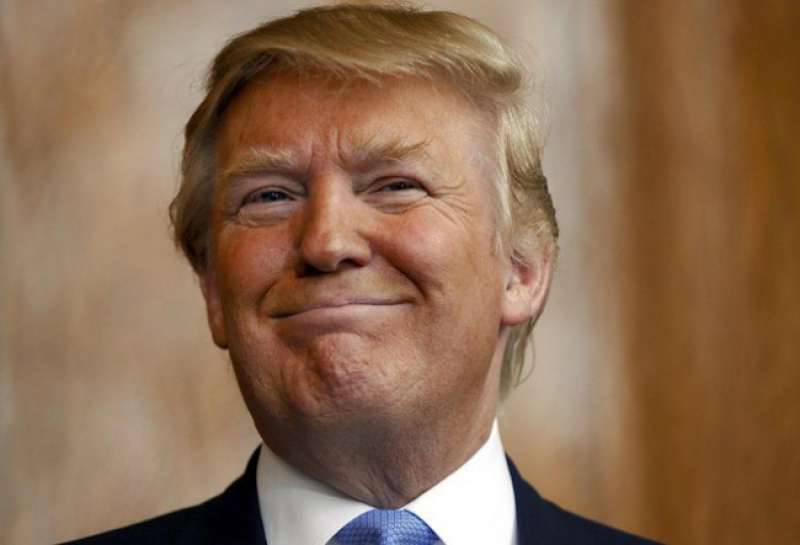 According to a case study "Military Times"conducted among US military personnel, Donald Trump is the preferred presidential candidate among those Americans related to active duty. He is ahead of Hillary Clinton by a margin of over 2 to 1. True, the 21 percentage of military personnel declare that they would abstain from voting if it were about one of these two candidates. 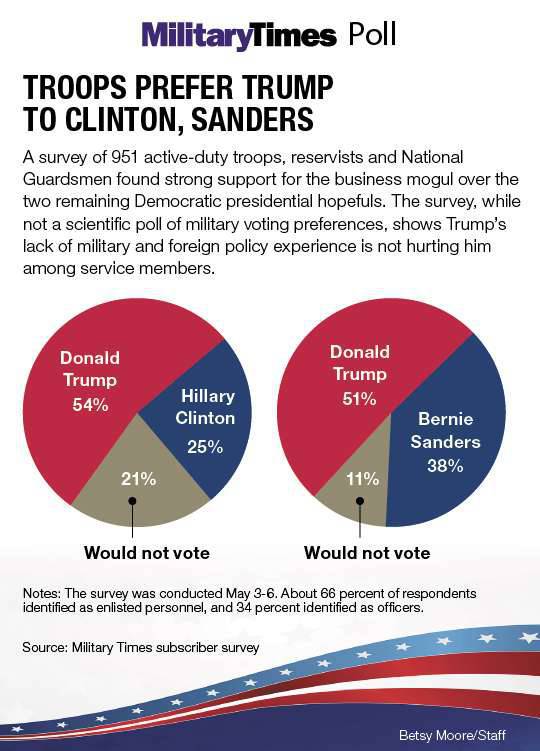 The results of the survey, thus, showed strong support for Trump by the military, despite attacks by critics who assure society that Trump has no experience in foreign policy or national security. 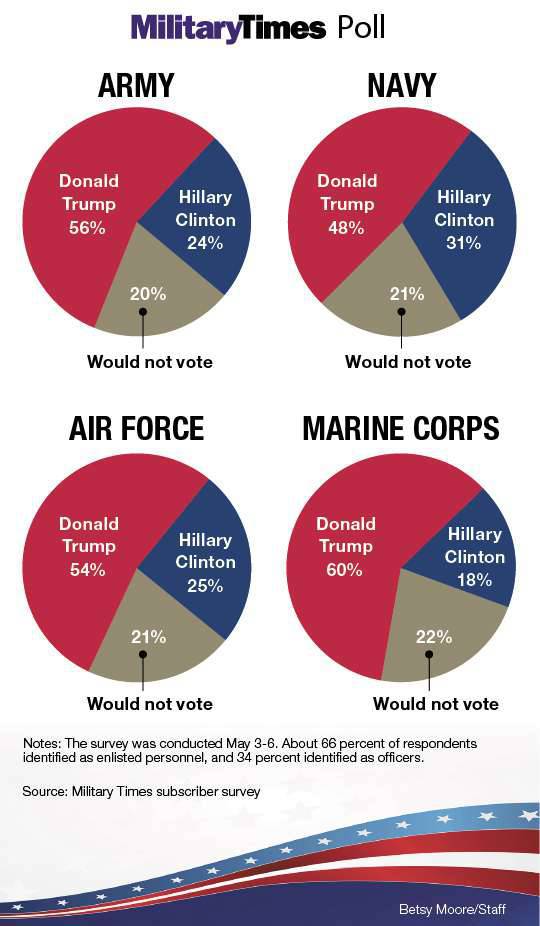 Results of the survey on the types of troops

Earlier, in the March Military Times poll, the military also showed a desire to see Trump in the presidential chair.

The current survey ran from 3 May through 6 May 2016. Participation was voluntary and confidential. The prevailing number of respondents were officers.

Journalist Gideon Rahman in the British newspaper Financial Times sadly notes that, let D. Trump lose the elections, his very participation in the election race will already leave an imprint on political life in the United States and the whole world, irrevocably changing it.

Mr. Rahman highlights some aspects of this influence.

One of the main points he considers the preaching of American nationalism, the global consequences of which can be very serious.

Trump also popularizes the idea of ​​a “clash of civilizations” (Western and Muslim).

The ignorance of the billionaire is also indirectly noted: the article lists his “relentless attacks” on universities and large media and clearly expresses sympathy for conspiracy hypotheses that are multiplying on the Internet.

According to the author, Trump is the figure that will play into the hands of the neo-nationalist generation both in the United States and in Europe.

Patrick L. Smith, columnist "Salon", a well-known publicist and writer whose themes are relations between East and West and the so-called post-American century, spoke with displeasure about those two potential candidates, one of whom might end up in the White House.

The outlined rivalry between Donald Trump and Hillary Clinton, in essence, means choosing between the bad or the worse. True, no one "can say which of the two will turn out to be the worst."

Former secretary of state rather a place in a television series, rather than in politics. Her foreign policy is so shameful that I don’t want to talk about it. On the other hand, many believe that Trump is "less dangerous" than this lady. But what is this argument? Is it better to choose the devil who is not familiar to us than the devil you know?

According to P. Smith, the Americans today are faced with a choice between a candidate, a well-trained government apparatus and the consolidated priorities of US military domination throughout the planet and neoliberal economic hegemony, and a candidate who has no experience in government.

Mrs. Clinton, presumably, will not change a little gnarlly in US foreign policy, no matter what she promised.

“Over the decades of public service, she never showed a single bit of fantasy and did not give birth to a single original thought on the issue of foreign policy. This refers to both the means and the ends. ”

She could, for example, to the surprise and disappointment of many, reappoint Robert Gates to the post of secretary of defense.

The author recalls that Mrs. Clinton seemed to declare a "reset" in relations between Russia and the United States, but as a result she suffered a complete collapse, since the very idea of ​​this reset was to try to impose on the Russian a model that should be characterized as follows: "Let's return to Yeltsin's servility." Nothing happened, but Putin is to blame for that. "Guilt" it is that he refused from such a policy. So what is the Clinton achievement? Probably, in the further unleashing of the arms race and the growth of the profits of military contractors.

In short, hardly anyone even in the Clinton camp, let alone her opponents, would risk asserting that Hillary would lead the US to positive changes in foreign policy. Voters whose favorite Clinton cannot figure out any new foreign policy plans; if they think that such plans exist, they either show stupidity or are hypocritical. These Americans in general should return to reality: the “American age” on the planet began in 1898 and ended in 2001. And Mrs. Clinton continues to defend what is not. Therefore, "it becomes impossible to justify the vote" for this lady.

The position of Trump, regarding his thesis about the "American exclusivity", the author also does not like. This billionaire clearly considers Americans "the greatest of great nations."

Thinking this way and trying to hypothetically pull up Russia with shouts of “don't do this,” Trump returns the United States to the era before Bush Junior. At that time, American presidents and state secretaries did not refuse to contact their geopolitical opponents. Trump will talk first, but not bomb.

However, Trump as a candidate has “too many problems.” The author with a grin calls his thinking on foreign policy “rudimentary”. It can not even make out. According to the publicist, he rather relies on some instincts and intuition, which helped him to promote the interests of the business everywhere. And one cannot foresee, therefore, what Trump will do in politics “in each particular case”. The author believes that Trump in general "does not understand, the reality is somewhat complicated."

Outstanding ignorance and belief in the exclusivity of Americans and their "deserved" domination on the planet, preached by both Hillary and Donald - this is the leitmotif, clearly traced in some publications of the Western press in recent days. Analysts, observers, and sociological scientists conducting research on the topic of the popularity of potential candidates are concerned not only about the upcoming elections in the United States, but also about how the new president will influence world politics. Between the lines in the American press there is a sad thought that either of the two possible candidates - both Clinton and Trump - do not have the original thinking and are capable, without thinking too much, of starting a world war.