Report of a Polish midwife from Osventz

14 May 2016
95
This must be known and passed on to generations so that this will never happen again. 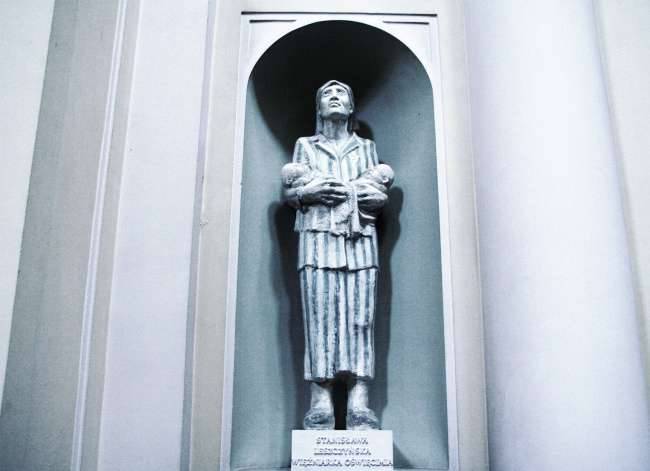 Monument to Stanislav Leszchinsky in the Church of St. Anne near Warsaw

Stanislaus Leszczyńska, a midwife from Poland, stayed at the Auschwitz camp for two years before January 26 and wrote this report only in 1945 year.

“Out of thirty-five years as a midwife, I spent two years as a prisoner of the Auschwitz-Brzezink female concentration camp, continuing to fulfill my professional duty. Among the huge number of women who arrived there were many pregnant women.

I performed the functions of a midwife there alternately in three barracks, which were built from planks with many cracks, gnawed by rats. Inside the barracks, on both sides, was a three-story cot. On each of them were to fit three or four women - on dirty straw mattresses. It was tough, because the straw had long since been worn away in dust, and the sick women lay almost on bare boards, besides not smooth, but with knots that had rubbed their bodies and bones.

In the middle, along the barrack, was a brick-built kiln with fireboxes at the edges. It was the only place for childbirth, as there was no other structure for this purpose. Stoked the stove only a few times a year. Therefore, the cold, painful, penetrating, pestered, especially in winter, when long icicles hung from the roof.

I had to take care of the water I needed for the mother and the child, but in order to bring one bucket of water, I had to spend at least twenty minutes.

Under these conditions, the fate of women in labor was deplorable, and the role of the midwife was unusually difficult: no aseptic means, no dressings. At first I was left on my own: in cases of complications requiring the intervention of a specialist doctor, for example, when manually separating the placenta, I had to act on my own. German camp doctors - Rode, Koenig and Mengele - could not “tarnish” their calling as a physician, assisting representatives of other nationalities, so I had no right to call for their help.

Later, several times I used the help of a Polish female doctor, Irena Ultimate, who worked in a neighboring department. And when I myself became ill with typhus, the doctor Irena Byalouvna provided me with a lot of help, caring for me and my patients.

I will not mention the work of doctors in Auschwitz, since what I have observed exceeds my ability to express in words the greatness of the doctor’s vocation and the heroic duty performed. The feat of the doctors and their dedication were imprinted in the hearts of those who will never be able to tell about it, because they accepted a martyr's death in captivity. The doctor at Auschwitz fought for the life of those sentenced to death, giving up his own life. He had at his disposal only a few packs of aspirin and a huge heart. There the doctor did not work for the sake of fame, honor or the satisfaction of professional ambitions. For him, there was only the duty of a doctor - to save life in any situation.

The number of births I took exceeded 3000. Despite the unbearable dirt, worms, rats, infectious diseases, lack of water and other horrors that are impossible to convey, something extraordinary happened there.

One day, an SS doctor ordered me to report on infections during childbirth and death among mothers and newborns. I replied that I did not have a single death among mothers or among children. The doctor looked at me in disbelief. He said that even the improved clinics of German universities can not boast of such success. In his eyes, I read anger and envy. Perhaps, to the limit, depleted organisms were too useless food for bacteria.

A woman preparing for childbirth was forced for a long time to deny herself rations of bread, for which she could get herself a sheet. She tore this sheet into patches that could serve as diapers for the baby.

Laundry diapers caused a lot of difficulties, especially because of the strict prohibition to leave the hut, as well as the inability to freely do something inside it. Washed diapers mothers dried on his own body.

Until May 1943, all children born in the Auschwitz camp were killed by the brutal method: they were drowned in a barrel. Nurses Clara and Pfani did this. The first was a midwife by profession and went to the camp for infanticide. Therefore, she was deprived of the right to work in the specialty. She was commissioned to do something for which she was more suitable. She was also entrusted with the leadership position of the head of the barrack. To help her, the German street girl Pfani was assigned. After each birth from the room of these women to women in labor came a loud gurgling and splashing of water. Soon after, the woman in labor could see the body of her child, thrown out of the barracks and torn by rats.

In May 1943, the situation of some children changed. Blue-eyed and fair-haired children were taken away from their mothers and sent to Germany for the purpose of denationalization. The piercing weeping of mothers carried away the carried away babies. As long as the child remained with the mother, motherhood itself was a ray of hope. Separation was terrible.

Jewish children continued to sink with merciless cruelty. There was no question of hiding a Jewish child or hiding it among non-Jewish children. Clara and Pfani alternately followed closely Jewish women during childbirth. The child’s birth was tattooed with his mother’s number, drowned in a barrel and thrown out of the barracks.

The fate of the other children was even worse: they died a slow death of starvation. Their skin became thin as if it were parchment, and tendons, blood vessels, and bones shone through it. Soviet children held on for the longest time - from the Soviet Union there were about 50% prisoners.
Among the many tragedies experienced there, I remember most vividly история women from Vilna, sent to Auschwitz for helping the partisans. Immediately after she gave birth to a child, one of the guards cried out her number (the prisoners in the camp were called by numbers). I went to explain her situation, but it did not help, but only caused anger. I realized that she was called to the crematorium. She wrapped the child in dirty paper and pressed it to her chest ... Her lips moved silently - apparently she wanted to sing a baby song, as mothers sometimes did, singing lullabies to her babies to comfort them in a painful cold and hunger and soften their bitter share.

But this woman did not have the strength ... she could not make a sound - only large tears flowed from under the eyelids, flowed down her unusually pale cheeks, falling on the head of the little condemned man. What was more tragic, it is difficult to say, the experience of the death of an infant dying in front of the mother, or the death of a mother in whose mind her living child remains, abandoned to the mercy of fate.

Among these nightmarish memories in my mind flashes one thought, one leitmotif. All children were born alive. Their goal was life! Survived camp nearly thirty of them. Several hundred children were taken to Germany for denationalization, more than 1500 were drowned by Klara and Pfani, more than 1000 children died from hunger and cold (these approximate figures do not include the period until the end of April 1943 of the year).

I still have not had the opportunity to send my obstetric report from Auschwitz to the Health Service. I am transmitting it now in the name of those who cannot say anything to the world about the evil caused by it, in the name of the mother and child.

If in my Fatherland, despite the sad experience of war, tendencies against life can arise, then I hope the voice of all midwives, all real mothers and fathers, all decent citizens in defense of life and the rights of the child.

In the concentration camp, all children - contrary to expectations - were born alive, beautiful, plump. Nature, opposed to hatred, fought hard for her rights, finding unknown life reserves. Nature is an obstetrician teacher. Together with nature, he fights for life and together with her proclaims the most beautiful thing in the world - the smile of a child. ”

Ctrl Enter
Noticed oshЫbku Highlight text and press. Ctrl + Enter
We are
The castle of Saint Florentine: "the castle that was never besieged, and in which they live"Ancient Russia and France in the XI century. The fate of the Russian princess Anna Yaroslavna
Military Reviewin Yandex News
Military Reviewin Google News
95 comments
Information
Dear reader, to leave comments on the publication, you must sign in.