Americans decided to find out what ordinary citizens in Europe and the post-Soviet countries think about anti-Russian sanctions.

11 May 2016
188
American Public Opinion Research Institute Gallup conducted an extensive sociological study in the countries of Southern and Eastern Europe, as well as in the post-Soviet space, on the subject of citizens' attitude towards anti-Russian sanctions. In total, the study touched 28 states.


Attention is drawn to the fact that the polls were conducted in the 2015 year, but with the publication of the results for some reason, 2016 was pulled up to the end of April. Apparently, at the Gallup Institute all this time they were digesting information, realizing how well it meets Western interests and the sanction pressure itself. Digested ... Now we can only guess how, after such a long period of digestion, the published data correspond to the real results of the survey.

The overall result presented by the Gallup Institute looks like this: 47% of respondents said they supported the imposition of sanctions, 32% expressed the opposite opinion, the rest (and this is no less than 21%) found it difficult to give a definite answer. At the same time, Gallup notes that the attitude to economic sanctions against the Russian Federation depended very significantly on the country in which the survey was conducted.

Thus, the smallest number of supporters of anti-Russian sanctions outside the post-Soviet space lives in Serbia. There 5% of respondents were in favor of sanctions. This figure eloquently indicates how many Serbian citizens really want Belgrade to break off relations with Moscow on the orders of Washington and Brussels.

The largest number of persons speaking out for anti-Russian economic sanctions is in Poland. The result of the Gallup poll is 70%. Polish citizens, who spoke out in support of anti-Russian sanctions, must have “pleased” Polish farmers, who are forced to dump their agricultural products under the windows of buildings in which the authorities in their understanding are built by Polish authorities. In general, thanks to 70% of Poles (and not only) for the fact that the Russian agricultural sector has a unique chance to develop at a very active pace in conditions when representatives of the agricultural sector of Europe itself are counting losses.

The three leaders in supporting anti-Russian sanctions (talking about countries and territories that are not part of the post-Soviet space) include Albania (60%) and Kosovo (57%). That is, the main breeding grounds of European radical Islamism and the settlers of the underworld from anti-Russian sanctions are absolutely delighted ... Well, this is understandable. In the septic tanks always boils up something of their own, striving to overrun over the edge, as was the case when Kosovo was forcibly rejected from Serbia.

Other results of supporting anti-Russian sanctions for non-former Soviet republics: 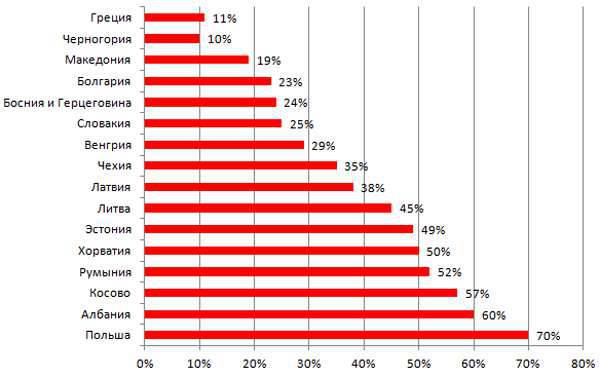 As can be seen, only in four states and one pseudo-state (from those represented) the percentage of support for Western sanctions against the Russian Federation is 50% and above. And this is also taking into account the fact that Gallup "digested" the data.

And now about the results of a similar survey conducted by the same American institution in the 11 states of the post-Soviet space.

The most interesting thing is that far from Russia the smallest number of those who support Western sanctions. So, if, in a survey in the Russian Federation, the sanctions supported 5% of respondents, then, for example, in Uzbekistan only 2%. Results for other countries in which Gallup conducted the survey:

The three leaders in terms of supporting anti-Russian sanctions in the post-Soviet space are as follows: 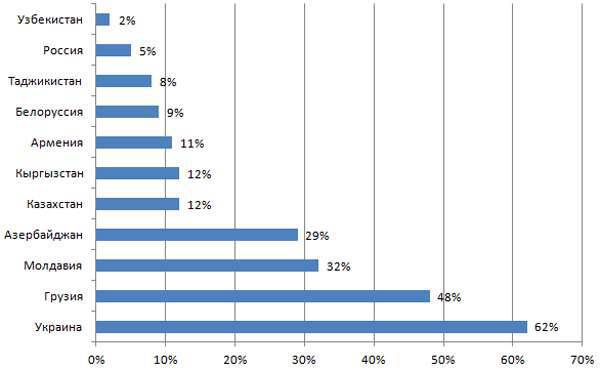 And here you catch yourself thinking about how you would answer the question of the Gallup representatives yourself ... It would seem that these notorious sanctions are an indispensable evil that the West uses to undermine the economic base of the Russian Federation. And if the question was asked a year ago in 2014, the answer would be: “I categorically do not support it.” But now the thoughts are completely different. After all, as you know, until the thunder strikes, the peasant will not cross himself - that is, until there were these sanctions, Russia, to put it mildly, did not particularly care that it was better to develop its own production than to sponsor the production sphere of the same European powers. It was after the imposition of sanctions by the West that we suddenly learned that we could fill the store shelves with high-quality and competitive food products of our own production, which we ourselves could produce aviation engines and other accessories for various types of equipment. It was after the introduction of anti-Russian sanctions that our farmers got at least some hope that their products would be in real demand in the huge domestic market. Yes, of course, there are enough minuses from anti-Russian sanctions, but are there more of them than pluses? - here the grandmother also said in two ... Therefore, to those 5% of Russians supporting the anti-Russian sanctions imposed by the West, with the permission of Gallup, I will add myself - for the reasons mentioned above. Maybe the truth is, import substitution will ultimately spill out for Russia not only the transition to “Belarusian shrimp” and the rejection of Turkish tomatoes ...

Ctrl Enter
Noticed oshЫbku Highlight text and press. Ctrl + Enter
We are
Russophobia and the dark art of making anti-Russian magazine covers (Medium, USA)Results of the week. “And let's have a smoke! In our opinion, in Brazil! ”
Military Reviewin Yandex News
Military Reviewin Google News
188 comments
Information
Dear reader, to leave comments on the publication, you must sign in.