Events in honor of the 71 anniversary of the Victory, held in the republics of Central Asia (photo compilation)

10 May 2016
22
Solemn events in honor of the 71 anniversary of the victory on the eve were held in various CIS countries. Despite the rainy weather, festive processions and rallies took place in the Kyrgyz capital Bishkek. According to the estimates of Kyrgyz journalists and according to the local state statistics services, there are fewer than 900 veterans of the Great Patriotic War living in the republic today. On May 9, the President of the Republic Almazbek Atambayev personally met with some of them. 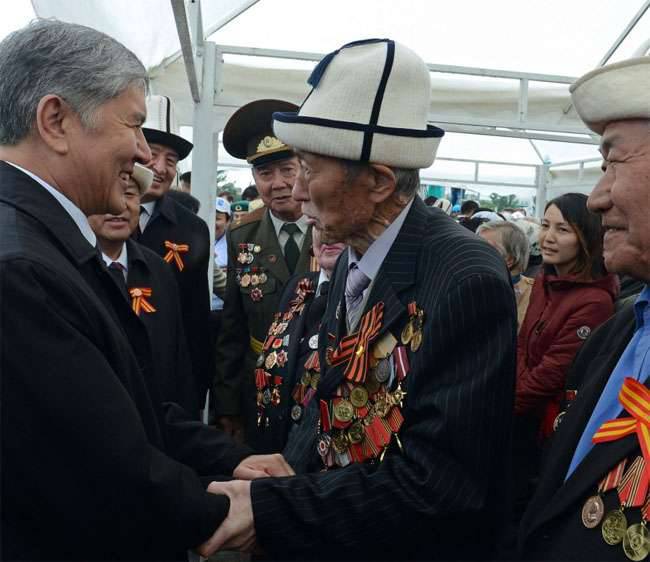 Flowers were laid at the memorial in honor of the fallen soldiers, organized by the marches of Kyrgyz soldiers.

Photos of the Kyrgyz portal AKIpress: 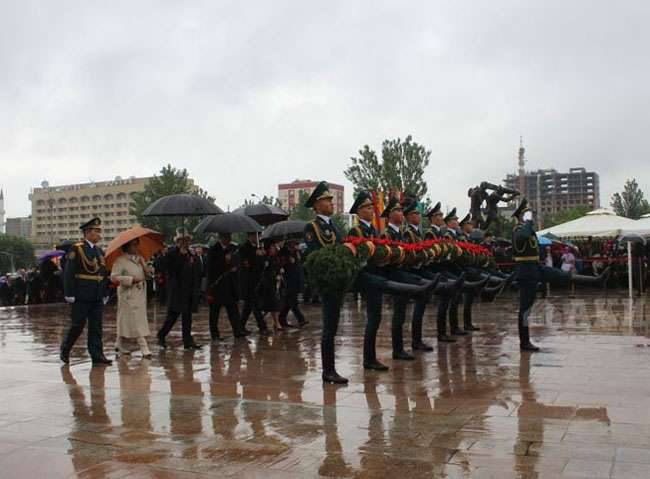 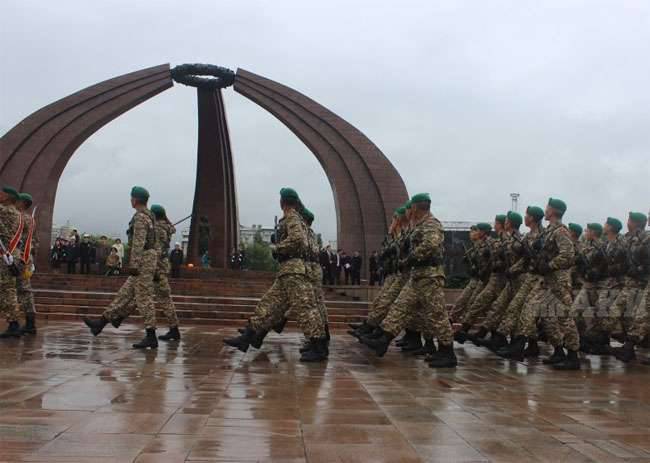 The action "Immortal regiment" in Bishkek was attended by at least 20 thousands of people. 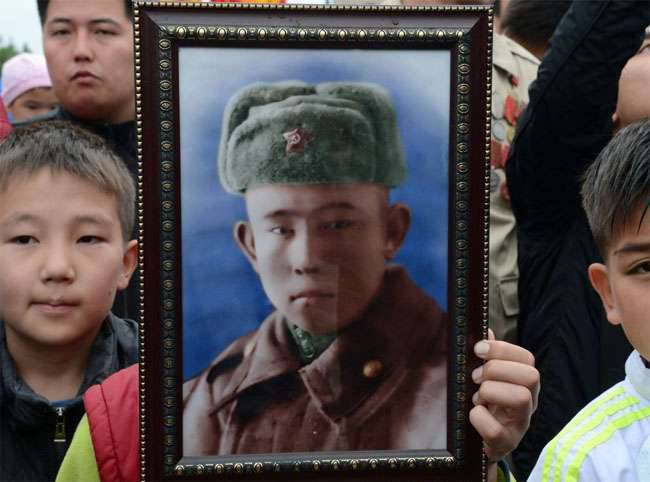 May 9 events in honor of the 71 anniversary of the Victory were held in Dushanbe. The President of Tajikistan, Emomali Rakhmon, laid a wreath at the memorial to the Tajik soldiers and soldiers who died during the Great Patriotic War. made a speech:
From Tajikistan, hundreds of thousands of men participated in the bloody war fronts, who showed invisible heroism. Most of the envoys of Tajikistan, fulfilling their filial duty, died in the fierce battles of the war, their memory forever imprinted on the pages stories of our people. Despite the fact that the battlefield was far from Tajikistan, its influence was felt and observed in all corners of our country and in every family. The Tajik people made a significant contribution to ensuring victory and the rear. If during the war years there was no strong and reliable rear, dedication and tireless work of the working people, this Great Victory would never have been ensured. Despite the many difficulties, the Tajik people in the shortest time in the rear mobilized all the economic structures of the republic for the needs of the war period. The main labor force in the rear was predominantly women, adolescents and the elderly. 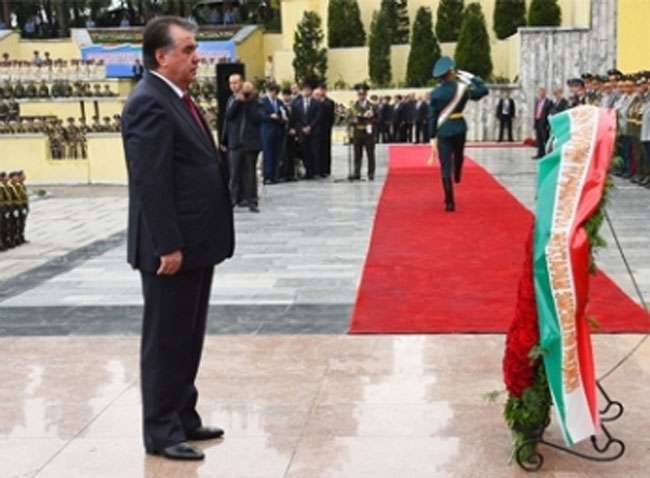 639 participants and disabled people of the 9 war of May 2016 of the year received 4 thousand somoni as a one-time financial assistance (about 33,6 thousand rubles).

There were ceremonial events in Uzbekistan. The head of the republic, to the sounds of a military orchestra, laid a wreath at the monument to the Grieving Mother, and then met with veterans:

Islam Karimov:
These days in all cities and villages of our country, in every family, old and young, all our compatriots celebrate 9 on May - the Day of memory and honor, the 71 anniversary of the Victory over fascism in the Great Patriotic War. It gives me great satisfaction to congratulate our veterans, who have shown courage and heroism in winning this Great Victory, our compatriots, who worked selflessly in the rear, to wish them good health and a long life. 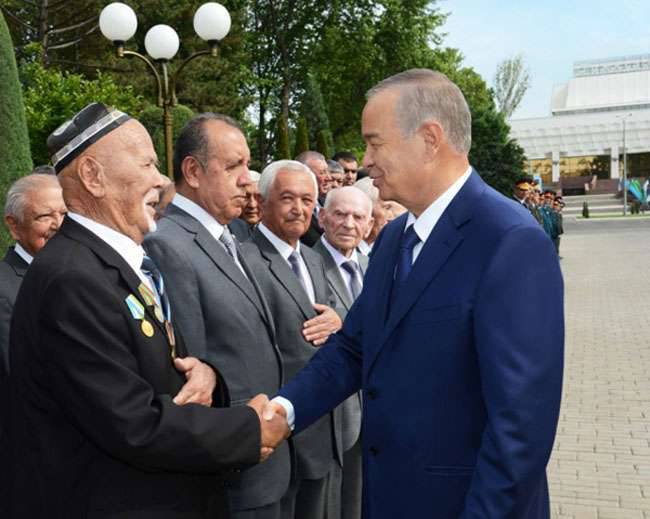 This date, which will remain in history as an unforgettable day, is the fact that among the thousands and thousands of people of various nationalities who showed courage and steadfastness in winning victory over fascism, there were many of our compatriots, our fathers and grandfathers, many of whom did not return from the war, 338 of our compatriots were awarded the high title of hero, thousands - awarded with military orders and medals - all this, undoubtedly, overwhelms our hearts with a sense of pride. 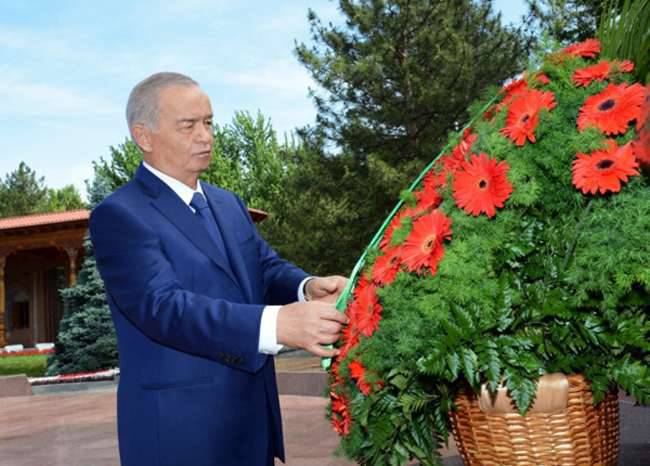 (...) when it comes to the contribution of our people to the fight against fascism, we again and again remember the immeasurable losses that will forever remain an unhealing wound in our hearts.

In this regard, I think it is appropriate to cite the following figures.

The population of Uzbekistan at the beginning of the war was about 6,5 million people, of whom 1,5 million participated in the war. If we consider that more than 500 thousands of them died on the battlefields, many returned disabled, and many went missing, then by itself it is obvious how much this victory cost us.

Congratulated the veterans of the Great Patriotic War and the president of Turkmenistan Gurbanguly Berdimuhamedov (quoted by the presidential press service):
Victory Day is a holiday proclaiming the ideas of peaceful coexistence, goodwill, humanism, calling on peoples to friendly and fraternal relations. Victory Day plays an important role in strengthening social cohesion, educating the young generation in the spirit of true patriotism and high morality. We respectfully recall our heroes, who displayed in the fierce battles in the name of freedom a high example of courage, courage and indomitable will. We also remember the workers of the rear, who were carrying the labor watch day and night, bringing the long-awaited Victory 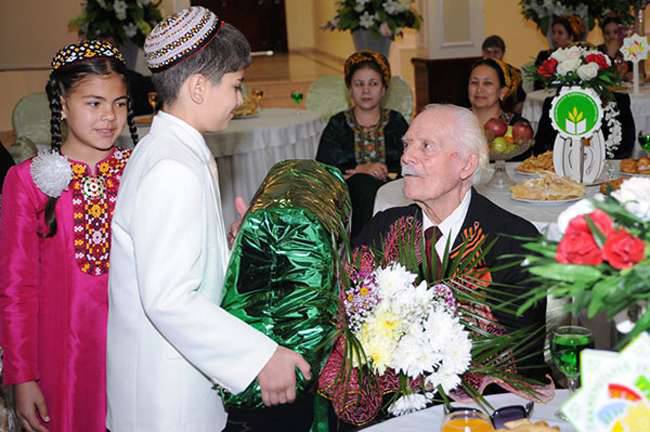 During the years of the Second World War 104 Turkmen were given the title of Hero of the Soviet Union, 15 military men became full holders of the Order of Glory. In total, awards for participation in the Great Patriotic War were received by more than 70 by the thousands of residents of Turkmenistan.