10 May 2016
54
In Nikolaev, members of the so-called civil corps "Azov" 9 May attacked the participants of a peaceful rally organized in honor of the anniversary of the Victory, reports Look with reference to “Gromadskoe Radio”. 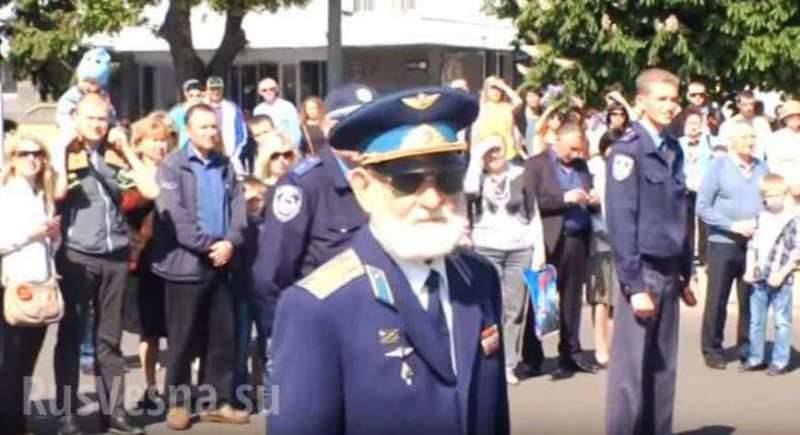 First, the road to the demonstrators was blocked by police officers who demanded that red flags be removed from the column. They were told that such flags are allowed, since there are no inscriptions and symbols on them. As a result, the demonstrators managed to break through the police cordon.

But then in the center of the city the Azovs attacked the convoy. They began to “pull out flagpoles with red panels from the hands of the demonstrators, which caused fights that had developed into clashes,” the newspaper writes.

The police failed to divide the two enemy camps in time, and as a result, an elderly man was severely beaten by nationalists, who fell to the ground from the blows and lost consciousness.

The attackers, of course, disappeared, and the law enforcement officers promised to establish their identities and detain them.

“Their actions are not just blasphemy against veterans and the elderly. This is meanness, low and unworthy! And it was not done without the approval of the authorities, which continues to take away from veterans historywhich is written by their exploits, their heroism, their selflessness, ”said Royal.

She noted that "it is the veterans who are the real patriots of their country, because patriotism is concrete deeds and a concrete mark in history, and not beautiful slogans not supported by anything."

“Veterans asked to convey to everyone that they were not afraid, and, as they once won the Great Patriotic War, today we will achieve victory over inadequacy, radicalism and anger. We will not let anyone rewrite history and rob people of the memory of the Great Victory. A great feat will always live in our hearts and in the history of our country, ”the MP said.

In Odessa, in spite of the action of the "immortal regiment", the nationalists staged their "parade of embroidery".

“Maydanovtsy convoy together with the police marched to the Walk of Fame, where they shouting“ Fascism will not pass, ”“ Odessa is a glorious city ”were greeted by the participants of the“ Immortal Regiment ”. In response, representatives of patriotic organizations began to chant: "Glory to Ukraine! Glory to the heroes!" As a result, the participants of both actions began to shout to each other. Militiamen built a cordon between them and restrained clashes, ”says the local press.

"Vyshivanki" laid flowers to the memorial, sang the national anthem of Ukraine and left the Walk of Fame. Participants of the "Immortal Regiment" remained at the monument to the Unknown Sailor, they remembered the soldiers and sang songs of the war years.

In Cherkassy, ​​the “Azovs” and “Svobodovtsy” actually broke the solemn event. They insulted the veterans, calling them "clowns with clowns" and demanded to remove the red flag. To avoid conflict, the police also demanded to remove the cloth. As a result, the law enforcers achieved their goal, and the flag was brought into the building of the city executive committee.

Ctrl Enter
Noticed oshЫbku Highlight text and press. Ctrl + Enter
We are
In search of a national idea: a project for choosing the main symbols of RussiaIn the center of Moscow a nest of “aliens” appeared: the installation with the eggs of the “fifth column” was exhibited in Novopushkinsky Square and at the editorial office of Echo of Moscow on the New
Military Reviewin Yandex News
Military Reviewin Google News
54 comments
Ad