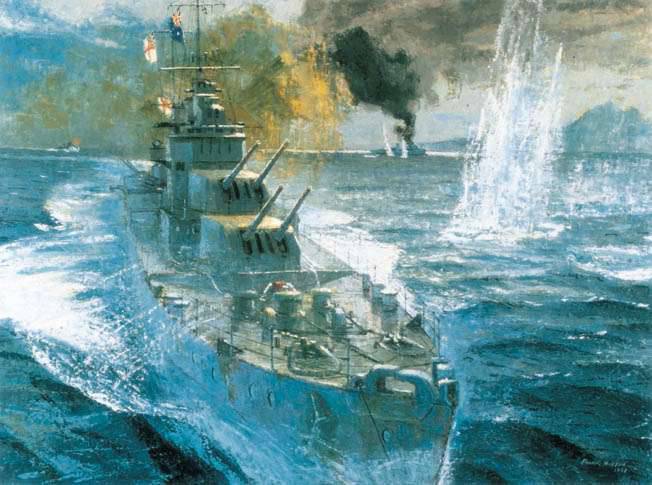 ... the battle was inevitable. In 19: 28, flagmen lowered the Dutch flag, and a black swastika hopped up on the gaff. At the same time, the disguised cannons of the Cormoran opened fire on the enemy. Mortally wounded, "Sydney" managed to put a total of eight shells into the gangster and melted on the horizon, enveloped in flames from bow to stern.

After the battle, the fascists lauded for a long time how their civilian ship did away with the warship in a matter of minutes. That's just the plot of this tale is more prosaic. The Cormoran was a real floating stronghold, with a trained crew and an insane amount of weapons on board. Such a corsair was not inferior to the warship in terms of firepower and most characteristics. Otherwise, how could he sink the Australian cruiser?

The main caliber of the merchant ship was six 150-mm 15 cm SK L / 45 naval cannons, which, like the other raiders, were carefully hidden behind the metal sheets of deliberately high bulwarks.

For comparison: any destroyer of that era carried four or five universal guns of a much smaller caliber (114 ... 130 mm). So which of them is a warship?

Little is still known about the fire control system. There is evidence that the presence of an 3-meter rangefinder in the superstructure was standard for all raiders. “Cormoran”, in addition to him, had two more artillery rangefinders with a base 1,25 meter.

Even taking into account not the most effective location of part of artillery in dungeons, in which no more than 4-guns could fire on one side, the Cormoran’s firepower was enough to fight face-to-face with any light cruiser of the 1930-1 . (where the concept of “lightness” was not determined by the size of the ship, but by the limitation of the main caliber of six inches).

It is worth noting that in the event of a battle, the Allied cruisers would have to be the first to move closer, while the raider would also be located outside the shelling zone of part of the GK towers. And artificial restrictions in the construction of cruisers 30-x. led to their armor completely not holding six-inch shells. They were as “cardboard” as the “peaceful” cargo ship. For exact identification of which it took long hours, while the raider was ready at any moment to open fire on the enemy.

In the bow, open to all winds, there was a masked universal installation caliber 75 mm.

Nearby, everywhere, anti-aircraft guns were placed. Nothing unusual. Anti-aircraft weapons typical cruiser or destroyer of the initial period of WWII. Five 20 mm “Flac 30” with 450 firing rate / min., Supported by two 37-mm rapid-fire anti-tank PaK36 (by coincidence, installed instead of 37-mm automatic anti-aircraft guns). The radar, which was originally planned, had to be left ashore due to breakdowns. 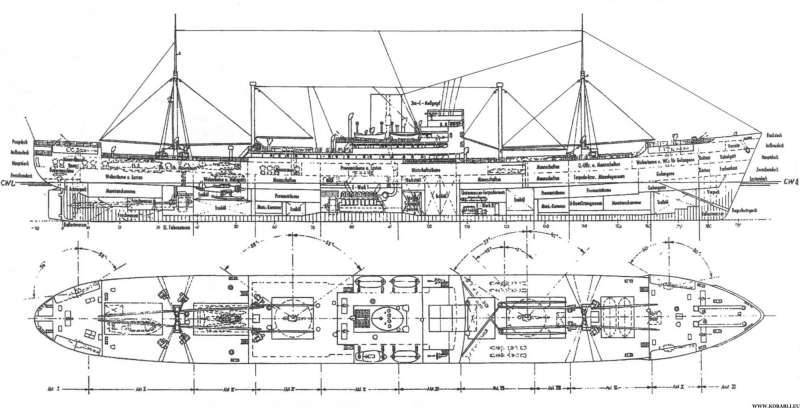 While volleys of artillery guns thundered, a new portion of death rushed to the target, pushing the slippery body apart over the sea. Six torpedo tubes of caliber 533 mm (two twin-tube on the upper deck and two submarines, in the stern of the raider) with 24 ammunition torpedoes.

That's not all. The Cormoran’s arsenal also included 360 anchor mines such as EMC and 30 magnetic TMB mines.

Two seaplanes “Arado-196” for conducting reconnaissance in the ocean and a speedboat of the LS-3 type “Meteorit” for carrying out torpedo attacks and secretive setting of minefields at the entrance to enemy ports.

The crew - 397 desperate thugs (10 times more than the usual dry cargo ship!) And the commander Ditmers, the motto of which was “There are no hopeless situations - there are people who solve them”.

Here is such a fun "shopkeeper." 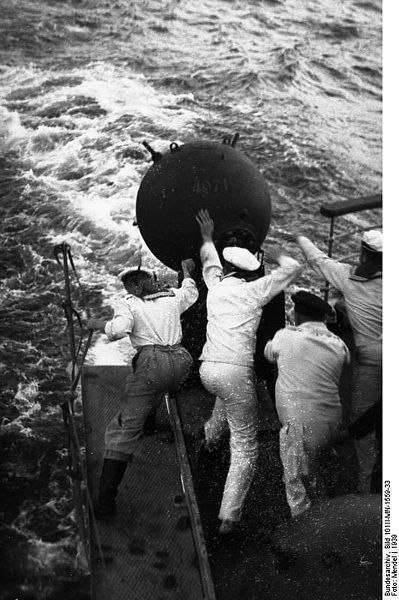 “The battle showed how skillful the enemy ships are to change their appearance and what dilemma the captain of a cruiser trying to expose has to face. The danger to which a cruiser is exposed, approaching such a ship too closely and from a direction convenient for gunfire and torpedo firing is obvious - the raider always has the tactical advantage of surprise ", - recalled Captain Roskill, commander of the cruiser “Cornwall”, who with great luck managed to calculate and destroy a similar raider “Penguin”. At the same time, the cruiser at a certain moment was itself in the balance of death: one of the six-inch shells of the “Penguin” interrupted his steering.

From the testimony of Soviet officers aboard the Komet raider:

“The German steamer Komet is a team of 200 people (in fact, 270), the pipe is reworked, the sides are double, the command bridge is armored. It has a well-equipped radio station, around the clock, without removing the headphones, sit 6 radio operators. The seventh man from the radio operators does not listen to himself, he has the rank of officer. Transmitter power provides direct radio communication with Berlin. ”

In August 1940, the raider “Komet” (the operational code Kriegsmarine HKS-7, in British intelligence reports “Raider B”) was secretly carried directly to the rear of the Anglo-Saxons by the Northern Sea Route. On the way, the corsair was successfully disguised as the Soviet “Semyon Dezhnev”, and after breaking through into the Pacific Ocean, for a while pretended to be Japanese “Maniyo-Maru”. 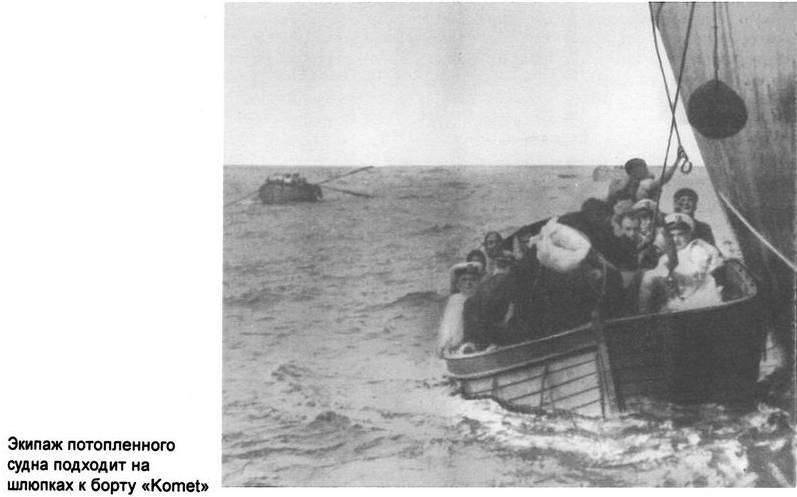 It was not by chance that the commander of the raider, Captain Zuze See Eissen, was introduced to the rank of Rear Admiral for that campaign. The obtained data on the navigation conditions on the Northern Sea Route were later used by the crews of German submarines and during the breakthrough of the Scharnhorst in the Kara Sea (Operation Horse Turn, 1943).

Disguised guns, fake sides and cargo arrows. Banners of all states of the world. Boats and aviation.

That Australian cruiser was doomed from the start. Even if his commander were a little more experienced and cautious, even if he did not go a mile closer to the vessel being inspected, the outcome of the battle would still look like an unequivocal way. Perhaps it would have changed only the sequence of death - the first “Cormoran” sank with the whole crew, who still managed to inflict deadly wounds on “Sydney”.

The aforementioned cruiser “Cornwall” had at least a caliber 203 mm, was larger and stronger than the “Australian”. The unfortunate HMAS Sydney (9 thousand tons, 8 x 152 mm) was left without any chance of survival when meeting with the peaceful German “trafficker”.

The lag in speed from cruisers and destroyers was bathed by the colossal cruising range, unattainable for warships, with their powerful and “voracious” GEM. Thanks to economical diesel-electric installation, “Cormoran” was able to go around the globe. While 18 nodes are not so few, given the fact that warships rarely developed in practice above 20 ... 25 nodes. At full speed dramatically increases fuel consumption and quickly “killed” resource.

... “Cormoran”, “Thor”, the legendary “Atlantis”, which became the most productive surface ship Kriegsmarine (for 622 of the day of raiding, they sank the 22 of the vessel, the total tonnage of gross registered tons 144). And stupidly died - the Devonshire cruiser patrol aircraft appeared over him at the time of refueling by a German submarine raider. At the same time, the British opened all the cards. The heavy cruiser immediately destroyed the “peace merchant”, tearing the Atlantis from its eight-inch guns. Alas, such luck happened only once. The aforementioned "Thor" and "Komet" have caused misfortunes and, having avoided any retribution, returned safely to Germany. 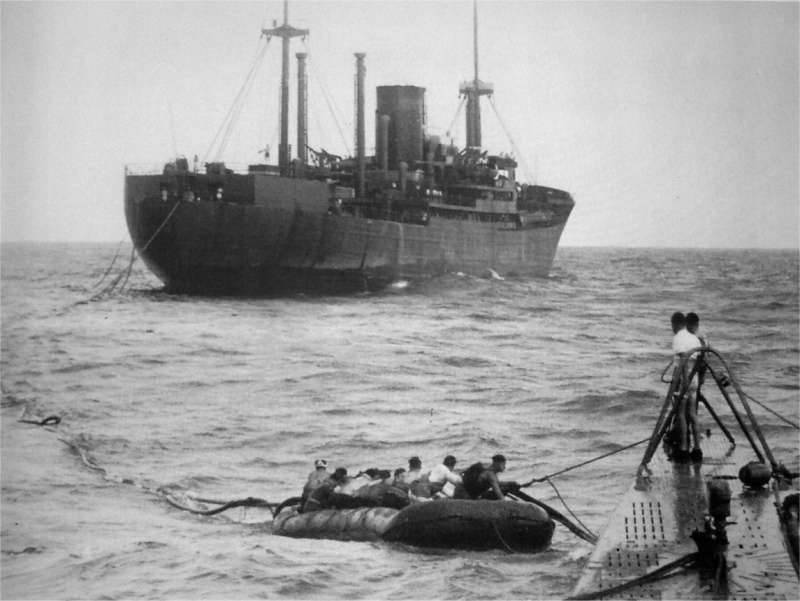 They could all. Mutual aid arm in 10 000 miles from home shores - Cormoran supplies submarine

Exceptionally formidable and versatile combat units. “Ghosts of the oceans”. Eternal lone wanderers who killed anyone who met on their way.

Capable of unrecognizability to change their appearance and fight in any of the climatic zones. With any possible equipment, from sleds and skis to tropical uniforms and trinkets for the inhabitants of the Pacific Islands. With powerful weapons, communications, all necessary for active hostilities, conducting cunning "radio games" and secretive intelligence.

Both the Atlantic, and the Quiet, and the Indian Oceans absorbed the reflections of the panic radio signal "QQQ", which the radio operator’s hand in the radio room, carried by the raider’s fire, hastily beat up. They absorbed it with blood and flesh, the dead hulls of hundreds of ships, victims of unknown ships. Coming “from nowhere” and going to “nowhere”.