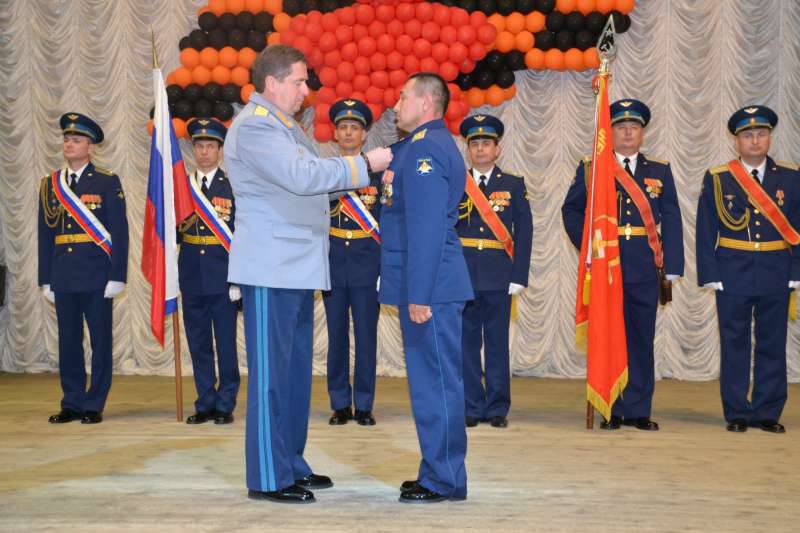 At once, with a dark blue wave, the pilots got up and, together with the garrison singer, gasped with one echo: “Happy Victory Day!” This is one dark blue brotherhood! These golden shoulder straps and glitter medals! It is difficult to describe! How they were one at that moment. They united their memory and common work in the sky, which they perform as well as their grandfathers and great-grandfathers did many years ago. 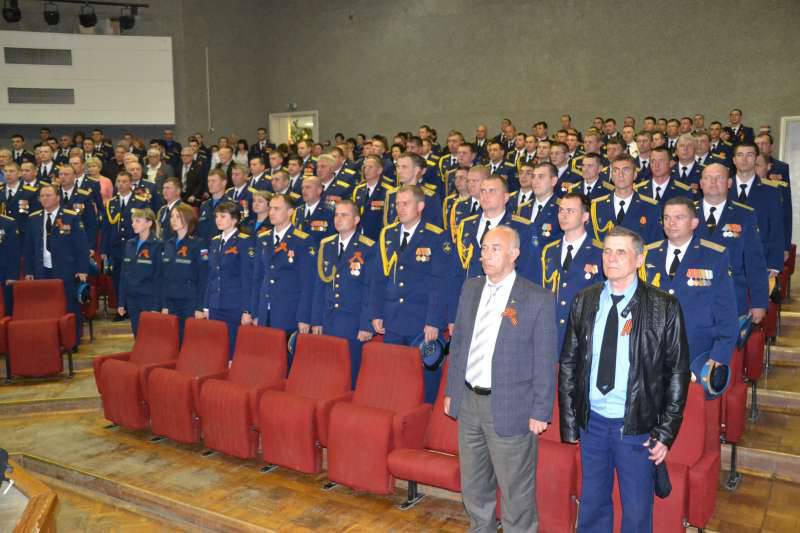 According to the sounds of the anthem, the banner group contributed the national flag of Russia and the battle banner of the union. Among those accompanying - Major Oleg Morozov, whose grandmother and grandfather fought on the Western Front.

Also during his speech, the commander of the 4 air army stressed that during the war years the army pilots made 340 000 sorties, from the foothills of the Caucasus to the Elbe. This year, the pilots performed the most complicated state tasks to support the counter-terrorist operation in Syria. Now, air defense and air force troops are preparing for the largest Kavkaz-2016 exercises: they will be held in September on the territory of three federal districts. Alexander Galkin, the commander of the troops of the Southern Military District, described the preparation for them as a priority in the work of military units for the near future.

In addition, the pilots of the 4 Air Army are preparing to ensure the air safety of the anniversary Russia-ASEAN summit, which will take place from 19 to 20 in May in Sochi.

"For service aviation and helicopter regiments received over 60 units. equipment, including the latest Su-34 fighter-bombers, Su-30SM multifunctional fighters, modernized Su-24M front-line bombers, Su-25SM3 attack aircraft and modern Mi-28N, Mi-35M, Ka-52 attack helicopters, transport and assault helicopters Mi-8AMTSh ", - said the commander of the Southern Military District Alexander Galkin at the beginning of 2016 during his final briefing to reporters (a message about this was published on the website of the Ministry of Defense of the Russian Federation).

And now the chairman of the United Council of the Union of War Veterans and Military Service 4 of the Red Banner Army of the Air Force and Air Defense, Honored Military Pilot of the USSR, Major General (Ret.) Viktor Vladimirovich Grishin takes the stage. 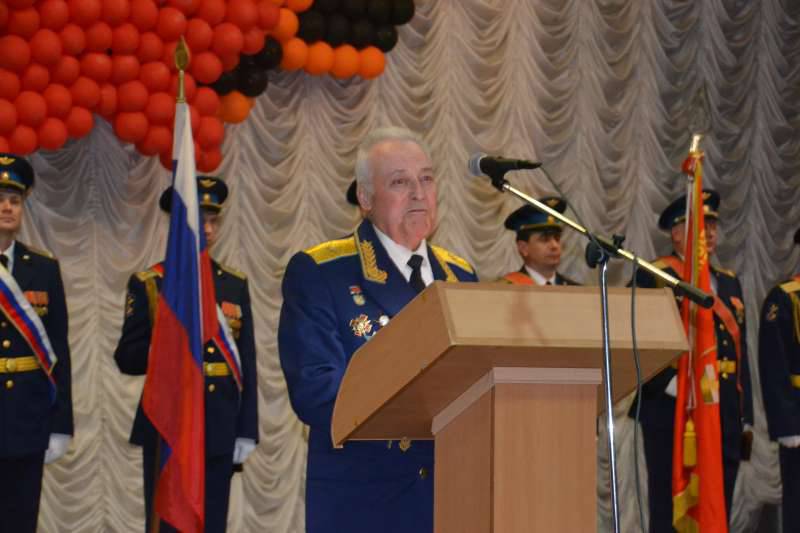 - Congratulations on the 71 anniversary of the great Victory. These were the most difficult years for our country. For the first time at the rally, Ivanovo weavers proclaimed the main idea for the work of the whole country: everything for the front, everything for victory. And the front and rear became one. But at what cost? Every minute, 13-14 people died in the war. Review this time is impossible. But our task is to preserve the memory of those people who, at the cost of their lives, defended the Motherland. And this memory must be effective. Memory must not only be stored in hearts, but also continued in business. First of all, it concerns our youth. Two of us who thought two years ago that this could happen in Ukraine, where the revival of fascist slogans and provocative nationalist movements is taking place today. In the center of war veterans, we are showing a film where Ukrainian women and children in 2015 raise their hands in a Nazi salute. But Ukraine suffered a lot from the hands of the fascist-German invaders. And today, the descendants, it turns out, deliberately forget those bitter years, dooming themselves to no less pain. And it is necessary to resist this competently and purposefully. And who can do this?

The primary task of veterans is also that, in addition to their military duty, they must fulfill their civic duty. You can sit out on the couch. Here, he, the TV, all the amenities of life. But you have to be honest with yourself and with the country. Our task is not to miss the youth.

I am already afraid to ask in schools about some details concerning the Great Patriotic War. Do schoolchildren know that there were 4 Heroes of the Soviet Union in 227 Army, 5000 aircraft shot down? This is a significant contribution to the victory. In the Kuban sky for the first time we have reached excellence. There were shot down 800 German aircraft. We must not forget that time. But our pilots were met by German planes on wooden, outdated vehicles. Only 90 aircraft 4-th Air Army opposed 1 250 German aircraft. Only in 1942, the country was able to rebuild the entire economy on a war footing, accelerate and issue new types of aircraft, which in their technical characteristics were still inferior to German ones: only two LaGGs could “take” Messerschmitt. But our pilots fought for every opportunity to destroy the enemy. It was committed 635 air rams, land - more 1000. But what about the Germans? Yes, nothing. Out of ammo - coup and leaving the base. All the same, get money for a combat mission. And our people fought for their homeland. This remained after the war in the genes of our people. The latest events in Syria confirm this. It was in the genes of the deceased in Syria, Alexander Prokhorenko. It was in the genes of Dmitry Petrov, the deputy commander of the sixth company - he was engaged in the Rostov flying club before the army. Once surrounded, he called the fire on himself. How to explain it? This is a manifestation of supreme courage. Give life for the motherland. And today we, army veterans, understand that we are approaching our time limit. To many of us 70-80 years.

And those who fought, remained units. Today, Colonel Gnyotov Alexander Fedorovich (20 August 1922 year of birth) was going to come to our meeting. I call. And he does not leave the house. It turns out that at 11 in the morning he was taken by ambulance and is now doing an emergency operation. In 1942, he graduated from the Engel School, made 146 combat missions, was awarded four Orders of the Red Banner, two Orders of the Red Star, and in the position of Deputy Commander of 96, Bn Major Gniotov in Berlin met the Victory.

I understand that today, being in the army, you are not in time to deal with veterans' affairs, but it will take time, and you will also become veterans. I beg you! Convey all that we have passed, do not stop! Live further, protecting the spiritual priorities of the country. 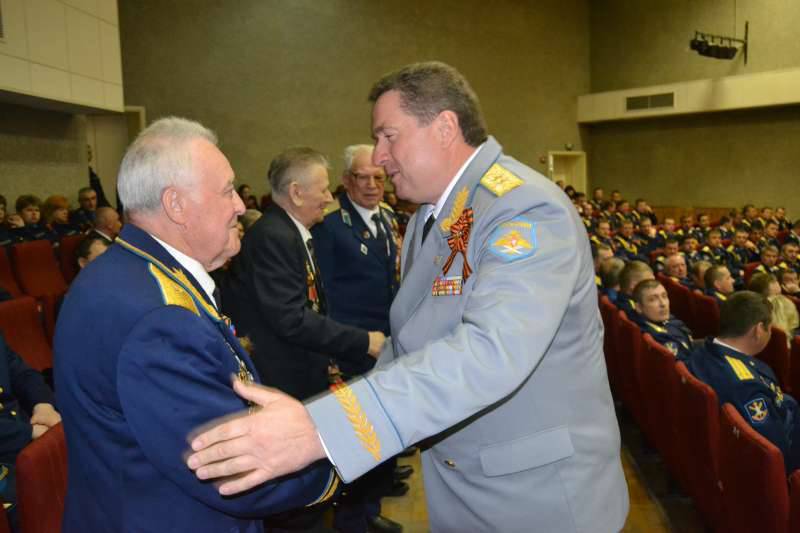 And this call Grishin, I think, will be fulfilled. Indeed, many representatives of military dynasties gathered in the Rostov garrison Officers' Club. The head of the department - the deputy head of the personnel department, Colonel Nechiporenko Oleg Vladimirovich, can “rely” on his grandfather and father. Grandfather - Nechiporenko Daniil Ivanovich, born 1900, went through the whole war, from Lvov to Berlin, served in the 16 Air Army in engineering and technical service, retired to the reserve in the rank of lieutenant colonel. Father - Colonel Nechiporenko Vladimir Danilovich, was the commander of the 83 Guards Aviation Regiment, based in the city of Rostov-on-Don.

It seems that these people have already received a reliable spiritual foundation. It seems that such a foundation is “erected” by the awarded soldiers of the 4 Air Army.

The word for the announcement of holiday orders was given to Chief of Staff - First Deputy Commander of the 4-th Army of the Air Force and Air Defense, Major-General Sheremet Roman Valerievich.

So, for the fulfillment of military duty, the difference in service and in commemoration of the 71 anniversary in the years of the Great Patriotic War 1941-1945, Nesterov's medal was awarded to Senior Lieutenant Sergey Pimakha. 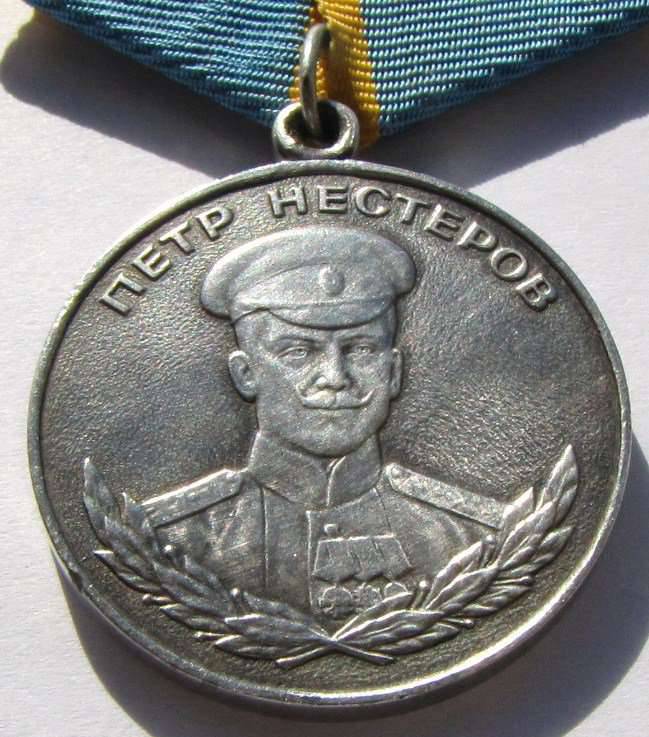 The medal “For Military Valor” was awarded to Colonel Kostyakov Sergey Grigorievich. “According to the provision, the medal“ For Military Valor ”is awarded to servicemen of the Russian Federation for excellent performance in combat training, field (air, maritime) training; for special differences in the performance of combat service and combat duty, on exercises and maneuvers; for courage, dedication and other merits shown in the performance of military duty. "

The star of the concert program, of course, was Larisa Yakovenko, who twice went to Syria with performances before military pilots performing their duty during the counterterrorist operation. So, how many years ago Claudius Shulzhenko sang on the fronts of the Great Patriotic War ... 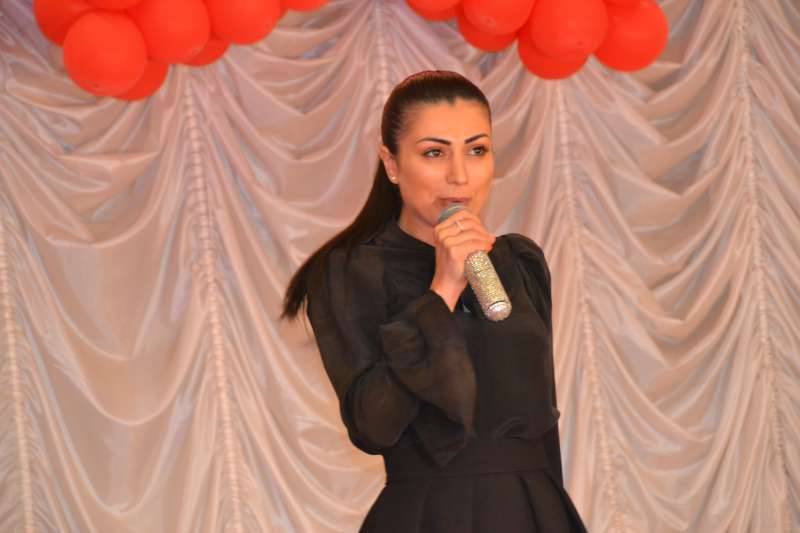 Larisa is a fragile, black-eyed mother of two children, 13 is in the army service for years. She never thought that her fate would be like that and, as she says, got into armored control completely by accident. But this lucky chance became decisive in her fate. Probably, her great-grandfather would be proud of such an excellent continuer of military traditions, which is still enough time for song creation.

“My great-grandfather, Pashayan Pasha Shirinovich, shooter, 1919, was born in Berlin, reached Berlin, and after the war he created a family where 13 children were born, including my grandmother Larisa, after whom I was named,” says Larisa Yakovenko.

After the concert, everyone went out into the spacious lobby to talk, hug in a friendly atmosphere.

In the honorable environment are military pilots in front of a man in ordinary civilian clothes. This is the guard lieutenant colonel Ivan Lazarevich Shevtsov, the participant of the very first parade on the Red Square 1945 of the year. 15 June he will be 91 year.

In March 1943, he volunteered for the front, got into machine gun crew, and then he was sent to Saratov tank school, in six months he graduated from it. He fought in Poland.

- 22 June 1945 of the year, I, the commander of a tank platoon, on the orders of the commander after successful battles were sent on a business trip to Uralvagonzavod, where with the beginning of the war, the production of tanks was organized. There we received five new SAU-85 installations and drove them to Moscow, where they began to rehearse their passages. And then ... What can I tell you? There was a great feeling of happiness and a great sense of responsibility for each step. I remember paving stones, I remember my teams.

- Did you see Stalin?

- Of course, we all wanted to see our leaders. They stood on the Mausoleum, and we saw how they looked at our progress. We can say that I saw Stalin personally. These were inexpressible feelings of pride and happiness. We stayed alive. Our Motherland is a winner.

They congratulate each other on the great Victory Day. The greatness of this day every year is felt more acutely, and louder I want to say that our country is a country of winners. No matter what they say. It was we who had to pay a huge price so that today both Europe, and Russia, and all other countries could live in peace and harmony. But to achieve this, you need to constantly improve your combat skills, you need to constantly learn and teach others. Holiday should not exist one day. It is necessary to keep these precious moments in your heart and remember them and keep them in yourself, these precious minutes of the sun and unforgettable happiness that our grandfathers gave us many years ago. And thank them that we have the opportunity to touch their great spiritual heritage, to hear from them the words of support and truth that curt politicians are trying to reshape today: they don’t know that they can’t kill the armor-piercing truth about the war with boastful idle talk.

Ctrl Enter
Noticed oshЫbku Highlight text and press. Ctrl + Enter
We are
Innovation Day of the Southern Military District: Pictures from the ExhibitionThe action “Military service under the contract is your choice!” In Rostov-on-Don: future contract servicemen, exhibitions and “Russian Knights”
Military Reviewin Yandex News
Military Reviewin Google News
1 comment
Information
Dear reader, to leave comments on the publication, you must sign in.