10 May 2016
32
After the little-known Kiev professor found Ukrainian roots in Jesus Christ, the world is already difficult to surprise with something. However, try! Today is turning stories Ukraine has become a real craft for unscrupulous scientists and amateurs, excited by shtetl nationalism. This public has become a tradition to celebrate the anniversary of the Great Victory with new projects that distort the real events of the Second World War. This year was no exception. 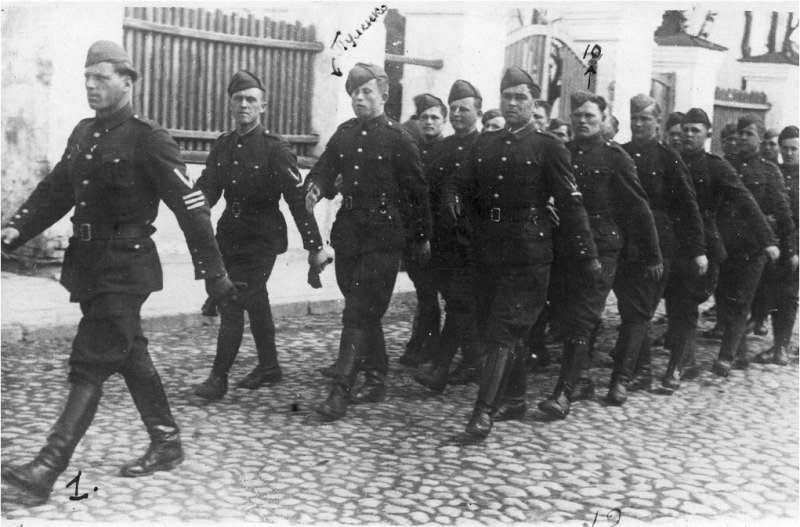 About 250 thousands of Ukrainians fought on the side of the Third Reich. Of these, only a small part were German citizens. For others, it was their own difficult choice - the desire to liberate their native land or the thirst for revenge, but more often - just a way to survive. Photo and comment from the site http://www.ww2.memory.gov.ua

According to the patterns of a single customer

By the anniversary of the Victory over fascist Germany, Ukrainian historians pleased their compatriots with new discoveries that allow them to “move away from the mythologized and heroic vision of the events of the Second World War, which was formed in the Soviet historical discourse”. It is not difficult to guess that this “discourse” is shifted in favor of the Ukrainian Insurgent Army (UPA), from where the current Kiev authorities are now recruiting new “national heroes”.

On this May 5 at a press conference in the Ukrainian Crisis Media Center, reported the chairman of the Ukrainian Institute of National Memory, Vladimir Vyatrovich. Together with his colleagues, he presented three new outreach projects: the website “Ukrainian World War II", The project" War makes no exceptions "and the book" War and Myth.

According to Vyatrovich, the Ukrainian Second World War began in 1939, and the Soviet Union "was one of those key players who pushed the world into World War II." On this interpretation, the “discourse” of the website is being built, which now “is a kind of educational tool that can be used by everyone, in particular, by students and teachers to prepare for lessons”.

The authors of the site made sure that the Ukrainian schoolchildren received quite definite knowledge. Even the vocabulary of objective facts sets it up. Here's how, for example, the site provides information on the number of Ukrainians who fought on the fronts of the Second World War in 1939 - 1945. The infographic is accompanied by the text “six million Ukrainians served in the ranks of the Soviet Armed Forces; about a hundred thousand fought in the Ukrainian Insurgent Army, 120 thousand in the Polish Army, 80 thousand in the US Armed Forces and 45 thousand in the armies of the British Empire. ”

The crafty "served" (the rest at this time fought) little fits with other reliable facts, in particular, the losses in the Second World War. Ukrainians died from 8 to 10 million people, of whom more than five million are civilians. The remaining losses, it turns out, came at the time of "passing" military service.

This is a new interpretation. Last year, then-Kiev Prime Minister Arseniy Yatsenyuk practiced manipulating numbers to prove: Ukraine is the main winner on the Eastern Front of the Second World War. In the course were the names and the number of "Ukrainian" fronts, the names of the heroes - the Soviet Ukrainians, their real combat exploits. Something has now migrated to the website: “Ukrainian Alexei Berest raised the USSR flag over the Reichstag. Ukrainian Michael Strenk raised the US flag on Iwo Jima ”. (The Kiev historians preferred to keep silent about the rest of the participants in these exploits.)

Last year's historical delights of the Ukrainian prime minister did not find a response even from overseas patrons of the current Kiev authorities and were quietly forgotten. But an attack on the main holiday of the Ukrainian SSR, Victory Day, was developed.

Ukrainian professor, historian Vasily Marochko calls the celebration of 9 a post-Soviet tradition. “May 9 is not a fixed date, which is directly related to the end of the war. Today this day is a symbol of Soviet agitation and propaganda, it is beneficial for Russia. This is a slogan, a form of influence on people, ”explains Marochko, the current Ukrainian“ discourse ”- to celebrate, like most Europeans, May 8 is the Day of Memory and Reconciliation.

Admittedly, like-minded Ukrainian historian is in Moscow offices. A couple of days after the commemorative press conference at the Kiev media center, Lenta.ru published an interview with Lev Gudkov, Ph.D., director of analytical Levada Center. It was also about the Victory Day. Referring to the data of a public opinion poll, Gudkov admitted that it was 9 of May that the Russians consider Victory Day to be the main state-national holiday. So say more than 80 percent of respondents. Two-thirds of Russians celebrate his feast, with family and friends, watching the parade on TV.

From this authoritative sociologist, Professor Gudkov makes a paradoxical conclusion: “The current Victory cult is fundamentally different from celebrating the end of the Second World War in Europe - there is a day of grief, and it is inscribed in the practice of understanding the past. We have the opposite: the glorification of Victory is a way of collective self-assertion and oblivion of the victims. Through this process, the national inferiority complex is being overcome, because there are no other major national achievements. ”

Lev Gudkov is an informed person. Among other things, he is the chief editor of the journal "Public Opinion Bulletin", a teacher of the sociology of culture at the Institute of European Cultures at the RSUH and Political Sociology at the Moscow Higher School of Social and Economic Sciences. So, by definition, this person should have knowledge above the secondary school, and even there they know about the “Immortal Regiment”, numerous Memory Watches, search teams and our national achievements, which the civilized world values.

Therefore, Gudkov's lament in Lente.ru is not a new word in real knowledge, but an expression of a political position. It seems that the Russian professor and Ukrainian historians have one common customer, whose goal is to belittle the feat of the Soviet people and its role in the Great Victory over fascism.

In Western Europe and the United States have already formed a stable "discourse", which country played a major role in the defeat of Nazism. The other day the international news agency "Sputnik" published data from a survey conducted by British and French sociological companies. Leadership in the victory over fascism belongs to America. Of this, almost 80 percent are surveyed in the United States, almost 60 - in France, 50 percent - in Germany. Now Ukraine is being unconscious. As we can see, representatives of Russian liberals got up to a low start in this campaign.

What kind of heroes are now glorified by Ukrainian historians

To belittle the significance of the Victory Day for the Ukrainians tried almost from the first days of the existence of an independent Ukraine. It's easy to explain. The new power of the republic was seriously influenced by the ethnic diasporas in America, largely formed by the emigrant waves after the world wars, when Western Ukrainians rushed overseas after defeats on the battlefields.

Already under President Viktor Yushchenko, traditional military parades were moved from May 9 to August 24 - Independence Day. Yushchenko began to teach the country to the fact that the main defenders of Ukraine from the Nazis were not the soldiers of the Red Army, but the UPA fighters. The real veterans of the Great Patriotic War tried to boo the President’s verbose speeches about the heroes of the rebel army, but the authorities could no longer stop.

It seemed that President Viktor Yanukovych would restore historical justice. In the year of the 65 anniversary of Victory, large-scale military parades took place in all major cities of Ukraine. In Kiev, together with the Ukrainian military, the 45-th separate guards regiment of the special forces of the Russian airborne troops and soldiers of the Belarusian subunits marched in parade. Thousands of people adorned with St. George ribbons, and Xnumx-meter-made St. George ribbon made in Odessa was carried along Khreshchatyk.

It’s true that already in Lviv, the local court banned any celebrations on Victory Day, and activists of the small town party “Svoboda”, represented by the heirs of UPA fighters, persecuted war veterans, trampled and burned Soviet flags. Kiev then chose not to notice this civil confrontation. Over time, it only grew. A year after the anniversary, the situation escalated in such a way that the nationalists had already turned to serious fights with the use of weapons, smoke bombs and cobblestones.

On that day, Lviv police did not allow veterans to lay flowers at the memorial over the Hill of Glory. Local nationalists took away and trampled the wreath of the Consul General of Russia in Lviv. The scandalous episode of the Kiev authorities left without consequences. The nationalist sabbath ended with a coup in 2014, and the black-and-red flags of the rebel army and portraits of its leaders were affirmed above the crowd.

Last April, the new Ukrainian government finally abandoned the terms "Great Patriotic War" and "Victory Day." The festivities were moved to May 8 (“like in Europe”), and the holiday itself was called “Victory Day over Nazism in World War II”. For the holiday, they produced new military medals decorated in the traditional black-and-red colors for nationalists. At the whim of the authorities, they are now honoring those who suffered a crushing defeat along with the Nazis in this Great War.

Unscrupulous Ukrainian historians are now adjusting their fake theories to them. But the people did not forget about their Great Victory. Last year, thousands of security officials and militants of nationalist battalions kept people from disobedience to the authorities. But no incidents have not done. The clashes and clashes occurred in Kharkov, Dnepropetrovsk, Mariupol, and in Zaporozhye Melitopol they sounded the speech of the Ukrainian military about “Russian occupants”, and then completely drowned out his performance with the song “Holy War”.

With this in mind, the Minister of Internal Affairs of Ukraine Arsen Avakov now allowed the possibility of "large-scale provocations" during the celebration of 9 May. In order to avoid civil confrontation and social upheavals, the authorities again mobilized security forces and armed nationalists.

Kiev authorities were not afraid in vain. May 9 The Immortal Regiment marched through the streets of Kiev, Kharkov, Odessa and other cities of Ukraine. And almost everywhere, these marches were accompanied by attacks and provocations of nationalists, obstacles imposed by the local police. But people fulfilled their duty of remembrance in front of the veterans of the Great Patriotic War, who presented them with the Great Victory.

It is difficult to say how much this effort is enough, but the Victory, obtained by incredible work and great blood, is not so easy to take from people. She will outlive the temporalists in power and history and will long remain in memory as a great feat, feasible for not every people ...