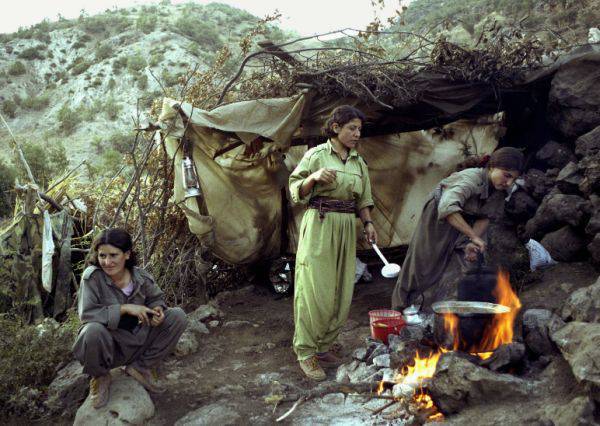 Back in historyin the most significant period of activity of the Iranian Kurds. It is important to note that at the beginning of the 20th century, the Kurdish movement was not regional in nature, but regional. And it has always developed synchronously and throughout Kurdistan. This feature is inherent throughout the Middle East.

1946 year will be remembered for the Kurdish history of the creation of the first sovereign state. And his creator was Kazi Mohammed, who held the position of spiritual and secular judge and mayor. And it was called - the Makhabad Republic, known among the Kurds under the name "Mukrinsky Kurdistan". Independence was proclaimed in January 1946.

Mehabad has become the cultural capital of the whole of Kurdistan. The entire education system in the region has been translated into Kurdish. A project was introduced to introduce universal compulsory secondary education for children from 6 to 14. To eliminate adult illiteracy, it was intended to organize evening courses in schools. In the printing house, the equipment of which was supplied from the USSR, began the active publication of literature and textbooks in Kurdish. They also staged the first opera in Kurdish.

With the onset of spring, the question of protecting the republic from possible hostile actions on the part of Iran became acute. The top of the local tribes could not be a reliable support. The main stronghold of the Kazi Mohammed government was the Barzani tribe who emigrated from Iraq; 2 Thousands of Barzans, led by military leader Mustafa Barzani, formed the backbone of the republic’s armed forces.

In general, the Mehabad Republic, of course, was doomed. The movement had a top character and did not enjoy mass support even among local tribes. The republic arose due to exceptional circumstances (Soviet occupation) and fell as soon as these circumstances ceased to operate.

The Republic was liquidated from outside in December of the same 1946 year. The “president” of the republic, Kazi Mohammed, was hanged, and its commander-in-chief, Mustafa Barzani, was forced to flee with his unit. Almost a year of independence and state self-determination, which the Kurds have not yet been able to repeat.

Republic can be called the first example of the unsuccessful game of the Soviet Union with the Kurdish map. The Kurdish factor helped the USSR break South Azerbaijan from Iran and weaken the Shah’s regime.

What is happening in modern Iran?

To begin with, let's consider the ethnic and religious structure of the republic. It is heterogeneous, Iran is the 16-st country in the world for the diversity of ethnic groups and languages.

Persians make up about half of the country's population (51% -65%), Azeris 16-25%, Kurds 7% (about 10 million). For comparison: in Syria, the Kurds have 8%. Iranian society is also distinguished by numerous ethnic and tribal groups — Assyrians, Armenians, Jews, Circassians, Georgians, Masendians, etc. The state religion is Shiite Islam, which is professed by 89% of the population, 9% of the population is Sunni, 2% is Christian, and Zoroastrians. Iran’s largest Jewish community in the region lives in Iran.

In Iran, there are 5 Kurdish provinces:

Given the heterogeneity of the ethno-confessional composition, the state national policy is of significant importance. Before the Islamic revolution in Iran, the policy of the elites was based on the principle of “united Iranian people,” whose goal is to prevent separatist sentiments and preserve the territorial integrity of the country. In the process of the Islamic revolution in Iran, power in Iranian Kurdistan turned out to be practically in the hands of the Kurds. However, as early as March of the revolutionary year, armed clashes began between the detachments of the "Democratic Party of Iranian Kurdistan" and the Guards of the Islamic Revolution sent from Tehran. In early September, the Iranians launched a massive offensive, as a result of which government forces managed to take control of the bulk of Iranian Kurdistan. Then there were changes in the Constitution of Iran: the term "united people" was replaced by a combination of "religious unity."

State interaction in Iran is complicated by such factors as ethnoconfesional diversity, the diversity of languages ​​and dialects (in Kurdish, Persian and Azeri-Turkic), the national policy in the context of "Persian superiority", as well as the features of the administrative division of the country. The Islamic Republic is divided into ostans (provinces), incl. on religious, linguistic, national signs. Such a device plays a significant role in the process of integrating minorities into the “united Iranian people”. If in any Ostan the ethnic minority makes up 10 − 15% of the population of the province, then this situation may well lead to destabilization of the area.

The region of Iranian Kurdistan bordering on the Kurdish autonomy of Iraq is one of the poorest in the Islamic republic. The backward social and economic situation of the local population has not changed since the beginning of the 20th century. Many of the inhabitants of Iranian Kurdistan find work in the autonomous region, and many earn small-scale border trade, transporting goods on donkeys and horses. Today, there are two official border crossings between Iran and Kurdistan - Haji Omran and Parviz Hanare. Through them can follow trucks and large trailers with goods. The volume of semi-illegal border trade with Iran is unknown, but the volume of legal trade through the Iranian-Kurdistan border in 2013 amounted to 4 billion dollars. In addition, residents of both states can cross the border without a visa.

It should be noted that all four countries with the territories of Ethnic Kurdistan pursue the same repressive anti-Kurdish policy, all of them seek to suppress any possible Kurdish movement. Iran is no exception. The regime in Iran is the wildest and toughest against the Kurdish minority. In order not to be unfounded, I will cite data from the report of Amnesty International (an independent human rights organization).

I quote: “In the Persian Gulf region, the Iranian government continued to imprison Baha’is and prevent them from receiving higher 46 Education Report Amnesty International 2014 / 15, and also limited the rights of other religious minorities, as well as Azerbaijanis, Kurds and other ethnic minorities.”

“The appointment by President Rouhani of a special adviser on ethnic and religious minorities did not reduce the widespread discrimination of ethnic minority communities in Iran, including Ahwazi Arabs, Azeris, Baluchi, Kurds and Turkmen, or religious minorities, including Ahl Haq, Baha’is, Muslims who converted to Christianity, Sufis and Sunnis. Discrimination of national minorities impeded their access to basic services, such as normal living conditions, water and sewage, employment and education. National minorities were not allowed to use their language as an intermediary language in education, and they were denied adequate opportunities to learn it. ”

"According to October, the authorities kept on death row at least 33 Sunni, mostly members of the Kurdish minority, on charges of" holding meetings and conspiring against national security "," spreading propaganda against the existing system "," participating in factions Salafi "," spreading filth on the Earth "and" enmity with God. " Persecution for the transition from Shiism to Sunnism has tightened. ”

“In December, the authorities used threats of immediate execution and other harsh measures against 24 Kurdish prisoners who went on a hunger strike to protest conditions in the Urumia Central Prison, where they were held together with other prisoners.”

Absolute resonance deals with Iranian Kurd Saman Nasim. On suspicion of being a member of a terrorist organization, he was arrested in July 2011, and sentenced to death, despite the fact that the young man was only 17 years old. And this is despite the fact that the Iranian Republic is a state party to the Convention on the Rights of the Child and the International Covenant on Civil and Political Rights. And this is not an isolated case. Sentences of death in Iran in violation of all norms of international law are often made to minors. Moreover, they are being carried out, despite the appeals of human rights organizations, the prayers of relatives and friends. Needless to say that most of the charges against children remain unconfirmed? The Islamic Republic of Iran has the highest death penalty rating in the region.

Iranian policy of “personalization” of the Kurds is active not only within the country, but also abroad. Almost 30 years ago, the leader of Iranian Kurds and the Secretary General of the Democratic Party of Iran (Kurdistan Democratic Party) Abdul Rahman Kasemlu was killed. The incident occurred in Vienna during peace talks with the Iranian government. It has already been proven that Mahmoud Ahmadinejad is directly related to the planned assassination of Dr. Kasemlu and other influential Kurds of Iran. Kasemlu spent many years conducting a revolutionary national struggle by Iranian Kurds. A similar fate touched Sadiq Sharafkendi, who was killed in Germany.

An example of modernity: "The Iranian Democratic Party of Kurdistan" issued a statement announcing the murder of the former party commander, Mahmud Has, at his home in Norway. He is the former commander of the Peshmerga forces of the "Iranian Democratic Party of Kurdistan". According to the media, this is not the only incident faced by Iranian Kurdish opposition representatives abroad. Several other Iranian Kurdish politicians and officials have been killed in Europe in recent years by unknown assassins.

Thus, in their political position, the Kurds of Iran remain the most oppressed, and in their political activity - the most passive. It is clear that with the success of the Kurds in the Syrian war, with the revitalization of the Kurds in Turkey and the growth of Kurdish independence in Iraq, the Iranian authorities will pursue an even more radical national policy against the emergence or growth of separatist sentiments. The main thing that the Iranian Kurds should be focused on in the present period is the economic development of the Kurdish territories.