Turkish Gambit: I went to a familiar process

6 May 2016
85
Interesting information came from Turkey. So far, the Prime Minister of Turkey Ahmet Davutoglu decided to hold an extraordinary congress of his party Justice and Development Party (AKP), and announced that he would not run again in its chairmen. He said this after a meeting of the party executive committee. 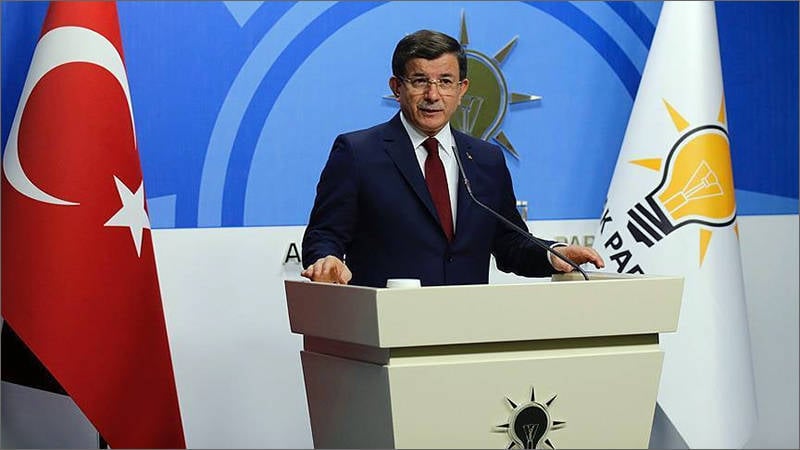 “Our party is entering a new stage of development. After consultations inside the AKP, I decided to hold an extraordinary congress on May 22. I never ran after the post. And I don’t think to become a candidate for party chairpersons in conditions where there is no agreement. I will not nominate nominee on the May 22 vote. "

The Turkish Prime Minister has traditionally become the head of the ruling party. In this regard, the new chairman of the AKP, which will be determined 22 May, is expected to will the formation of the next government of the republic.

But Ahmet Davutoglu leaves the post of chairman of the party, and will not run again. At the same time Davutoglu will continue to work in Parliament.

"I will not run for the presidency of the AKP at an extraordinary congress, but until the last moment I will continue my political struggle as a deputy of the AKP."

A sudden twist, is not it? And it is unclear what it is called. I agree that it is not just the prime stands up and goes away. In any case, this is preceded by some event. But, having looked good, I could not find at least some of the small scandal associated with Davutoglu. The rumors, nothing more.

They speak loudly (and slowly begin to write even in Turkey) that Davutoglu is a series of continuous disagreements with Erdogan. There are differences on the composition of the current government, the governing apparatus of the AKP. Moreover, Davutoglu recently lost his powers personally appoint the heads of regional branches of the AKP. This right has passed the executive committee of the party. At that Davutoglu and outlined its position further.

And they say that Erdogan is afraid of competition from Davutolgu. Not without reason, because his own position is not as strong and reliable as to the deterioration of relations with Russia.

And this rumor is confirmed, oddly enough, he Davutoglu.

"Whatever happens, I'll always be true to our relations with the president of his family -. This is my family, we often walked shoulder to shoulder, and I think any speculation about this inappropriate."

It is possible and believe. Friend, colleague and all that, at the request of the President leaves the well, by the way, well-deserved post refuses to run 22 May and content of the deputy chair. In which will continue their struggle.

To be honest, it looks like, again, Ukraine. And not quite Ukraine. In Ukraine it was not quite the Chairman of the People's Council, which is trying to continue fighting in the deputy chair, while in Ukraine was recently the Prime Minister. How many naborolsya one, we can tell quite clearly today about the second ... it is also necessary to find. Lost.

Roughly the same thing will happen with Davutoglu.
Not so long ago, in one of his statements, he said that the new Turkish constitution will be based on a presidential system. Here is the essence of all that is happening.

In today's Turkey, the president does not have such power and authority that are with the prime minister. Turkey - a parliamentary republic. Apparently, it was a time of great change. Erdogan need more power, otherwise it will have to forget about how may soon everyone will forget about the Davutoglu.

Ahmet Davutoglu is considered the chief architect of Turkey's foreign policy since the days of Ataturk. He was the author of the Turkish foreign policy doctrine of "zero problems with neighbors", which was designed using the tools of "soft power" to make Turkey a strong and influential regional power. And by the way, this doctrine has been implemented quite successfully.

Davutoglu has played a big role in that, since 2002 years, Turkey has repeatedly acted as a mediator in various regional conflicts - between Syria and Israel, Israel and Hamas, Fatah and Hamas.

However, the onset of the "Arab Spring" put all the political achievements of the end of Turkey. Active support Erdogan (then prime minister) Islamists of various stripes, including the "Muslim Brotherhood" in Egypt, Libya and Syria, rather damaged the political reputation of Turkey, rather than strengthened the Turkish position.

It makes sense to remember that then Davutoglu was the Minister of Foreign Affairs. And when Erdogan became president, he was elected to the post of prime minister.

And so it is the natural ending.

So, what do we have?

Davutoglu gave up without a fight. About he developed the concept of "zero problems with neighbors" can be forgotten. In Israel, according to local media, has long been forgotten. Syrian events only confirm this.

What 22 May SDP will elect a new chairman who will be engaged in the formation of a new government, it is clear. That it will be a person, pleasing Parteigenosse Erdogan (who is also a member of the AKP, of course), it is also clear as day.

And then? And all. Next, the new Turkish Constitution, which will be based on the president, rather than parliament.

I am sure that the vast majority of readers understand what will this Turkish Gambit. By the beginning of the great dream of Erdogan - the revival of the Ottoman Empire.

Ctrl Enter
Noticed oshЫbku Highlight text and press. Ctrl + Enter
We are
The bloody games of the Turkish "Sultan"Erdogan was left without a "brother"
Military Reviewin Yandex News
Military Reviewin Google News
85 comments
Information
Dear reader, to leave comments on the publication, you must sign in.