Completion of construction of a prototype BMK pr. 02630 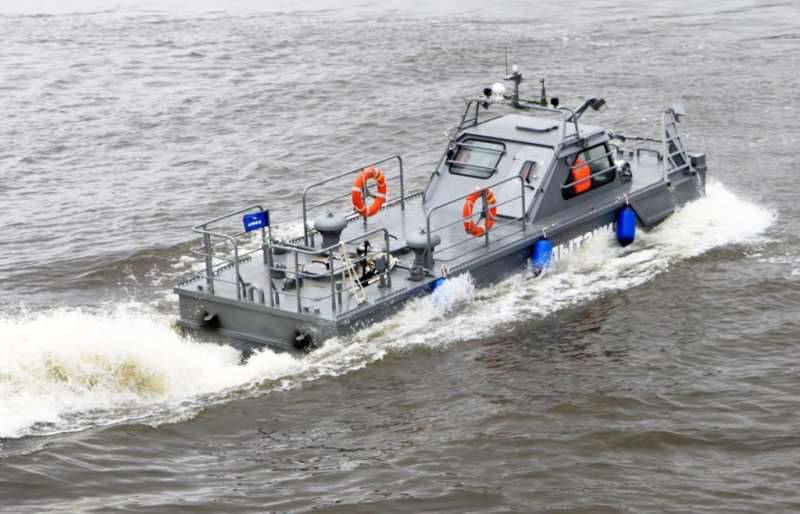 In April of this year, KAMPO JSC completed the construction of an experimental model of a tugboat (XBM) of the 02630 project as part of an initiative design and development work of the Russian Defense Ministry in accordance with the tactical and technical requirements of the engineering troops of the Armed Forces of the Russian Federation.

The design of the body of the BMC is made in accordance with the requirements of the rules of the Russian River Register. The hull of the boat has a high resistance to shock loads; all closures located on the deck and cabin of the BMK (door, hatches, removable sheets) have a waterproof design that allows the safe operation of the boat at a given wave level.

Compared with similar projects significantly improved the habitability of the boat and the conditions for servicing the mechanisms and systems located in the engine room. The wheelhouse of the BMK is soundproofed, has a range of means to ensure the climate and is much larger in comparison with logging of boats of previous generations.

Unlike the BMK of other projects, the boat has two diesel gear units (DRA) produced by our company.

The presence of two DRAs ensures reliable operation of the boat, which is important in conditions of high operational loads when using the boat for its intended purpose.

In the period from 25 to 27 in April 2016 in the city of Kolomna in the waters of the river. Oka prototype BMK successfully passed the first part of the preliminary tests, during which he fully confirmed the characteristics assigned to the TTZ.
During the tests were carried out:
 raising and lowering the boat from the pontoon car to the ground and to the water,
 checking speed and maneuverability,
 checking the work of the anchor and steering devices, ship systems, electrical equipment, communications and navigation.

April 27 held a demonstration of a tugboat to the command of the engineering troops of the RF Armed Forces, the leadership of the Central Research Institute of Engineering Troops of the Russian Ministry of Defense, the administration of the city district of Orekhovo-Zuyevo, employees of our company and the media.

The honorary right to cut the red ribbon was granted to the deputy head of the engineering troops of the RF Armed Forces, Colonel Ruslan Sabirovich Alahverdiyev, and the head of the city district of Orekhovo-Zuevo, Gennady Olegovich Panin.

After this solemn moment, all those invited were able to inspect the boat and get detailed comments from the shipbuilders of the company on the purpose and technical capabilities of the BMC, as well as take a boat trip.

The tugboat of the 02630 project received a positive assessment from representatives of the engineering troops of the RF Armed Forces. The habitability, maneuverability and speed characteristics of the boat were noted.

At the end of the solemn event, A. Yu. Kulik, Director for Strategic Development of KAMPO JSC, spoke about the purpose and technical features of the boat, noting the high demand of the Ministry of Defense for such boats.

In the fall of this year, the 02630 tugboat will be presented as part of the Ministry of Defense exposition at the Army-2016 International Military-Technical Forum, which will be held in Kubinka in Patriot Park.