Giant aircraft "Ruslan" no one needs 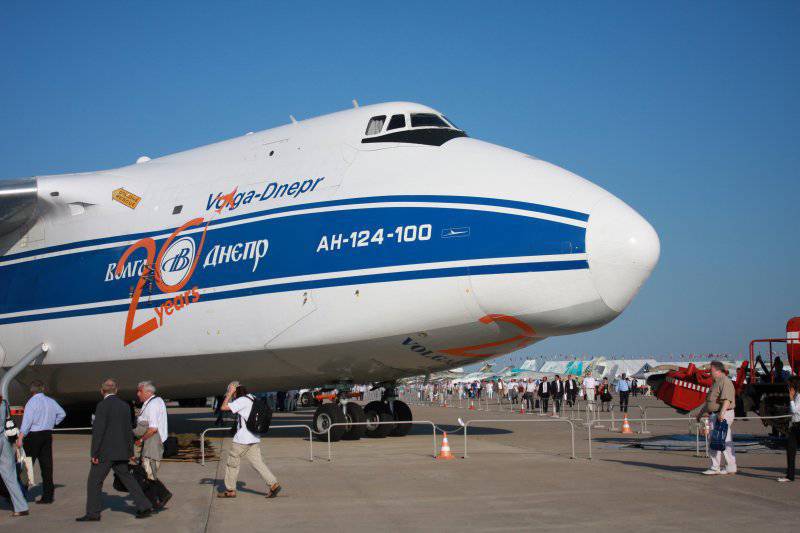 According to Izvestia, referring to the statement of Sergey Ivanov (Deputy Prime Minister), the resumption of production of giant transport production aircraft, such as the An-124 Ruslan, is estimated at least at 20 billion rubles. But for this to happen, you must first fulfill a number of conditions.

To begin with, you should receive an order for the manufacture of at least 60 aircraft, it will help recoup the costs. But now such an order has not yet been received, which means that it is meaningless to deploy the mentioned production. By the way, the estimated cost of each aircraft is about 300 million dollars, so the number of potential customers is much narrower.

According to information from S. Ivanov, the company Volga-Dnepr, recently expressed its intention to purchase up to 20 airplanes, about 20 military transport modernized An-124 wants to acquire the Defense Ministry, and also last year, 20 new Ruslan cars, wished buy and airline Voronezh "Flight".

And based on the explanations of Oleg Panteleev (the chief editor of the industry agency AviaPort), airline orders will not be able to sufficiently reduce the cost of the aircraft. By the way, on the world market, there is only one theoretical buyer of these aircraft - this is the United States of America.

A source from the UAC (United Aircraft Corporation) commented: “In addition, the characteristics of the aircraft for military and civilian customers have significant differences, which means that in order to fulfill orders in both cases, you need to cost 2 different aircraft, which is quite obvious, final cost. "

There is another problem in this matter, namely: the settlement of relations with Ukraine. In other words, the aforementioned country claims to be the successor of the copyright to all the design documentation of the Ruslan aircraft. The establishment of royalties depends on the decision that will be made later. It will also take many years to transfer design information from paper sheets to electronic media.
An-124 «Ruslan"

NATO uses a different codification for it - “Condor” (“Condor”). This is a Soviet Russian-Ukrainian transport aircraft, which is considered the largest mass-produced serial aircraft in terms of carrying capacity in the world. It was developed in the OKB. Antonov, for the delivery of troops with weapons and combat standard equipment from the rear to the front, as well as for transportation to anywhere in the world, bulky cargo.

It is known that on December 26, 1982, the first flight of an experimental aircraft took place. In 1985, this machine was first presented at the air show in Paris. In 1986, Aeroflot began operating the aircraft. For the most part, the airliner worked in Siberian airlines, transporting unusually large cargoes used for industrial development of oil and gas. And only in 1987, cars began to enter the service of transport aviation Air Force

In the middle of the 1990s, all production of Ruslan aircraft in Russia was halted. And only 10 of December 2009 of the year, Dmitry Medvedev (President of the Russian Federation), ordered the government to make a purchase for the Russian Air Force, 20 units An-124, for the period up to 2020 of the year to the state armament program. In addition, up to 2015, the 22 units of the An-124 BTA Ministry of Defense of the Russian Federation will be upgraded. This upgrade includes an upgrade of the wing and fuselage, the replacement of the navigation system, avionics, parts of the onboard units, the chassis, as well as an increase in payload.
Ctrl Enter
Noticed oshЫbku Highlight text and press. Ctrl + Enter
We are
Russian-Ukrainian rocket "Dnepr" broke through the emerging space blockade
38 comments
Information
Dear reader, to leave comments on the publication, you must to register.