New AMRAAMs at the Australian Air Force and the balance of power in the APR: a foreseeable trend 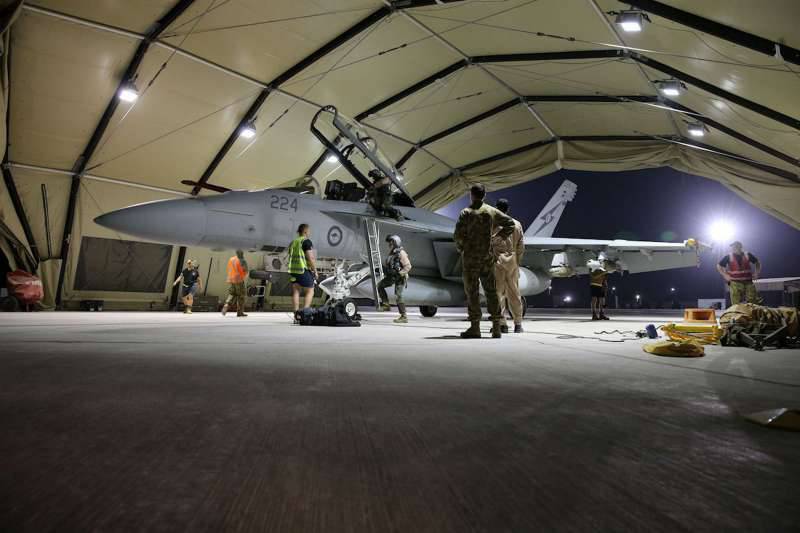 The approval of the next possible defense contract by the US Department of State for the supply of a large batch of 450 long-range AIM-120D air-to-air missiles by the friendly Royal Air Force of Australia caused the appearance of yet another "tales" and myths in the media. One of these "storytellers" was news asdnews.com agency, which claims that this modification of AMRAAM will not in any way affect the balance of power in the Asia-Pacific region, which cannot but lead to serious thoughts.

In previous articles, we have many times addressed the issue of turning Australia into a huge bridgehead of the American military-strategic concept aimed at dominating the IATR (Indo-Asian-Pacific region). This happens both for the Americans to control the movement of enemy submarine and surface fleets at the global level, and directly to contain the Chinese concept of the "three chains". The latter was developed by the PLA command to suppress joint anti-Chinese actions by the United Naval Forces of the United States, Japan, South Korea, Vietnam and Australia within 3 borders: Spratly - Philippines - Okinawa, Guam - Saipan, Hawaii. In order for the Chinese concept not to have high strategic importance, the Americans found an asymmetric answer in the form of a transfer of the B-1B "Lancer" strategic bombers and several strategic refueling vessels KS-10A to the Australian air base Tyndall to "bring fear" to the coastal sites of the Celestial Empire, including unique economic zones, objects fleet, high-tech infrastructure, etc. But the PLA's response capabilities are impressive today.

First, there are several dozen Dongfeng 4 MRBMs capable of reaching the territory of American air bases in Australia. The missiles are being modernized and possess a modern complex of means for overcoming the enemy’s missile defense system, which does not give 100% guarantees for interception by the American THAAD and ship shipboard Aegis installed on Hobart class Australian destroyers, which in the future will defend the northern part of Australia. Secondly, they are not on the job to increase the range of Chinese strategic cruise missiles of the CJ-10K / 20K family (their range reaches 3000 km), as well as to develop a 5 supersonic strategic rocket carrier capable of delivering these TFRs to the coast of Australia. for 2-3 hours.

Thirdly, a similar air counterattack by the Chinese Air Force using a promising strategic aviation It will be supported by carrier-based fighter aircraft in the form of more than 100 modern J-15S and deck versions of the inconspicuous J-31, based on the Liaoning aircraft carrier (the former Varyag) and the aircraft carrier Ave. 001A being built at the Dalian shipyard today. Deck fighters will equip radar with AFAR and promising long-range aerial combat missiles. It is for this reason that we are witnessing today the rearmament of the AIM-120D AMRAAM missiles.

As is known, the Royal Australian Air Force has the F / A-54A "Hornet", 18 F / A-17B "Hornet", 18 F / A-24F "Super Hornet" and 18 fighter-suppressing airplanes armed with 12 fighter-bomber. / A-18G Growler, also in force for the 100 F-35A contract. But armed with the "Hornets" and "Super Hornets" all the time consisted of AIM-120C missiles, which are now beginning to become morally and technically obsolete.

The range of the AIM-120C version is just 105 - 110 km, which will not allow either the Super Hornet or the Lightning to display the high qualities of the AN / APG-79 and AN / APG-81 radar in the fight against modern Chinese deck aircraft, especially due to the fact that the People's Republic of China with the purchase of Su-35C will receive the production technology of the Irbis-E radar H035. AIM-120D is a brand new product. The AMRAAM-2 range (the second name is AIM-120D) is 160 km, the flight speed approaches the 5M, and the active radar homing system has a more sophisticated targeting algorithm. It is known that already in the 7 test, this missile struck an air target with a direct hit, which indicates the ability to intercept small cruise missiles. Also at the frontiers of detection and “capture” of inconspicuous fighters with on-board radars of the above types (70 - 100 km), AMRAAM-2 will maintain excellent maneuverability due to the high energy capabilities of turbojet engines of increased thrust and operating time.

Despite its very compact dimensions, the AIM-120D (another additional name of the AIM-120C-8) has a range comparable to the heavy Phoenix AIM-54C interceptor missile used on board the deck-based fighter-bombers F-14A / D also comparable to the air-to-air missile of the MBDA Meteor consortium.

The presence of the AIM-120D in service with the Australian Air Force will almost 1,5-2 times increase the tactical potential of the existing 4 ++ generation multi-role fighters in intercepting and gaining air superiority: high-altitude high-speed targets can be intercepted at distances over 70-80 km , and ultra-small targets that are inaccessible for detection by radar systems of fighters at a significant distance can be intercepted by target designation of AWACS aircraft (the Australian Air Force is armed with 6 AWACS Boeing 737AEW & C aircraft).

And therefore, all statements regarding the preservation of the existing balance of power in the APR after the acquisition of AIM-120D by Australia are nothing more than blatant lies and misinformation of a simple and uninformed technical observer.