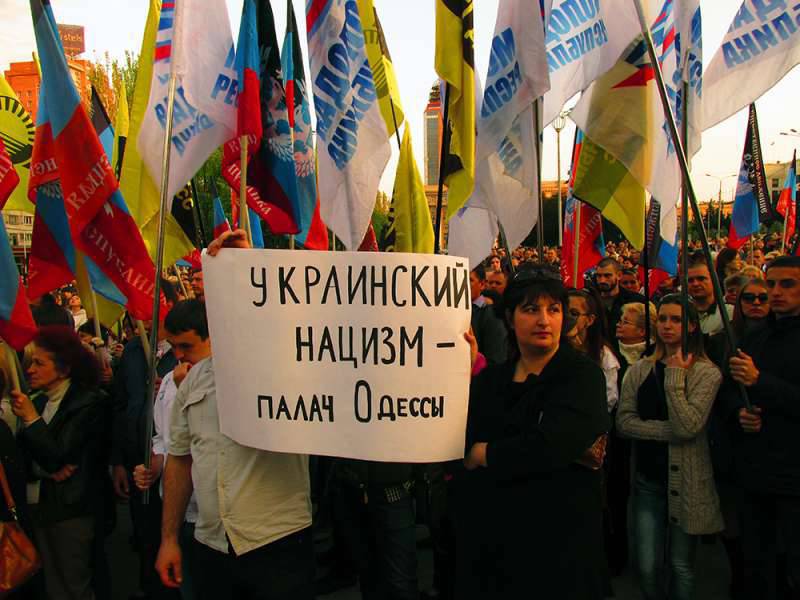 Three cities have become the main symbols of the “Russian Spring”, three cities are those with which they express solidarity throughout the world. Two of them - Donetsk and Lugansk - are today's winners. These are the cities that have won and managed in the most severe conditions to defend their Victory. And one city is today a city-martyr, a city burned on an ukroinquisite fire. The hero-city of Odessa is now a symbol of suffering. And the 2 events of May 2014 will be forever entered into history like Odessa Khatyn.

Even a few days before the second anniversary of the terrible tragedy, Odessa looked like an occupied city from a film about the fascists. Heavy armored vehicles, policemen with shepherd dogs, Nazi thugs in large numbers ... The junta, as well as its supporters from the pro-fascist organizations, threw all their forces precisely on this city - so they were afraid of people who intended to honor the memory of those who fell in the fiery hell of the House of Trade Unions ...

Odessans still came. Thousands of people brought flowers. Kulikovo Pole was suddenly “mined” (absurd - how can you put an explosive device if the whole place of the tragedy was surrounded by policemen with sheepdogs?) But - what a good excuse not to let the bereaved! "Looking for" a non-existent bomb. Meanwhile, people were putting flowers at the feet of the police. Built an improvised memorial. Despite the gathering of the Nazis, they chanted: “Donbass, we are with you!”

In that hell of waiting and anxiety, arranged by the authorities, some people became ill, they were taken to the ambulance. Two dead are reported.

In Kherson, the participants of the action of solidarity with Odessa were attacked by the Nazis of "Azov". This happened in the Potemkin Square, where dozens of brave people gathered who brought flowers and light bulbs. Neo-fascists destroyed a fragile people's memorial, shouted to people to “go to Russia” ...

And the notorious Mosiychuk considers the 2 of May as a festive day.

But, since the residents of Odessa and the Ukrainians were not given a worthy mournful anniversary, since they were forced to do so with a threat to life - this was done by people in other countries. It is reported about the actions of solidarity in Britain, Germany, Holland, Belgium, Greece. Such actions took place in many cities of Russia, including Moscow and Sevastopol.

Of course, the Donbass could not stand aside.

In the evening, thousands of people gathered on Lenin Square. There were stands with the names of the victims, with a small but terrible photo exhibition. There were a lot of flowers and candles. And they all carried and carried ... 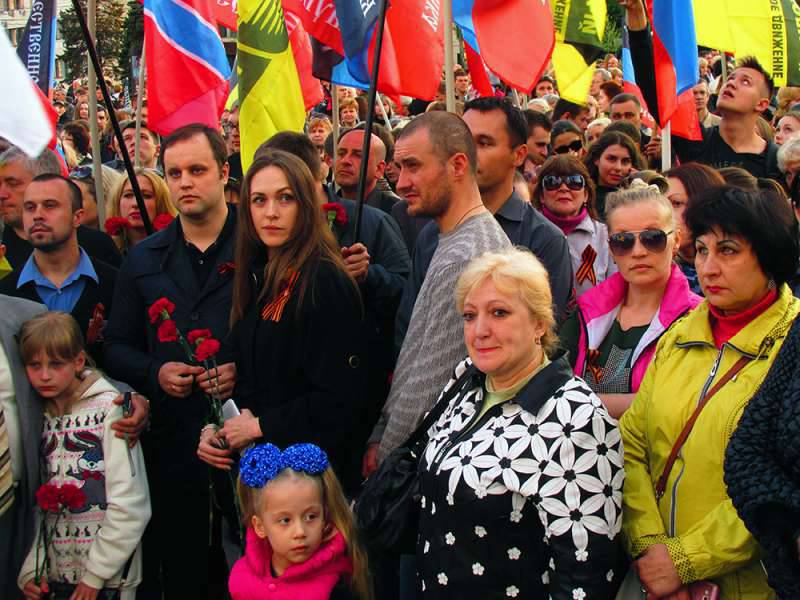 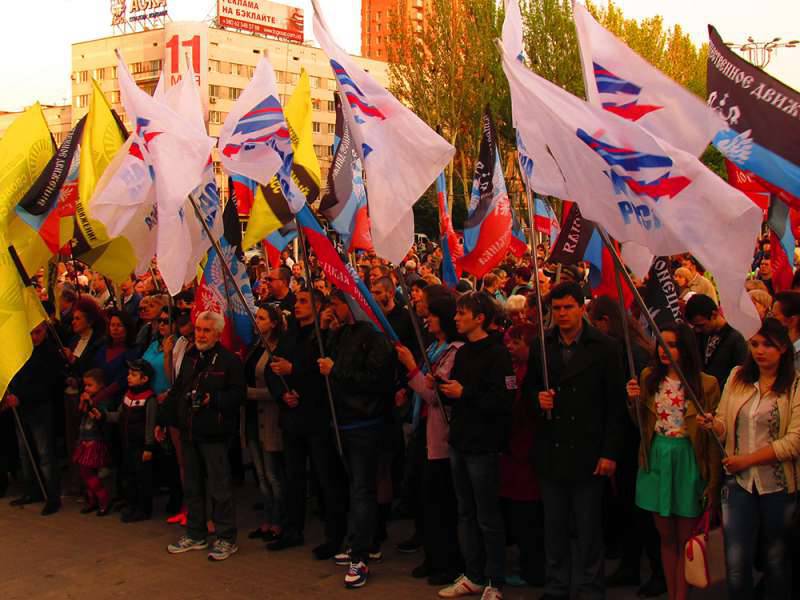 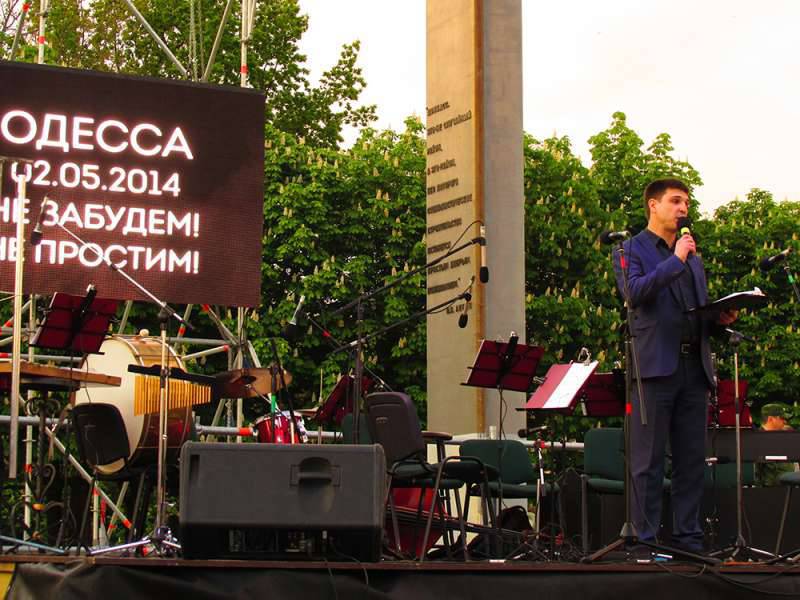 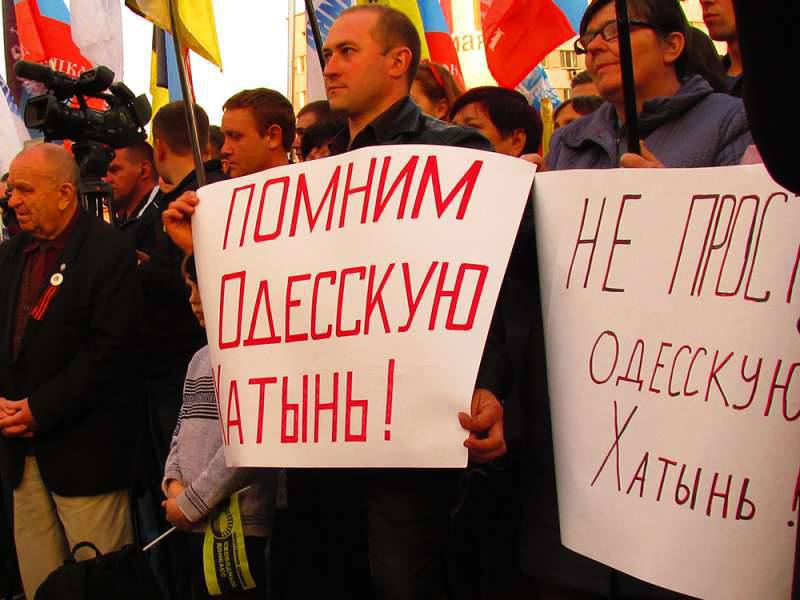 The head of the DPR, Alexander Zakharchenko, could not attend in person. He addressed the crowd from the screen. He stated: “It was not for nothing that Odessa was chosen - it is a hero-city, which repulsed the Nazis. Two years ago, the new owners of Ukraine decided to arrange a campaign of intimidation. People who had dared to rebel against the new Ukrainian government were first burned, and then those who were implicated began to be judged for this crime, but those who suffered and survived. Today, the Bandera Kiev authorities are not calming down. The Georgian governor calls for help in the fight against those who want to honor the memory of their loved ones, the national guard. The Nazis promise to disrupt memorable events. All that I can wish to Odessans is to hold on. Nobody is forgotten and nothing is forgotten. ” 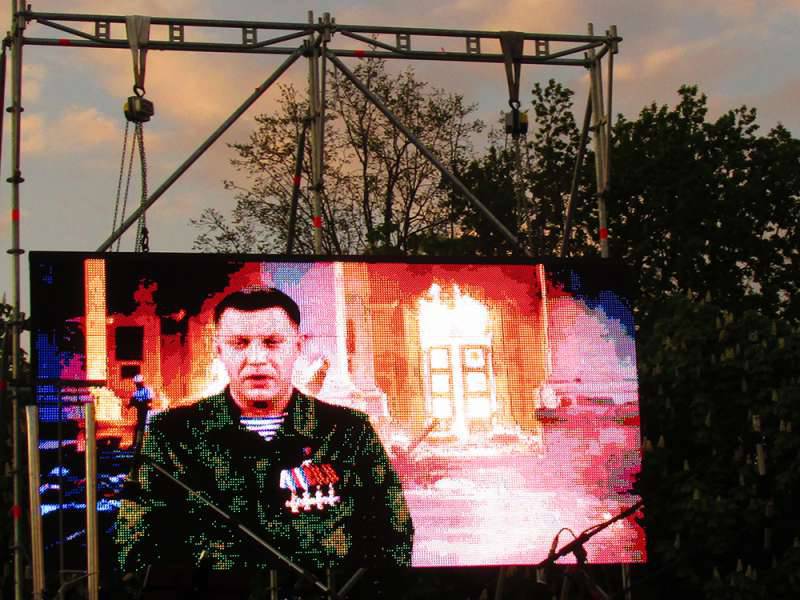 (It should be noted that a few days before that, Zakharchenko himself almost fell victim to the assassination attempt, which they tried to arrange on the personal order of Mr. Poroshenko. Fortunately, the crime was succeeded in foiling).

The children launched white doves into the sky. Flags bowed in a minute of silence. Candles were glowing, cool flowers were kept in memory ... Above the square sounded Mozart's Requiem ... 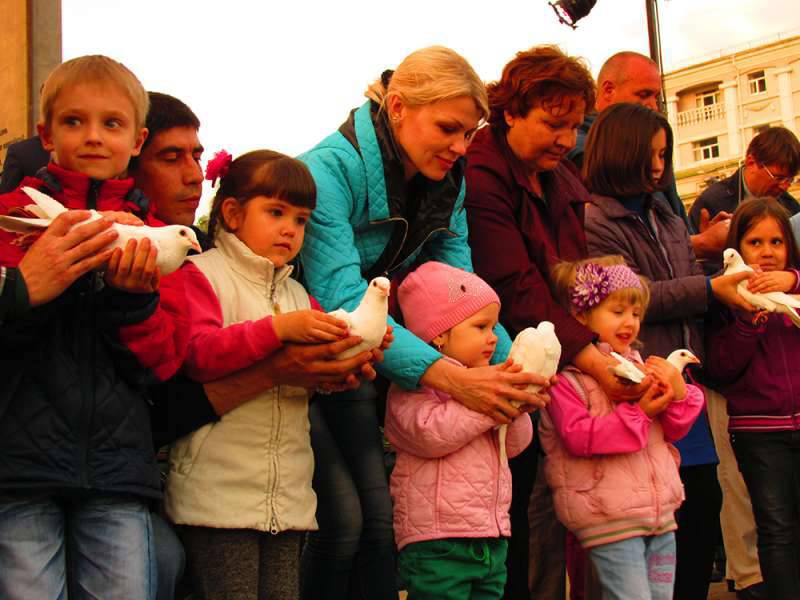 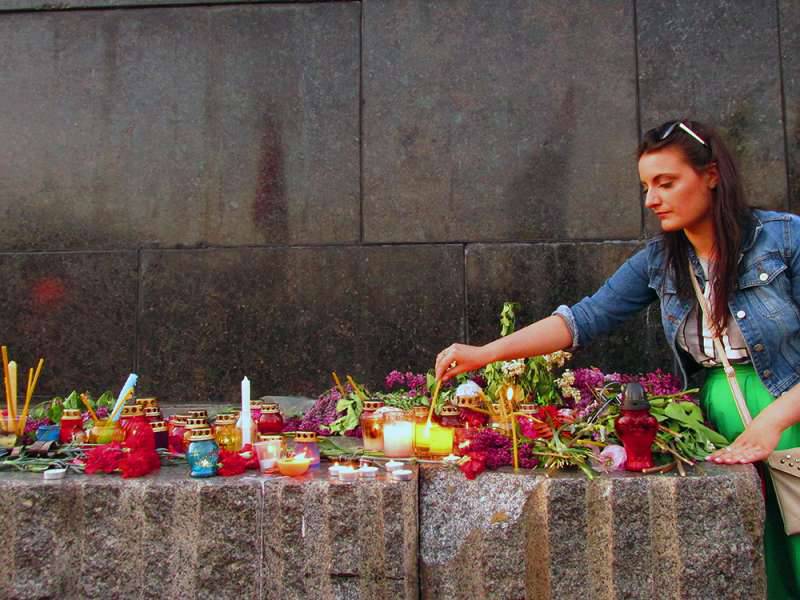 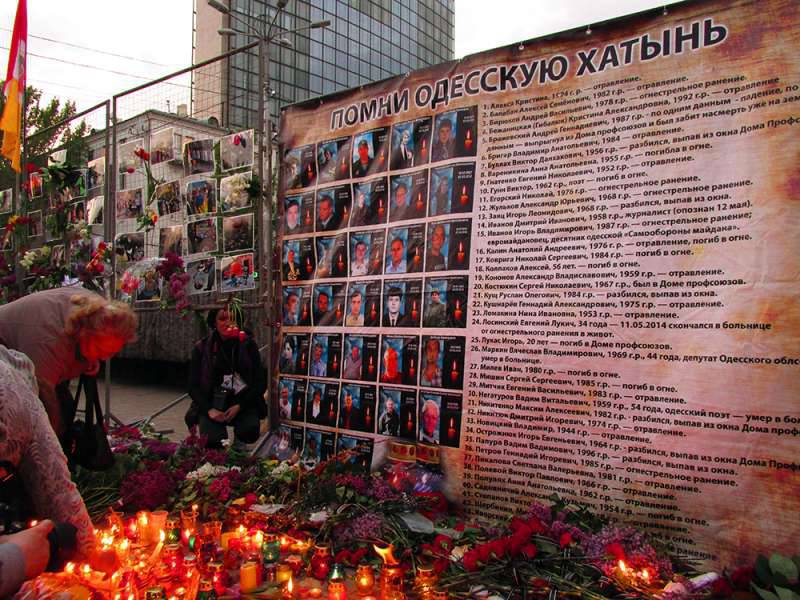 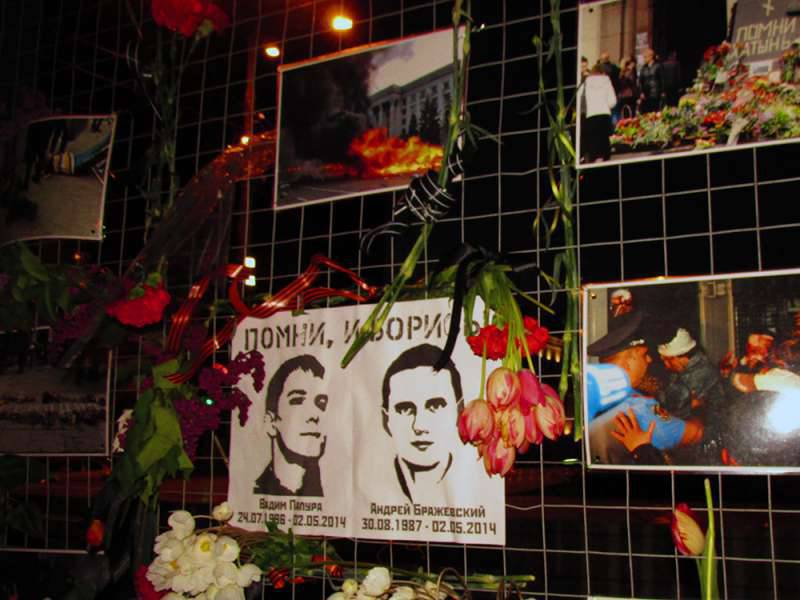 On this day, other mourning events took place in Donetsk. Thus, in the Union of Writers of the DPR, a poetic evening dedicated to the memory of two poets who perished on 2 in May on 2014, Vadim Negaturov and Viktor Gunn, was held. People also went to temples to commemorate the fallen.

And on the eve of May Day, Donetsk celebrated Easter and the Day of International Solidarity of Workers. Tens of thousands of people passed from the former RSA building (now the Government House) to the same Lenin Square. Banners of Victory are side by side with the flags of New Russia and the DNI. 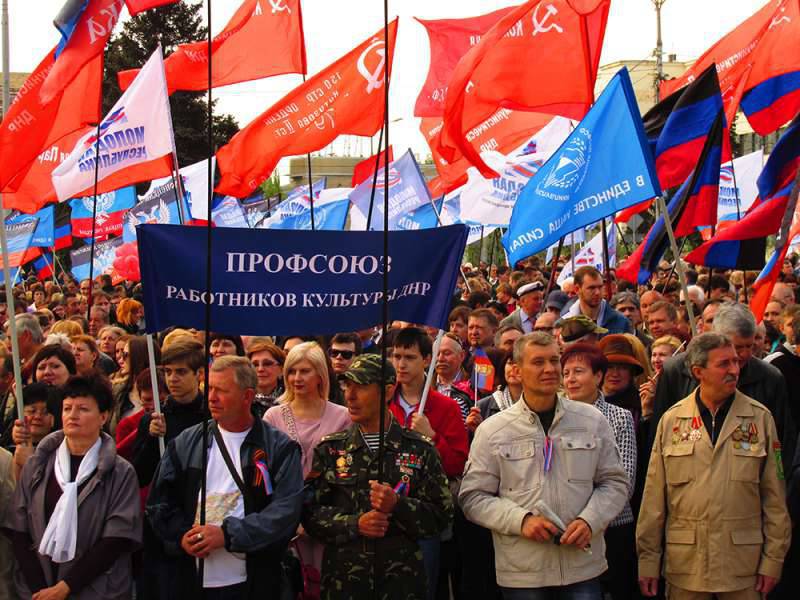 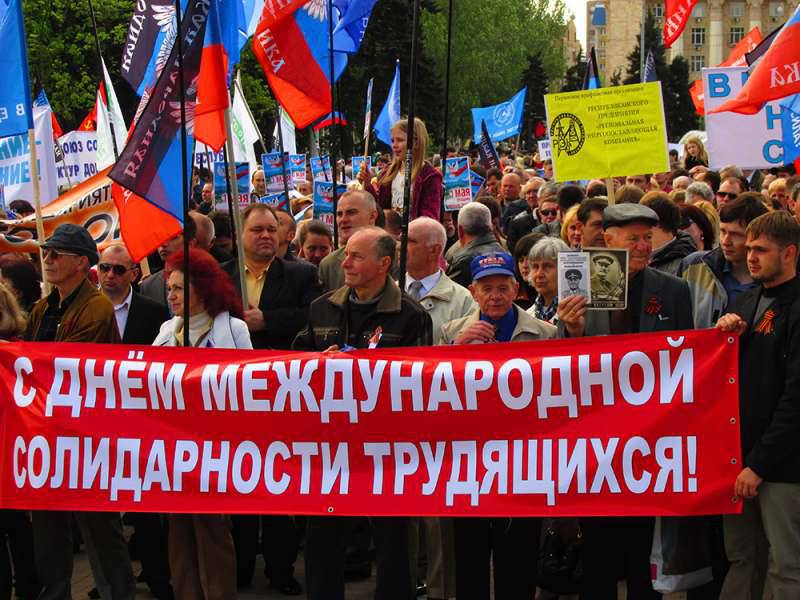 And one of the most famous ukrokrateley, Arsen Avakov, proud of what is not clear, summed up the first in Ukraine. He is proud that, for example, in Dnepropetrovsk 25 people participated in the May Day demonstration under the protection of 193 police officers, in Kiev - 30 people and 60 police officers, and in Kharkov they didn’t manage to hold a rally at all. This, perhaps, will be more severe than in the days of the royal secret police.

He and his “colleagues” in the new fascism need not rejoice. Because there are people who, in spite of all this terror, despite the total superiority of the forces of the enemy, still took to the streets.

And the junta lost the spiritual battle for Odessa completely. Because thousands of people, in spite of intimidation, despite the armed neo-Nazi militants who arrived in the city, still took to the streets of 2 on May - the day of Khatyn of the 21 of the 20th century.

Ctrl Enter
Noticed oshЫbku Highlight text and press. Ctrl + Enter
We are
Zakharchenko in Debaltseve: "This city for us is a symbol of resilience, a symbol of struggle"Armored vehicles of Yugoslavia. Part of 6. Wars in the ruins. Bosnia and Herzegovina. Kosovo. Macedonia
Military Reviewin Yandex News
Military Reviewin Google News
36 comments
Information
Dear reader, to leave comments on the publication, you must sign in.