US hegemony in numbers and dynamics: Trump's doctrine is quite rational 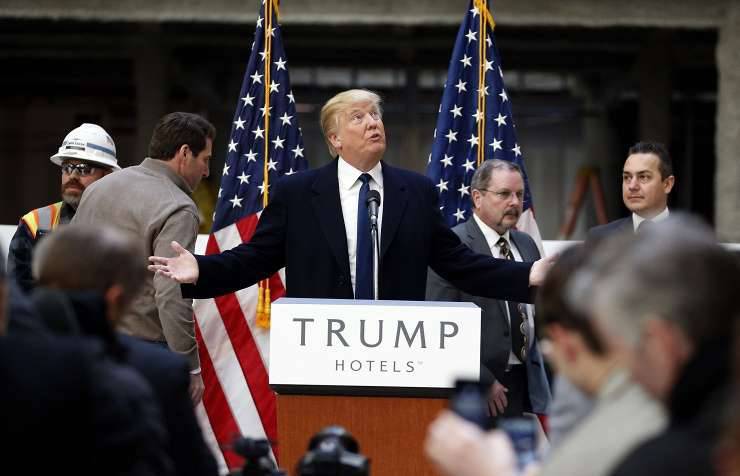 So, Donald Trump actually voiced his foreign policy doctrine. Its main provisions, in fact, are as follows:

2. The search for a compromise with other major independent players - and the rejection of the tactics of "those who are not with us are against us."

3. Restriction of the practice of interventionism.

4. Disposal of “freeloaders” —that is, “clients” who passively “consume” American security.

In general, this is a completely natural reaction to the “successes” of the American foreign policy of the last 13 years. For $ 807 billion only direct costs, not counting the comparable costs for social security of veterans, it was possible:

- bring the pro-Iranian regime to power in Iraq and create a “Shiite crescent” hanging over the Middle East,

- according to the results of the “Arab Spring” - to get a much less pro-American military regime in Egypt,

- chaos in Libya and Syria instead of increasing oil supplies and creating new transit opportunities.

Finally, as a result of conflicts, to get an army that is much weaker than it could have been - while strengthening its own competitors. In other words, the current policy — which the US intends to persevere — looks increasingly inadequate.

In general, Trump's “message” comes down to the fact that the States cannot play the role they are trying to assume. The fact that he is right, it is easy enough to make sure just by looking at the dynamics of the US share in world industrial production.

Now back to 1913. The share of the then hegemon - Britain - in global industrial production was 13,6% - 14%, while in Germany it was more, reaching 14,8% - 15,7%. In other words, the “long twentieth century” - he, by and large, is American - has ended. One way or another, the world has "rolled down" in the era of the classic "concert of powers", and the United States technically cannot afford to behave as if they have 40% of global industrial production.

Unbridled interventionism and attempts to stifle any alternative centers of power simply because they exist are expensive. Moreover, in the first case, often there is not enough resources to consolidate the results, and the second is simply unrealistic. Finally, such a policy weakens its own instrument - the “empire”, which has taken an unbearable burden, sooner or later discovers problems with power potential. So, aviation the most actively fighting marine corps, is in a peculiar state: out of 276 F / A-18 Hornet fighters, only about 30% are ready to perform combat missions. Of the 147 CH-53E Super Stallion helicopters, only 42 are operational.

At the same time, the domination of the States, although disputed by the Soviet Union, since the 70s, was very much supported by the efforts of the allies. Thus, at the Central European Theater of Operations, the Bundeswehr units made up 50% of the ground forces, 30% of aviation. Now the free world as a whole still controls the order of 40% of industrial production, but the contribution of the “younger brothers” to the total military power is incomparable with the American one. So, the current EU is absolutely loyal to the USA - and almost absolutely useless for them. Until the signing of the Transatlantic Partnership Agreement - if it takes place in the “American” format - the European Union is not the most convenient facility for operation and at the same time an undoubted competitor.

As military allies, key EU countries have virtually declared an “Italian strike.” With GDP, even slightly larger than that of the United States, Europe contains one aircraft carrier. On land and in the air, the situation is approximately the same. As a typical example, from 400 thousand Bundeswehr with 2,1 thousand tanks 185 thousand left with 328 cars; Of the 119 new Typhoon fighters, as of December, only 55 were capable of completing combat missions.

Moreover, if the United States has the military budget in GDP of 3,3%, then France has 2,1%, Britain — 2%, Germany — 1,2% and Italy 1,3%. Allies in the east often do not behave better - for example, the share of the military budget in Japan’s GDP is 1%. Canada maintains roughly the same level of military spending. In other words, Trump's “stop feeding the EU” slogan is understandable.

Thus, the military-political part of the strategy of the US presidential candidate Donald Trump looks like this: to moderate military activity, to shift some of the security costs to the allies and to the released funds to reanimate absolute power superiority. The problem is that, in contrast to the “strategy” of the current elite, rushing into senseless and merciless battles, it is quite rational and able to consolidate American domination for a long time.

Ctrl Enter
Noticed oshЫbku Highlight text and press. Ctrl + Enter
We are
The world we leave, the world we enter, and the world between themMilitary reform as an integral part of the security concept of the Russian Federation: Systematic dynamic assessment
Military Reviewin Yandex News
Military Reviewin Google News
94 comments
Information
Dear reader, to leave comments on the publication, you must sign in.