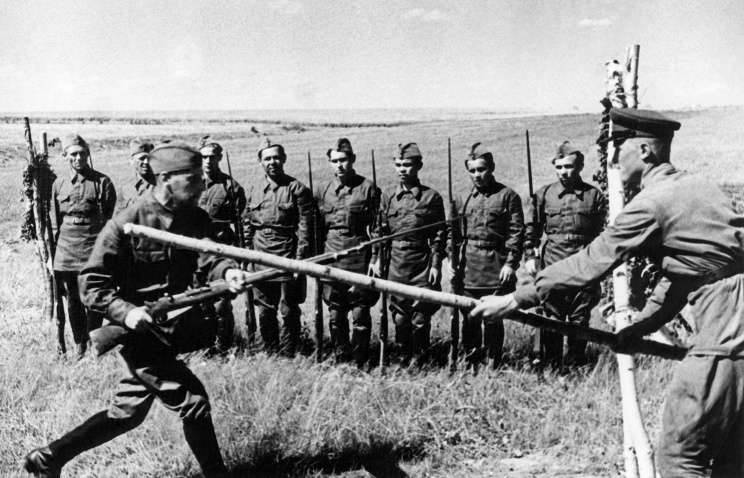 The 28 of April marks the 125 anniversary since the Russian army adopted the "three-line rifle of the 1891 model of the year" - a magazine rifle of the 7,62 caliber mm designed by Sergey Mosin.


This is a small weapon It was widely used during the Russian-Japanese, First World, Civil and Great Patriotic Wars, more than half a century was in service with the Russian Empire and the USSR. Sniper variants of this rifle are still used, including in armed conflict in Syria.

Adopted by the Russian army in 1867-1870. The two types of Hiram Berdan rifle system (“riders”) were single-shot — after the shot, the weapon had to be reloaded manually.

In 1882, the Main Artillery Directorate of the Military Ministry of the Russian Empire set the task of developing a “repetitive” (multiply charged) rifle. To conduct the relevant competition, the Commission on the Testing of Store Guns was created, which considered both fundamentally new systems and attempts to adapt the magazine for several cartridges to the Berdan system.

One of such projects in 1883 was proposed by Captain Sergey Mosin, the head of the tool shop at the Tula Arms Plant, but the commission finally found attempts to improve the jerkiness to be unpromising.

In 1883-1889 various rifle systems were considered. In 1889, Sergei Mosin proposed a new rifle caliber 7,62 mm for the competition (in the old measures of length - three Russian lines, hence the name "three-line").

In the same year, the commission received a competitive offer from the Belgian Leon Nagant - a rifle caliber 8 mm. The organizers of the competition developed a technical task, proposing Mosin and Nagan to refine their systems under the established requirements.

According to the results of comparative tests of the samples obtained in 1891, the commission chose Mosin’s “three-way” Mosin, deciding, however, to substantially change and supplement the design - including elements borrowed from Leon Nagant, who sold patents, drawings and patterns to the Russian side competitive rifle.

In addition, the design was amended by members of the commission - Colonel Petrov and Staff Captain Savosyanov, as well as Colonel Rogovtsev, who developed a "trilinear" blunt cartridge with smokeless powder. 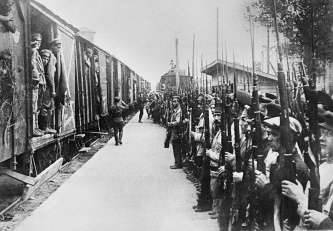 Echelon with the Red Army goes to the front, 1918 year
© Photo Chronicle TASS
28 April (16 April old style) 1891, by decree of Emperor Alexander III, the Russian army adopted a "three-line rifle of the 1891 model of the year." Since the group of specialists was responsible for the development, it was considered incorrect to fix only one surname in the name of the rifle.
Sergei Mosin was awarded the Order of St. Anne II degree and the Great Mikhailovsky Prize "for outstanding developments in artillery and rifle units", the copyrights to the elements of the developed weapon were retained.

Only after upgrading 1930 will it be referred to as the "Mosin three-line rifle of the 1891 / 1930 model." In Western sources, the name Mosin-Nagant rifle is also common.

Characteristics of the "trilinea" sample 1891 g .:

The advantages of a rifle:

Release and combat use

The production of the trilinek started in 1892-1893. at Tula, Izhevsk and Sestroretsky weapons factories. Initially, infantry and cavalry (with a shortened barrel) variants were produced, in 1907, a short barrel carbine was added to them.

According to various sources, for the first time the Russian military used a three-line design under combat conditions:

At the time of the entry of the Russian Empire into the First World War, the Russian army was armed with 4 million 519 thousand 700 "trilineas", and a small part of them was produced in the United States.

After the war, the issue continued in the USSR, Finland, Poland and others produced their modernized versions. Mosin rifles were in service with various 30 countries over the years. In Belarus, the “trilinek” was officially decommissioned only in 2005. The Karabin Mosin can be used in the FSUE “Okhrana” system of the Ministry of the Interior of Russia. 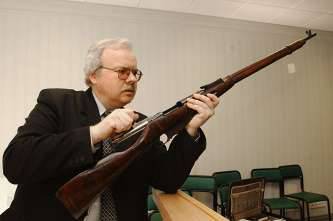 The guardian of the fund of weapons Roman Sheparev demonstrates the "three-line"
© Yuri Mashkov / TASS
During the upgrades, the rifle acquired a wooden cover to protect the hands of the shooter.
In 1910, a three-lane version was developed for a cartridge with a pointed bullet (the sighting range increased to 2 thousand 276 m).
In 1930, the sights and the method of fastening the bayonet are changed, a new holder has been applied.
A sniper version with a telescopic sight (1932), a modified carbine (1938) appeared.
Rifle sample 1891 / 1930's. It was produced until January 1944 g. (according to other data - until the beginning of 1945), a carbine of the 1944 model - up to the adoption of a Kalashnikov assault rifle in 1949 g.
In 1959, the Izhevsk plant produced a batch of carbines for the needs of private security, and the USSR also launched production of a variety of civilian and sporting rifle modifications, some of which are made in the Russian Federation at the present time.
In addition, sniper rifle versions are available in Russia, Ukraine and in some other countries - with a telescopic sight, bipod, flame arrester and a damped butt.