Information of the Russian Center for Reconciliation in Syria

April 29 2016
7
Over the past day, the ceasefire regime in Syria was broken 8 times, opposition forces opened fire on the positions of government troops and settlements in the provinces of Aleppo and Damascus, the Russian Conciliation Center bulletin said on the website Ministry of Defence. 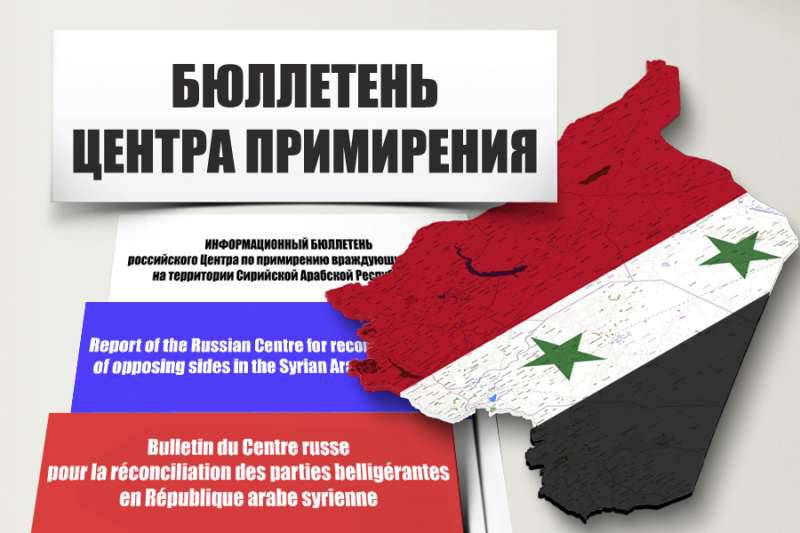 The truce continued to be violated by the Ahrar al-Sham, Syrian Free Army, and Jaish al-Islam groups.

It is also reported about the incessant shelling of the UAR army by the Jabhat al-Nusra terrorist group. Data on the victims is not given.

Work continues on the provision of humanitarian aid:

“3 tons of humanitarian aid were transferred to the settlements of Al-Ghazbiya and Al-Yamamam, Homs province.

Medical personnel from the Center for Reconciliation provided 36 medical assistance to local residents.

The formation of humanitarian convoys for residents of two settlements in the province of Hama continues.

In the liberated cities, restoration work is underway:

“The repair teams of Syrian builders in the city of El Qaryatayin, Homs province, cleared the rubble of 22 meters of streets within 24 hours and restored the 200 meters of power lines. Demining 5 land mines.

In the village of ABTIN in the province of Aleppo, work is underway to restore the water supply system and the electricity supply. 320 families have returned to their homes in this village. ”

Ctrl Enter
Noticed oshЫbku Highlight text and press. Ctrl + Enter
We are
Russian Conciliation Center on the situation in SyriaReports from the militia of New Russia for 7 September 2014 of the year
Military Reviewin Yandex News
Military Reviewin Google News
7 comments
Information
Dear reader, to leave comments on the publication, you must sign in.