April 29 2016
139
Recently, the specialists of the Ukrainian Center for Economic and Political Studies im.Alexander Razumkov a remarkable sociological survey was conducted, during which citizens of various regions of Ukraine were invited to comment on the topic of Donetsk and Lugansk People’s Republics. Respondents were asked a question of the following nature:

How do you rate the DNI and LC?

Before presenting the results of the survey, it is necessary to make an important remark: Ukrainian funds and sociological monitoring services, which follow the guidelines of the Maidan authorities of Ukraine, strive to separate the very concepts of “DNR” and “LPR” from the territory they occupy and from that population which lives in these territories. That is, there is the initial premise that the DNI and the LC - as if something "outside", "having nothing to do with the processes occurring in Ukraine itself."

Such logic is easily explained. After all, if Kiev is trying to artificially separate the DPR and the LPR from those events that actually started the large-scale anti-Maidan movement, it means that it is trying to drive into the minds of ordinary Ukrainians a false message that the appearance of the DPR and LNR cannot be considered the answer of the Southeast Ukraine on Maidan obscurantism of Kiev itself. They say that we have nothing to do with it at all ... It has grown by itself ... So tell us, how do you feel about these “growths on the body of an exclusively independent Ukraine”?

It was with such a promise that a survey was conducted among the citizens of Ukraine with the results expected in advance by the representatives of the Razumkov Center.
As suggested by the said center, the answers to the question “How do you rate DNR and LC?” Were as follows: 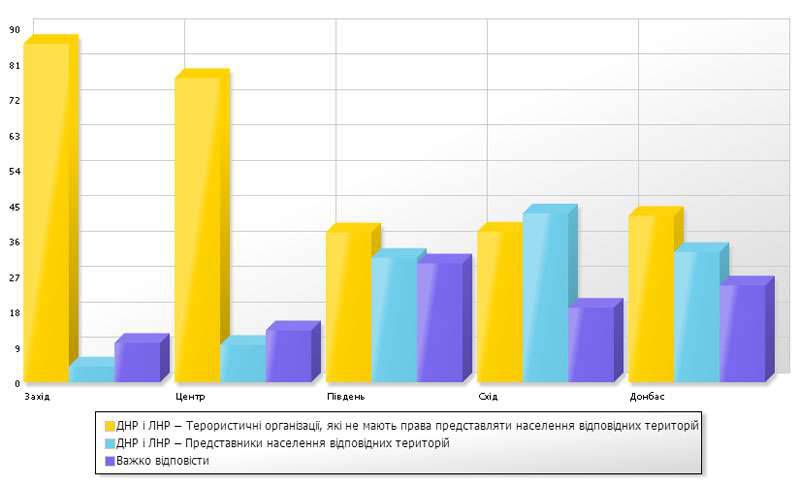 Such results make it clear that any survey in modern Ukraine is more like not an objective case study, but a test for respondents. The people in Ukraine are intimidated to such an extent that it is not a question of people being ready to tell any person with a notebook in their hands or a microphone about their real views on the situation in the country. No, of course, there are those who are ready to express everything that he thinks about both the Ukrainian authorities, and about questions with results prepared in advance by the same Ukrainian authorities. But there are few of them. Most expect both checks on adherence to the ideals of Maidan (checks on lice) and are forced, as they say, to sit quieter than water and below the grass and, gritting their teeth, agree with any manifestations of Kiev insanity and obscurantism. “Though with the mobilization of criminals (about which on the TV channel 112 Ukraine on the eve told people's deputy Tymchuk”), at least with a threefold increase in tariffs in order to provide the IMF with the next tranche and its subsequent looting by Ukrainian oligarchs. And after all it’s necessary: ​​more than two years ago, for the hundredth part of the oligarchic lawlessness that is happening in Ukraine today, people threw everything and went to the Maidan, and now - ti-shi-na ... Unless, they will set fire to one tire, and going home ... And if a rally or protest rally, more impressive in terms of its composition and performance, happens, then here’s one end - you don’t have a hard time eating home. Well, do not give under this now cookies, do not give.

The same Razumkov Center asked the Ukrainians about whether they consider it necessary to maintain at least some economic ties with the DPR and the LPR. 45,9% of respondents said that all economic contacts should be stopped, including the purchase of coal, payment of pensions and benefits. At the same time, about 45,5% also stated that those who supported the idea of ​​rapprochement with Russia should be deprived of Ukrainian citizenship. And again, the rest either “found it difficult to answer” or spoke out against such measures. According to Maidan logic, all of them are also “separatists”, who need to be deprived of their citizenship and terminate all economic contacts with them. And the truth is, why do something trifling - take and strip citizenship of Ukraine 54,5 (100 - 45,5) percent of the population as “potentially dangerous elements of society” ... And yet - stop paying them wages and pensions, close jobs, land on the spot burn them out and sell them, and then separate them to complete peremoga ...

Then, and only then, the “vilna Ukrayina” will heal so that everyone around will only envy, biting their elbows ...