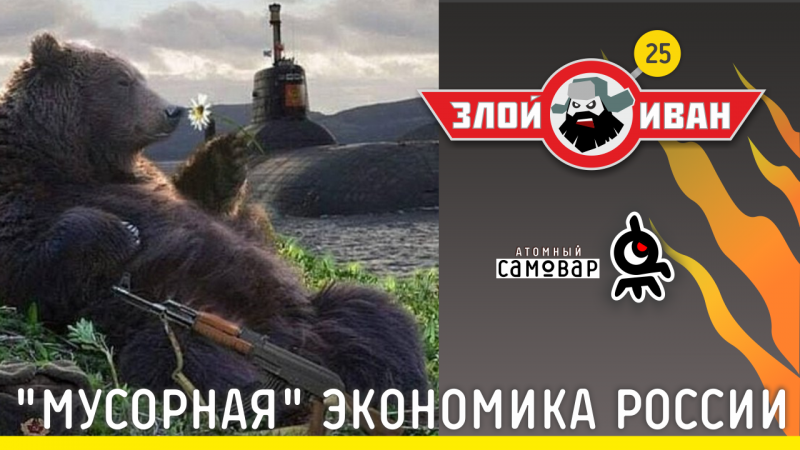 Hello to all of ours and not to ours. I am Ivan Victory and I am angry again today.

And again, russophobes, non-systemic opposition and liberal journalists uncorked and poured champagne from wine glasses, stored from the best of times. And they began to persistently congratulate each other on this undoubtedly sign peremog.

Bummer lads, pour champagne back into the bottle. Peremoga is postponed.
And I will tell you why.

But as so, the concerned viewer will start asking questions. After all, the world rating agency with the incongruous name "Mudize" identified Russia's sovereign rating at the level of "junk" with a forecast for its deterioration. Is this not a verdict of the world community?

Wait a minute! But all this has already happened! A year ago. The same news. The same joyful cries of all propalschik and paravalitikov. For more than a year we have been living with this dismal sentence from the Moodys. And to us, through the liberal media, we decided to remind you that this is a mess. We have to fear, panic and hysteria. And the main thing is never to forget that everything is very bad and everything is lost.

Well, let's go back to our reality. I will not now repeat my thoughts about the ratio of external debt to GDP, about the country's balance of payments, about the ruble exchange rate and the price of oil. The arguments haven't changed much. But since then, quite a few positive events have happened, which the opposition and Western media prefer not to notice or stupidly ignore.

Come in order.
Russia has 6-th in the world gold reserves, which is constantly growing. And only in the past year, its size has increased by 200 tons. This is the size of the entire gold reserves of Kazakhstan.

A small remark.
It must be remembered that Russia provides open data on its gold. Unlike the same USA. Which for a long time already have refused audit. And no one with checks to themselves is not allowed. Type need to take their word.
With the same Germany, which allegedly ranks second in the world in gold reserves, is rather muddy история. The fact is that more than half of its gold is stored in the United States. And in Germany itself is only 31% of its gold reserves. So the rating may not be the same as we are shown. Russia, with its economy torn to shreds ... 6-place on the physical gold reserves. A bit strange. Anyway.

Russia today is the 6 economy of the world. There was a slight setback here, we lost to 5-place in Germany. This is due to the fact that the country's GDP decreased in 2015 year. Another reason is that it is considered in dollars, and due to the depreciation of the ruble, we counted it. Only now the number of goods and services produced has not changed, and has even increased in some sectors of the economy. This is a question about the objectivity of all these Western ratings.

And this year, Russia will become the leader in grain exports, taking the lead from the United States. For the first time in the last 100 years. And this, according to the forecasts of the Americans themselves. Something is wrong with this torn economy.

Suddenly, the production of domestic agricultural machinery has sharply increased, and it must be the case, it is being successfully exported as well. Shipments increased by 30%. But how?

Russia is a major producer of poultry meat. And annually increases production by 7-10%. We fully meet their needs. And we export it. The size of which has increased 2007 times since 70! And in 90-s I recall, we were forced to buy chicken legs from America. Since they could not feed themselves.

We have significantly increased food production. Their imports from other countries have halved. And in 2015, food production has become one of the fastest growing areas in the Russian economy.

Russia's torn-off economy has squeezed a significant share of the oil market from Saudi Arabia, and some experts say that now it is Russia that is the main oil exporter in the world. And we are also world leaders in gas exports.

Russia ranks second in arms exports and holds 25% of the entire world market. For comparison, the US is 33%. And after demonstrating our capabilities weapons in Syria, the order book has grown significantly. And again, despite the tattered economy.

By peaceful atom, we are a recognized and indisputable leader. And here RosAtom scored orders for billions and is loaded with work for decades to come. And again, despite being torn to shreds.

Well, to all of this, Russia is completing a new space center. Builds a bridge to the Crimea and is preparing for the World Cup. We lead the fight against terrorism in Syria. We are launching the Nord Stream 2 project. We have a minimum external debt, we repay all our obligations on time, we have a surplus trade balance and huge foreign exchange reserves.

And on the background of this the assholes of the Mudhiz declare that our economy is cranky. And it becomes clear that this is an order, that this is a lie, that it is impossible to believe the West, their media and their ratings for a long time.

Maybe I’m too naive, but it seems to me that the torn economy should be engaged in, whatever. But not the above listed. Perhaps a country with a collapsing economy and a garbage rating should run around the world with an outstretched hand, begging everyone for money, violating their obligations and not returning debts.

That's just Russia for this description does not fit.

A healthy and balanced economy, it is important for any country. And of course we have room to grow. But unlike most Western economies with an exorbitant rating. Russia's economy is real. It produces, works, invents and creates ... It is doomed to grow and develop, and we need to help her in this.

Everything! Believe in your people and your country! See you soon!
"Garbage" the economy of Russia. Evil Ivan №25 with Ivan Victory
And again we will all die. And again, the Russian economy is torn to shreds!
This time, we are scared by a rating agency called "Moody".
But wait to run to the cemetery, first watch this video. =)