April 28 2016
42
During his life, designer Yevgeny Fedorovich Dragunov created approximately 30 samples of rifle weapons. Today, his name is inextricably linked with the SVD sniper rifle, which was put into service in the 1963 year, but still has not lost its relevance. At the same time, like any designer, he had enough interesting projects that did not go into mass production. One of these little-known types of weapons that remained “behind the scenes” is the small-sized Dragunov-MA machine gun.


In 1973, in the Soviet Union a new development work was initiated on the topic “Modern”, which included the creation of an 5,45-mm small-sized machine gun designed to arm artillery crews, crews of armored vehicles, grenade launchers and technical units. That is, those military personnel for whom the machine gun would become a weapon of self-defense. In accordance with the declared TTKh, the new small-sized machine gun was supposed to maintain single and automatic fire, have a length of no more than 750 mm with the butt unfolded and no more than 450 mm with a folded, weigh no more than 2,2 kg, while the target range should be 500 meters .

Soviet designers of gunsmiths M. T. Kalashnikov, I. Ya. Stechkin, A. S. Konstantinov, S. G. Simonov, S. I. Koshkarov were involved in the work on the creation of a small-sized automaton on a competitive basis. In 1975, another well-known Soviet designer, EF Dragunov, joined the creation of the 5,45 mm caliber compact submachine gun. The weapon developed by him for the low-impulse cartridge 5,45x39 mm was designated MA - small-sized machine gun. 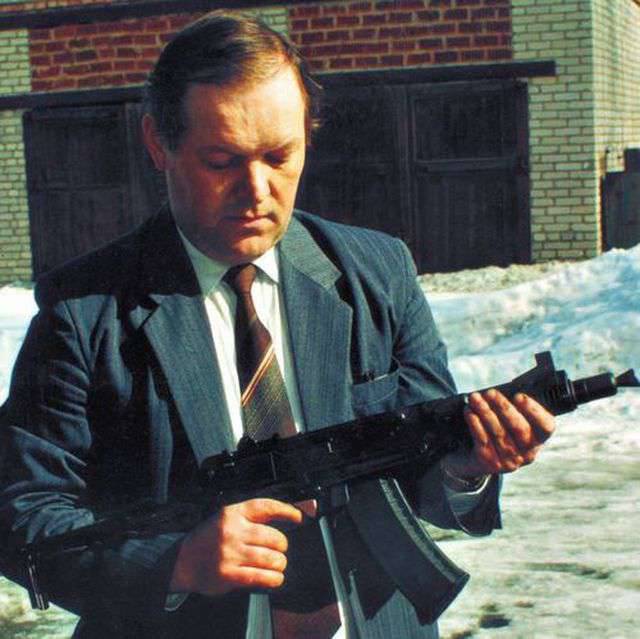 One of the requirements contained in the terms of reference for development was the widespread use of plastic parts in the design. At that time in the department of the chief designer of "Izhmash" there were already works on the manufacture of a number of parts from molded plastic - glass-filled polyamide for the AK-74 submachine gun. As a result, in addition to the plastic pistol grip and shop, the machine gun was able to get a new butt, handguard and receiver pad.

It is worth noting that the design of plastic parts has a number of features. A plastic part provides a noticeable reduction in labor intensity and becomes advantageous when there are no fittings in it (in the ideal case) or the number of metal parts poured into plastic is minimized. However, the most common arrangement of domestic small arms, when the moving parts were located in the box, on top of a closed detachable lid, did not allow the body part to be made unreinforced. Inevitably, it was necessary to pour guides for moving parts, a reflector into the plastic, and also to bind the front insert and the back plate of the box with a power structure. As a result, the output was a metal structure that was “poured over” with plastic.

Therefore, in order to get a really full body part, Evgeny Dragunov used the original layout. The upper part of the construction consisted of a barrel with a low receiver box, in which the bolt with a slide frame was suspended. A plastic box was hinged to the front liner of the receiver, in which the trigger mechanism was located. In the back, a folding butt was attached to the bed. When assembling a small-sized machine, the bed was fixed relative to the receiver by a return mechanism. For this purpose, a single reinforcing part was poured into it, having a hole under the protrusion of the return mechanism. 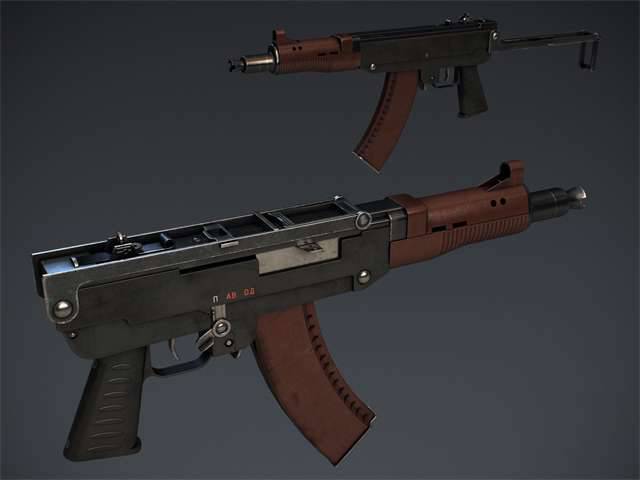 This design significantly affected the weight of the weapon, allowing the machine to be lightened to 2,5 kg with an unloaded magazine. In the back of the box was a metal butt with a folding nape folding over the top of the receiver. Its use has significantly reduced the dimensions of the weapon (total length 735 mm, with a folded butt - 500 mm). The shape of the parts was chosen so that after the butt was folded, the transverse dimension of the small-sized machine gun did not increase, and the folded butt did not interfere with the aiming of the weapon. The latch, which fixed the butt in the fighting position, is located in the rear of the box of the machine. Fixing the butt in the folded position was made using the second latch located on the butt so that pressing the latch and tilting the butt could be done with just one movement.

The first samples of the small-sized Dragunov machine gun possessed a barrel pad, which consisted of the right and left halves (similar to the SVD rifle). With further work on the design of MA, this site has changed. In the subsequent samples of the machine, it already consisted of a lining and a spring-loaded forearm. The stock, receiver pad and spring-loaded forearm were made of glass-filled polyamide - AG-4В.

The principle of operation of the automatic equipment of the Dragunov MA is the removal of powder gases. Locking was done by turning the bolt on the 3 lug. The trigger trigger used ensured single and automatic firing. The power supply of the automaton was carried out from AK74 regular stores (for 30 cartridges). In order to reduce the height of the receiver and simplify the disassembly process, a separate pusher with a slide frame was used in the design of a small-sized machine gun. The opening of the gas chamber was through, and the cork played the role of the front wall, which at the same time was the fixator of the flame arrester. 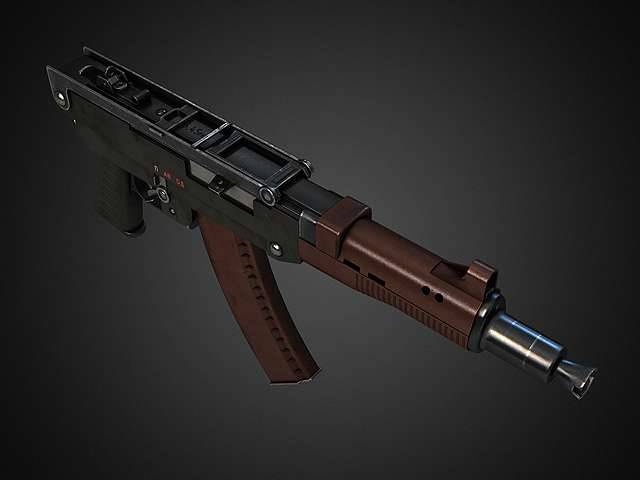 Traditionally, for Evgeny Dragunov’s developments, the trigger mechanism was made by a separate assembly, which was fastened in the box with protruding ends of the trigger axis and the axles of the mainspring support. The mechanism was made according to a scheme with a change in the direction of action of the moment of the mainspring, which in everyday life for brevity was called a scheme with a "blockage of the trigger." A compression spring was used as the combat spring. In the process of cocking the direction of the force of the mainspring passed through the axis of rotation of the trigger, after which the spring began to squeeze the trigger from the bolt carrier. The trigger went over the so-called “dead point” and ceased to interact with the moving parts, thus eliminating the friction between the trigger and the frame during roll-in and at the end of the rollback. Upon arrival in the forward position, the slide frame pressed on the self-timer, pulling the trigger of the weapon from the dead center. The same scheme of functioning of the trigger mechanism was previously used by Dragunov in the PP-71 submachine gun (later known as “KEDR”).

The fire interpreter was in the box at the front edge of the trigger guard on the right. The translator had 3 installations - “P” (fuse on), “AV” (automatic fire) and “OD” (shooting with single cartridges). When installed in the “P” position, the translator's flag goes into the hole of the trigger guard, which allowed simultaneously with the grip of the handle to determine by touch the position of the translator of fire. The long interpreter pen, when in the “P” position, is located in the upper position, which prevents movement of the bolt carrier frame.

On the small-sized machine gun Dragunov was used diopter sight. It had two firing range settings - 300 and 500 meters. The base of the sight rotated relative to the receiver of the machine, while performing the function of the latch of the return mechanism. When dismantling the MA in order to move the return mechanism forward and separate the receiver from the box, the base of the sight had to be rotated 90 degrees. The use of such a construction minimized the possibility of improperly assembling weapons, since, if the base of the sight did not fall into place, aiming from a small-sized machine gun was impossible.

In the first modification of the Dragunov machine, a flame arrester was used, which in its design was similar to that on the AKS74U. Further, in order to enhance the extinction of the muzzle flame during firing and the formation of a compensating effect, asymmetrically arranged slits appeared in the front part of the flame arrester MA. 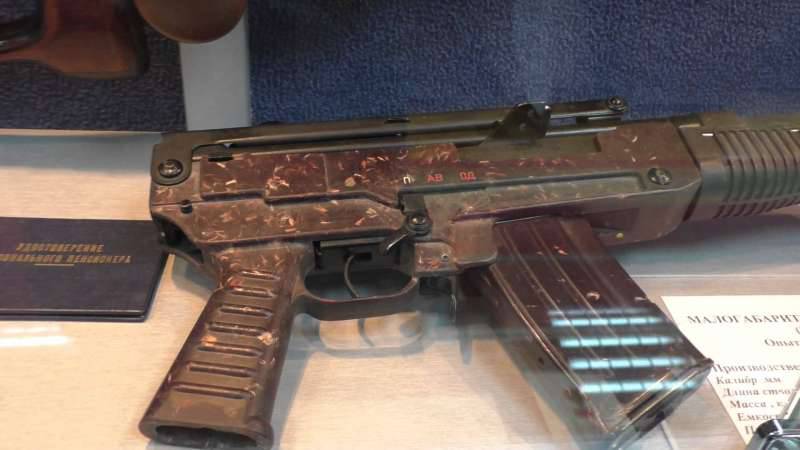 The first tests of a small-sized automaton demonstrated the viability of the design, however, some parts and assemblies of weapons required improvements. When tested in difficult conditions, the automatic trigger machine misfired. This happened because of the insufficient progress of the self-timer, which did not provide a reliable pull-out due to the dead center. To eliminate this delay, it was necessary to re-arrange the mechanism. At the same time, the used scheme with the "blockage of the trigger" turned out to be, as they say, a double-edged sword. On the one hand, this solution made it possible to eliminate braking of the slide frame on the trigger, but on the other hand, when the frame arrived in the front position, in order to pull the trigger out of the dead center, it was necessary to overcome the force of the compressed combat spring, which caused significant losses energy moving parts at the end of the run. As a result, the design and dimensions of the pusher in the gas unit had to be changed several times. Due to the shorter length than the pusher of a SVD rifle, it lost its elasticity and began to deform during operation.

At the same time, to the parts made of plastic, there were no serious complaints. True, during the tests for the service strength of the weapon, when a small machine gun fell on the pistol grip, it behaved rather unusually. The plastic box of the automaton absorbed when it hit the concrete, after which the weapon, like a ball, jumped almost a meter.

By the accuracy of shooting with automatic and single fire from different positions, MA Dragunov showed almost the same results as AKS74U. Like many short-barreled firearms with a powerful cartridge, the Dragunov machine gun had a slightly increased vertical scatter of hits, but for the solution of the tasks assigned to the weapon the accuracy of fire was considered sufficient. One of the advantages of the Dragunov compact machine was the upper location of the butt. Due to this, the sample turned out to be flat, without protruding dimensions (except for the reloading handle) parts, which ensured the convenience of carrying the weapon on the belt in any positions. 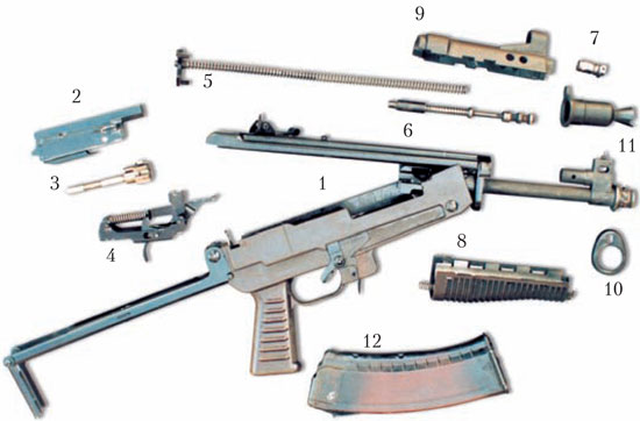 The estimated labor intensity of the production of the automatic machine MA Dragunov was comparable to the laboriousness of the production of the machine AK74. But by that time, as the design of the MA machine had finally taken shape, the USSR Ministry of Defense had already decided to adopt the AKS74U machine gun. Taking into account the fact that it was inexpedient to have in service two different in design, but similar in their technical characteristics of the sample, further work on the Dragunov small-sized machine gun was stopped.

A limited number of experienced models of the Dragunov small-sized machine gun were produced. The MA machine itself was the last truly major development of the famous gunsmith designer EF Dragunov, who during 40 years of work in the department of the chief designer of Izhevsk Machine Building Plant, created 27 samples of small arms, 10 of which were launched into mass production. Among these samples, the MA automatic was the last one that the renowned Soviet gunsmith brought from the stage of the drawings to the assembly and testing of finished weapons.

Tactical and technical characteristics of the MA Dragunov: