Odessa in anticipation of the May anniversary 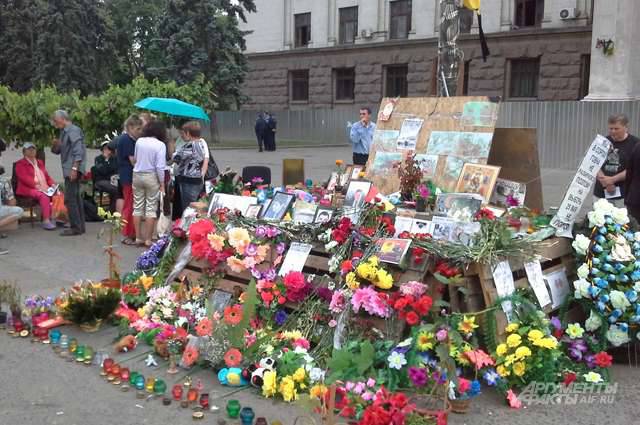 Yes, around Odessa began to move. Various statements and “vangovaniya” on the topic of what will happen in Odessa in the near future appear in various media.

After reading the opinions and talking to several residents of this city, plus reading a rather extensive message that I personally sent, I made the following conclusions, which I later confirmed.

But it is worth starting with the situation in Odessa itself.

I will begin, probably, with the fact that I am quite confident in declaring that Odessa remains the very Odessa. And Odessans have not changed in the past two years. Material life has become worse, but this is understandable, after all, not a free city, but part of Ukraine.

Morally ... Morally more difficult. Those who were the instigators of the tragedy, which began on the Kulikovo Field and ended in the House of Trade Unions, are working quite calmly in the city administration. Who killed and maimed people, joined the ranks of the Odessa police. And the most rabid with open arms accepted into the ranks of the National Guard.

And the leadership of the city and region, with extraordinary ease adapting to the new owners. Familiar. History repeats.

However, residents of Odessa live. And the flowers at the House of Trade Unions and on the Kulikovo Field appear as regularly as the people coming there. Not once a year. Remember. And the action of memory passes weekly.

And shortly before the sad date of 2 May materials began to appear, the content of which can and should be evaluated very, very carefully.

They talk about a possible repetition in Odessa of events comparable to those that occurred in May 2014 of the year. About upcoming actions by radicals, the Nazis and other evil spirits. About the frank support of the Black Hundreds by people at different levels of government, from Odessa to Kiev.

It would, of course, be strange if such statements did not arise.

Many writers say that the situation in Odessa is tense. But it is not Odessa citizens who are heating it up, even if they are dissatisfied with the fall in the standard of living, the rampant Nazis, the strange reforms of Saakashvili with the redistribution of property. The situation is aggravated by quite different forces. Odessans just silent.

In one of the articles on the situation in Odessa, I saw the following list:

- The Security Service and the Interior Ministry want to report on the defeat of the pro-Russian underground and Putin’s agents,

- Saakashvili's gang wants to divert the attention of residents from reprivatization,

- battalions (primarily “Azov”) are interested in creating an information picture of at least some “victory” against the background of useless two-year treading around Shirokino,

- VSU will be able to use the Odessa events to capture the next gray zone or pull up to the front line of prohibited systems weapons,

- National-patriots in the Rada hope to push through the bills they have been carrying out for a long time and achieve a rupture of diplomatic relations with Russia, which Paruby dreams of. "

Please read these points carefully. And think how serious is what is voiced in them.

I deliberately did not voice the author of this list, I will only note that more and more such nonsense appears on the Internet. The whole question is as old as the world: who benefits?

If someone is pumping outright hysteria around possible 2 events in May, then there are reasons for that. The chain can be traced easily: several articles with hysterical content on the topic “dark forces are going to disperse the May 2 rally in Odessa” - and this is the result.

Saakashvili is demanding the introduction of additional forces of the National Guard under the city, the police-police are switching to an enhanced regime, the Nazis of all stripes and ranks are preparing for a trip to Odessa, even squalid Navy conducts anti-terrorism exercises. Oh, where, God forgive me, psevdomoryakov suffered, generally amazed. But suffered. The Nazis are training too.

Everyone is preparing for 2 May.

Against this background, Andrey Uvarov writes the following:

"Odessans are heatedly discussing their actions on 2 and 9 in May. A significant part of the citizens propose to defend the right to keep the memory of the victims of the Bandera executions, others call on the masses to take Victory Day to the streets."

This is the work of outspoken provocateurs. In fact, as I was explained, no one, except the provocateurs, "hot" does not argue. They have such a job. Indeed, what a bummer could happen if the National Guard, Natsik, Pravosek be driven off, and there will be no masses on the streets? Why then fuss?

By the way, the right to keep the memory of the victims of 2 in May so far no one has selected. People come to the house all the time. And go out to the streets en masse, in order to arrange a rally, to which all of the above will come with great pleasure ...

As one Odessa citizen told me in a conversation, “we have already been taken out once. Putting our way to our happiness twice with our corpses will not work”.

And one more quote. From the same Uvarova.

"The real balance of power between the fascists and the anti-fascists in Odessa is approximately equal, but on the side of the former, power.

In discussions about how to stop a provocation being prepared, some hope to attract as many as possible Western politicians, public figures, and journalists to the city in May days; they note that Western human rights activists have become more attentive to the “Ukrainian theme”, including its Odessa segment, that the European Court of Human Rights is already demanding to release from Odessa the journalist Elena Glishchinskaya, arrested on charges of separatism and high treason. American human rights defenders - representatives of the United National Anti-War Coalition (UNAC) are preparing to come to Odessa. However, there are quite a few skeptics in the city who say in response to these expectations that only the activity on the Donbass-Ukrainian front can prevent the transfer of additional military-police forces to Odessa and prevent provocations.

Here is this gentleman himself and showed in all its glory. Indeed, a large number of armed people who openly hate those who would go to rallies will be brought to Odessa. And with frank pleasure, these forces would repeat the 2 of May again.

And the fact that among the people would be those who waved the Russian tricolor and shouted something like "Putin, come, put things in order," my interlocutors have no doubts at all.

It turns out how simple it is: to attract Western representatives of some organizations, journalists, public activists. And more. So that everyone could witness how the pro-Russian separatists will first arrange a provocation, then the security forces provoked by them will begin to disperse the rally, and then ...

You already know what happened next. Two years ago. And what were the consequences. And how the crime was investigated in this country. Do not forget? So in Odessa, they did not forget.

And now, two years later, the same Judas who set up people under organized and, most importantly, armed Nazis, are calling for people to go to the rally to stop the provocation being prepared. Yes, and attract more people from the side. Perfectly.

Exactly what the Nazis dream of.

Well, the best cure for provocation is to launch the offensive by the LDNR armies in general. This is what will prevent the transfer of police forces to Odessa. They will go to reflect this offensive. And to hell with Minsk, god with them, with losses. The main thing is to break the provocation. Provocation same.

It is good that in Odessa this is also well understood. And I will do, I hope, as I was told.

It is planned to simply share memory. People will come to the House and on the field. Bring flowers, candles, lamps. Once again, those who stayed there forever will be remembered. And just leave. And no one will hold rallies and yell from the podium.

Not those times. An occupation. Fascist.

And for every unarmed crowd there is another crowd in Ukraine today. Armed. And Odessa residents understand this. And if someone who reads will be outraged by this point of view, I will give him one good advice: remember the killed policemen in Mariupol. Remember, do not be lazy. They had a weapon.

Judging from a sofa in Russia is very easy. There is hard and difficult.

Actually, I would like to add the opinion of one from Odessa. A person who knows the situation better than me. Check out And do not fall for the fiery speeches of the dubious content of all kinds of uvarovs, Zelensky, dzygovrodskih and others. They are also easy to write.

Living in occupation and being human is much more difficult.

Ctrl Enter
Noticed oshЫbku Highlight text and press. Ctrl + Enter
We are
Participants of the Odessa resistance: "We had to go to the new Kulikovo battle"Odessa. About Kulikovo field and hundreds of graves of "surgical waste"
Military Reviewin Yandex News
Military Reviewin Google News
67 comments
Information
Dear reader, to leave comments on the publication, you must sign in.