The first in the world: ten facts of the primacy of Baikonur 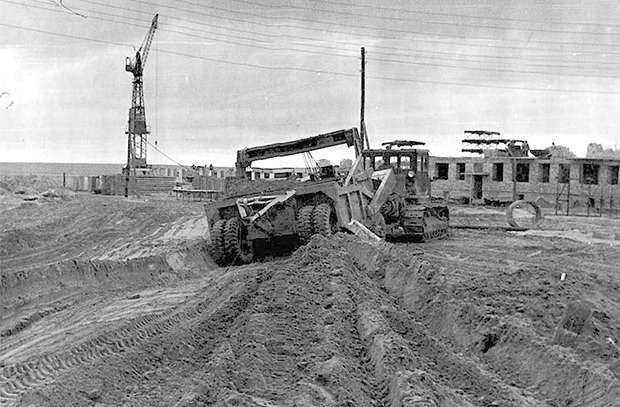 В stories space age there are several certainly unique events that have become landmarks, marking the road of humanity to the stars. And it would not be an exaggeration to say that the largest part of them was “supplied” by Russian cosmonauts, engineers, designers, builders, and other people whose hands created domestic cosmonautics. The first launch of an artificial satellite of the Earth and the first manned flight into space - only these two achievements would be enough for Russia to forever inscribe its name in the world space history.

But there are a few more dates that are much less often remembered even in our country, not to mention others. It is about choosing a place and building the Baikonur cosmodrome - the first "space gate" of the Earth. In his story the most important - because the first! - 1955 became the year during which the development of the space center’s future space began. On January 12, the first subdivision of military builders arrived at the Tyura-Tam raid in the Kazakh steppe, and they began to prepare places for their comrades and to mark the contours of future objects. February 12 issued a decree of the Council of Ministers of the USSR on the creation of a test site for ballistic missiles - NIIIP number 5. April 28 military builders, waiting for the thawed earth, poured the first cubic meter of concrete into the foundation of the first object of the future cosmodrome - the highway that connected the first buildings and the launch pad (its construction began on July 20). On May 5, the first capital building of the residential campus was laid, and on July 2 became the official birthday of the cosmodrome: then the General Staff approved the staff structure of NIIP No. 5 and created the headquarters of the test site.

More than half a century has passed since that distant day, but the space center is still continuing its work. Today, it was built once by the forces and means of one large country, it turned out to be in one of its fragments - independent Kazakhstan, from which Russia rents Baikonur for 115 million dollars a year. But this does not prevent our country to annually launch from here a half or two dozens of spacecraft, supporting the life of an aged but still operational legend of the Russian space. Moreover, Baikonur and its employees have already never achieved results already achieved, and among these achievements there are quite a few world records and events that took place for the first time in the world!

1. The world's first spaceport on the size of the occupied area

The Baikonur Cosmodrome covers an area of ​​6717 km xnumx, and this makes it the largest cosmodrome in the world. This area contains 2 launch complexes (including 16 operating), 8 assembly and test buildings, two refueling stations, a universal and technical filling stations, a measuring complex with a computing center and an oxygen-nitrogen plant. But the cosmodrome is only part of the Baikonur complex, which also includes the city of Baikonur, initially called the Leninsky village and then the city of Leninsky. In a city whose population exceeds 11 thousand people (almost half of them are Russians), there are more than 70 residential buildings, six hotels, a hospital and two polyclinics, 300 schools, vocational schools, a technical school and a branch of one of the leading aerospace universities of Russia - MAI. Plus, two airfields - Extreme and Jubilee (the last Russian shuttle “Buran” landed on the last in 14).

2. The world's first cosmodrome in terms of the number of launches of spacecraft

The annual number of launches of spacecraft from a particular cosmodrome varies greatly and depends on many factors: the state of the national space program, the availability of financial, technical and political capabilities of the country of operation, and so on. And although Russia is gradually transferring part of the launches to the Plesetsk cosmodrome, and will soon begin to transfer to the Vostochny cosmodrome, the vast majority of Russian launches are still taking place from Baikonur. Due to this, the cosmodrome in the past few years has regained the world championship in the number of annual launches. In particular, last year 18 was launched from Baikonur, 17 was launched from the Canadian Spaceport Canaveral, and from the Guiana Space Center (Eurocosm) it was 12.

3. The world's first launch of a space satellite

Baikonur has become a place that forever went down in history as the place of the first space launch. October 4 1957 was the first in the world artificial satellite of the Earth, PS-1, aka Satellite-1, that was launched into Earth orbit. He started in 22: 28 Moscow time and spent 92 on the near-earth orbit of the day - before 4 in January 1958 of the year, making 1440 revolutions around the Earth. Satellite transmitters worked for two weeks after launch, and the famous “beep-beep-beep” could be received by radio amateurs around the world. But, besides world fame, this day returned Russia and confidence in world politics: he proved that our country is the only one in the world! - possesses a ballistic missile capable of carrying a nuclear charge. P-7, which put the satellite into orbit, was just such a rocket: its first “military” successful launch, about which no one had ever trumpeted, took place at 21 August 1957 at Baikonur.

4. The world's first launch of a satellite that photographed the far side of the moon

Exactly two years after the first space launch, Baikonur once again became a platform from which the creation created by human hands went into the unknown. October 4 1959, the Vostok-L launch vehicle, launched from Earth, carrying the Luna-3 space station on board. Three days later, the satellite reached the moon and was able for the first time in history to photograph its reverse side, invisible from our planet. It was actually a double success of the Soviet lunar program, because in less than a month before that, on September 14, the automatic station "Luna-2" became the first device in the world to descend on the lunar surface. 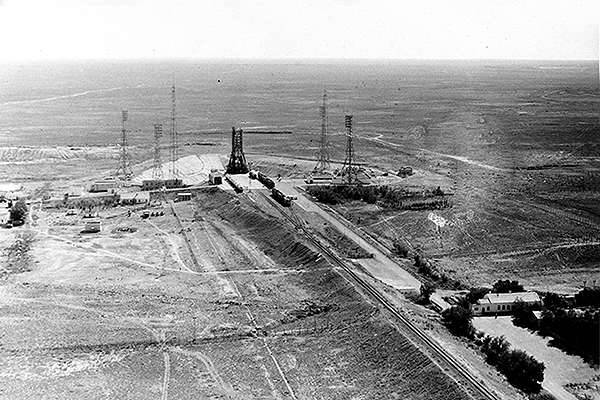 19 August 1960 of the year 11: 44 Moscow time from Baikonur launched the Vostok launch vehicle - the heir of the legendary P-7 - with the satellite Sputnik-5 on board. After 25 hours, the descent capsule of the ship returned to Earth, from which the search team retrieved the first living creatures that had been in orbit and had returned, the dogs Belka and Strelka. This flight was of great scientific importance and directly predetermined the features of subsequent launches: the apparent malaise of dogs on the fourth turn led scientists to conclude that the first manned flight into orbit should be with a minimum number of turns.

6. The world's first launch of a manned ship with a man on board

12 Day April 1961 year was the birthday of manned space flight. In 9: 07 Moscow time, the Vostok carrier rocket with the same spacecraft onboard started from site No. 1 (since then at Baikonur it is called “Gagarin launch”), and half an hour later the world's first cosmonaut Yuri Gagarin was in orbit. According to the approved program, adjusted for the results of the Belka and Strelka flight, the Vostok ship made a single turn around the Earth, and the entire flight took 108 minutes - at 10: 55 Gagarin had already landed in the Saratov region.

7. The world's first launch of a spacecraft, descended to another planet

The Molniya launch vehicle, in the head part of which the automatic station Venus-3 was located, started from the Baikonur 16 cosmodrome in November 1965 of the year at 7: 19 Moscow time. The research program of Venus in the Soviet Union was developed extensive and quite complex. So, "Venus-3" flew to the second planet of the Solar System in tandem with the station "Venus-2", which was four days ahead of it when it started from Earth and for two days when approaching the target. Unfortunately, it was not possible to get meaningful information about the Venusian atmosphere and other features of the planet: the station's control system failed when it approached, and on Earth it was only recorded that it reached the surface of Venus.

8. The world's first launch of the planet rover

10 November 1970 of the year 17: 44 Moscow time from Baikonur launched the Proton launch vehicle carrying the interplanetary station Luna-17. The ordinal number of the station hinted that there was nothing unusual in the seventeenth launch of the satellite to the Moon - and was deceiving. On board the station was the world's first planetary cruiser, designed to move on the surface of another celestial body. He was called "Lunokhod-1" and had, among other tasks, to choose a place for the landing of Soviet cosmonauts. 17 November moon rover reached the moon and slid to its surface. He worked for almost 11 months, that is, more than three times longer than its creators expected, and it was not his fault that the place he chose to dive into the Soviet lunar stall remained unused.

9. The world's first launch of a manned orbital station

Salyut-1, a long-term habitable station (DOS), launched from Baikonur on board the Proton launch vehicle 19 on April 1971, only a little before the tenth anniversary of the first manned space flight. During the 175 days that the world's first space station spent in space, two expeditions managed to go to it. The first, alas, failed to get on board the Salyut due to a technical malfunction, but the second safely visited the station, proving to the whole world that the long-term existence of a person in near-earth orbit has finally shifted from science fiction to the field of objective reality.

10. The world's first launch of a rocket with a space tourist aboard

28 April 2001, exactly 46 years after the start of construction of the Baikonur cosmodrome, from its launch pad No. 1 - the very “Gagarin launch” - the world's first space tourist, an American businessman Dennis Tito, went into orbit. By the time he started, 61 was a year old, but this did not prevent the multimillionaire, who had paid 20 million dollars for his journey, to spend six days in space. He became the first non-professional astronaut to visit the International Space Station.

Ctrl Enter
Noticed oshЫbku Highlight text and press. Ctrl + Enter
We are
Cosmonautics has a limitless future, and its prospects are endless, like the Universe itself (S. P. Korolev)Star Wars on the land of Baikonur
Military Reviewin Yandex News
Military Reviewin Google News
72 comments
Information
Dear reader, to leave comments on the publication, you must sign in.