On the peculiarities of recruiting for the French army

1 May 2016
59
As it happens every three years, the French land forces launched a new campaign to attract personnel to their ranks. It includes posters, television and online videos. Its cost is 2 million euros. The campaign is aimed at the personal qualities of applicants, gradually moving away from the slogan: "Your will, our pride." The goal of the recruiting campaign is to recruit 14000 people. 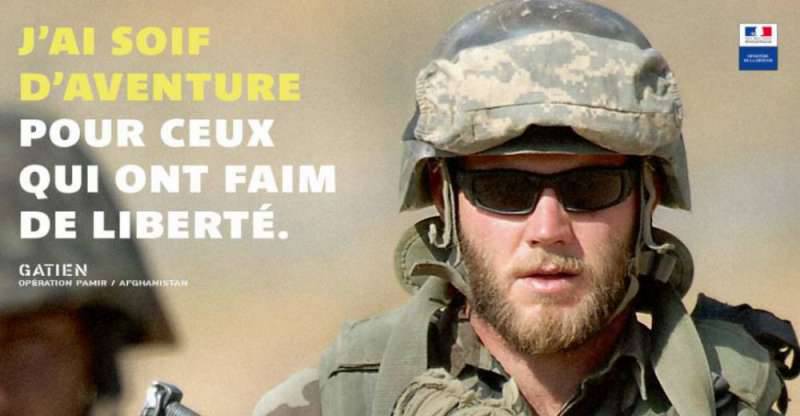 Propaganda poster conscription to the French army. The inscription on it translates as follows: "I thirst for adventure. For those who are eager for freedom" (c) French Ministry of Defense

Every first Monday of the month, the ground forces centers receive new candidates and their families for the signing ceremony. This solemn moment this year will come for 14000 people. 14000 is the number of volunteer ordinary soldiers (EVAT) of the ground forces, which must be recruited in 2016 year. This is a slightly increased figure, as a result of the growth in the army after the 2015 attacks of the year. In the 2014, recruits were 9000 people, that is, in two years the growth was almost 50%.

Recruitment device operating at full capacity. An additional number of people should be added to EVAT volunteers - officers and sergeants, foreign legion legionnaires, firefighters of Paris, as well as pilots and sailors. In total, 23000 young people will open the door of the barracks for the first time this year. This is a pretty impressive figure. As the officer of the French army notes, “this year every recruiter must bring a platoon into the army,” or an 30 man.

After the transition of the French army to a professional basis in 1996 and the demobilization of the last conscript in November 2001, only volunteers joined the army. Although countries such as the United States and Britain have difficulty recruiting new soldiers, France has been an exception for the past twenty years. Ground forces can choose - for each place there are two candidates. However, this average figure hides the situation in various areas. So, the difficulty is the search for mechanics aviation technicians, cooks and information system specialists because of strong demand in the civilian sector, with this year 150 worthy applications for 20 places for admission to the fifth year of an officer school in Saint-Cyr.

What is pushing a young man into the army today? And, on the contrary, what can turn him from this decision? General Thierry Marchand, an officer in the Foreign Legion, is responsible for recruiting land forces. In response to the question "l'Opinion", he described a diagram of what is called the "field of motivation and uncertainty" of candidates for admission to the army. Immerse yourself in the heart of the difficult trends in French society. “We fix the three most important expectations of young people who sign a contract with us. One of them is new - this is the “Charly effect”. Young people tell us they want to serve and protect the country. Everyone also emphasizes the difficulties that accompany entry into a full life, and they believe that the army is a good springboard for this. The third motivation is that the army is a busy life, an adventure, but also a search for a foothold and understandable starting points. We offer them something well-defined in this changing world, and this attracts them. ” Money? "They never talk about it, we are concerned with this topic." The salary of the recruit as a whole is at the level of the minimum wage, but the soldier is “shod, dressed and fed,” and the salary is enough to meet basic needs, especially when he is sent to participate in operations abroad.

As for uncertainty, General Marchand sees three main components. “When they come to us, for them it is often like a burn. At first they are confronted with crampedness in a room where there are six people, and for most it is a serious injury. In addition, they do not have constant access to cell phones ”, in other words, to friends and social networks. "We will organize special recreation areas for this, but they must understand that in the performance of the combat mission it will be impossible for them." Sailors are familiar with it firsthand. The complete interruption of communications during long military campaigns becomes a serious obstacle for many sailors when it comes to settling on a ship.

Last rather sensitive point: families. “Now we have to consider military service as a family project. We try to instill army culture in families by inviting them to a part and informing them. The fathers of recruits no longer have the experience of military service, which still gives rise to many myths. What we fear the most is the call of the mother to her son at the end of the first week of service: “it is very difficult, go back home”. ”

Despite the processing of future recruits and their family members, the percentage of contract breaks (“exhaustion”) during the first year is about 20%. General Marchand is trying to look confident, in his words, “this is observed not only in the army. This is a mobile generation. ” To make the cost of recruiting and training, while maintaining a relatively low age of a soldier, ground forces expect that the life of the EVAT will average at least eight years. However, it is not yet possible to achieve this indicator - the average service life today is six years. “Increasing loyalty” among military personnel remains a serious field of activity for the General Staff.

Despite popular opinion, the army does not offer a guaranteed workplace comparable to the public service. Generally speaking, two of the three military personnel are serving fixed-term contracts (for several years), and this is the case for the rank and file. Only the officer corps is partially distinguished by a “professional approach”. In the ground forces, the share of military personnel under the fixed-term contract is 72%.

More than half of the rank and file completed a bachelor's degree [that is, they have a complete secondary education], among sergeants dominated by people with incomplete higher education, and among the officers, most have university degrees. The average age of volunteers is 20 years. Girls have 10% candidates and about the same number among recruits. General Marchand does not hide the fact that he would like to see the growth of this indicator.

Geographically, some regions "supply" a greater number of military compared to others. This is the case for the northeastern and southeastern regions of France, but there are fewer lovers of military affairs in the west. 12% of recruits account for overseas territories, the number of volunteers from there is three times higher than the metropolis, if we count by population.