April 28 2016
53
The Chinese system of personnel training for the defense industry complex is worthy of study, and maybe imitation


China has an extensive system of training for the defense industry, which includes both engineering faculties of leading technical universities and a number of large universities directly subordinate to the State Administration of Defense Science, Engineering and Industry. At the same time, according to the national ratings, a number of specialized “military-industrial” institutions of higher education are among the leading ones in the PRC.

Military institutions of higher education also play a certain role in the training of specialists in the military-industrial complex. Some of them, for example, the PLA Information Technology University of Engineering, belong to the largest research centers in their fields.

For Chinese military-industrial companies is characterized by extremely close relations with leading universities, including those not included in the sectoral system. The “defense” of the PRC is generally encouraged by the state to cooperate closely with civil science and industry. Such interaction, accompanied by the placement of orders for R & D outside the military-industrial complex and the exchange of technologies, is considered as a priority for the development of the industry since 80-s and relies on specially created organizational structures. This is, in particular, the integration department in the Ministry of Industry and Information. The result of such cooperation is close contacts between the defense industry and civilian university science, which creates conditions for successful cooperation in personnel training. The teaching staff of the leading technical universities subordinate to the Ministry of Education of China, on a permanent basis, cooperates with both the enterprises of the military-industrial complex and the People’s Liberation Army of China itself.

Since the end of 90, the country has a system of training military and military engineering personnel based on large civilian universities, modeled on the American Corps of Training Reserve Officers (ROTC). At the initial stage of the reform, the goal was to bring the percentage of graduates of civilian universities (the so-called defense students - gofanshen) to at least 60 from the annual replenishment of the PLA officer corps. As far as can be judged, it has not yet been achieved. Nevertheless, civilian universities have already become an important tool for training officers. The system also allows the PLA to provide first-class specialists its extensive network of military missions in defense enterprises. Subsequently, many of the officers who received training in relevant areas, continue to work in the defense industry. In general, for university management, meeting the needs of the defense industry and the PLA is one of the key performance indicators.

Along with the release of army cadres, targeted training programs for the defense industry complex have been launched at major civilian universities. Their participants, like the gofanshen, undergo a customized course developed for them, receive special scholarships and study at the state expense. And later they are obliged to work out the distribution at the enterprises of the military-industrial complex for a certain period, as a rule, within six years.

Targeted training systems for the army and defense industry play the role of social elevators, allowing program participants to access free education in the most famous Chinese universities. For example, one of the most prestigious Chinese universities - Tsinghua (Beijing), which occupies 47th place in the World Times ranking, is the largest forge of personnel for nuclear, missile and aviation industry. He leads a training program for officers in technical specialties.

The defense industry corporations of the People's Republic of China - 10 specialized holdings and the Chinese Academy of Engineering Physics (developer and manufacturer of nuclear weapons) are not limited to the replenishment that came from targeted programs. They conduct a constant and very active search for talents among the entire mass of students. For this purpose, constant communication with university departments of employment is maintained, which are regularly provided with information about vacancies.

With such attention to the establishment of interaction with civilian science, the leadership of the Chinese defense industry complex continues to systematically develop seven subordinate universities. All of them are currently among the leading universities of China and are participating in the "211 program" - a project for the priority development of 100 national universities. They are actively represented in the international arena. For example, the Beijing Polytechnic (PPU) is a participant in the project of the Joint Russian-Chinese International University in partnership with Moscow State University.

At present, PPU has about 29 thousands of full-time students and trains specialists in almost the whole range of specialties demanded by the defense industry, starting from microelectronics, aviation and space technology and ending with pharmaceuticals and biotechnologies - total 60 positions in the undergraduate degree. PPU is among the ten best universities in the country in the national ranking.

Harbin Polytechnic University has a slightly smaller scale (about 25 thousand people) and a narrower specialization. HCP plays a special role in the release of personnel for the rocket industry. It is also the most important center for training space technology developers. And, by the way, one of ten universities in the world, capable of independently designing and producing space satellites. PPU and HPU are among 39 Chinese universities participating in the “985 program”. It assumes targeted subsidies to leading universities, from which as a result positions are expected to rise in international rankings.

Harbin University of Engineering grew out of the former PLA Military Engineering University. The most important specialization of the university at the present time is the training of shipbuilders, hydroacoustic specialists, energy specialists and special engineering structures in the interests of the space and aviation industries. The university enrolls about 15 thousand people in undergraduate and more than eight thousand in the magistracy. There are large scientific centers in it, occupied, in particular, by atomic technologies and the creation of underwater vehicles.

Nanjing looks to the sky 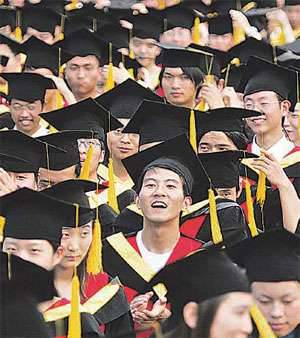 Another center of education in the interests of the MIC is Nanking, where two universities are located: aeronautics and astronautics (LSAA) and polytechnic (NPU). NOAA is the most important specialized center for the training of design engineers for aviation and space technology, as well as representatives of other specialties demanded by aircraft and air transport. The university enrolls about 15 thousand people.

NPU with its 22 by thousands of students is a general technological university that grew out of the former PLA engineering and artillery institute. Unlike PPU and HPU, NPU has a slightly larger proportion of civilian specialties. His strengths are information technology, he also has a powerful engineering and chemical department.

Northwest Polytechnic University, located in the city of Xi'an, trains 14,4 thousand people in undergraduate studies and about eight thousand in master's programs. Here specialists are trained and carried out weapons developments in the interests of the Navy and Air Force, as well as in the field of aviation instrumentation. In particular, the university is considered the most important center for the development of technologies for the production of torpedoes and sea mines. Another rapidly developing specialization of the university is unmanned aircraft.

Talents will not be lost

The system of seven technical universities under the control of the Ministry of Industry and Informatization allows the leadership of the Chinese defense industrial complex to centrally develop its own research base in the most important areas, avoiding fragmentation of resources between sectoral corporations, sometimes competing with each other. In addition, it provides an opportunity to build a system of training in accordance with the specific needs of the industry. At the same time, military-industrial universities strive to maximize the development of international contacts and integration into world science. Acting on a nationwide program for the development of higher education, they establish partnerships with foreign companies and universities, attract teachers and students from abroad.

At the same time, the industry does not close at work with subordinate educational institutions, it is actively working to expand partnerships with leading civil universities. This allows the Chinese defense industry to compete effectively for talents with dynamic enterprises of the high-tech civilian sector. The advantages of the defense industry are considered to be a higher level of social protection of workers and high prestige at a competitive salary level.