Daughter of the regiment: "Coil" and "Toy"

April 29 2016
8
... Once I listened to the broadcast. She acted Elena Alekseevna Markova, a native of Belgorod, a veteran of the Great Patriotic War. Unfortunately, I was not included in the program from the beginning, but even those few minutes painted a portrait of a brave orphan, the daughter of a regiment who became a signalman for the 372 battalion of the airport service. And with what call signs - "Toy" and "Coil"! So her fellow soldiers and called ...


He was shaken by the voice of Elena Alekseevna: youthful and vigorous and energetic, clear in the military, although her age at the time was already considerable.

I thought then: what does this courageous woman look like? How did her fate? That's how.

Elena Alekseevna was born in the village of Bolshroroitsa, Shebekinsky District, Belgorod Region. Shortly after her birth, her parents separated. And when the girl was only five years old, her mother died. Lena took aunt: father, Alexey Sergeevich, could not do this, there were no housing conditions. However, Aunt Lena did not live long - she also died. “And I began to live in neighbors,” said Elena Alekseevna, “they paid 20 rubles for my bed-place ...”

Think about this phrase, dear readers. She lived in neighbors, a bed ... Today, at almost every step, development centers, studios, sections, adaptation programs - just pay. But most children grow up with a pronounced consumerism. And here - an inordinately hard life instead of centers and studios - and the man grew up decent and brave.

You can say, fed the girl farm: gave out the neighbors products. Relatives also helped Lena as best they could. Before World War II itself, fourteen-year-old Lena lived in the house of spouses who treated her like her own daughter. And, most likely, the girl owes the wife of the head of the family life. Because when the fascists attacked our country, the owner of this house went to the partisans, became the commander of the detachment. And in 1942, in the village, a battalion stayed for the night, which was to become a native Lena. And he stopped just in the house where the girl lived. By that time, Lena had received another blow from fate: she had learned that a father had died at the front, in the Oryol Region, and she is now an orphan.

- I beg you, take the girl to yourself, - the hostess of the house asked the soldier. “I'm afraid the Germans will come in soon.” I am most likely shot, but I'm ready for it. And what about the girl? She is an orphan.

And the fighters took Lena with them. So she became the daughter of the 372 th battalion of the airfield service of the 27 th base area of ​​the 8 air army. The girl was intelligent and quickly learned to be a signalman. Call signs came up with. When providing communications for combat flights, it was the Coil. And if served the garrison - "Toys."

"Fathers" are so accustomed to these callsigns that they didn’t call their name daughter by name. So it fought "Coil" and "Toys" on the Southern Front, Stalingrad, Belarus.

The battalion was big. Lena lived with a woman who worked in the kitchen and her baby daughter. When they stood on the banks of the Volga, they lived in mud huts. There was even a case when there were no cars left after the bombing, and breakfast was brought to the airfield on a cart pulled by camels.

When our troops began to attack, the first point of the battalion was the one where the regiment of the famous Alexander Pokryshkin, the future hero of the Soviet Union, was. Elena Alekseevna recalled that this is a man of amazing modesty and cordiality.

Served and the regiment of Basil Stalin. Lena remembered him with a daring pilot-bully in a black coat, ready to go into battle at any time.

I must say, Lena, too, was known as a militant, was not afraid of anything, climbed into the thick of it. And miraculously saved from death.

This happened at Stalingrad. The daughter of the regiment was on duty, and at the very foot of the airfield there was a railway and there was a Soviet train with ammunition into which the bomb landed. Fortunately, our fighters saw that Lena was covered with earth. They brought shovels, dug out - blind, deaf, numb. She was taken by ambulance with other wounded to the main crossing of Stalingrad. Next was to be ferried. For the rest of her life Elena Alekseevna remembered such a “color picture”: the black sky and the bright red steam - it was burning. So, on the burning, and crossed over ...

After the hospital, Lena joined her “fathers” again. I got to East Prussia, where, while on duty, I heard the famous message of Levitan - and met our Victory ... 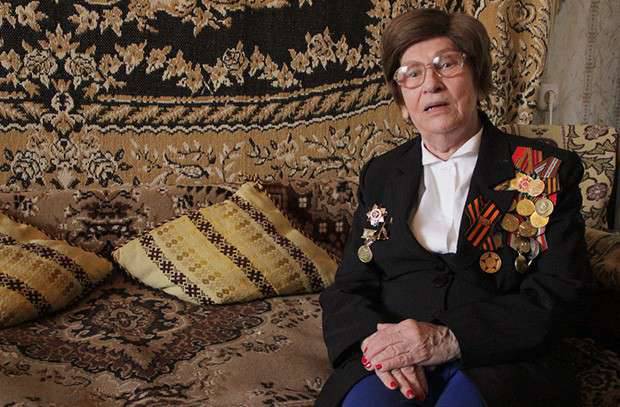 For three more years, Elena Alekseevna worked in Germany under the headquarters of the GSO. She missed her homeland very much. Sometimes, someone from her acquaintances went to Russia - then the girl asked me to bring her toothpaste and perfume "Red Moscow" ...

When, finally, Elena Alekseevna returned to her native Belgorod, at first she simply lived and was glad that she saw her native land again. And then she began to search for relatives. But only half a century later, she found her uncle, father's brother, war veteran, tankman, already a deeply elderly person. Elena Alekseevna took him to her.

Bow to you, daughter of the regiment ...