US foreign military bases on the images of Google earth. Part 3 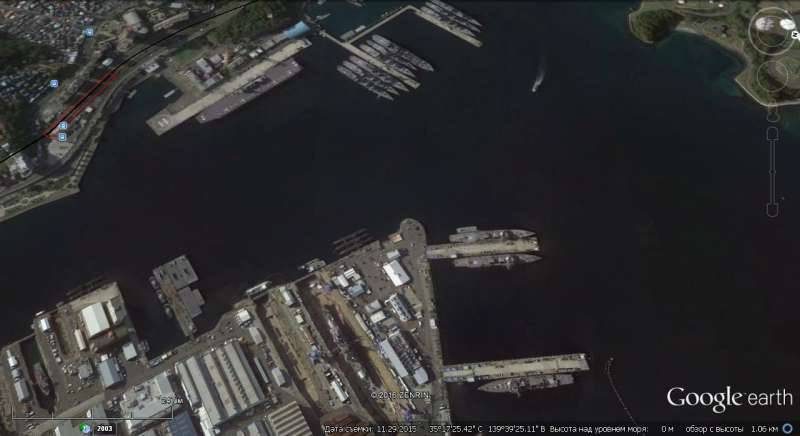 A very significant number of US military installations are located in the Asia-Pacific region. First of all, this refers to South Korea and Japan, where large American military contingents are stationed.

But other countries are not deprived of attention. For example, about halfway between Australia and Vietnam, Singapore has an American naval base, known as Sembawang Naval Base. Here, quite often, large American warships moor. 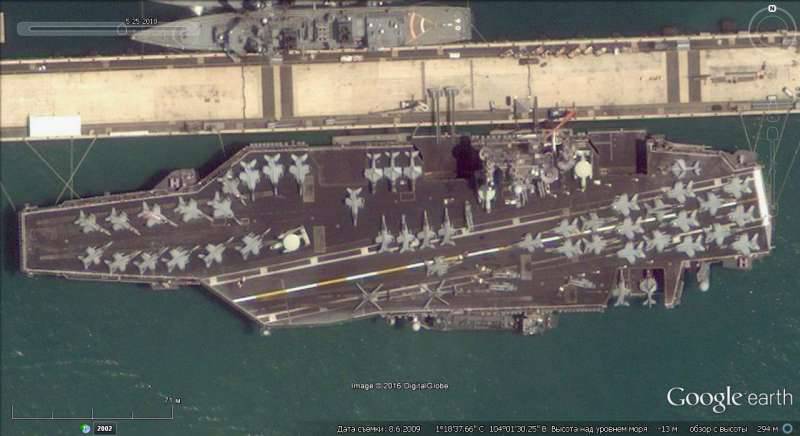 Sembawang Naval Base was founded by the British in 1923. After the withdrawal of the British armed forces in 1971, it was transferred to the control of the Singapore government and was used as a logistics service point for the US Navy, Australia and New Zealand. In 1992, an agreement was concluded between the USA and Singapore on the deployment of the 73rd Logistics Support Group of the Seventh withdrawn from the Philippine base Subic Bay. fleet US Navy.

At two Singaporean airfields, American military transport aircraft and air tankers periodically make intermediate landings. In addition, the KS-135R refueling aircraft available as part of the Singapore Air Force from the Changi Air Base can, if necessary, be used for refueling an American combat aircraft aviation. 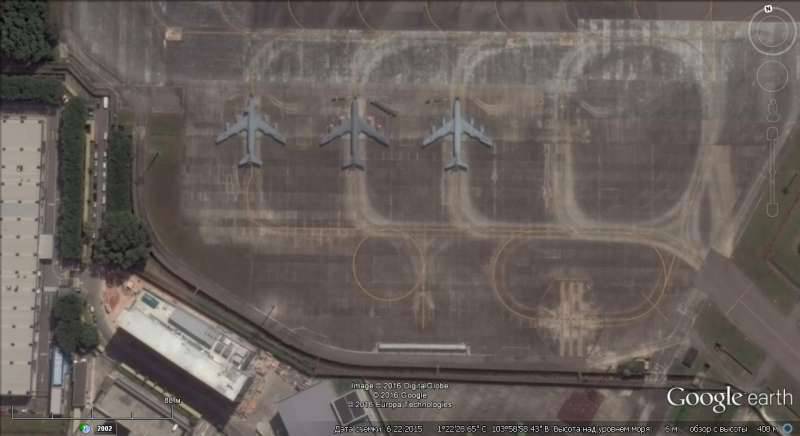 It is known that in the past, procedures were refueled for US aircraft MH-130H, MH-53 helicopters and converting planes MV-22B US Special Operations Forces with airplanes of the Singapore Air Force KC-130B from the Papaya Lead Air Base.

As of 2014, there were 29000 American troops in the Republic of Korea. The US ground forces in Korea are part of the 8 of the US Field Army with headquarters in Yensan. 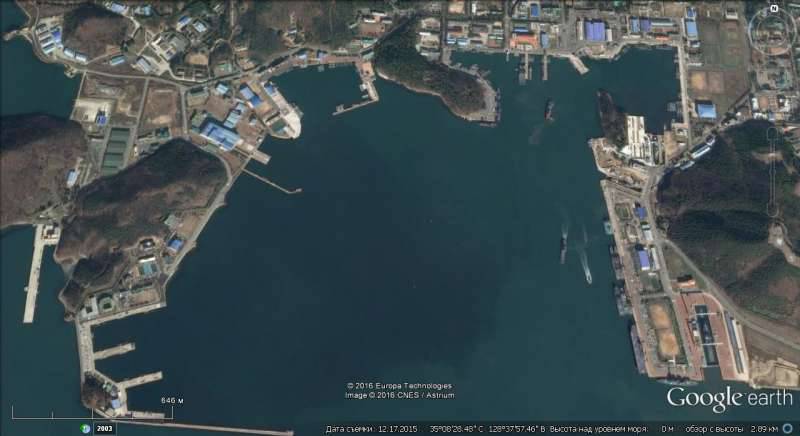 The only US naval base on the Korean Peninsula is Chinhai Port (Commander Fleet Activities Chinhae). At the base, in the past, American warships, including those with nuclear power plants, stopped for repairs and maintenance. At the moment, here is the central base of the Navy of the Republic of Korea.

In South Korea, there are two major US air bases: Kunsan (Kunsan Air Base) and Osan (Osan Air Base). The Kunsan air base with a concrete runway, 2700 meters in length, is located in the western part of the Korean Peninsula on the coast of the Yellow Sea, 240 km south of Seoul. The airbase is jointly operated by the US Air Force and the South Korean Air Force. 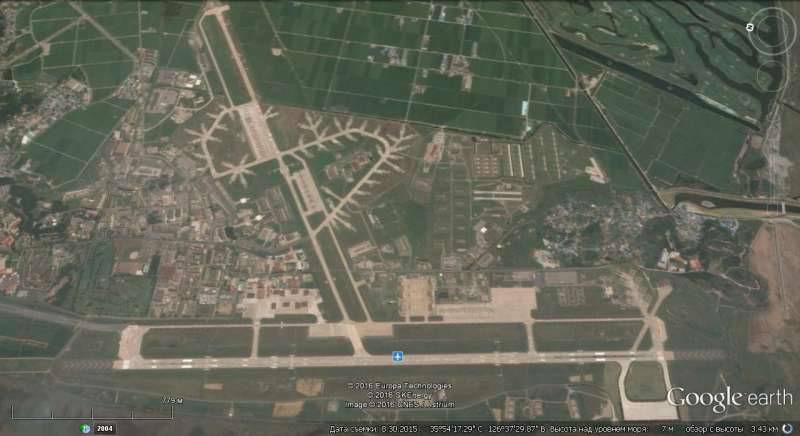 The air base was built during the Korean War and began operating in April 1951. Initially, it housed A-26 piston bombers and F-84G jet fighter-bombers, later they were replaced by F-86. After the incident with the American reconnaissance vessel "Pueblo" in Kunsan in January 1968, the F-4D 4 th tactical fighter air wing settled. In September, the 1974 of the year after the end of the Vietnam War, the “Phantoms” of the 8 Fighter Wing (8 FW) flew here from Ubon Air Base (Ubon Air Base) in Thailand. In 1992, the wing was reorganized into the 8 th Fighter Wing. Currently, this aviation unit is armed with F-16C / D fighter jets. The airbase from air strikes is covered by the battery of the South Korean air defense missile system Hok and the American battery of the air defense missile system Patriot. 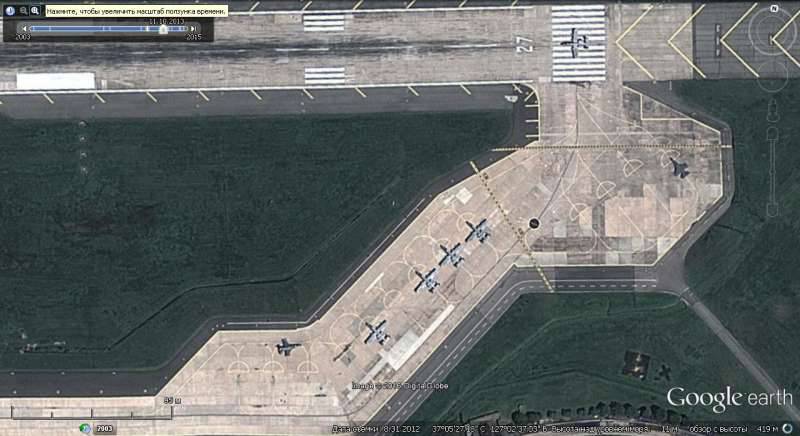 In February 1951, the Osann airbase area, located 60 km south of Seoul, was the site of fierce fighting between North Korean and American forces. In 1952, after repairing the runway, piston fighters P-51D and jet F-86 began to make combat missions from here. At the end of 50-s, after the reconstruction of the airfield and the lengthening of the concrete strip to 2700 meters, military transport aircraft C-54 and C-119 were based here. In the 1968, the F-106 interceptors were deployed from the United States. After the withdrawal from Vietnam to Osan airbase, the 51 aircraft of the F-4D / E and OV-10, the 19 tactical support and surveillance squadron, redeployed. From here, high-altitude reconnaissance U-2 regularly flew towards the line of demarcation from the DPRK.

After the re-equipment of the 51 air regiment on the F-16, the construction of highly protected concrete shelters for aircraft began at the air base. This was dictated by the appearance in the DPRK of operational-tactical missile systems created on the basis of the Soviet P-17 missiles. 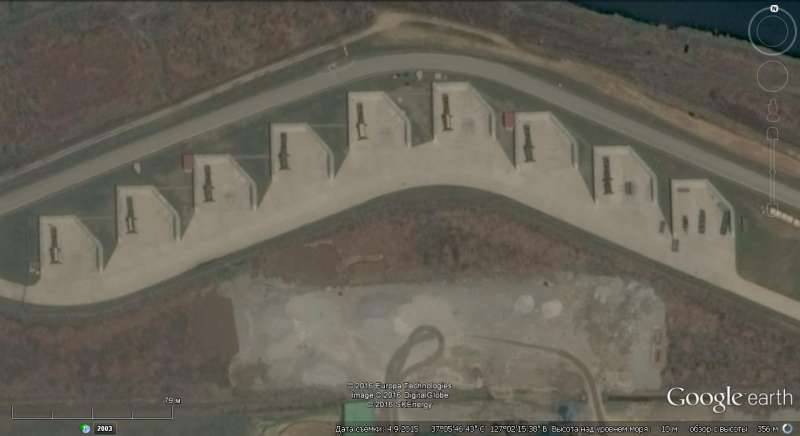 In 1993, in the vicinity of the airbase, two Patriot air defense missile systems were deployed, which are part of the 35 Brigade of air defense. One of them with launchers, oriented to the north, deployed close to the runway.

At the end of the 2009 of the year in the South Korean press, information appeared that from the Osan airbase in the direction of the DPRK makes reconnaissance flights of the UAV RQ-170, made using stealth technology.

At the beginning of 2016, after the next round of exacerbation of the situation on the Korean Peninsula, the American strategic bomber B-52H flew through the airspace of the Republic of Korea. 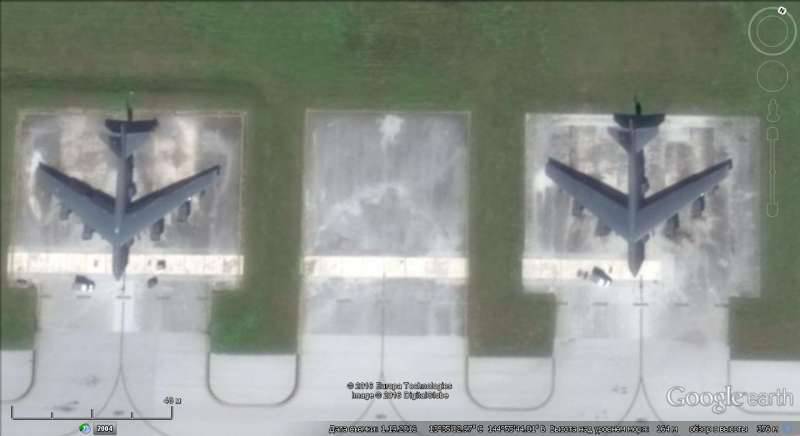 This aircraft is capable of carrying nuclear weaponmade a flight from Andersen Air Base (Andersen Air Force Base) on the island of Guam. The territory of Guam, which is the southernmost in the Mariana Islands archipelago, has the status of unincorporated organized territory (that is, not part of the United States, but owning them).

The Guam Air Base was created in 1944 after the Japanese were knocked out of the island. At the end of the construction of the runway, the B-29 314 of the bomber wing was housed here. In the post-war period, in addition to B-29, B-36, B-47, B-50 bombers and KV-29 tankers were based at the airbase, at the beginning of 60's they were replaced by B-52. Since June 1965, B-52, flying from Guam, have been involved in bombing North Vietnam. Especially intensive bombing was carried out during the operation Linebacker II. It involved more than 150 bombers who made 729 sorties during 11 days. After the fall of South Vietnam, about 40000 refugees passed through Andersen air base on their way to the USA. 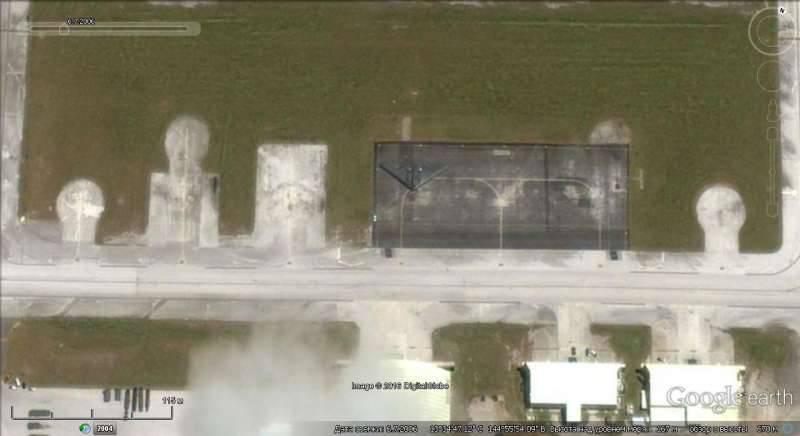 Currently, Andersen Air Base, under the command of the 36 Air Wing Command, is used as an intermediate airfield for strategic bombers. On a permanent basis, there are up to ten B-52 here, and B-2 invisibles regularly visit the airbase. 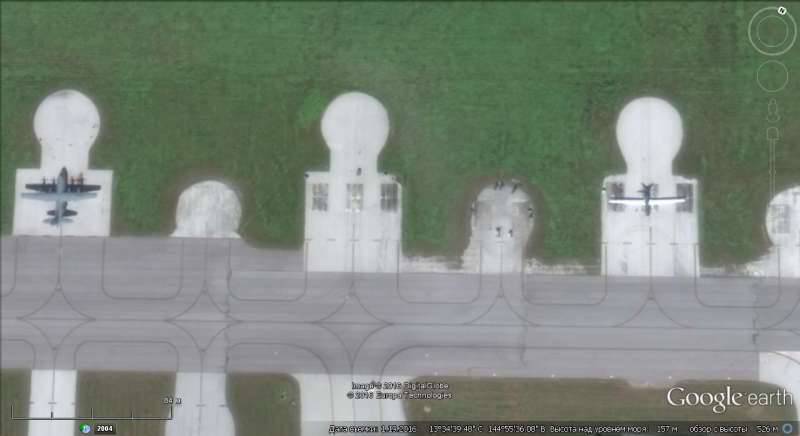 In the past, the Andersen airbase played an important role as a staging post during the transfer of military goods and combat aircraft to different parts of the world. In addition to the bombers, the airbase also has military transport aircraft C-17 and C-130H, as well as flying tankers KS-135R. At the moment, the airbase is home to several UAVs RQ-4 Global Hawk, making long-range patrol flights over the Pacific Ocean. 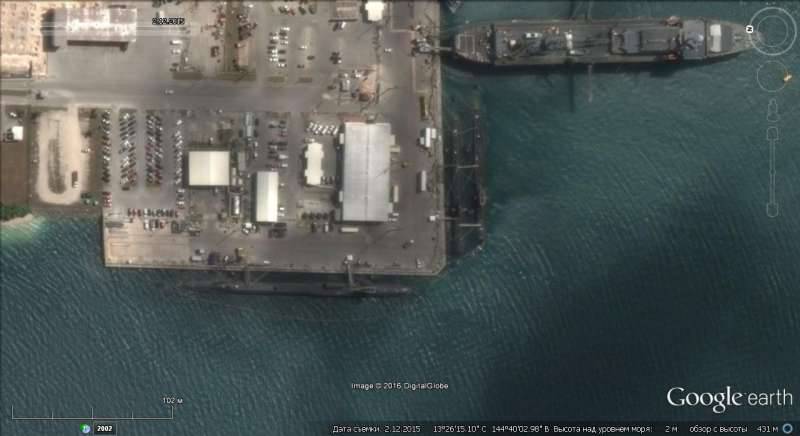 Satellite image Google Earth: US submarines in the parking lot of the naval base of Guam

In the serving western part of the island is the naval base of Guam (Naval Base Guam), administratively combined with the Andersen air base. The base is assigned to 15 multipurpose nuclear submarines of the Seventh Fleet of the US Navy. During combat patrols, the base for emergency repairs, maintenance and rest of the crew enter the submarines of the "Los Angeles" type. 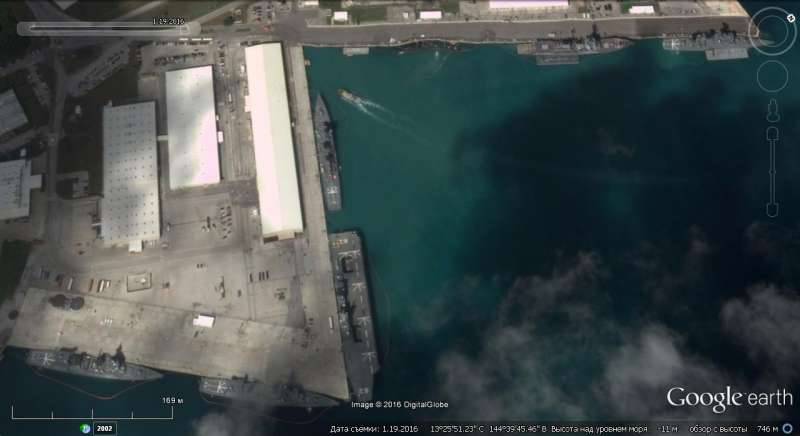 Google Earth satellite image: warships in the Guam naval base

There are also three ocean-class coast guard vessels. Guam is regularly visited by warships of the Australian Navy and the Japanese Self-Defense Forces.

Japan, perhaps, has the highest density of deployment on its territory of American military facilities among other states. In fact, the country is still under occupation, and its significant part is controlled by the American military administration. The unwillingness of the US authorities to drastically reduce their military presence is explained by the fact that Japan has long become a “unsinkable aircraft carrier” and a forward outpost of the American army in the Asia-Pacific region. In addition, the presence of large American military contingent in many respects restrains the global political ambitions of the Japanese leadership and allows the Americans to control Japan’s domestic and foreign policy.

Approximately 60% of US military facilities are located in Okinawa, although this territory is only about 1% of the area of ​​the Japanese islands. At the same time, 14 US bases located on 233 square kilometers cover about 18% of the island’s territory. 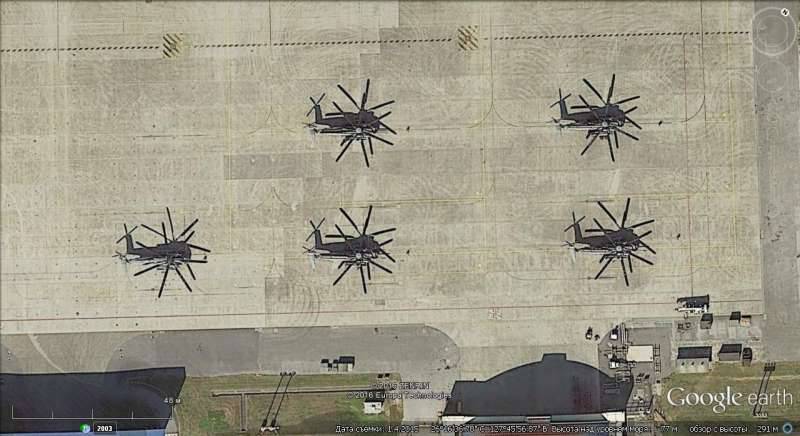 At the US KMP Futenma airbase there is an asphalt concrete runway with a length of 2700 meters. Initially, the airfield was used to house the B-29 bombers and as an alternate interceptor airfield from the Kaden airbase. 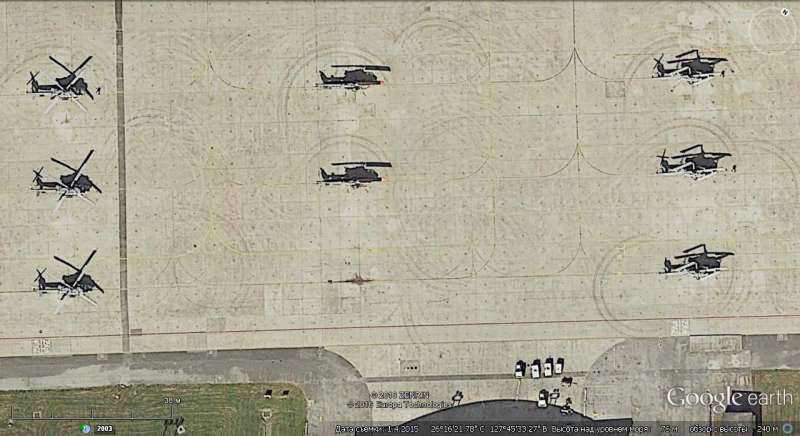 In 1959, he was handed over to the Marine Corps. Since then, the A-4 attack aircraft, A / V-8 vertical take-off aircraft, transport and combat helicopters have been stationed here. 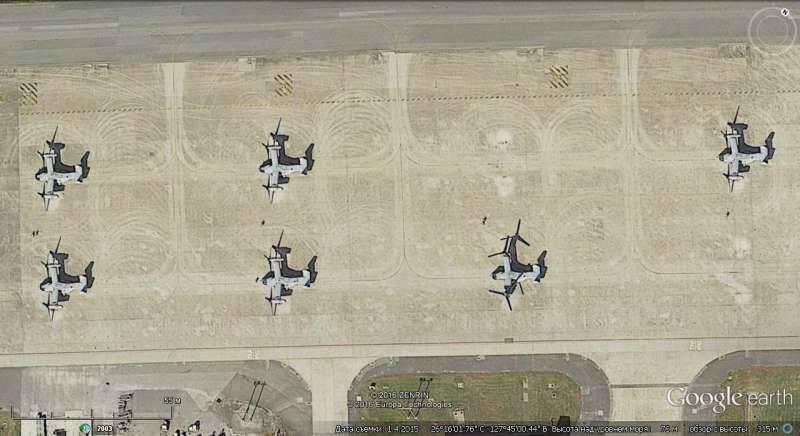 Since 2009, at the airbase, the replacement of military transport helicopters CH-46F and CH-53D with MV-22 converters has begun. "Osprey" combines the possibilities of vertical takeoff and landing of a helicopter and the cruising speed of a turboprop aircraft.

A few kilometers north of Futenma Air Base is the Butler Marine Camp (Marine Corps Base Camp Smedley D. Butler). About 3000 US Marines are stationed in this area. 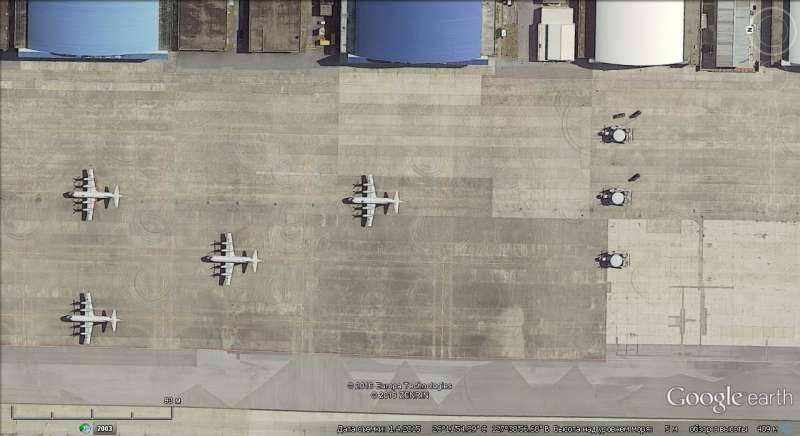 South of Futenma airbase is Naha airfield. It is divided into two sectors - the civilian, where the terminal of the air terminal and the military are located - shared by the Japanese Naval Defense Forces Aviation and the US Navy. In the southern part of the Naha airbase, close to the parking of the aircraft, the Patriot air defense system was deployed. 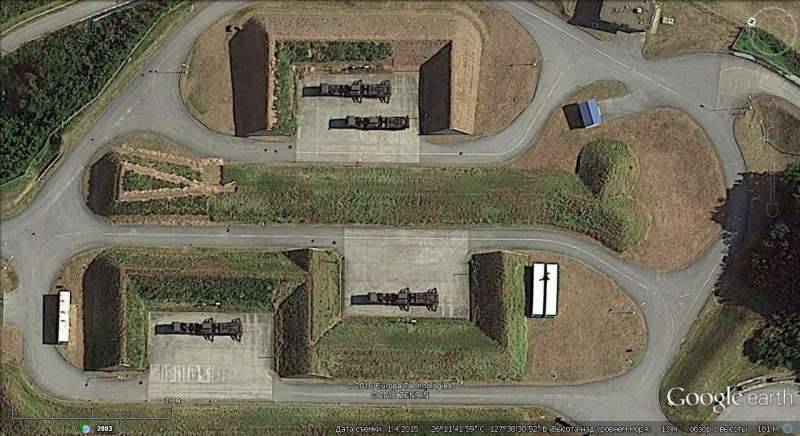 Japan’s largest Kadena Air Base, the largest in Japan, has been operational since July 1945. Soon after the capture of Okinawa by American troops, the engineering and sapper service of the 7 Infantry Division of the US Army began construction of the runway. From here to the capitulation of Japan, A-26 and B-29 bombers made sorties, and they also struck DPRK objects during the Korean War. In the 1954, the F-86 18 fighter jet wings arrived here in the 1958, they were replaced by the F-100. Since 1960, the RF-101 15 tactical reconnaissance squadron has been based at Kaden airbase. In the 1968 year, “Voodoo” was replaced by RF-4C, which served until the 1989 year. In 1979, the first F-15A appeared on the airbase. At the moment, the F-15-generation F-5А fighters are based here in conjunction with the F-22C.

In addition to the fighters at the airbase, the DRLO E-3D aircraft, reconnaissance aircraft RC-135 V / W, refueling aircraft KS-135R, military transport C-130H and C-12, as well as special operations forces MS-130 are also based on a permanent basis and base patrol P-3C. 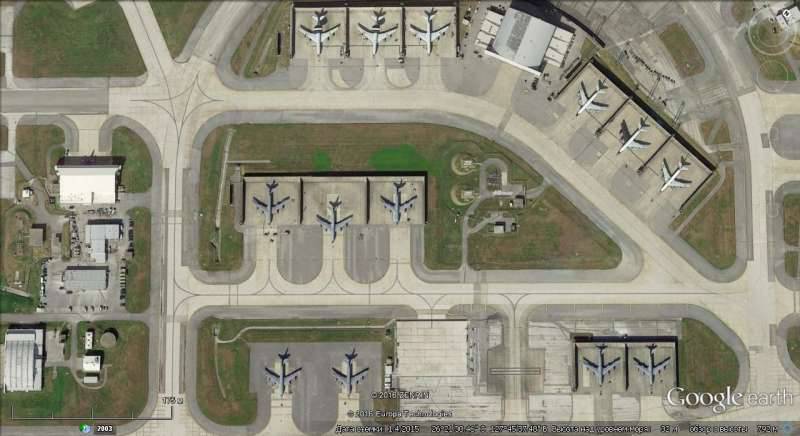 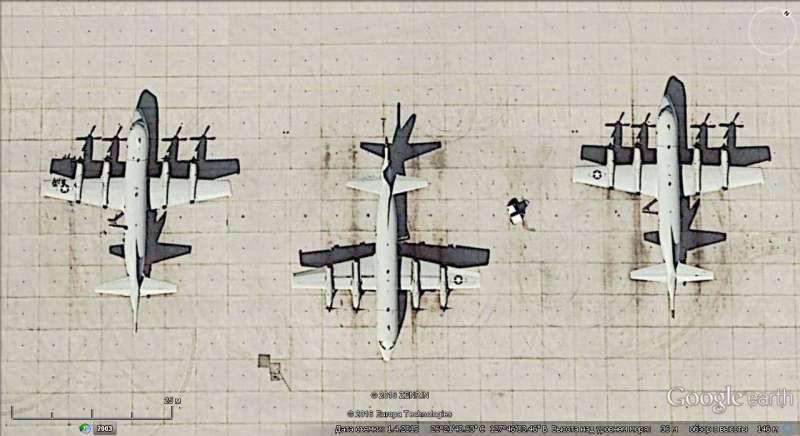 In the 2012 year, two heavy RQ-4 Global Hawk UAVs were based here for reconnaissance flights in the direction of the DPRK. In November, the 2006 of Fort Bliss, Texas was transferred to the Kaden airbase by a battalion of the 31-th anti-aircraft brigade as part of the four Patriot PAC-3 batteries. 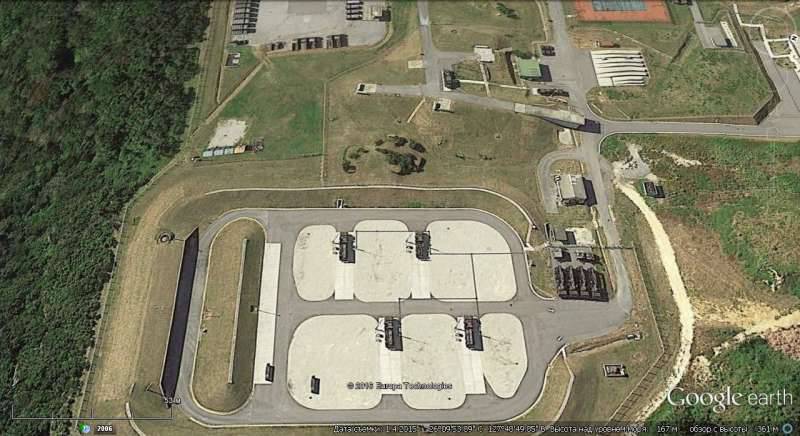 Satellite image of Google earth: launchers of the THAAD PRO system in Okinawa

In 2012, information appeared about the deployment of the THAAD mobile missile defense system in Okinawa to protect against North Korean ballistic missiles. The THAAD launchers are located in the southeastern part of the island, in the former positions of the Hawk air defense system.