April 28 2016
7
On the eve of the Russian capital opened a conference on international security, which is held on the initiative of the Ministry of Defense. This is the fifth such forum, which gathers experts in the field of security and representatives of military departments of various countries of the world - from countries both from near and far abroad. The V conference brought together more than 500 participants from 80 countries of the world and from among the leaders of major international organizations, including the UN, the OSCE, the International Committee of the Red Cross (ICRC), and others.


The geography of delegations is vast: in addition to representatives of the countries of the Commonwealth of Independent States, these are delegates from China, Serbia, Afghanistan, Egypt, Iran, Iraq, Syria, the Philippines, Vietnam, Brunei, Singapore, Myanmar, Cambodia, Indonesia, Thailand, Argentina, etc.
The Moscow Security Conference was opened by Russian Defense Minister Sergei Shoigu, who addressed the participants in such a representative forum with a welcoming speech. In this speech, the main contemporary challenges that the states of the most different regions of the planet have to face are identified. 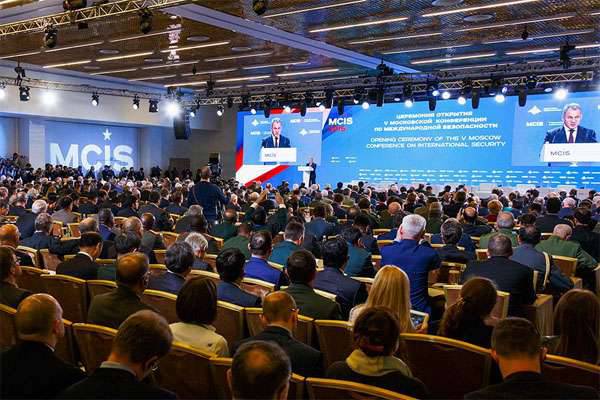 I welcome you to the next Moscow conference on international security.

For the fifth year now, the leaders of military departments, prominent political and public figures, authoritative representatives of academic and non-governmental organizations from different countries gather in spring in Moscow for a serious and frank discussion about the problems of peace and war.
Traditionally, we bring to the discussion the most important international and regional issues, on the solution of which the security of ordinary people and entire states depends.

I am confident that the key topic of this conference - terrorism as the main threat to international stability - is today the most pressing for all of humanity.

Since our last meeting, the world has not become more durable. Despite the joint efforts of Russia and other states, in a number of regions the situation is far from stability. They are fighting. Developed block thinking. There is a haunting line of some countries dictating the will of the international community, using its military advantage.

The world, indeed, is far from stability. Wars and smoldering conflicts manifest themselves in various parts of the world. These are Donbass, Nagorno-Karabakh, Syria, Libya, Sinai Peninsula (Egypt), Afghanistan, Iraq. The terrorist threat manifests itself in the countries of Europe. The US National Intelligence says it knows about the presence of so-called “sleeping” cells in the EU countries (Germany, Britain and Italy), and even knows about the preparation of these cells for committing terrorist acts in these countries. However, the main question remains unclear: this information, voiced recently by Mr. Klapper, gives those Europeans a reason to feel safe, or does the knowledge of Americans do not give any guarantees of protection to Europeans? ..

Russia, gathering representatives of the expert community and high-ranking military from dozens of countries around the world, proposes not only to state facts about the threat from international terrorism (that is, not to be limited to talking), but to follow the path of real consolidation of efforts to counter these threats. Moreover, the opposition of the present, and not attempts to sit out behind the curtain at the moment when Russia itself is making serious efforts to combat the terrorist plague.

It’s just that the list of delegates of the Moscow Conference says that for individual countries of the world (to be more precise, for the USA and their vassalage) the fact that Russia offers to deal with real threats is unacceptable.

The other day, US President Obama said that Vladimir Putin was wrong when he said that the expansion of NATO, the creation of some alternative WTO economic sites "for their own" is playing against Russia and the Russian authorities. According to Obama, this opinion of the Russian president is wrong. And it’s hard not to agree with the press secretary of the Russian President Dmitry Peskov, who noted that Obama could be believed if his words did not diverge from real actions. What kind of real and pragmatic cooperation with the same North Atlantic alliance can we talk about if all the latest NATO acts begin with the words “Russia is the number one enemy for the whole alliance”? It is difficult to talk about a pragmatic partnership, when the United States continues to push the missile defense system to the Russian borders and try to draw more and more countries into the alliance.

Although Russia is ready for dialogue, even in such conditions. But ... "partners" are not ready to conduct open dialogues with Russia in the person of the same States and countries that Washington used to look into their mouths. They will not drop in - Washington can grind and press the red plum button, to which virtually none of the representatives of American vassalage is today ready. In this case, the main mantra is the same: “Russia can commit aggression”. And this mantra is spoken daily by the representatives of the collective West, actually trying to justify any of their own obscurantism (up to the closure of Russian schools in the Baltic States).

The state of affairs when certain countries are clearly interested in the escalation of confrontation, despite the vital and important need to consolidate efforts, Sergey Shoigu also mentioned:

A tough and uncompromising information war is being waged against Russia.

There are statements about the "existential" threat from Moscow for European states, the need for military deterrence of our country.
As a justification for such actions, the absurd thesis is being replicated that Russia supposedly approached the “NATO threshold”. In general, everything is turned upside down.

Shouts from Brussels and a number of other capitals are heard to us, and if they talk about the possibility of a dialogue, then they will only
questions and, of course, in the tone of a strict teacher, scolding negligent student.

At the same time, the United States and NATO launched the deployment of military infrastructure near the Russian borders, implementing dangerous anti-missile plans, and increasing military spending. Such actions force us to take adequate military-technical response. At the same time, I want to say responsibly: we are against the arms race.

Obviously, attempts to isolate Russia made during the acute phase of the crisis in Ukraine failed. The act of Turkish aggression against the Russian bomber in Syria clearly demonstrated that the alliance was hostage to the adventurous policies of its individual members.
We are not against the restoration of relations with NATO, but this can be done solely on the basis of reciprocity, respect for national interests and with equal and indivisible security for all.

At the same time, we prefer to communicate with the Alliance at the negotiating table rather than through weapons sights.

Indivisible security for all is a stumbling block for "partners." If the majority of participants in the Moscow Security Conference share this approach, and are willing to look for joint solutions to combat terrorism, maritime piracy, and counter drug trafficking, those who decided to “isolate” Russia are clearly trying to build a different system of world values. This is the very system of values ​​that already manifests itself in Afghanistan, Libya, Iraq, Syria in Ukraine - that is, everywhere where the “democratizers” got in their time under the banner of building a “modern democratic society”. And everywhere they managed to announce success. Dozens of civilians die at the hands of terrorists every day in Iraq and Syria - “success”, Ukraine is heading into the economic abyss against the background of incessant civil strife and oligarchic wars - “success”, the area of ​​opium poppy plantations in Afghanistan broke all records for all history the existence of this country is also “success” ... It turns out that the more blood and chaos, the more successful ... This slogan is already time to hang over the central entrance to the Pentagon or NATO headquarters, because it really reflects the essence of the work of organizations capable of launching the destruction of not only individual countries, but also whole cultures for the sake of their interests.

I would like to think that during the Moscow Conference its participants will work out their own ways of solving numerous problems of countering modern threats. In any case, it is better to meet and discuss the painful, rather than try to reduce the work to individualism. And given the fact that delegations from the 80 states of the world are participating in the conference, the discussion can really bring positive results.