April 28 2016
29
Political observers called the last big six-day tour of US President Barack Obama through the capitals of their main allies a failure. They recalled the revealingly cold meeting of Obama in Saudi Riyadh, the mass protests in German Hanover, the arrival in pajamas of the two-year-old grandson of the British Queen George to the American guest, and many more particulars that characterize the current attitude of the world elite to the US president ending his term. 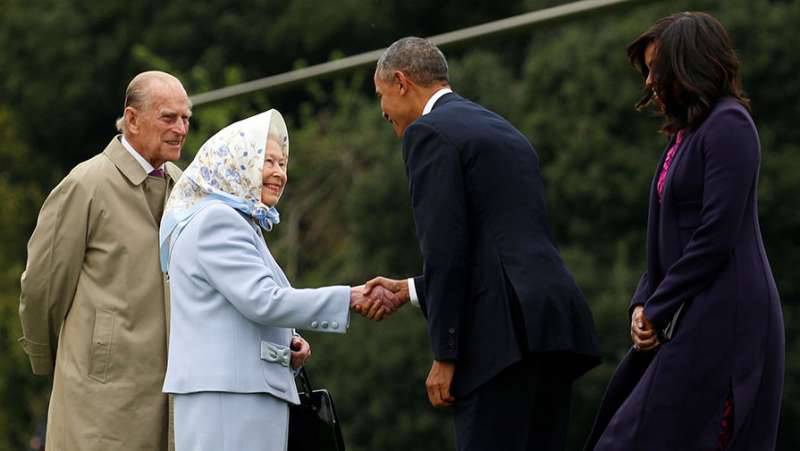 America puts Britain at the tail of the queue

At the same time, Barack Obama’s trip overseas abounds in new meaningful statements by the current American leader. Characteristic in this sense are his meetings in London. Here, Obama acted as guardian of European unity. He did this thoroughly. The visit of the US President was preceded by his article in the Daily Telegraph daily, Obama was later interviewed by the BBC television, and at the end of the program he held a press conference with British Prime Minister David Cameron and spoke to young people at Lindley Hall in London.

The main theme of the appeal of the American president to the British public was his concern about the possible exit of the UK from the European Union. The impression was that Barack Obama arrived in London not to congratulate the royal person on his jubilee, but to persuade the British not to refuse membership in the European Union. The United States sees in Britain a conductor of their interests in a united Europe, a kind of counterweight to the Paris-Berlin axis. Therefore, Washington categorically does not like the expected exit of London from European structures.

In the course of the trip, the tone of the statements of the American president also changed. In a newspaper article, Obama convinced the British: “A strong Europe is not a threat to the global leadership of Britain, it strengthens it. The United States sees how your important voice ensures that Europe maintains a strong position on the world stage and makes the EU open, future-oriented and closely connected with its allies on the other side of the Atlantic. ”

Then, according to American tradition, he turned to threats. In an interview with BBC News, Obama has already scared local television viewers that the United States will favor trade deals with the European Union, large blocs, country alliances, and Britain “will be at the tail of the line” in its policies. “The UK will not be able to negotiate with the United States about anything faster than the European Union. We will not upstage relations with our main trading partner. And it may take ten years for us to come to an agreement, ”the US president said at the BBC.

So at once, from a major ally and partner, Britain was turning into a second-class country, little interested in the United States. At one point, it seemed to be a bluff from a Washington guest. Points over the "and" arranged his meeting with young people. The very format of the audience suggested a discussion of promising topics and directions. And they sounded.

By inertia, Obama warned British youth of “isolationism” (“I am here to ask you to abandon self-withdrawal calls from world affairs”), but he spoke more about the transatlantic partnership. Perhaps, for the first time, the President of the United States opened the veil of secrecy over new trade unions, which are created in an environment of such a degree of closeness that even US congressmen are demanding to disclose the details of already concluded and still preparing interstate transactions.

Young people did not dedicate Obama to high secrets, but he explained the ideology of creating the Transatlantic Trade and Investment Partnership between the United States and the European Union. “Achieving the conclusion of a treaty is a difficult task,” the distinguished guest from Washington said to the young Londoners, “because each country has its own local interests and, in order to reach an agreement, each country must give up something.”

This failure should materialize into universal business opportunities, uniform requirements for companies in two economic spaces on both sides of the Atlantic. Well, and in order that no one interferes with the “opportunities of companies”, it is planned to create an international corporate court. Business will be lodged there with claims against states and governments, since, according to Obama, in the twenty-first century, in the context of globalization, trade agreements become higher than state interests.

The number of supporters of the Transatlantic Trade Partnership has fallen sharply in Germany.

Europeans guessed something similar. At the end of 2014, a petition was sent to the European Commission against concluding a partnership, the signature of which left 1,1 a million people. A year ago, mass protests against the transatlantic agreement were held in more than 500 points. The largest was the protest event in the Spanish city of Madrid. 20 thousand people took part in it.

This time by the arrival of Obama, German Hanover protested. On the streets here took more than 35 thousands of people. They were protested by 20 social unions representing trade unions, anti-globalists, environmentalists, consumer associations, and opposition parties. According to surveys ordered by the Bertelsmann Foundation, in recent years in Germany the number of supporters of free trade with America fell from 55 to 17%.

People fear a decline in European standards, the appearance of genetically modified products for sale, and changes in labor laws in favor of corporations. Other “joys” are also predicted, the realization of which in the interests of transnational business can absorb even the sovereign rights of states.

This is what Georg Jansen, the head of the German farmers' union says: “In the EU, if there is even a suspicion that the product is harmful, then it cannot enter the market. In America, they rely on the principle of knowledge and say: "Until there is scientific evidence of harm, the product may be on the market."

And there are many such differences. But more people care about ignorance. “The population is not involved in the negotiations, and the parliamentarians are not partly involved in them. We oppose a policy that is being closed behind closed doors. Therefore, we call for greater democracy and transparency, ”says Simone Peter, co-chairman of the Green Party.

The theme of "transparency" is very relevant. Not so long ago, the German government in the conditions of the strictest secrecy acquainted the ministers and deputies of parliament with the text of the agreement on the Transatlantic Trade Partnership. It happened in the library of the Ministry of Economics. Dedicated Germans were allowed to familiarize themselves with the document provided they lack smartphones, cameras and laptops. So it remains only to guess what other surprises will bring the agreement, so aggressively promoted by the American president.

The figure, of course, is inferior to the trillion-dollar turnover of American transnational companies, but it pleases the soul of German business, which has faced problems in Europe and the world. Today, according to representatives of business circles and economists of Germany, the agreement on the creation of a free trade zone between the EU and the USA is in all respects beneficial to German enterprises. But the German society began to think differently and more and more actively protests against the trade agreement being prepared in secret.

Now, many in the world call the losing duck, the expiration of his term as American president, wondering what memory he will leave stories. Just with this, Barack Obama seems to have decided. He expects to issue a Transatlantic Trade Agreement by the end of the year. Together with the already signed Trans-Pacific Treaty, these two documents should radically change the economic picture of the world. In it, according to the plan of American strategists, trade agreements will become higher than the sovereign interests, and, therefore, the power will now shift to transnational business. Would the world agree with that? This question has not yet found its answer ...