April 28 2016
51
Italian writer, journalist and public figure Giulietto Chiesa told the world about the “2.0 Russophobia”, which the United States, which controls the major media, conducts. “The goal of Russophobia is the psychological preparation of people for war with Russia, and this will be a global catastrophe,” says Chiesa. Russia needs to explain to the world that it has a “mission to protect humanity,” a publicist believes. 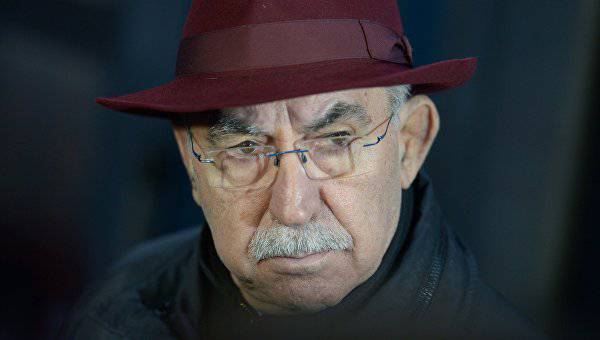 Giulietto Chiesa is a writer and leftist journalist. In the last century, for almost ten years, he was the chairman of the Genoa Association of the Italian Communist Party (1970-1979). Then, from 1980 to 1990, Chiesa was his own correspondent for the newspaper L'Unita in Moscow, and from 1990 to 2000. - newspapers "La Stampa". He later made a political career: he had the mandate of a deputy of the European Parliament (2004-2009), taking the chair of the vice-president of the Commission on International Trade and participating in the activities of several other commissions. In 2010, Comrade Chiesa founded the “Alternative” social and political movement in Italy.

Chiesa became famous as the author of several books. One of the last: “Russophobia 2.0: disease or weapon West. " This book has already been translated into Russian and published in Moscow. On its pages, the author talks about why Russophobes have chosen Putin as their goal, about how Russophobia manifests itself in politics, and explains how to resist this shameful phenomenon. In the current world, full of false Western propaganda, an increase in hatred towards Russia is observed, the author believes.

In a conversation with a reporter RIA News" Chiesa said that his book was originally called “Russophobia 2.0”, but the publisher in Italy suggested another name: “Putinophobia”. And the author liked it.

“I agreed with this proposal, because today in Italy and in the West as a whole, Vladimir Putin truly personifies modern Russia. You can interpret this situation as you please, but the fact remains, ”noted Chiesa in a conversation with a journalist.

“Vladimir Putin,” he added, “has long become one of the most popular world politicians. And at the same time the so-called global media systematically spread slander about him. But it is interesting that often they achieve the exact opposite result. So I wanted to understand how it happens that so much effort and money is spent to slander the Russian leader, and his popularity is steadily growing. ”

25 April in the press center of the IIA "Russia Today" in Moscow, the presentation of the book. The writer himself spoke about the roots, development and nuances of Russophobia.

“As a resident of Europe, I systematically hear accusations against Putin. Russia is called the aggressor, accused of a global crisis. Russophobia is a political and strategic tool for preparing people's thinking for war. The next target of the information attack will be China, if the West manages to break Russia, ”the journalist quotes "Sputnik".

He spoke about his information initiatives: “I created the Italian channel pandoratv.it, we broadcast on the Internet. I personally translated the interview for Vladimir Putin on the air. Every day we have about 60-80 thousands of viewers. They are interested in what is happening in modern Russia, they ask questions. On the ninth of May we will broadcast the Victory Parade live. I am sure that other Italian channels will not do this. ”

Chiesa believes that the rulers of Europe are dancing to the tune of the United States: “With the current leaders, Europe can hardly keep a decent face. All of them are controlled from the White House. A new political elite is needed, the old parties are gradually dying. In five years, the political landscape will not be the same. ”

Where did Russophobia come from? The publicist is convinced that the reason for her appearance is the poor awareness of Europeans about Russia's position on political issues. The current time, the writer considers insane. Who can stop the madness? Russia!

“We live in a time that is much worse than the Cold War - then at least there was a balance between political poles. Today there is no equilibrium. Russia is the only country in the world that can stop this madness, ”says Comrade Chiesa.

"The American rulers set as their goal the destruction of Russia," said Chiesa to the correspondent. "Evening Moscow". - The next "enemy" is China. Nowadays, the methods of information and economic war are being used against Russia, but its instigators from the USA dream of drawing Russia into a real war. It seems to me that frankly crazy politicians are in charge in Washington today. They overestimate their own power and refuse to understand that Russia's military might can destroy the West. ”

According to Chiesa, Russophobia today prevailed on the new technological and communication platform (2.0), absorbing the old stereotypes about the Russian way of life. This process is conducted by the USA, which controls the largest media holdings through financial capital. The arrows of the Western information machine are directed against “Putin's Russia”, on which they labeled the “aggressor”. "The goal of Russophobia is the psychological preparation of people for war with Russia, and this will be a global catastrophe," quotes Kyozu. "Russian Planet".

The US elite has set the task to make the 21st century American, the writer is sure. Washington's key task is the elimination of Vladimir Putin. Putinophobia has acquired monstrous proportions in the West: “Putin is the devil. The media describe the Russian president, starting precisely from this concept. At the same time, Russia is represented as the most important enemy of Western civilization. ” “The problem is,” adds the publicist, “that pressure from overseas is very strong in the elites and the media environment. However, the attitude towards Russia after the operation in Syria began to change for the better. Russia really fought with those who blew up European cities. Elite at a loss. Everyone is wondering: who will be next? And people begin to doubt. At the first stage, they refuse to believe the media; at the second stage, they will demand a change of leadership. ”

“The USA is an empire, and the rest of the states are colonies for them,” noted the Italian. - If a colony raises an uprising, then it must be punished. And the people who really rule America (this is about the largest bankers 10) will stop at nothing. They have a very low intellectual and moral level. They are even ready to start a nuclear war. ”

The Italian journalist believes that Russia needs to take advantage of the situation and rehabilitate its image, to convey to people the fundamental idea that is being formed: “There is no fundamental idea in Russia yet, but it is being formed, and this can be seen from Putin’s speeches. Russia needs to explain to the world that it has a mission to protect humanity. It protects the interests of the whole world. And she needs to promote these ideas. At the moment, Europe knows nothing about Russia. ”

Well, not really nothing. Not yesterday the Russia Today TV channel, which broadcasts in different languages, including on the Internet, offers an alternative view on events, covering those stories that did not appear on the screens of the world media, and introducing the audience to the Russian point of view. . On 11 May 2015, the number of video views on the English-language RT page on YouTube exceeded 1,4 billion. The multilingual media project “Sputnik”, the link to which is given in the text above, is also developing rapidly. Live a popular project "Military Review", the state, alas, is not funded, but has a Russian-speaking audience in the Baltic republics, in Germany, Great Britain, Bulgaria, Hungary and other European countries, as well as in the USA.

In addition, not only the media breathes politics. In Syria, waging an active struggle against the terrorists of the IG, Moscow made it clear to the whole world: Russia is ready not only to resist the bloodthirsty Islamists, but also to help countries who do not want to dance to the tune of the White House. Today, even Saudi Arabia with piety looks towards Moscow, at the same time showing contempt for the American “hegemon”.