About cuts and kickbacks in Tsarist Russia 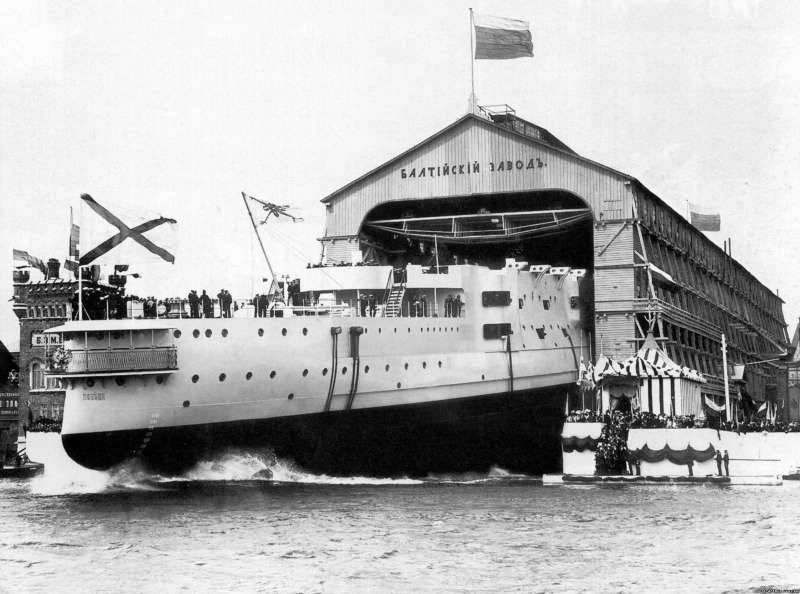 The development of a fire control system for the battleship Borodino was the greatest task entrusted to the Institute of Fine Mechanics at the court of his Imperial Highness. The creation of machines involved the Russian Society of steam power plants. Leading research and production team, whose development has been successfully used on warships around the world. The weapons of Ivanov and the self-propelled mines of the Makarov construction were taken as weapons systems ...

You are all there on the upper deck! Stop the ridicule!

The fire control system was French, mod. 1899. The instrument set was first presented at an exhibition in Paris and immediately acquired for the RIF by its commander, Grand Duke Alexey Alexandrovich (according to the recollections of relatives, le Beau Brummel, who almost permanently resided in France).

The Borodino project itself was a modified project of the battleship Tsesarevich, designed and built for the Russian Imperial fleet specialists of the French shipyard “Forge and Chantier”.

In order to avoid misunderstandings and unjustified recriminations, an explanation should be made for a wide audience. Good news - most of the foreign names in the design of the EDB “Borodino” belonged to systems produced under license in Russia. On the technical side, they also met the highest international standards. For example, the conventional design of the sectional boiler of the Belleville system and the very successful guns of Gustave Kane.

However, already one French shooting control system in the Russian EBRD makes you wonder. Why and why? It looks as ridiculous as “Aegis” on the Soviet “Orlan”.

Great empire with a population of 130 million people, with a high-quality education system (for the elite) and a developed scientific school - Mendeleev, Popov, Yablochkov. And with that all around solid foreign technologies! Where is our domestic “Belleville”? But he was an engineer-inventor V. Shukhov, an employee of the Russian branch of Babcock & Wilksos, who patented a vertical boiler of his own design.

In theory, everything was. In practice, the continuous Bellevilly, brothers Nikloss and the Tsesarevich Bank at the Forge and Chantier shipyard as a reference sample for the Russian fleet.

But, what is especially offensive, the ships at domestic shipyards were built many times slower. Four years for EDB Borodino versus two and a half years for Retvizan (Cram & Sans). Now you shouldn't be like a recognizable hero and ask: “Why? Who did it?" The answer is on the surface - a lack of tools, machines, experience and skillful hands.

Another problem lies in the fact that even with “mutually beneficial cooperation” in the conditions of an “open world market”, something is not observed in the Makarov's torpedoes in service with the French fleet. And in general nothing is observed that would indicate the exchange of technologies. Everything, everything according to the old, proven scheme. We give them - money and gold, they in return - their technical innovations. Belleville boiler. Mina Whitehead. IPhone 6. Because the Russian Mongols in terms of the creative process are complete impotent.

Speaking specifically for the fleet, even licenses are not always enough. It was necessary to simply take and place orders at foreign shipyards.

It is no longer a fact that the cruiser “Varyag” was built in the USA. It is much less known that the second participant of the legendary battle, the gunner “Koreyets”, was built in Sweden.

The regular participant of the “Military review” spoke very causally about this:

Well, it is clear from the Germans ordered ships. They built well, the cars on them were excellent. Well, it is clear in France, such as an ally, plus kickbacks to the Grand Dukes. You can understand and order the American Crump. He did it quickly, promised a lot and rolled away any way as well as the French. But we, it turns out, with the king-father, even in Denmark, ordered cruisers.
Comment from Edward (qwert).

Irritation is well explained. With that colossal gap in technology and labor productivity, the construction of a series of armored cruisers is equivalent to the construction of a modern cosmodrome. Giving such “fat” projects at the mercy of foreign contractors is unprofitable and inefficient in all respects. This money must go to the admiralty shipyards and move the domestic economy. And with it to develop their own science and industry. So everyone wanted to do at all times. Steal from profits, not losses. But we have not done so.

We have done differently. The scheme was called "to steal the ruble, harm the country in a million." French contract, they who need it - roll back. Their shipyards sit without orders. The industry is degrading. Skilled frames are not needed.

There was a time they even tried to build dreadnought battleships, so it would be better not to try. With the implementation of the most complicated project, all the shortcomings of pre-revolutionary Russia were clearly manifested. The widespread lack of production experience, machine tools and competent professionals. Multiplied by incompetence, nepotism, kickbacks and mess in the offices of the Admiralty.

As a result, the formidable “Sevastopol” was built for six years and by the time the St. Andrew’s flag was raised, it was completely outdated. The Empress Maria was no better. Look at their peers. Who joined them at the same time in 1915? The case is not the 15-inch “Queen Elizabeth”? And after that tell me that the author is not objective.

They say there was still a mighty "Ishmael." Or was not. The battle cruiser “Ishmael” turned out to be an unbearable burden for RI. Quite a strange habit - to pass off as an achievement what was not done.

Even in peacetime, with the direct assistance of foreign contractors, the ships turned into protracted over and over again. With the cruiser, everything turned out to be even more serious. When the degree of readiness of “Izmail” reached 43%, Russia got involved in a war in which there was no goal, an objective benefit, and in which it was impossible to win. For “Ishmael” it was the end, because part of its machinery was imported from Germany.

If you have a conversation outside politics, the LCR “Izmail” was also not an indicator of the flourishing of the empire. In the East, dawn has already broken. Japan rose to its full height with its 16-inch Nagato. This, from which even their British teachers were taken aback.

Time passed, no progress was observed. From the point of view of the author, the industry in Tsarist Russia was in complete decline. You may have a different opinion from the author, which, however, will not be easy to prove.

Go down to the engine room of the destroyer “Novik” and read what is stamped on its turbines. Come on, give the light here. Is it really? AG Vulkan Stettin. Deutsches Kaiserreich.

With the engines went wrong from the start. Climb into the nacelle of the same “Ilya of Murom”. What will you see there? Engines brand “Gorynych”? Right, surprise. Renault.

All the facts show that the Russian Empire was trudging somewhere at the very end of the list of developed countries. After the UK, Germany, States, France and even Japan, which, having passed the late Meiji modernization, to the 1910-gg. managed to bypass RI in everything.

In general, Russia was not at all where befits an empire with such ambitions.

After this, the jokes about “Ilina’s light bulb” and the state program for the eradication of illiteracy no longer seem so ridiculous. Years passed, and the country recovered. Fully. It will become a state with the best education in the world, with advanced science and developed industry, which knew how to do everything. Import substitution in the most important sectors (military industry, atom, space) was 100%.

And the descendants of the runaway degenerates will still whine in Paris about “Russia, which they lost.”