Once again to the question about the Remington rifle with a butterfly valve (part 1).

4 May 2016
56
In one of my articles published on the VO website, I talked about the Remington rifle, and the material was prepared based on the publication "Remington Rolling Block Military Rifles of the World" (George Layman. Woonsocket, RIUSA: Andrew Mowbray Incorporated Publishers, 2010 - 240pp ). The author of the book is a unique person in his own way: he served in the US Army for 21 years as a translator from Japanese, but also speaks Korean, German, Hungarian, Swedish, Spanish and Portuguese. He is the author of more than 1100 articles on weapons issues, and has starred in several historical Discovery Channel films as a "talking head". Well, the Remington rifle is one of the areas of his hobby. He collects and studies them. Certainly, the work of such an author deserves attention. At the same time, the previous publication caused a number of doubts among some VO readers. And someone even demanded from me scans of the quoted pages. However, their impatience and excitement is understandable. Not all articles on VO contain links to primary sources. Many therefore think, probably, that the authors are too free to dispose of the material they have, so that reading the text in the original allows you to remove these questions that have arisen, to learn a lot, and to make sure what and how Western historians write about Russia. They are not cheap and often illiterate journalists, and not politicians, but historians, people with good education, who value their reputation. Therefore, I asked my university colleague from the Department of Foreign Languages, Senior Lecturer, Shurupova Irina Vladimirovna, to translate the text that interested readers of the VO, as close as possible to the original source. So, open page 105 of the above edition and start reading: 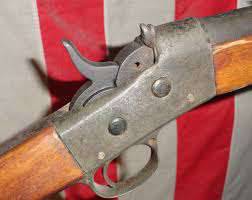 Russia.
From the very beginning, Remington considered Russia as an important and promising customer of a rifle with a butterfly valve. The company did not spare the time and effort trying to draw Russia's attention to its products, but to no avail. In a letter to General Dyer of 23 in May of 1871, Mr. Sam Norris refers to his brother John, who was present at all official trials. But it did not help. Probably no one, including the Norris brothers, knew that Russia had decided to adopt a new rifle, which they could produce on their own. The 1861 in Russia adopted the Berdan-I rifle, which was largely the result of the joint work of Colonel Alexander Gorlov and captain Karl Gunnius with Colt from the United States. The Russians were so determined not to depend on foreign suppliers that in 1871 they abandoned the Berdan-I rifle in favor of the Berdan II single-shot rifle with a sliding bolt because it was better, but because it was easier to produce . As we have seen from the experience of Austrian manufacturers and we will see later on others, the rifle with a butterfly valve was difficult to manufacture, and Russia with its limited industrial capabilities was well aware of the problem of creating a new industry, purchasing machinery, training workers and switching to new weapon and all at the same time. 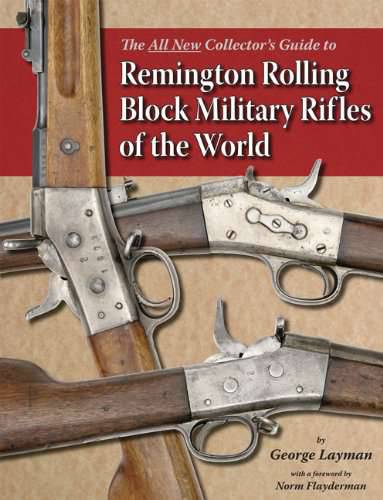 Book cover by George Lauman. In hardcover without delivery, it costs 40 dollars today.

The second opportunity to open the Russian market appeared during the Russo-Turkish War (April 1877-March 1878). At this time, the Remington company was virtually bankrupt, although it did its best to hide it. Samu-el Norris and Watson Squier arrived in St. Petersburg. Prior to this, Squier received a telegram from Colonel Gorlov, in which he urged him to leave for St. Petersburg that evening. Remington & Sons was so broke that Squier had to pay out of pocket for the trip. 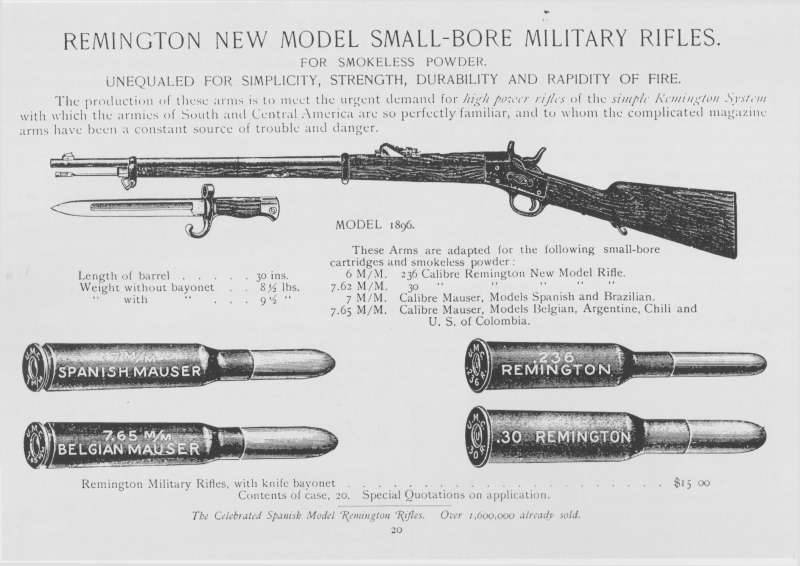 Advertising of the Remington M1896 rifle for cartridges of various calibers.

Gorlov was well-disposed towards the Remington system and did not like Berdan II. He apparently sent a memorandum to the Minister of War General Milyutin with a request to carefully consider Remington. Milyutin showed no interest and wrote a rather caustic note stating that Russia is not the Papal State or Egypt, and that it is very important for Russia to develop its own production of modern weapons.

Nor Norris, nor Squier were not devoted to this correspondence and continued their attempts to interest the Russians with a butterfly valve, and if this does not work out, then with the Remington Keane magazine rifle. They also understood that there could be no question of making new butterfly valves in Russian rifles of Berdan in .42 caliber quickly enough to have hope of receiving an order, so Squier tried to sell them a Spanish model. He wrote to General Barantov: “Although this weapon has the .433 caliber and the Russian rifle, Berdan, the .42 caliber, it was repeatedly found in America that the shell with the Russian Berdan's shell fired quite successfully with the Spanish Remington rifle, with good results in terms of accuracy and range. (The quote is taken from Joseph Bradley's “Weapons for the Tsar”. Univer-City-Press Northern Illinois.)

28 October 1877 Mr. Squier received a brief note from the head of the artillery department, stating that the Russian government does not intend at present to resort to foreign orders for weapons or ammunition.

In fact, Remington sold rifles with a butterfly valve to Russia, but 35 years later, when they were considered obsolete long ago. The Russian contract for rifles is almost unknown. Some authors, namely Phil Sharp and R.O. Ackley mentioned that the Russian 7.62 caliber cartridges were used in firearm rifles in World War I. But they had no specific information. Although some of them may have been used, the order dates from the period immediately after the Russo-Japanese War 1904-1905. 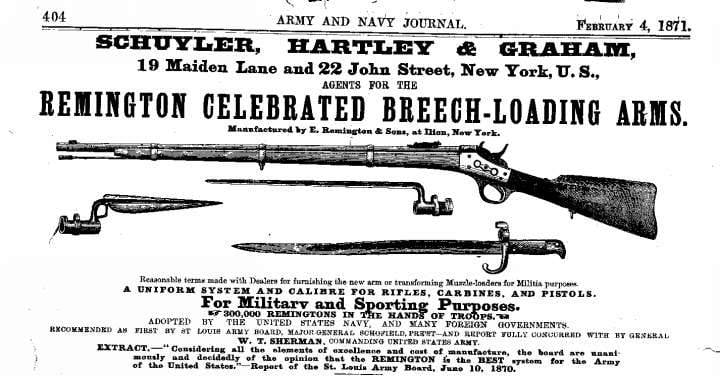 Advertising Remington 1871 of the Year and the assortment of bayonets attached to it.

I first learned about this royal order in the spring of 1966 in a hobby store that belonged to my father. It was in Wallingford, Connecticut. One of my father's buyers was an 86-year-old elderly gentleman who used to work at the Remington factory in Bridgeport, Connecticut, and retired at 1947. Before that, he worked at the factory in Ilio, New York, but somewhere then after World War I he was transferred to Connecticut. He had a clear memory, and he remembered well that it was 50 years ago, when Tsarist Russia actually ordered "several thousand rifle bolts." And ... he had evidence. I should have offered him 100 $ for him before I joined the army in 1969. Now I think I did a disservice to Remington and myself by not making a serious effort to get this document. But at least I could read it several times.

This important piece of evidence was the 16-page newsletter for Remington employees, who were most likely hung on a bulletin board in the meeting room. At the top of the page there were a lot of holes from the clerical buttons, the corners of the pages were bent and there was a date - December 1914. It contained a list of foreign shipments of firearms to the company and their number from 1900 to 1914, as well as thanks to the staff for their work 14 years. It also referred to the recently launched war in Europe. Two pages were completely devoted to the “new era for the old favorite — the new model of the small-caliber Remington rifle.” There was a list of approximately 15 countries that bought a new Remington rotary valve with smokeless powder for cartridges from 1900 to 1914 g. Their number was also indicated, some indicated the model and caliber. There were also references to the near future, that is, the First World War. On one of the pages in bold it was highlighted "The former European Customer can again receive his order in significant quantities." This, of course, meant the French Republic. Russia was among these 15 countries. I clearly remember that in the column under the Russian order it was written “two thousand nine hundred eighty-one, model 1897, special small-caliber rifle caliber 7.62-mm for tsarist Russia after the war with Japan”. This document also mentioned some countries in South and Central America, which made purchases of the M1897 rifle. This newsletter should be considered one of the most valuable parts of the Remington Post, produced by the company for its employees during the late remington period with a butterfly valve. All persistent attempts to locate her whereabouts have not yielded any results. 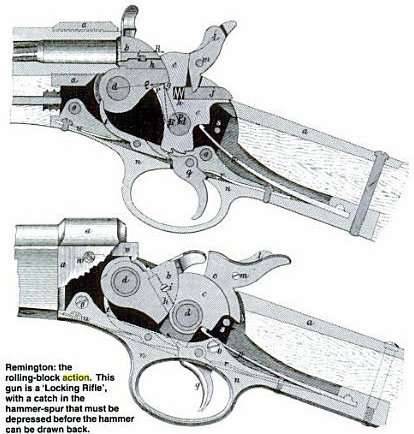 Scheme of the device and operation of the Remington shutter.

Before I found the rifle, which is shown here in the photo, I saw only two of these mysterious Russian rifles with a butterfly valve. I found the first one in Vietnam in 1971 at a dump of weapons seized from the enemy. I was able to look at it and take some notes, but there could be no talk of photographs, even if I had a camera. She had a typical Vietcong, fabric-sewn, home-made rifle belt. The markings on the back of the receiver were erased, but approximately 3 inches in front of the cracked and repaired trigger handle could be pretty clearly disassembled "CAL.7.62R". Something was written in Russian Cyrillic on the sealing gasket of the receiver and on both sides of the body. I clearly remember that in several places was the serial number 428. I had a feeling as if I had found the Grail. In addition to the caliber, I also noted the 2TA barrel and that there was nothing for the ramrod.

The Russo-Japanese War began in February 1904 with a surprise attack by the Japanese on Port Arthur in the Russian Far East. All hostilities took place in China, Manchuria and Korea. At the heart of this conflict were the claims of Russia and Japan on the territory and trade privileges, and it is generally accepted that Japan won a convincing victory.