Ukrainian deputies confirmed the information that Victoria Nuland demanded that Kiev recognize the special status of Donbass and an amnesty for representatives of the DPR and the LPR.

April 27 2016
75
In the Verkhovna Rada discuss the statement of the representative of the US State Department Victoria Nuland, which told the deputy from the party "Self-help". Nuland made a statement during a meeting with representatives of parliamentary factions. From "Self-help" at the meeting with Nuland was attended by another Victoria - Wojcicka. It was she who conveyed the words spoken by Victoria Nuland. More precisely - the requirements.


If you believe the deputy from "Self-help", then Nuland demanded that Kiev fulfill its obligations under the Minsk agreements.

From the statement of Victoria Voitsitskaya, published on the official party site:
The State Department insists that Ukraine should make changes to the Constitution - with a special status for the occupied territories of the Donetsk and Lugansk regions, to hold elections in the occupied territories in the near future and to provide an amnesty for the militants. The Minsk agreements need to be implemented before the end of 2016, there is no alternative to them. Although “Minsk” is bad, Ukraine, as a state, agreed to it. 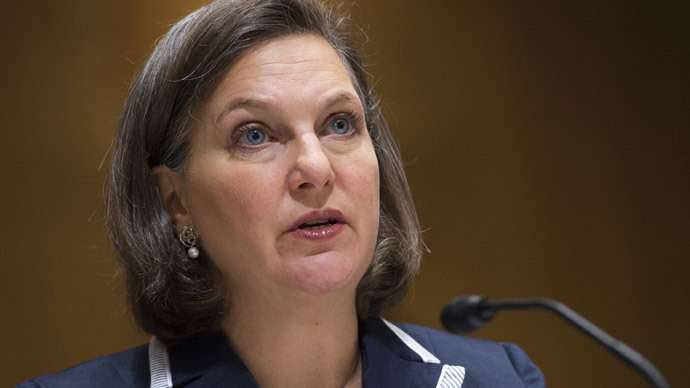 From materials from the site "Self-help":
We are told that if we hold elections, this will set a precedent when for the first time Russian troops stories voluntarily leave the territory they occupied. And there are no guarantees that the Russian troops will come out, and there can not be.

At the same time, it is noted that Nuland, in exchange for fulfilling its obligations, Kiev promised to extend sanctions against Russia before the start of the 2017 of the year - until the new administration appeared in the USA.

Ctrl Enter
Noticed oshЫbku Highlight text and press. Ctrl + Enter
We are
Reports from the militia of New Russia for 27-28 September 2014 of the year
Military Reviewin Yandex News
Military Reviewin Google News
75 comments
Information
Dear reader, to leave comments on the publication, you must sign in.