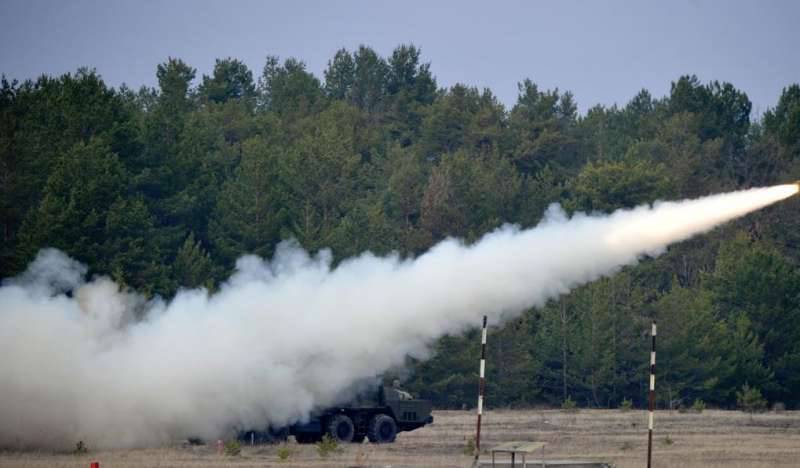 22 April, the press service of the Ukrainian National Security and Defense Council announced the successful testing of a new tactical missile. As the First Deputy Secretary of the National Security and Defense Council Oleg Gladovsky said, a rocket can carry different types of warheads, up to nuclear ones, over a distance of 300 kilometers. Ukrainian media emphasize that the rocket is guided, and it is possible to carry out a full volley during the entire 38 seconds.

Also noted loud statements and the Secretary of the NSDC Turchinov, who oversaw the tests personally. 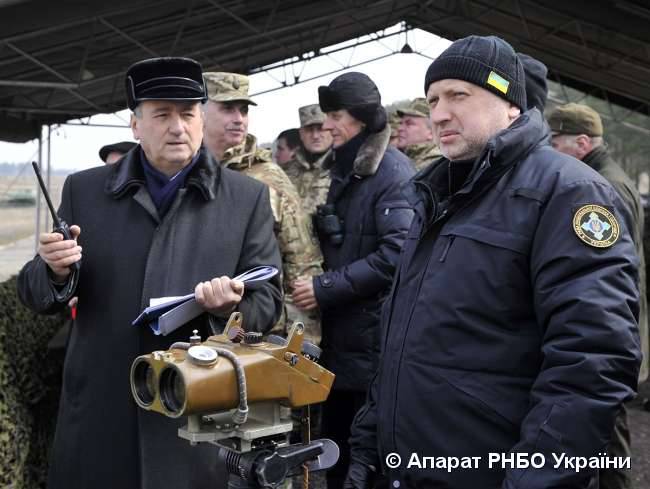 “Before the military-industrial complex, our scientists and designers were given the task of ensuring the production of Ukrainian missiles without at least one component made in the Russian Federation. Oboronprom together with scientists adequately completed the task. Our rocket has completely fulfilled the planned target and hit exactly the intended target. ”

"We are preparing for the use of powerful and effective missiles that will reliably protect our country."

According to Turchinov, Ukrainian scientists and developers are working on several promising developments in this area.

In the authoritative blog BMPD this event was commented like this:

The type and even class for the first time tested 22 of March 2016 of the new Ukrainian-made guided missile is not reported, and high-quality photos and videos with the image of the rocket have not been published. However, taking into account the available information and the fact that the missile launch at a relatively small angle of elevation was made from a self-propelled launcher on the MAZ-543 wheeled chassis, it can be concluded that the first test of the 300-mm “Vilkha” adjustable missile (Olkha ") for use from the Smerch multiple rocket launcher. The Alder rocket is developed by the Yuzhnoye Design Bureau named after them. M.K.Yangelya "(Dnepropetrovsk), the control system (apparently combining inertial guidance with GPS correction) is created by the State Enterprise" Kyiv State Design Bureau "Luch" (http://bmpd.livejournal.com/1802988.html) .

Based on the foregoing, it can be assumed that the test rocket used a standard MLRS Smerch rocket with an installed new control compartment developed by the GKKB Luch.

Can Alder be considered a tactical rocket, as presented by the Ukrainian media?

According to experts, the Ukrainians simply supplied the new control unit with a projectile for the MLRS Smerch. "Tornado" is very difficult to call modern weapons. Still, 1987 year. And, by the way, the fact that Gladkovsky called the number 38 seconds confirms this. The time of the salvo of the "new weapon" strikingly coincides with the data of "Tornado".

Accordingly, we are talking about upgrading the Smerchka CU. And it is quite possible to speak of corrected ammunition, but not of a tactical missile. And similar munitions were in service with the Soviet Army.
Soviet missiles were based on an inertial correction system, which provided angular stabilization of projectiles in the active part of the trajectory, plus range correction due to the correction to the time of separation of the head section. For that time, the system provided good accuracy and accuracy. In modern conditions, this system is supplemented with a correction according to satellite navigation data.

And here begins some of the problems that can somewhat spoil the whole picture.

Ukraine does not have its own satellite constellation, and the situation is unlikely to drastically improve in the coming decades. Yes, the Ukrainian military can use GPS or GLONASS data.

The problem, however, is that the "civilian" versions of the American and Russian systems give quite significant errors in determining the coordinates, and the military ...

I doubt that the United States will provide the Ukrainian military with frequencies of its system. Given the “order” that exists today in the Armed Forces of Ukraine, this would be a very irresponsible act. The same can be said about Russia.

Accordingly, in the absence of satellite accompaniment, the accuracy of the Alder will remain at the level of the 90 of the 20 of the 20th century.

The range is also not impressive. And in the stated number of kilometers in 300, you can even doubt. After all, the increase in the firing range of the same "Smerches" and "Tornado-S" was primarily due to the use of lighter, but effective solid composite fuel. Which, alas, has never been done in Ukraine.

Is it possible to develop and, most importantly, assemble a modern rocket and produce fuel efficiently using our own resources in Ukraine?

With some probability - yes. Still, in the Ukraine from the Soviet time there was a substantial part of such production, but many of the components, units and assemblies were received by Ukrainian rocket-propellers from Russia. Now, of course, these channels are blocked, but Ukraine cannot do anything on its own.

Yuzhnoye Design Bureau had vast experience in the development of missiles. But. These were intercontinental ballistic missiles, the same "Satan". On liquid fuel. Nevertheless, the ICBM is quite different from a tactical missile.

Even if the "Yuzhny" and make the necessary calculations and develop a new rocket, where, say, it will collect? On the "Yuzhmash"? Ok was in stories factory is. But then the following questions arise: who and what? In the media of both Ukrainian and Russian, the topic of the state of Yuzhmash was raised more than once. A state if not bankrupt, then standing one step away from bankruptcy, with hundreds of workers laid off (some of whom are working in Russia today, at similar enterprises), with equipment being sold ... Doubtful.

In addition, let's not forget that the test sample was a prototype. The serial production of “Alder” is only to be set up, and it’s hard to say how long it will take to do this.

It is appropriate to recall the sad history of Thailand, which concluded a supply contract tank "Hold". Since the conclusion of the contract in 2011 to 2016, Thailand received 10 tanks out of 54 ordered. And in the APU these miracle machines are also not observed. At least in dozens.

If the production of the Alder will develop as rapidly as the work with Oplot, then anyone who should have been frightened by the "new" Ukrainian tactical missiles can sleep peacefully. Not in this life.

In the meantime, the naked eye can see that the Kiev junta is trying to saber with arms for campaigning purposes, and not for military-practical purposes. Before practice is still very far.

In addition, we should not forget that at the disposal of Russia, to which all this sabering is directed, there are also the latest EW complexes. And this is an area in which Ukraine is not just lagging behind forever, but it is unlikely to be able to develop at least something that is really capable of withstanding those complexes that are already in service. Although they were developed by 10-15 years ago.

What then to talk about the latest developments such as "Moscow"?

As a result, with the hype and fanfare, the reports on the creation and testing of "miracle weapons" can actually be a simple upgrade of a fairly old, albeit time-tested, weapon. It is difficult to say what the gentlemen from the National Security and Defense Council of Ukraine really hope for. But to rely on these developments today is not so simple. At least, simply because they are hopelessly outdated, and the very likelihood of their mass production is low.

Ctrl Enter
Noticed oshЫbku Highlight text and press. Ctrl + Enter
We are
The action “Military service under the contract is your choice!” In Rostov-on-Don: future contract servicemen, exhibitions and “Russian Knights”Russia demonstrated the most promising weapons at INDO Defense-2014
Military Reviewin Yandex News
Military Reviewin Google News
51 comment
Information
Dear reader, to leave comments on the publication, you must sign in.