Not a day without interference

1 May 2016
21
Electronic warfare is conducted strictly according to science.


Over the past three years, the Armed Forces have made a significant leap in rearmament as well as in combat training. And how was the development of the electronic warfare troops (EW) going during this period? What new types of AMS have come into service, how are they being developed?

Electronic warfare is an advanced field of military science, the most complex intellectual and technical component of the rivalry of states claiming leadership. The rapid development of weapons and military equipment, their saturation with the latest equipment, the creation of global information exchange networks predetermine the impossibility of even the slightest lag in this area from a potential adversary. This sets the highest rate of development of EW troops.

The improvement of their technical basis is carried out in accordance with the LG-2020. The level of funding allows you to fully equip the EW units, units and subunits with functionally complete sets of equipment and maintain an effective weapon system.

Breakthrough technologies, innovative solutions that raise multifunctionality, mobility and maintainability are being successfully introduced. The current weapons system of the EW troops is capable in its area of ​​responsibility to fend off all possible threats to the country's security.

Over the past three years, measures have been taken to improve the structure of the troops. Formed new compounds, military units and units of EW. This happens simultaneously with the re-equipment of modern samples of VVST. Moreover, plans are changing in the light of current threats and emerging priorities. Thus, the Scientific Research Testing Institute of Electronic Warfare was formed as part of the Air Force Academy named after Professor N. Ye. Zhukovsky and Yu. A. Gagarin. In accordance with the directive of the Minister of Defense in October 2015, the Military Scientific Committee of the REB troops was created. As is known, the president of the country made a decision to conduct an experiment on the formation of two research and production (technical) companies within the Armed Forces. One of them was formed and placed on the funds of the Interspecific Center for Training and Combat Use of EW Troops. Research and production tasks related to the production, repair and maintenance of the VVST are successfully performed, as well as work in the interests of defense at the Tambov plant Revolutionary Labor.

Under the state defense order, at present, the 20 order of the nomenclature of modern EW equipment is being supplied. In the near future, the completion of the development and the start of procurement is expected to be no less than in 10 positions. These are virtually all of the EW equipment groups - suppressing radio communications, radiolocation and radio navigation, protection from the WTO, control and support tools. Considerable attention is paid to the development of complexes with unmanned aerial vehicles. 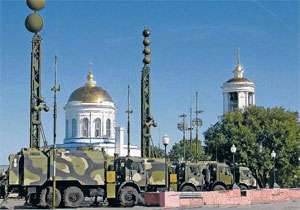 The main requirements for modern EW equipment are as follows:

-expansion of the functionality of individual funds and increase their versatility, the transition to multifunctional complexes that can solve a wide range of tasks to combat the various control systems of the enemy;
-increasing the effectiveness of the struggle with a significant decrease in the weight and size characteristics of the equipment;
-big survivability and mobility due to the placement of the equipment on the media, providing use in conditions of intense fire and electronic countermeasures;
-transfer of efforts to defeat the "enemy territory", the widespread use of unmanned and abandoned (carried) means;
- the creation of a complex radio-electronic situation for the technical means of reconnaissance of the enemy in the areas of combat operations;
-development of multispectral means of jamming in order to protect the AMST from high precision weapons enemy with radio, opto-electronic and combined guidance systems;
-integration of electronic jamming complexes with systems of onboard equipment of aircraft, first of all, radar with the function of creating high-potential interference;
- combining EW complexes into spatially distributed protection systems based on a single functioning algorithm.

According to the state defense order, the troops supplied about 300 of the main types of equipment and more than a thousand small-sized means. This made it possible to re-equip 45 percent of military units and subdivisions into modern complexes “Murmansk-BN”, “Krasukha”, “Borisoglebsk-2” and others.

By the beginning of 2016, the total share of current samples was 46 percent. And in their performance characteristics they are not inferior to the best Western. Moreover, the main trends in the development of domestic EW equipment and foreign analogues coincide, which predetermines the closeness of their characteristics.

The main advantages of domestic technology include:

-longer range of its action, which is achieved by the use of transmitting devices and antenna systems that are superior to those of foreign power and efficiency;
- a wide range of objects on which the impact is carried out;
-the possibility of implementing a flexible management structure as an EW complex, and individual models of equipment that operate autonomously and in the composition of conjugated pairs.

However, no matter how perfect the technique, without sufficient qualifications of each serviceman, it will not be effective. Therefore, in accordance with the requirements of the Supreme Commander and the leadership of the Ministry of Defense, military training has been intensified in this academic year. Particular attention is paid to the practical development of actions on standard equipment and the improvement of the skills of military personnel in the implementation of standards and combat training tasks.

Sudden inspections, interspecies training of troops using standard equipment are important. More than two hundred specialty and command-staff exercises are scheduled for the 2016 school year. Many events are held in an adversarial manner, for example, in the form of a competition for field training among units. Since 2015, representatives of the Armed Forces of Belarus have taken part in it. The initial stages of the competition are held in formations (military units), associations (military districts and branches of the military), where the selection of the best units (crews) for each major specialty is carried out. The ability of the personnel to prepare special equipment for combat use is checked, the best subunit in the compound, association, military district, Armed Forces is determined. In the 2015 school year, more than 100 troops in the 21 crew took part in the final stage of the competition.

From university to the site

The new EW equipment required changes in the training of modern specialists. The training system is built, including the following programs:


In addition, training is being conducted for radio electronic warfare officers when they are appointed to higher positions in higher education institutions of the Ministry of Defense in additional professional education programs.

Not a day without interference

Junior specialists for the NE and coastal units of the Navy study at the Interspecific Training and Combat Use Center for EW. Duration of training - 4,5 month. In the same place under programs of additional professional education and advanced training retraining of military personnel under the contract is adjusted.

its independent and collective application in various conditions of the situation, high moral and psychological qualities.

In addition to educational institutions of the Ministry of Defense of the Russian Federation, EW specialists graduate from the military departments at state educational institutions. Under the Southern Federal University officers are trained. In St. Petersburg State University of Telecommunications. prof. M. A. Bonch-Bruyevich and the Siberian Federal University - officers, soldiers and sergeants.

By 2018, the creation of a specialized ground for electronic warfare troops is planned, which will allow in a short time to prepare subunits and military units of EW, including taking into account the specific operational-tactical situation and the possibility of organizing interaction in the planned virtual field, to perform combat training (special) tasks combat, up to the actions of each serviceman, and also to reduce the material, technical and financial costs through the use of computer-aided learning tools, individual and multiplexing simulators.

Ctrl Enter
Noticed oshЫbku Highlight text and press. Ctrl + Enter
We are
From the history of electronic warfareElectronic intelligence of the Armed Forces of Ukraine
Military Reviewin Yandex News
Military Reviewin Google News
21 comment
Information
Dear reader, to leave comments on the publication, you must sign in.