Russia is increasing its presence at sea

April 30 2016
35
The recently appointed commander-in-chief of the Russian Navy, Admiral Vladimir Korolev, stated that the military composition of the Russian Navy fleet Until 2018, replenished with more than 50 ships. “I would like to emphasize that in three years - from 2013 to 2016 - we added 42 combat ships to the permanent readiness forces. Between 2016 and 2018 we plan to additionally add more than 50 ships to the Navy. This will strengthen the groupings , including interspecific, in almost all strategic areas, "said the commander. 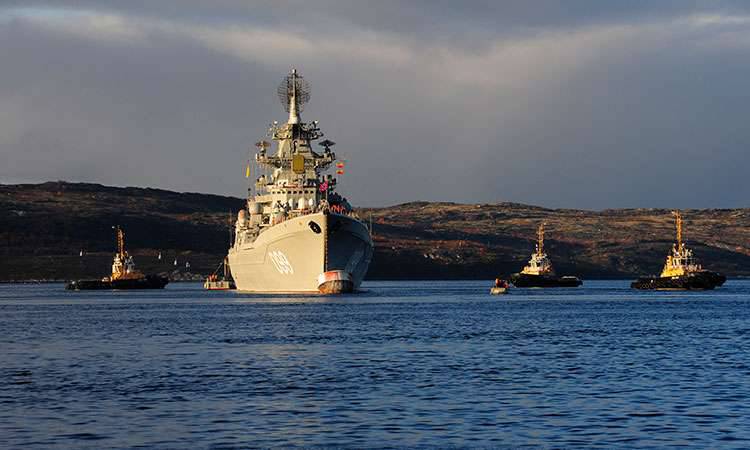 Heavy nuclear missile cruiser "Peter the Great". Photo: Lev Fedoseev / TASS
What directions will cover the Russian fleet? In fact, there are only two countries in the world - Russia and the United States, which are able to ensure their strategic interests in the entire ocean area. However, approaches to ensuring their interests are different. The United States relies on carrier strike groups (AUG), Russia is actively updating the submarine fleet and is adopting new missiles.

As a result of the Second World War, it became clear that from now on, not large artillery ships, but aircraft carriers would play the leading role in the sea. The United States has become the world leader in the number of large aircraft carriers, and this palm is still held. In the Soviet Union, it was decided not to deploy its own program of building aircraft carriers, since it was clear that for ships of this class there are not, or very few, convenient bases from which it would be possible to immediately go into the world's oceans, bypassing the internal seas. To achieve parity with the Americans, it was decided to develop the construction of the submarine fleet. It was an "asymmetric response." The large number of Soviet submarines did not allow NATO anti-submarine forces to track all their movements simultaneously.

Despite some superiority that the fleet of NATO and the United States possessed over the USSR, the ships of the likely enemy felt themselves "under the gun" in all oceans. The global positioning of the USSR fleet was not accidental: the country made it clear that the US fleet is not invulnerable. Today's tasks of the Navy remain the same as during the Cold War - ensuring the security of the state and demonstrating its presence in the same waters as the US Navy. 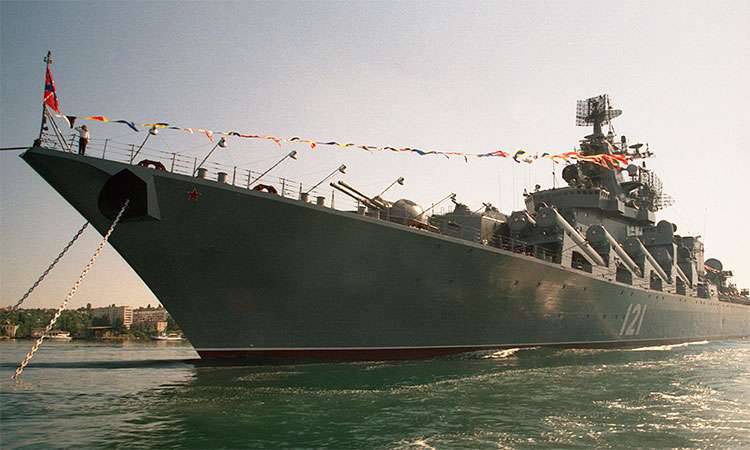 Missile cruiser "Moscow". Photo: Russian Look / Server Amzayev
Judging by the fleet construction program, aircraft carriers in the Russian Navy is not yet a place. Instead, they bet on large surface missile ships. Reequipment by radio-electronic systems is planned on three cruisers of the 1164 project: “Varyag” (flagship of the Pacific Fleet), “Marshal Ustinov” and “Moscow” (flagship of the Black Sea Fleet). The atomic cruiser of the 1144 project "Admiral Nakhimov" is being upgraded and is scheduled to be commissioned by the year of 2018. Another most likely candidate for retrofitting is the Peter the Great cruiser. Today, Peter the Great’s main caliber TAKR are 20 missiles of the Granit complex, the main purpose of which is to combat large surface targets. Stated that the change to "Granite" may come hypersonic rockets "Zircon".

"Zircon" allows you to play a proactive and hit the target much earlier than the means of counteraction are ready. Even if the launch is detected, the preparation of anti-missile systems will take a long time. “A lot” in this case is just a few seconds, which is just not enough. A number of sources in the armed forces reported on the on-site testing of the latest Russian hypersonic missiles, which can be mounted both on surface ships and on submarines. This is a new project of the multi-purpose nuclear submarine "Husky", which is being developed by the St. Petersburg design bureau "Malachite". 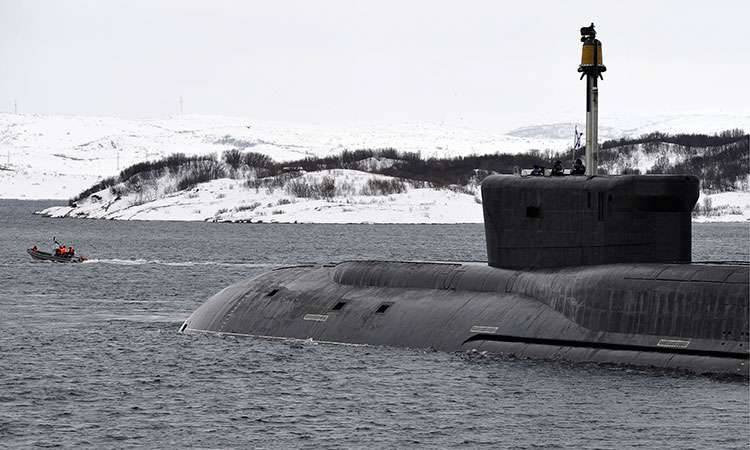 Submarine "Vladimir Monomah". Photo: Lev Fedoseev / TASS
However, surface ships are not the main carriers of nuclear weapons. The underwater component of the nuclear shield’s missiles is represented by the submarines 667BDR Kalmar, 667BDRM Dolphin and Borey 955. Before 2020, it is planned to build eight "Boreev". Three ships have already entered the fleet - the lead ship, Yuri Dolgoruky, became part of the Northern Fleet, the Alexander Nevsky and Vladimir Monomakh set off to serve in the Pacific Fleet.

The submarines of the 885 Yasen project, which are planned to be equipped with torpedoes with a nuclear warhead, must support the actions of the Boreyev. These submarines appear to be the only representatives of the class of "hunters" for the submarine of a potential enemy. 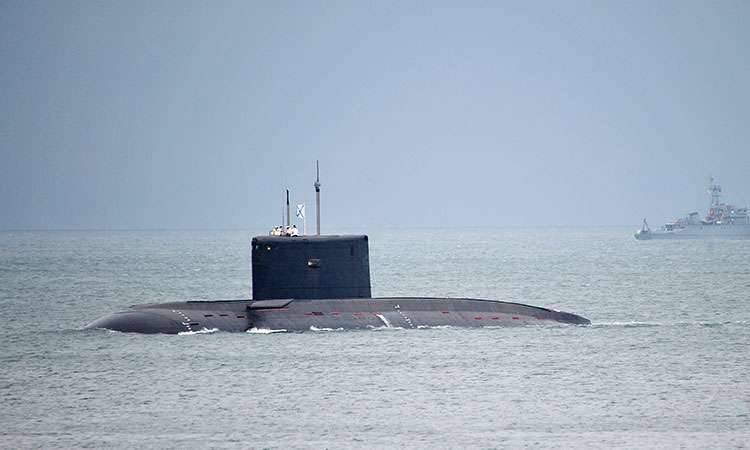 Boat "Varshavyanka". Photo: Yuri Smithyuk / TASS
For action in the inland seas, it is planned to upgrade and strengthen the grouping of non-nuclear submarines. For the Black Sea Fleet, six diesel-electric submarines of the 636.3 Varshavyanka project are currently under construction. The first two submarines have already been transferred to the fleet, the delivery of the third and fourth is planned before the end of this year. New words should be the boat project 677 "Lada", which is supposed to use a promising air-independent power plant. Projects of boats with a similar engine are today in the fleets of European states - France, Germany, the Netherlands. Work is underway in this direction in the United States. Such equipment will significantly improve the fighting qualities of non-nuclear submarines due to the absence of the need for regular ascent to recharge the batteries. At the same time, this will allow the boats to maintain their compact size compared to nuclear submarines and to maintain high stealth rates.

A separate topic was the unsuccessful purchase of French Mistral helicopter carriers, which were transferred to Egypt. According to representatives of the defense ministry, the development of their own helicopter carrier projects has begun. Actually, it’s about the fact that Russia is quite able to do without such global acquisitions of combat surface ships, even when everything was fine with the deal. Obviously, the new helicopter carriers will also go into service with the Black Sea Fleet.