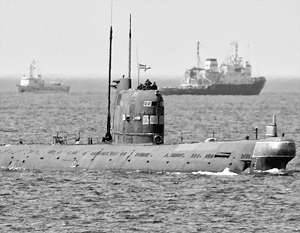 The Minister of Defense of Ukraine finally recognized the obvious: the revival of the underwater fleet countries impossible. Thus, Kiev put an end to the recently announced optimistic plans to acquire submarines and threaten the region from the bottom of the sea. These plans were initially doomed to failure: Ukraine has neither the means nor the personnel to carry out such a serious undertaking.


From the bottom to the ground

Ukrainian Defense Minister Stepan Poltorak said that his country would have to abandon plans for the creation of a submarine fleet. “Today we cannot count on submarines,” he said, answering a relevant question in an interview with the Ukrainian 5 channel.

“Everyone warned that these ridiculous and useless“ Wishlocks ”would end in zilch, which we are seeing now”

Force should be thrown at more real things, he believes - for example, to strengthen the so-called special operations forces. "The acquisition of combat capabilities" for those planned until the end of 2016, added Poltorak.

Poltorak’s statement directly contradicts the words of Vice-Admiral Sergei Haiduk, who until recently held the post of Commander-in-Chief of the Ukrainian Navy. In January, he declared that Ukraine would not only revive the submarine fleet, but also increase it. “Our plans provide for reviving submarine forces as part of two to four submarines before 2020. Submarine forces should become the fleet elite and an important combat, moral, psychological and deterrent factor in the region, ”he said, pointing out possible options for achieving the goal. “These can be ultra-small, small or even medium-sized submarines, including on loan,” he said.

Sergei Haiduk 15 April was dismissed from his post by order of President Petro Poroshenko. On Monday, he appointed Lieutenant-General Igor Voronchenko to take his place. “Taking into account the position of volunteers and the public and taking into account the systemic deficiencies in the performance of official duties, as well as the low authority among the service staff, I decided to dismiss Serhiy Haiduk from the post of commander of the Naval Forces of the Ukrainian Armed Forces,” Poroshenko himself wrote on Facebook explaining the reason for Haiduk’s resignation.

Were there any submarines?

Ukraine lost the submarine fleet in 2014 year - after the referendum in the Crimea, where residents voted to reunite the peninsula with Russia. Then the only submarine that was at the disposal of Ukraine since 1997 of the year was in Russia. Submarine “Zaporozhye”, made under the Soviet project 641, became famous not only because it was Kiev’s only, but also in the Hollywood adventure film “Black Sea”. This boat was hardly suitable for real military operations - it had ceased to meet the requirements of modern naval combat at the beginning of the 1980s, and now it is completely unsafe for the crew.

With regard to the ability of Kiev to revive the submarine fleet, the futility of this idea is not only in the high cost and inappropriateness of such a decision. Another interesting fact is also the lack of space for the submarine fleet. Ukraine can theoretically place it in the ports of Odessa and Illichivsk, but it is unlikely that the necessary infrastructure has been preserved there. “Considering the fact that the submarine base in Balaklava was transformed into a port for business yachts, it can be assumed that the infrastructure for submarine basing in Odessa today is actually lost,” Admiral Viktor Kravchenko, the former commander of the Black Sea Fleet of the Russian Federation, said in a conversation with the newspaper VIEW.
"Wanted" Wishlist "will end with zilch, which we are now seeing"

According to the chairman of the Fleet Support Movement, Captain First Rank Mikhail Nenashev, all the projects and dreams of the Ukrainian authorities speak about the immaturity of the leadership and the failure of Ukraine as a state. “The whole world was ironic about the Ukrainian submarine project. Everyone warned that these ridiculous and useless “Wishlocks” would end in zilch, which we are now seeing, ”Nenashev told the LOOK newspaper.

According to him, Ukraine realized that from the point of view of economic opportunities, lack of training and the lack of such military tasks, the country will not be able to independently carry out such a project. “The West probably said that he would give money only for the payment of interest on IMF loans. And the submarine fleet is always a big financial means and the most complicated system of personnel training. Probably, those who offered to create a submarine fleet of Ukraine "sobered up" a few months ago, "Nenashev believes."

“Ukraine does not need a submarine fleet, it has no prospects. They need several border guard boats to secure economic interests. This is exactly the same fleet as Romania, Bulgaria. In addition to training, for the submarine fleet need an ideology, worldview, which should be brought up among the people. Ukrainian state is only twenty years old. But even if during this time it did not take place, then questions about the very prospects of the Ukrainian state are open. And as for the creation of the fleet, all the specialists, both in Russia and in the West, had only one smirk, ”noted Mikhail Nenashev.

He emphasized that the naval community of Russia is most surprised at how Kiev commanders and military who “at least understand the seriousness of certain projects” are not afraid to be ridiculous and stupid.

"Saakashvili once tried to take Moscow"

In turn, the president of the Ukrainian Center for System Analysis and Forecasting Rostislav Ischenko believes that at one time Haiduk could just as well declare the consciousness of the space fleet.

“It’s clear to any normal person that if submarines fall from somewhere in the sky, you still need at least a trained crew. If you have not had a single submariner over the past 25 years except for those who were listed in the non-floating Zaporizhia boat, this means that you will need about ten years for the appearance of the first trained crew, ”Ischenko told the LOOK to newspaper.
According to him, it is also necessary for the officers to have experience in swimming, so that some of them, as a result of five years, would be able to head the crew of the submarine. “If someone in the past had delirious intentions to create a submarine fleet, then I remind you that the Ukrainian admirals, who were more than ships, were delirious with the creation of the ocean fleet. The missile cruiser "Ukraine" was going to be released into the open spaces of the World Ocean ... Last year, the command of the Ukrainian armed forces declared that they should not take anything from Bryansk, Rostov, and Oryol. And Saakashvili once tried to take Moscow. Who knows what they say. There are entire institutions where Napoleons still live in wards, ”the political scientist sneers.

He asks the question: how much should one not respect oneself in order to produce admiral ranks who by definition could not command with one ship for their entire service?

“And they were made in packs, and many were promoted to the highest admiral ranks. Kuzmuk, the Minister of Defense, was promoted to extraordinary generals under Kuchma even faster than Zhukov under Stalin during the Great Patriotic War. Feel the difference. Zhukov won military campaigns and battles, and General Kuzmuk accomplished only two feats: he hit a rocket at a residential building in Brovary and into a Russian Tu-154 plane over the Black Sea in October 2001. For this he received three promotions and four orders. With this approach to the construction of the armed forces, you can say anything, ”Rostislav Ischenko is sure.