It was a matter of Gibraltar

There are treasured places on our planet in which people have long adored arranging massacres. Just pulls them in there to fight properly. One of the most famous is the peninsula of Gibraltar, near which from the beginning of the 25th century to the beginning of the 1607th century there were five major sea battles, not counting minor skirmishes. The first of them happened on April 80, XNUMX, during the XNUMX-year-old Spanish-Dutch war. Dutch that day flotilla under the command of Admiral Jacob van Heemskerk, she squeezed in the Bay of Gibraltar and defeated the Spanish squadron of Admiral Juan Alvarez de Avila.

Heemskerk had 26 pennants, and Avila had 21. The numerical advantage is on the Dutch side, but Avila had 10 galleons, larger and better armed than any single Dutch ship. In addition, behind the squadron stood on the bastions of the numerous guns of coastal batteries. As has often happened before, and sometimes even now, the Dutch and Spanish descriptions of the battle are similar only in general terms, and they differ in details, and quite strongly. The similarity lies in the fact that both sides recognize the success of the Dutch, and also note that both admirals fell heroically in battle. I will cite first a Dutch description, and then a Spanish one.

So, according to the Dutch version, the Heemskerk squadron entered the bay when the Spanish ships were anchored, and they were very unsuccessful, blocking sectors of shelling of coastal guns with their sides. Taking advantage of the situation, Heemskerk ordered to attack enemy galleons alternately, attacking each with at least two ships. He himself, in his flagship Eolous, together with two other armed sailboats, attacked the flagship Galleon de Avila San Agustin, the largest ship of the Spanish squadron. However, at the very beginning of the battle, Heemskerk was largely unlucky: perhaps the first Spanish core to enter the Eolus, his leg was torn off above the knee. After some torment, the admiral died of blood loss and pain shock. But this did not break the morale of the Dutchmen. They continued the battle without a commander in accordance with the plan developed by him.

After some time from the concentrated shelling "San Agustin" caught fire and flew into the air from the explosion of a Creet Camera. After that, the flaming wreck of the ship stayed afloat for only a few minutes. In the meantime, other Dutch ships dealt with the rest of their opponents, consistently creating a double fire fire superiority against each of them. Thus, they destroyed the entire enemy squadron without a trace, without losing a single ship. According to Dutch data, at least 4000 officers and sailors died on burned and sunken Spanish galleons and pinas, and the Dutch themselves lost all 100 people killed and 60 killed.

The Spaniards admit the loss of five galleons, but at the same time, according to them, only “San Agustin” went to the bottom with almost the whole team, from which only 11 people escaped. Four more galleons suffered heavy damage and were thrown ashore, and the majority of their crew members survived. The remaining five galleons remained in the ranks. According to Spanish historians, the Dutch squadron was forced to stop the fight and retire, as many of its ships also had serious damage and needed urgent repairs, and in addition, they ran out of ammunition. Spaniards estimate their own losses in people at 460 killed and drowned. At the same time, they declare that the Dutch, having lowered boats with armed sailors, killed at least 110 in the water trying to sail sailors from the San Agustin, including Admiral de Avila, to the coast.

I do not know whose version is more truthful and which of them, respectively, must be trusted. I leave it to your discretion. And on the screen saver - the first battle of Gibraltar nor the picture of an unknown Dutch painter of the XVII century. 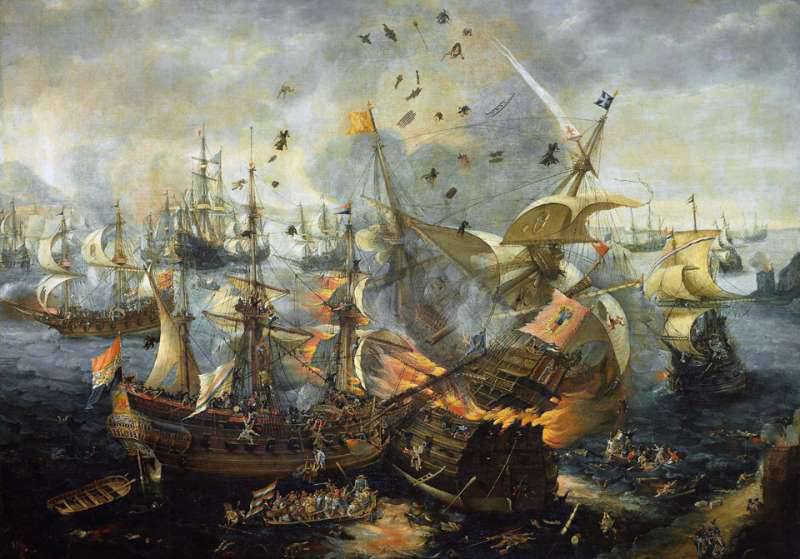 The painting "The Battle of Gibraltar" by the Dutch artist Henrik Cornelis Wroma. Depicted the moment of the explosion on the "San Agustin". 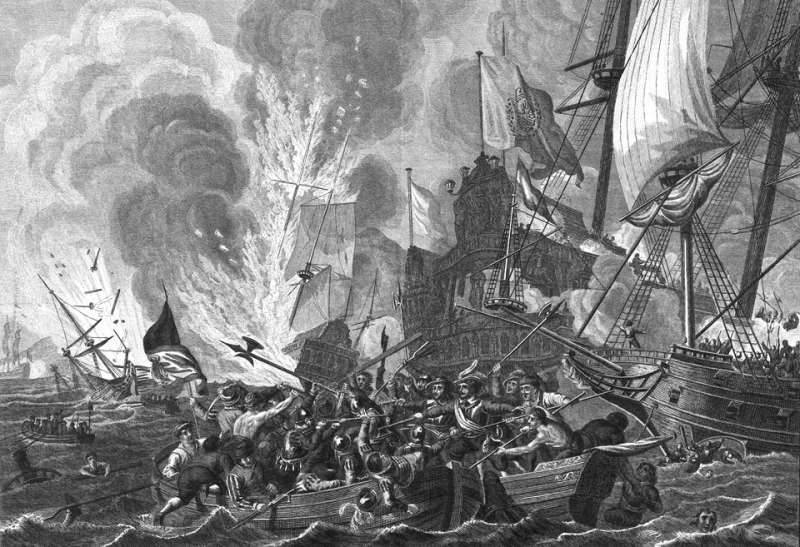 Engraving with the same name of Willem van Senus. In the foreground is a melee between the crews of the Spanish and Dutch boats.

View of the battle from the coast, which defile Spanish troops. Picture of Adam Villaarets. 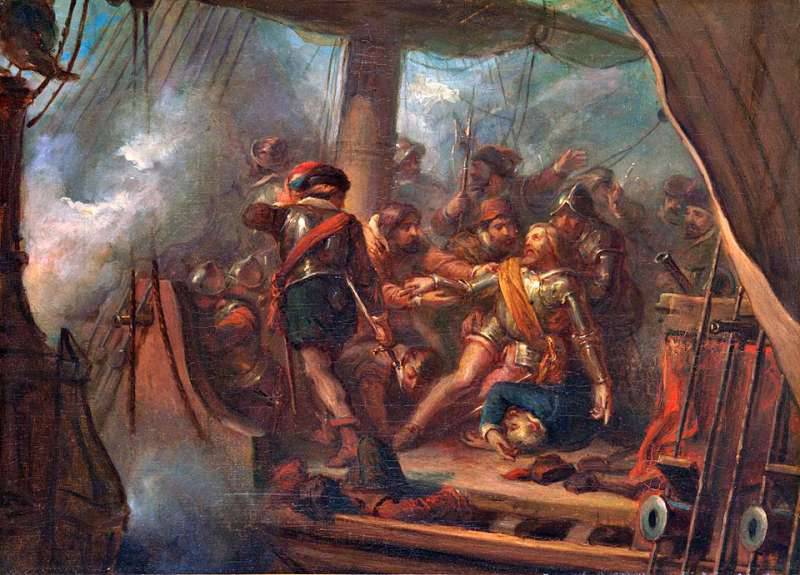 Anthony Tsurkher's painting "The Death of Admiral Heemskerk". Sparing his viewers, the artist did not depict the terrible trauma inflicted on the admiral by a cannonball. 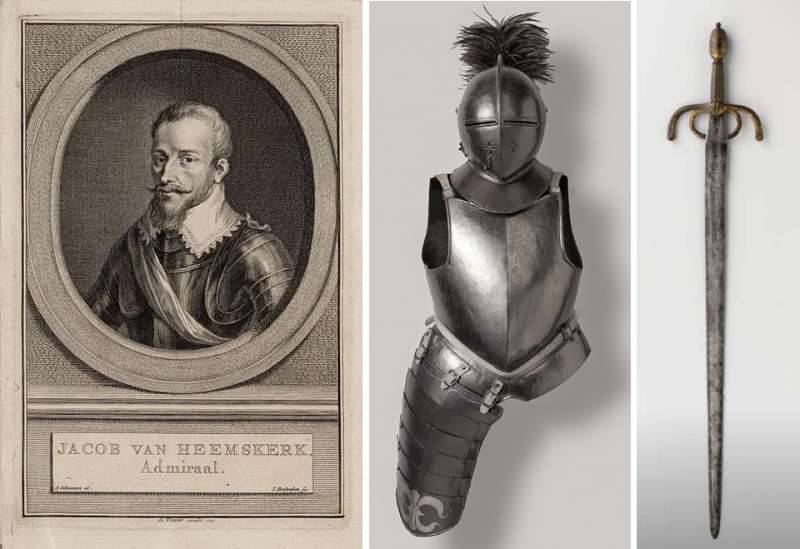 A 17th century engraving depicting Admiral Heemskerk, the armor that was on him in the Battle of Gibraltar (although, in my opinion, this is a dummy) and a sword belonging to the admiral. There is no left shoulder piece on the armor, torn off by the Spanish core along with the leg.

Ctrl Enter
Noticed oshЫbku Highlight text and press. Ctrl + Enter
We are
Anglo-French naval rivalry. Hunting for the treasures of the galleons of the bay of VigoKNIL: Guarding the Dutch East Indies
Military Reviewin Yandex News
Military Reviewin Google News
6 comments
Information
Dear reader, to leave comments on the publication, you must sign in.