The Prosecutor General’s Office notes the growth of crimes of a terrorist nature. Russian citizens fight in the Middle East and train in militant camps 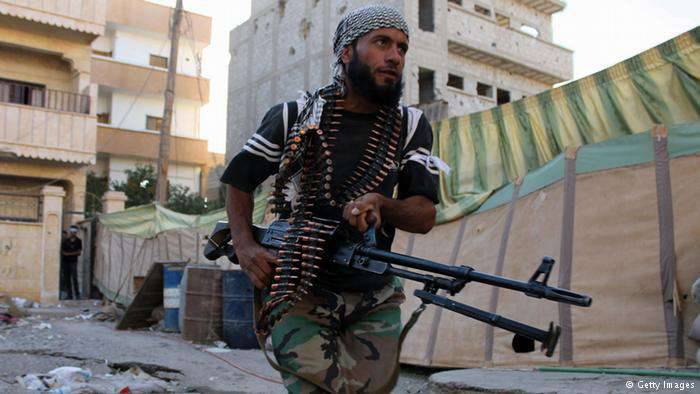 It should be noted here that for many Russian citizens professing radical trends in Islam, leaving for Syria is not associated only with the war. The land of Syria for Muslims is sacred. Many young and not so much people, having perceived the propaganda of foreign emissaries, tend to emigrate to the territory controlled by the IG in order to build their lives in accordance with the ideas about the ideal from their point of view, the righteous structure of society. And we are talking not only about immigrants from the republics of the North Caucasus, but also about ethnic Russians. Widespread fame история with Varvara Karaulova, a student from Moscow, who was detained on the Turkish-Syrian border with a group of citizens who intended to penetrate into Syria. Later Varvara Karaulov was handed over to employees of the Russian special services. As it turned out, Barbara - an educated girl from an intelligent family, who seemed to have a great future in the scientific world, decided to go to Syria, yielding to the entreaties of her lover. And there are not so many such Russian girls. Moreover, the act of Barbara Karaulova, who was just about to get into Syria, is the most innocent in comparison with the activities of other “wives” of supporters of radical fundamentalist views. For example, in January 2016 in Rostov-on-Don, security forces detained three very young girls - 25-year-old Natalia G., 20-year-old Victoria S. and 21-year-old Tatyana K. They were suspected of preparing for terrorist Act on the territory of the city - in one of the major shopping centers. As a result of a search conducted at the girls ’place of residence, explosives and religious literature were discovered, which was sent for examination, in order to determine whether it was extremist. Rostov journalists, who contacted a relative of one of the detained girls, learned that Natalya had taken radical views under the influence of her husband Said. By the way, relatives refused to help the girl at that time - they said that "let him sit and grow wiser."

In the autumn of 2015, criminal cases were instituted against young women who raised funds to finance radical organizations. According to media reports, the group was led by a former student of the Astrakhan Medical Academy, Daria I., who left for Syria with her husband. Three of her comrades - a native of Dagestan, who worked in the market of the city of Makhachkala - directly engaged in raising funds for the needs of a radical organization. Another student of the Astrakhan Medical Academy named Saeed was also charged with financing a terrorist organization.

A serious problem for Russia could be the return of militants who fought in Syria and Iraq to their homes. Officials of the North Caucasus republics have repeatedly voiced how many militants from the region are fighting in the Middle East. So, December 9 2015, the Minister of Internal Affairs of the Republic of Dagestan, Abdurashid Magomedov, said that according to the Interior Ministry, in Syria, about 900 natives of Dagestan are fighting. According to the minister, all men fighting in Syria are on the federal wanted list. By the way, it is interesting that many of them left for Syria with their families - their wives and children. That is, it is obvious that they hoped to settle in the territories occupied by the radicals for a long time. According to the media, about 500 people went to Syria from Chechnya, 50 of whom were returned home. Criminal proceedings were initiated against 311 immigrants from the republic who are in Syria. 6 April 2016 Deputy Minister of the Interior of Kabardino-Balkaria Kazbek Tatuev reported that according to the republican Interior Ministry, more than 130 women from the CBD, including 28 women, are in the ranks of radical organizations in Syria. Since the outbreak of the armed conflict in Syria, twenty residents of Kabardino-Balkaria have died there. There are in Syria and people from other republics of the North Caucasus and Volga regions.

The most dangerous is the appearance of cells of the forbidden IG in the North Caucasus. It is known that part of the North Caucasian underground swore allegiance to the IG, on whose behalf even a number of terrorist acts were committed in the republics of the North Caucasus, primarily in the southern regions of Dagestan. The danger of transferring to the Russian land the experience of participating in hostilities in Syria was emphasized in one of his speeches by President Vladimir Putin. However, federal and republican law enforcement agencies are taking active steps to counter the activities of radical organizations in the territory of the Russian Federation. Back in mid-December, 2015, director of the Federal Security Service of the Russian Federation, Alexander Bortnikov, stated that during the years 20 from 26 leaders of radical groups operating in the North Caucasus and swearing allegiance to the IG were killed. At the same time, many active militants have left the territory of Russia and other post-Soviet republics and are currently in Syria and Iraq, beyond the reach of Russian law enforcement agencies.

Some immigrants from Russia and the former Soviet republics made a great career in the ranks of radical organizations in Syria. An active role in the activities of radical organizations in Syria, and not only the IG, but also Dzhebhat an-Nusra, is played by immigrants from Georgia, more precisely, from the Pankisi gorge, a compact place of residence for Georgian Chechens - Kistinians. From May 2013, the military leadership of the IG units was carried out by one Abu Umar ash-Shishani. The real name of the native of the Pankisi Gorge is Tarkhan Batirashvili. For some time he served in the armed forces of Georgia, from where he quit for health reasons. Over the past three years, the world's media have repeatedly (at least twelve times) reported on the alleged death of Abu Umar al-Shishani. 15 March 2016 of the death of Shishani was officially announced by the representative of the Pentagon, however, the IG was quick to refute the words of a senior American official. 21 March on the death of Shishani reported one of the Iraqi TV channels. But this information remained unverified.

International extremist organizations orient themselves, first of all, towards young people, positioning themselves as a new promising religious and social project capable of "changing life for the better." Against the background of disappointment in the socio-political and economic situation in their own republics and regions, many young people are becoming greedy for radical ideas and readily accept them. The field of propagandists of radical organizations becomes the Internet, first of all - social networks. On the expanses of the "world wide web" emissaries of foreign extremist structures and recruit new supporters - from those who are willing to help the radicals with money to the direct perpetrators of terrorist acts.

In April, an anti-terrorism meeting was held in Rostov-on-Don, in which it was reported, in particular, that 2016 had blocked thousands of accounts on the Internet lately, propaganda of extremist views and terrorist activities was carried out. Russian law enforcers are actively taking up the monitoring of social networks precisely because there are many pages and communities that promote radical views and communicate their followers. At the same time, social networks facilitate not only the work of propagandists of radical organizations, but also the work of the special services. After all, accounts are quickly established, they allow to track the approximate circle of persons involved in extremist activities. Many supporters of extremist organizations come to the attention of law enforcement agencies precisely because of their active presence in social networks.
Most often, supporters of radical organizations penetrate into Syria through Turkey. It is Turkey that in recent years has become the main transit for supporters of the Islamic State and other banned organizations, and the Turkish authorities, who formally declare their desire to fight terrorism, in fact do not pose real obstacles to the penetration of militants into Syria. Of course, sometimes in order to maintain a positive image of the country, groups of supporters of radical organizations on the Turkish-Syrian border can linger, but against the backdrop of thousands of people penetrating Turkey to Syria, dozens of detentions look far from convincing. In addition to Turkey, another “transit” of radicals to Syria is Saudi Arabia, since it is to this country that millions of people from all over the globe come to pilgrimage. Lost among them groups of radicals worth nothing. In order to prevent citizens of the Russian Federation from going to the Middle East and other regions of the world to join radical and terrorist organizations, in March 2016 was Deputy Head of the Main Directorate for Countering Extremism of the Ministry of Internal Affairs of the Russian Federation Vladimir Makarov announced an interesting proposal - to ban those suspected of involvement in extremist activities travel outside the Russian Federation. Also, the Ministry of Internal Affairs of the Russian Federation proposes to draw up a list of countries, the departure to which will require certain justifications from Russian citizens traveling there. First of all, we are talking about the countries of the Middle East, Turkey, some states of South Asia and Africa.

As for the citizens of the Russian Federation returning to their homeland after participating in the Syrian conflict on the side of radical organizations, they are subject to criminal prosecution. Throughout 2015-2016. in most regions of southern Russia, trials were conducted in cases of citizens who fought in Syria on the side of banned organizations. In the autumn of 2015, the Prosecutor General Yuri Chaika announced 650 criminal cases initiated in connection with the revealed facts of the participation of Russian citizens in the ranks of illegal armed groups participating in hostilities in Syria and Iraq. However, as practice shows, the majority of participants in such formations are sentenced by the courts to short terms of imprisonment - usually in the region of two to three years, with a sentence being served in a penal colony. But at the same time, one should not hope that the tendency of Russians to leave for Syria to take part in hostilities on the side of extremist organizations can be defeated only by toughening criminal responsibility and strengthening control of the special services and law enforcement agencies. Extremism is a social problem in the first place. The presence in the republics of the North Caucasus, and in Russia as a whole, numerous unsolved social problems pushes young and not-so-young people into the arms of the radicals. Emissaries of extremist organizations find an attentive audience among young people who are offended by life and have not found themselves in their own republics or regions.

Ctrl Enter
Noticed oshЫbku Highlight text and press. Ctrl + Enter
We are
Situational analysis of the death of the MH17 flight (Malaysian Boeing 777), made on the basis of engineering analysis from 15.08.2014Memo to mercenaries in Africa
Military Reviewin Yandex News
Military Reviewin Google News
25 comments
Information
Dear reader, to leave comments on the publication, you must sign in.