April 27 2016
157
Recently, the Federal Service for Supervision in the Sphere of Communications, Information Technologies and Mass Communications (Roskomnadzor) has published a list of media outlets with Russian jurisdiction that receive funding from foreign sources. The official name of the list: “Notice of receipt by the editors of the media, broadcaster or publisher of funds from foreign sources” (ibid full list).


The publication of this kind of data is a new practice. Previously, the media worked in the Russian Federation, without providing data to the controlling agency about the sources of their funding. However, in 2015, a decision was made that changed the situation. Thus, the media receiving funds from abroad, Roskomnadzor ordered to disclose information of this kind. This was done as a kind of analogy (for the media environment) to the legislative norm on non-profit organizations and foreign agents. The point is that all non-profit organizations engaged in political activities to one degree or another, in Russia, the law obliged to designate its status as a non-profit NGO.

As in the case of NPOs, not all Russian mass media have such a legal norm provoked a calm response. And what only after such an innovation did Roskomnadzor not hear in its address! .. First of all from the "non-living" media.

Apparently, the cause of the unrest on the part of individual media platforms is related to the fact that their management team tried in every way to hide from readers (viewers, listeners) the fact that the media is fed from the hands of representatives of foreign countries. And if it feeds, then, therefore, in many respects it reflects (protects) the interests of the investor. After all, it is naive to believe that if a newspaper, magazine, television channel, radio station or Internet portal is financed, for example, by a Western foundation, then the media reader (viewer, listener) will find something that sheds light on the real problems of such financing. Although these real tasks sometimes reveal themselves too actively ... Simply, the management team of individual media is too eager to master foreign funding, obviously, hoping that the flows (or at least the streams) of foreign funds will not run out in the future.

Responsibility for a single refusal to provide information to Roskomnadzor about the availability of foreign funding from the media entails liability in the form of a fine in the amount of 30 to 50 thousand rubles. For large media, the means, to put it mildly, are not the largest, and must be significantly lower than the volume of foreign funding. Repeated refusal to provide information on the availability of foreign funding from the media leads to the possibility of revoking the certificate of registration by the Federal Service for Supervision in the Field of Communications, Information Technologies and Mass Communications.

Russian legislation requires the media to report once a quarter on the availability of foreign funding. The concept of foreign funding does not fall under the receipt of funds for the publication of advertising, if the amount does not exceed 15 thousand rubles.

It is worth recalling here that, since January 2017, an amended rule has been introduced in relation to the Russian media, limiting the share of foreign shareholders to 20%. In addition, since 2017, the founders of the media in Russia will not be able to become both foreign citizens and individuals with dual citizenship. 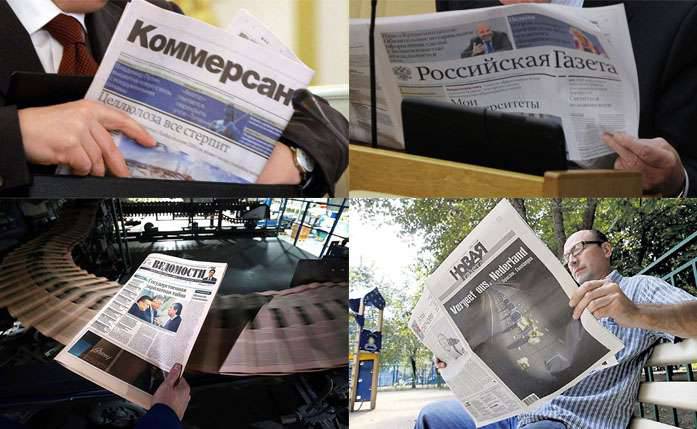 If we talk about the media, which are associated with the publication of political and (and) economic news materials or analytics on the same topics, then a fresh list of media receiving foreign funding is as follows:

There is an unexpected representative of this list. Quite unexpected ... It turned out that foreign funding for information activities is received and "Russian newspaper". The very combination of the words "Rossiyskaya Gazeta" (FGBU "The Editors of the Rossiyskaya Gazeta") receives foreign funding ", looks like an oxymoron. But it really does ... And hardly from Astana or Minsk ... And if with the mentioned Snob or “Granyami.ru”, as they say, everything is clear, here’s the RG’s foreign funding raises certain questions. One of them: why did you need foreign funding for the mass media, which is the official publication of the Russian government? Or a ruler RF GUSTs does not consider it necessary to adequately finance its organ? ..

Information about the volume of foreign financing and the “investors” donor of the mentioned Russian mass media Roskomnadzor, as it happens, is not published yet. And it seems that other people's money is not accepted, but ... It seems that for many Russians, it would still be useful to know what kind of a foreign country (foreign company) and how much it invests in a certain Russian mass media. At least for citizens to understand how much interest objective data and Russian interests are actually reflected in such media.

Ctrl Enter
Noticed oshЫbku Highlight text and press. Ctrl + Enter
We are
Results of the week. "We will build this, that from Mars they will look and be surprised!"Political NGOs with American and British funding in St. Petersburg
Military Reviewin Yandex News
Military Reviewin Google News
157 comments
Information
Dear reader, to leave comments on the publication, you must sign in.