Plans and reality of the submarine fleet 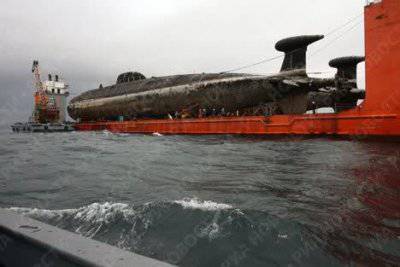 In the coming years, as you know, about 20 trillion rubles will be spent on defense needs. Part of this money will go to needs fleet. And, apparently, a considerable part. For example, the president of the United Shipbuilding Corporation R. Trotsenko recently boasted that PO Sevmash (Severodvinsk) already has orders until 2022. One cannot but agree with him that such ambitious terms are rarely met in industry: the total value of all contracts of the enterprise is 280 billion rubles. Interestingly, this is the largest volume of agreements concluded with a legal entity in our country. A worthy cause for pride.


The bulk of the orders of the Severodvinsk plant is related to the construction of submarines of the fourth generation of projects 885 "Ash" and 955 "Borey". At the moment, the plans of the Ministry of Defense include the construction of ten boats of the first type and eight of the second. Recall the number of necessary "Ash" is constantly changing - it took three dozen, then only five ships, but in the spring of this year, it was decided to stay at ten. Although it cannot be argued that after the commissioning of these ten submarines, construction of new ones will not begin. Some optimism in terms of the feasibility of the planned construction is given by the fact that in recent 7-10 years the pace of construction of the head ships of both projects has increased significantly: Severodvinsk (885 Ave.) was laid back in 1993 year, and Yuri Dolgoruky (Ave. 955) in 96. Sometimes it is said that the duration of construction is caused by the use of radically new materials and technologies. However, this version does not contradict the opinion that for the time being, the “embryos” of the boats were gathering dust on the stocks due to the lack of normal funding. Nevertheless, in recent years, money has been found, and at the moment already three new submarines (Severodvinsk and two Boreas: Yuri Dolgoruky and Alexander Nevsky) are being tested. Two more ships were laid and are under construction (Kazan "of the 885 project and Vladimir Monomakh of the 955 project).

Our submarines of the near future have a number of problems. Previously, they were mainly associated with money, and now - with a variety of equipment. The most well-known and “advertised" snag of the Borey project at the moment is the Bulava R-30 rocket. Although the last five test launches of this missile at the moment were successful, there was no less skepticism about it, as well as various jokes. In addition, the media are pouring fuel on public opinion: after the launch of the 16 in August of this year, it was reported that it should have been held a week earlier, but it was transferred due to problems with the boat. Representatives of the Ministry of Defense, in turn, soon denied the information on the launch transfer. So a series of problem-free tests can be considered continued. With the torpedo armament "Boreev" special problems have not yet arisen, in any case, if they were, then did not cause a wide public resonance.

In the same way, the arming of the Yasen boats did not attract the attention of the people. And this is understandable: their main weapons are the anti-ship missiles "Onyx" and "Caliber" of various versions and modifications. To date, both families of missiles tested, brought and built serially. And, as you know, success is not as attractive as failures.

What happens: money and not only

Another problem with the new submarines is constantly “moving out” terms. For example, when the construction of Severodvinsk received an impetus in the form of normal financing, it was planned to introduce the boat into the fleet in 2011. However, for several reasons, this solemn event was moved to the second half of the 12. Sevmash claims that the Boreas, in turn, will have to wait until the Bulava is ready for adoption and mass production. Hopefully, the next dozen submarines will be launched, tested and put into operation in accordance with the plans. 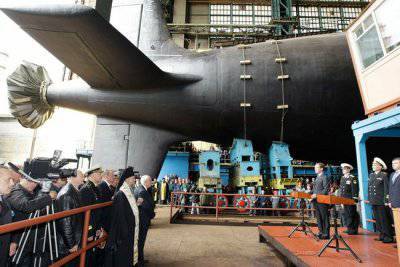 This year, as a submarine from under the ice, two similar storiesrelated to the production of boats and financial flows. In April, one Tykhanov was sentenced to a fine due to the fact that his company, under a contract with Sevmash from 2009, led to welding, did not have the appropriate license. Under the article on illegal business, Tihanov was fined thousands of rubles for 30. In turn, his company received about two million for the work done. 8 December became aware of a similar case. The details have not yet been announced, it is only known that a certain company, under the guidance of a certain woman from 2007 to 2009, spent a year of installation work on 12 millions. What will end - we'll see.

In a similar context, the change of leadership of Sevmash is sometimes mentioned. Recall that in June the general director of the company, N. Kalistratov, wrote a statement “of his own will” and went to work in the legislative bodies of Arkhangelsk. A. Dyachkov, the now head of the Rubin Central Design Bureau, was appointed to the post of general director of the PO Sevmash. In the near-fleet environment, of course, there is a version about the reasons for the resignation of Kalistratov, connected with his specific activity as CEO, on the sly. However, the USC claims that this is only a kind of optimization of the work of the “daughter” in order to improve its work. In addition, in the spring, Deputy Prime Minister S. Ivanov expressed doubts about the advisability of finding Kalistratov as director of Sevmash.

Perhaps it is precisely such stories with obscure offices without licenses that became the main reason that the Ministry of Defense was in every possible way trading with shipbuilders about the cost of contracts. In any case, one can understand the Ministry: if all sorts of small “Sharashkin offices” “graze” around a large manufacturing plant, you can expect anything. From increasing the value of contracts to the disastrous consequences for the plant. For example, Saratovsky has already perished in a similar way. aviation the plant: at one time a lot of subsidiaries appeared around it, and financial flows in them were distributed in such a way that all the profits went to them, and all the costs and debts went to the plant itself. It is unlikely that anyone in our country wants a similar fate for Sevmash or any other defense enterprise.

It would be desirable that in the future there would be no problems with financing or signing contracts due to price disagreements. If everything is really the case, then another question will become topical: where will 18 new boats go? Boreas, as carriers of strategic missiles, may be included in 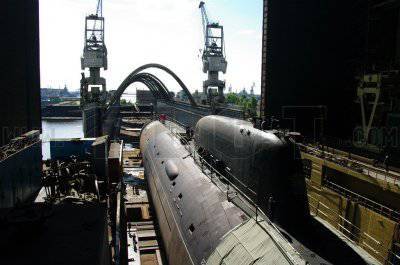 The composition of any of the Russian fleets. The situation is the same with the “Ash”, although in the light of recent developments in the field of missile defense systems such boats may be more necessary in the Northern Fleet. If the United States continues to develop its missile defense, namely its part, based on ships with the Aegis system, then over time we can expect the appearance of such ships in the waters of the Arctic Ocean. As is well known, it is most expedient to “conduct” intercontinental missiles through this region. Accordingly, in the future, a certain number of anti-ship missile submarines may be needed to counter the US missile defense system. The maximum range of launching of Onyx or Caliber missiles reaches 300 kilometers, respectively, if necessary, it will be necessary to fire from the water area covered by ice. Only submarines can effectively solve such problems.

True, I must say, the exact plans for the distribution of new boats have not yet been published. There is even an opinion that they do not yet exist at all. It is unlikely that the Ministry of Defense will order the equipment without having plans to use it, but there is an opinion and this fact must be reconciled. Although no one forbids him to challenge. Where exactly the boats will go to serve, and whose version will prove to be correct - let's find out in a few years, the year for 17-18, when a sufficient number of boats of the 885 and 955 projects will not only be launched, but also completed the tests.