April 27 2016
113
Some Western analysts believe that today it is impossible to talk about a real cold war that was going on between the USSR and the USA in the 20th century. Now between Washington and Moscow, in essence, there is no ideological confrontation. Communism on the planet is no more. However, in Russia, of course, there is no even the right capitalism - some spoiled version of it is practiced there. And neither Russia nor the United States throws a direct challenge to each other in 2016 year. True, they lead proxy wars in which they compete. 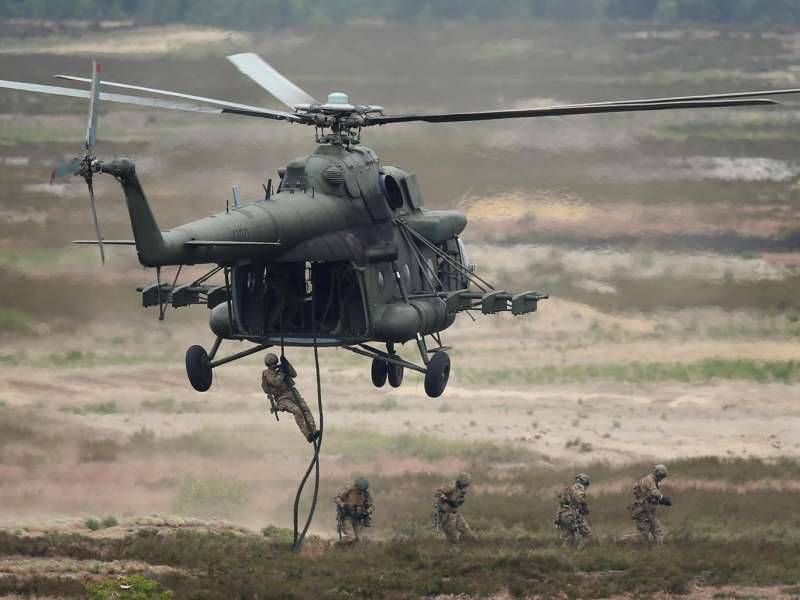 Soldiers of the Polish army are parachuted from a Mi-8b helicopter. Military exercises of the joint operational group of high alert forces of NATO

Rupert Cornwell (Rupert Cornwell) in the British newspaper «The Independent» shared his thoughts on mediated wars (aka proxy wars, proxy wars), the “cold confrontation” of the Russian Federation and the United States, and the “flawed” version of capitalism in Russia.

As the author thinks, today it is hardly possible to say that peace is in the midst of a new cold war. Accurate analogies can not be. Unlike the post-war decades, there is currently no ideological conflict between opponents. Communism has "practically disappeared" on the planet, and Russia "is practicing its own flawed version of capitalism."

Judge for yourself: America is not able to understand why the Russians consider Ukraine to be their “part”, which should remain “within their sphere of influence.” America does not understand why the Russians justify their “seizure of the Crimea” and also “provoked” the conflict in the east of Ukraine, which plunged the whole country into a crisis. Washington has never been able to understand on what grounds a few years ago the Russians objected to Georgia - “another former Soviet republic that sought to reorient itself to the West.”

In turn, Russia feels its eternal insecurity and is experiencing a “quite reasonable desire to protect its western borders.” At the same time, this natural desire of the West is perceived by the West as “provocative and unnecessary aggression”.

It seems to the author that the NATO states are not at all the “reincarnation of the Third Reich”, which intended to “secretly deploy” its troops in the old Soviet regions of Eastern Europe as a springboard for the occupation of Russia.

Other elements of the former Cold War also clearly need to be clarified, the Briton believes. Not wanting to give each other a direct challenge, the West and Russia are “fighting in proxy wars,” the most obvious of which is the war in Syria.

Russia is building up its armed forces, especially submarines (in this area they have long maintained the advantage of the United States and the NATO states). Other problems of the Cold War came to life: control of the sea canals in the region of Greenland, Iceland and Great Britain (GUIK in the terminology of NATO). Soviet submarines were to pass in these places in order to reach the North Atlantic.

And here is another fact, similar to the events of the old cold war. All the last time continuing "provocations".

For Russia, the very presence of NATO close to its borders is a provocation, and “not without reason,” the author believes. In the end, even during the Cold War, the borders of the countries of the alliance were hundreds of miles from Russia: the Soviet Union had a geographical barrier in the form of East Germany, Poland, Belarus and the Baltic Soviet republics. Today, Poland, Estonia, Latvia and Lithuania belong to the North Atlantic Alliance. As a result, NATO is "at the very threshold of Russia."

Russia also creates "provocations" - the most "brazen" is the flight of the Russian 13 aircraft of April over the US destroyer Donald Cook in international waters in the Baltic Sea ("within 30 feet" from the ship). Washington responded by saying that the Russians were “rude” unprofessional.

In his speech last week in the US Senate, General Curtis Scaparrotti (his appointment to the post of supreme commander-in-chief of the combined NATO forces in Europe was approved at the end of March, this general will replace Philip Breedlove. - O. Ch.) not only "pushing" NATO, but even "destroy" the alliance.

Currently, the US has deployed several combat brigades in Eastern Europe, and Washington has increased its European military budget by 4 billion. But Scaparrotti is not enough: he wants to deploy a brigade there (5000 man) not on a rotational basis, but on an ongoing basis. “To guarantee an American response” in the case of “direct aggression from Russia”.

With regard to incidents similar to the incident with "Donald Cook," the general is confident that the Russians should be taught by their own methods.

Finally, nuclear weapon. Rupert Cornwell thinks that his use is in the very last place (“the bottom line”) for any possible “confrontation between Russia and the United States.” The author hopes that "the 2.0 cold war will not turn into a hot one."

He also doubts that Moscow will go "on the attack." True, with the current tensions, any provocation, any retaliatory strike, any damage to the ship, or the shooting down of an airplane can lead to "unpredictable consequences."

In his opinion, Russia today really resembles a double-headed eagle: on the one hand, the deplorable situation in the economy and the social sphere, on the other - a strategic and diplomatic revival.

According to the analyst, Vladimir Putin has built power on three pillars: 1) restoring the authority of the state; 2) the revision of the world order formed after the Cold War; 3) economic recovery. But what did Putin come to?

The first item collapses under the burden of corruption, and the third - under the influence of the hardest economic crisis. And now the Russian paradox: in Russia “the state draws strength from the sufferings of its citizens,” the author is sure. And at the same time, the economic "nightmare" is accompanied by a "diplomatic and strategic revival." Here it is, point two: for a couple of years, Russia “destroyed the European order that emerged after the Cold War, showed impressive strength, intervening in the events in Syria and then in Nagorno-Karabakh, returned to the forefront on the diplomatic scene, smoothing the consequences of its expulsion community after the annexation of the Crimea and the dismemberment of Ukraine "lists Bavre.

Russia was able to demonstrate military power, including the ability to wage hybrid wars, it modernized its armed forces and increased its military budget. The strategic intervention in Syria turned out to be more effective than the actions of the Western coalition.

According to the observer, it was Moscow that “revived the situation of the Cold War”. Politically, Putin was saved by the Syrian Assad regime. The Russians confused the Europeans with their air and naval operations near the EU borders. Russian diplomacy has become a necessary power in Europe and the Middle East.

Nevertheless, the author considers the “breakthrough” of Putin to be “short-lived”: the state, devouring its own economy, society and citizens, is doomed to decay. Nevertheless, Putin reminded by his actions that the policy of domination and strength is effective even in the 21st century, the journalist points out.

So, according to some Western observers, Russia is no longer communist, but not capitalist in the true sense: the Russians, led by Putin, are practicing a “flawed” version of capitalism. In any case, there is no longer any ideological confrontation between communism and capitalism on the planet. And nevertheless, the Cold War is being waged, if not in the old forms.

Analysts say that militant American generals and politicians are ready to strengthen the US military power in Europe, and not on a rotational basis, but on a permanent basis. Apparently, this is due to their awareness of the major strategic successes of the Russians in “proxy wars” and international diplomacy, where the West has made a blunder.

But analysts do not expect direct confrontation between Russia and the West. And the more so they do not expect a nuclear war. They are waiting for another: Putin’s “breakthrough” will be “short-lived”. The Kremlin "devours" the country's economy and society, and therefore the Russian state is "doomed to collapse."

Observed and commented on Oleg Chuvakin
- especially for topwar.ru
Ctrl Enter
Noticed oshЫbku Highlight text and press. Ctrl + Enter
We are
Persons of the present Russia: about those who left their blood forever in the Syrian landBetween the sea and the land. US Marine Corps strategy on the verge of change
Military Reviewin Yandex News
Military Reviewin Google News
113 comments
Information
Dear reader, to leave comments on the publication, you must sign in.