Catastrophic mistakes of the USSR government in foreign policy

April 30 2016
98
In economic construction, Leonid Brezhnev did not make serious mistakes, but at the same time in foreign policy, he repeated the same mistakes that all leaders of the Soviet state, who came to power after the death of Joseph Stalin, made it to him. 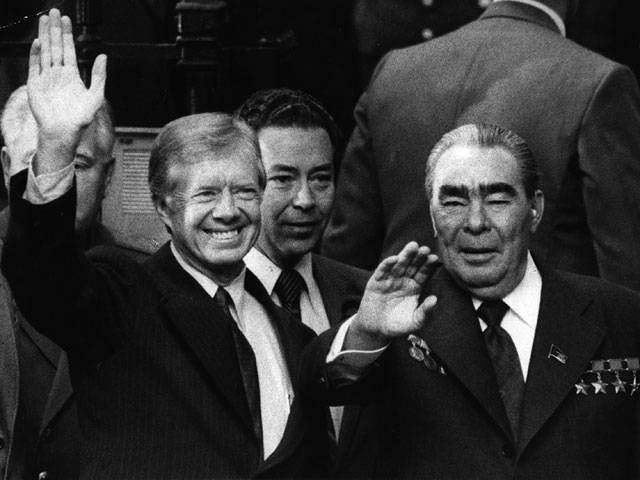 Leonid Brezhnev believed in the possibility of friendship with the West and sought to establish good-neighborly relations with Western countries. He did not understand that Western countries, firstly, in their policies do not apply such a thing as friendship, and, secondly, that in the West Russia has never had true friends for all its existence even among the Slavic peoples. except courageous Orthodox Serbs. And it would be possible to justify Brezhnev’s foreign policy, if we were weak, but during his rule of the USSR he was as powerful as the West. In international politics, Leonid Brezhnev made serious mistakes and thereby inflicted his Brezhnev blow on the USSR.

Cooperation with the countries of Eastern Europe was developed through the Council for Mutual Economic Assistance (CMEA). In 1971, the CMEA adopted a twenty-year program of cooperation and development. Trade turnover with the CMEA countries amounted to 50% of the total trade turnover of the USSR. The Druzhba oil pipeline and the Soyuz gas pipeline were built, and the Mir energy system was created. Many Soviet people wore clothes and shoes made and manufactured in the CMEA countries. Even the production of helicopters with gas turbine engines "Mi-2" was transferred to the CMEA country - Poland. Not assembly, namely the entire production. Production of the An-2 aircraft was also transferred.

The USSR placed in the CMEA countries orders for the production of civilian ships and other products of heavy industry, seeking to create and maintain a high level of industrial development in Eastern European countries. Czechoslovakia supplied a huge number of remarkable Java motorcycles to the USSR. Such actions of the Soviet Union fastened the CMEA countries together, and in the absence of Western intervention in the internal affairs of the countries of Eastern Europe, the USSR could live with them in friendship and harmony for decades.

In relations with Western countries, the USSR made completely unjustified concessions. 1 July 1968 of the USSR signed an agreement on nuclear non-proliferation weapons with England, and then with the United States and other countries. The treaty is signed by 100 countries. Some promised not to distribute weapons, others not to accept them and not to produce them. The nuclear powers - France and China, as well as countries such as Pakistan, Israel, South Africa, and India - have not signed the treaty. The USSR did not need this treaty. The treaty was needed by the United States, who feared that countries with nuclear weapons would come out of the dictates of America.

Earlier, in March 1966, France withdrew from NATO and its President Charles de Gaulle was received in the Kremlin with Russian cordiality. A. N. Kosygin made a return visit to France. With President J.Pompidou of France replacing de Gaulle in 1971, L.I. Brezhnev signed a cooperation agreement.
In reality, the USSR’s friendship with France did not provide either political or economic benefits. But France, by demarche of withdrawal from NATO and an agreement with the USSR, strengthened its status as an independent country compared to other Western European countries, which fully complied with the will of the United States. I think that Brezhnev did not even understand with whom he was dealing.

Project de Gaulle, France was Europe from Brest to the Urals. This project will then be picked up by the traitors of the national interests of Russia Gorbachev and Shevardnadze. But if we look at the project more deeply, then it does not belong to the three named political figures.

The project “Europe from Brest to the Urals” is a project of A. Hitler and for its implementation in 1941 the USSR crossed the 5,5 million armed soldiers to the teeth of soldiers and officers of Germany, Hungary, Romania, Italy and Finland! For the sake of this project, they fought a war with our country to exterminate the peoples of the Soviet Union. Hitler spoke and wrote about this repeatedly and openly, and L. I. Brezhnev rejoiced at his diplomatic successes.

But, in my opinion, the USSR-Germany non-aggression treaty signed by 12 on August 1970 in Moscow caused the greatest damage to the USSR. This treaty was only the beginning of the signing of documents officially allowing Western countries to interfere in the internal affairs of the Soviet Union. And in itself, he did not give the USSR any benefits, since the FRG was very, very much weaker than the USSR, and the treaty only untied Bonn’s hands and bound the USSR.

West thought of everything. The USSR could not fail to sign a treaty in which the FRG officially recognizes the post-war borders in Europe, does not lay claim to the Kaliningrad region, and recognizes the border along the Oder-Neisse. The Federal Republic of Germany recognized the post-war Polish borders, that is, the Poles ’ownership of the land, which the Red Army seized from the Red Army in Germany and was transferred to Poland by the USSR government, despite objections from the United States, Britain and France.

It must be said that Poland does not remember the independence granted to it by the Soviet Republic after the revolutions of 1917, or the transfer of land to it by the Soviet Union in 1945. Poland prefers to hate us, as the Western world hates us. Germany removed the claims of Germany on these lands. Historically they really belonged to Poland. West Germany went further and 21 in November 1972 of the year recognized the GDR, and in 1973, the Federal Republic of Germany and Czechoslovakia denounced the Munich agreement.

These treaties were no doubt initiated by West German Chancellor Willy Brandt, who could not take a step without the permission of the United States. But the United States thought everything over and were firmly convinced that the USSR would sign an agreement with any reservations to confirm the inviolability of the postwar borders. So it happened.

The next step in giving the treaties the format of international law was the Conference on Security and Cooperation in Europe. The meeting will later grow into the Organization for Cooperation and Security in Europe (OSBE).

It was here that the United States and Canada joined the negotiation process with a “humanitarian package”. The meeting took place from 1973 to 1975 years, first in Helsinki, then in Geneva and then again in Helsinki. The final act of the meeting was signed on 1 August 1975 by the heads of 33 European states, as well as the USA and Canada. The signatory countries established and approved the most important principles of international law, including behavior in the European and world arena.

In addition to peaceful assurances, the principles of non-use of force, respect for sovereignty, there was also a “Respect for human rights and fundamental freedoms” clause. This item, under the guise of protecting human rights, gave the United States the right to interfere in the internal affairs of any country. Such intervention was later called “humanitarian intervention.”

In the 21st century, the United States added the fight against terrorism to the primacy of the overvalued “human rights”, finally unleashing its hands on the path to world domination or, as they say now, to globalization.

Signed on 1 on August 1975, the above act dealt another blow to the USSR. The Americans proclaimed democratization and human rights as the main goals of US foreign policy and they covered their aggressive intentions and actions. They were complemented by the previously proclaimed goals of US foreign policy - national security and trade. The act was interpreted as the right of peoples to self-determination.

This strike, of course, was much weaker than an enemy strike with a lie about mass Stalinist repressions, but along with a lie about our agriculture, 1930, military and post-war times destroyed the Soviet Union, like many different bombs, shells, mines, grenades and bullets destroyed the beautiful cities and villages of the USSR during the Great Patriotic War 1941-1945 the Nazis. The Americans continued the work of the Hitler hordes defeated by the Red Army, but in a different way.

In some cities of the Soviet Union, very homogeneous “Helsinki groups” were formed, which allegedly monitored the fulfillment of Helsinki commitments. These groups transmitted their observations abroad, and there they printed and replicated information on alleged human rights violations in the USSR through all media channels.

They were approached by representatives of the 5 column, whom the Soviet government, in accordance with the laws of the country, began to prosecute for committing unlawful acts. They were approached by Jews who did not receive permission to emigrate, Crimean Tatars who wanted to give the Crimea to the Turks, Meskhetian Turks, Catholics, Baptists, Pentecostals, Adventists and other people opposed to the USSR.

Thus, the internal enemies of Russia received international legal status to fight with our country. And the document giving legitimacy to the destroyers of the USSR was signed by the head of the Soviet Union. This is what political myopia leads to. The ingenious politician J. V. Stalin would not allow this to happen. Yes, we had the strength, and the Brezhnev leadership skillfully developed the country, but there was not enough political far-sightedness.

The members of the CPSU Central Committee A. N. Shelepin and P. E. Shelest understood what the United States was leading and expressed their opinions. But certain political circles influenced L. I. Brezhnev, and in 1976, both of the indicated opponents of the pro-American course were withdrawn from the Central Committee of the CPSU.

In addition, documents were signed on Soviet-American cooperation in commerce, science, education, space exploration. No wonder R. Nixon flew to Moscow and became a "friend" of the USSR. He flew in the 1974 year, and L. I. Brezhnev flew to America. In 1974, L. I. Brezhnev met in Vladivostok with the new US President D. Ford. An agreement was reached on concluding a new strategic arms limitation treaty (SALT-2).

Thus, in three years the American presidents arrived in the USSR three times. Only this fact should have alerted the leadership of the Soviet Union. But no, I did not alert.

The members of our government should have been aware of the statements of Nixon, who said that the main interest of the United States was to do what the USSR would most harm. The Soviet government and L. L. Brezhnev personally were not warned about Nixon’s intentions. The responsibility for this lies with the chairman of the USSR State Security Committee (KGB), Yu. V. Andropov.

The Soviet leadership could study and understand the intentions of the West, first of all, through the KGB services, but they were inactive and thus did not protect the interests of their homeland, did not interfere with the reduction of its security. Our members of the government did not know and did not understand much and, therefore, again signed treaties detrimental to the Soviet Union.

And it was clear that the leaders of the United States flew to the USSR from the fear of day by day by the growing might of the USSR. It was necessary to immediately contain the growth of military power of our country, because the United States lagged far behind us in the quantity and quality of strategic weapons.

America lacked a scientific and technical level in the nuclear-missile areas, and it was losing the arms race in creating the most complex and decisive outcome of the war of strategic weapons. In the field of strategic weapons, it could fall behind forever and thus lose the cold war. In fact, she was already losing her.

That's why President Nixon measured his pride, boarded a plane and flew to Moscow. The SALT-1 agreement, signed by the Soviet side, America limited the number of missiles with nuclear warheads to 1300 units. For us, the first treaty meant curtailing the production of strategic missiles, and for America, the opportunity to catch up with us.