April 27 2016
23
The first domestic project of a ballistic anti-ship missile (ASM) P-27K for the D-5 complex was completed with mixed results. The technical tasks were successfully resolved, but the missile was not adopted for strategic reasons: the deployment of such weapons could hit the naval component of the strategic nuclear forces. However, interest in ballistic RCC at one time led to the emergence of a new similar project. Since the early seventies, when the P-27K rocket has already been tested, the design of the D-13 complex with the P-33 rocket was in development.


At the very end of 1970, the P-27K rocket was put to the test. A few months later, it was decided to develop new weapons of this kind based on a system with higher characteristics. In June 1971 of the year by a resolution of the Council of Ministers of the USSR to the special design bureau No. 385 (now the State Rocket Center) headed by V.P. Makeev was instructed to develop a new missile system for submarines equipped with an anti-ship missile. The entire project received the symbol D-13, the rocket was called P-33.

In accordance with the technical specifications, a new type of rocket should have been based on the design of the P-29 product, have similar dimensions and weight, and also make extensive use of existing components and assemblies. It was necessary to equip the rocket with a homing system capable of searching for targets and ensuring their defeat with high accuracy. The flight distance was set at the level of 2000 km, for hitting targets one should use a monoblock or split head.

The proposal to develop a new ballistic anti-ship missile, in the first place, was associated with the need to increase the firing range. Thus, the P-27K product was based on the construction of a single-stage medium-range missile P-27 (up to 2500 km) and could attack targets at a distance of up to 900 km. The P-29 rocket, in turn, belonged to the intercontinental class and could fly 7800 km. Thus, it was possible to significantly increase the range of standardized RCC.

Already in the early stages of the P-27K project, by the mid-sixties, general features of the appearance of ballistic missiles designed to attack mobile surface targets were formed. With some changes, these developments were proposed for use in creating the new P-33 rocket. At the same time, it was necessary to refine them and change them in accordance with new opportunities and technologies. All this, in theory, allowed to solve the set design problem.

The product Р-33 was proposed to be built according to a two-step scheme. In this case, the first stage was to be based on the corresponding aggregate of the intercontinental rocket P-29 and ensure initial acceleration with subsequent output to the ballistic trajectory. The homing system, the warhead, its own engine for maneuvering and a set of other equipment were to be located in the second stage casing.

It was proposed to equip the second stage with a combined control system based on several guidance systems. On the active part of the flight, providing the correct trajectory outside the atmosphere, the rocket had to use an inertial guidance system. After entering the atmosphere, passively active radar homing head should have been activated. Its task, depending on the mode of operation, was to search for signals emitted by the target ship, or to search for a target using radar. According to the data obtained from the homing head, the second stage was to correct the trajectory of its flight and hit the selected object.

The requirements for the unification of the D-13 complex and the P-33 rocket with the D-9 and P-29 systems primarily concerned rocket dimensions and launchers, which made it possible to dispense with significant changes in the design of the submarine carriers. The length of the base missile P-29 was 13 m, the maximum diameter was 1,8 m. The launch weight was 33,3 t. The dimensions and weight of the anti-ship P-33 should have been at the level of the base intercontinental missile.

In addition, it was required to unify the two products on the power plant. Both stages of the R-29 rocket were equipped with liquid engines of various types. The first stage used the product 4Д75, the second - 4Д76. Both engines worked on the fuel pair heptyl and nitrogen tetroxide.

Increased requirements for the firing range led to the need to use appropriate targeting systems. By the early seventies, the navy of the Soviet Union already had a search system for ship connections of a potential enemy in the oceans. Initially, reconnaissance aircraft were used to solve such problems, later special space vehicles took over duty. The development of intelligence systems continued. To issue target designation to the D-13 missile system, it was proposed to use both existing and prospective search and detection systems.

The first version of the P-33 project implied the use of approximately the same solutions as in the case of the P-27K, but with the amendment to a different basic design. So, as the first step for the P-33, the corresponding P-29 unit was considered, modified accordingly. The second stage was to be developed from scratch, but using existing designs from the previous project.

Preliminary work on the project allowed to form the overall look of a promising ballistic RCC. At the same time, a number of extremely difficult design problems were identified, without which the successful completion of the project was impossible. First of all, there were problems with the dimensions of the second stage. Equipping this product with the required warhead and the necessary control systems led to an unacceptably large increase in size. The second stage with the required design characteristics occupied almost half of the total length of the rocket. Because of this, it was necessary to reduce the first stage and reduce its fuel supply. Calculations have shown that this version of the P-33 rocket will not be able to fly the required 2000 km. The estimated range reached only 1200 km - about two-thirds of the required value.

Particular problems arose during the elaboration of the structure of the second stage enclosure. The use of a radar homing head required to equip the rocket with a radio-transparent head fairing. The latter, however, had to withstand the harsh conditions that arise during high-speed passage through the dense layers of the atmosphere. Required mechanical strength and resistance to high temperature impacts. Making a fairing with all the necessary properties was an extremely difficult task. Due to the lack of the required materials, in particular, at one time it was decided to abandon the use of the guidance system in the final flight segment of the P-27K missile.

The work of the radar systems was also associated with another problem identified during the research. With the high-speed movement of the second stage in the atmosphere, the surrounding air had to warm up to the state of plasma. The ionized high-temperature gas surrounding the head fairing could seriously impede the operation of the radar seeker or even make it impossible. To solve this problem, additional research from relevant scientific organizations was required.

In 1974, SKB-385 specialists prepared an advance design of the new rocket complex. With the help of some technical solutions, it was possible to significantly improve the basic characteristics in comparison with the first version of the rocket. So, the firing range has now reached 1600-1800 km - on the order of 80-90% of the required. Due to a different design of the second stage, it was possible to slightly increase the supply of fuel in the tanks of the first stage and thereby improve the range performance by several hundred kilometers. However, the rocket still did not meet the requirements of the customer.

At the same time there were no less serious problems. In the mid-seventies, there were simply no materials and technologies suitable for solving the problem of creating the head fairing of the required structure. Also required to continue work on the study of the plasma formed during movement in the atmosphere. Such studies could further delay the development of the rocket, since they took an unacceptably long time. At the same time, calculations showed that a successful solution to the problem of the fairing could adversely affect the overall characteristics of the rocket. There was a real risk of making the required fairing, but at the same time reducing the flight distance by about a third.

The developed rocket Р-33 in its dimensions and weight corresponded to the basic product. Its length did not exceed 13 m, the diameter of the hull was 1,8 m. Starting weight at different stages of development varied within 26-35 t. Due to maximum unification with P-29, the new ballistic anti-ship missile system could be used with the corresponding 667B submarine mine launchers. At the same time, it was necessary to equip the submarines with some additional equipment intended for obtaining target designation and entering data into the rocket electronics.

The preliminary project of 1974 was planned to be submitted to naval experts for consideration next year. fleet. In the case of a positive conclusion, SKB-385 should continue the design work, according to the results of which preparation for the tests could start. In accordance with the preliminary work schedule, joint flight tests of the D-13 complex with the R-33 missile on a carrier submarine could begin in 1980. 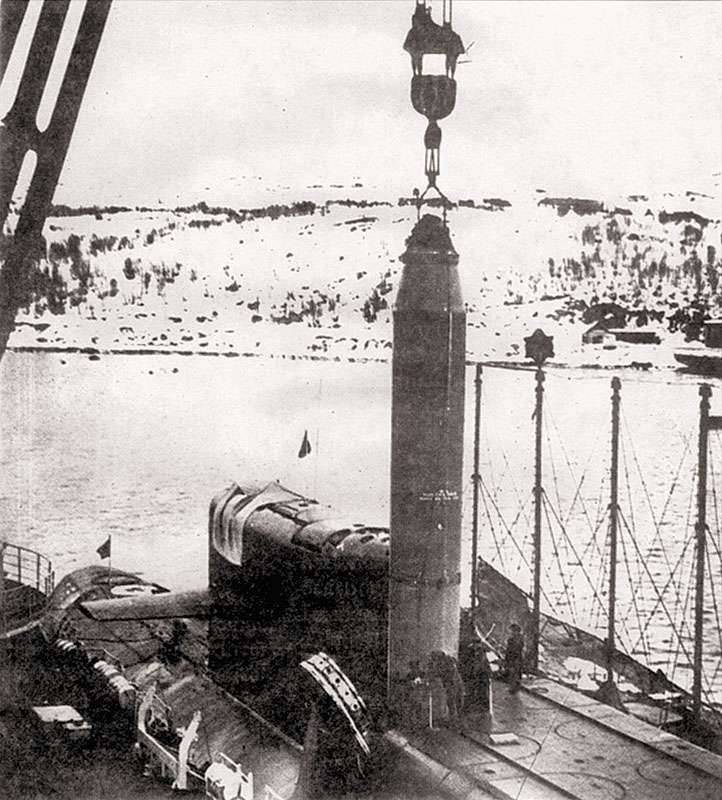 Loading missile R-29 in the launch shaft of the submarine project 667B. Similarly, it was proposed to upload and P-33

In 1975, the specialists of the Institute of Armaments of the Soviet Navy reviewed the draft missile system presented. After completion of the analysis, a decision was made on the future of the promising project. Moreover, at that time, representatives of the fleet determined the prospects for two ballistic RCC projects at once. In accordance with the recommendation of the fleet, 2 of September 1975, the USSR Council of Ministers decided to stop work on the P-27K rocket. The resolution to continue the work on the D-13 system with the P-33 rocket did not come out. Its development also stopped.

Two promising projects were closed for several reasons. Thus, the accuracy of targeting left much to be desired, which could adversely affect the effectiveness of attacks. In addition, the proposal to use a nuclear warhead imposed serious restrictions on the deployment and use of anti-ship missiles. In terms of new international agreements like weapon did not differ from ballistic missiles used in the interests of strategic nuclear forces.

The deployment of the P-27K and P-33 missiles was also considered inexpedient due to the limited ability to build submarines. Due to unification with other types of missile systems, such weapons could be used by submarines of existing and promising projects. However, the launch of the P-27K and P-33 anti-ship missiles could hit the number of deployed P-27 and P-29. This adversely affected the strategic security of the country and therefore could not receive the approval of the command.

In the autumn of 1975, the development of two anti-ship ballistic missile projects was discontinued. The already tested P-27K rocket and the P-33 being developed only did not fully suit the customer, not only for technical reasons, but also for reasons of strategy. The P-27K missile was the first and last Russian ballistic RCC to be tested, and the P-33 remained in stories as the last representative of his class, which has come down to full development.

According to some data, it was further proposed to create an anti-ship missile based on the intercontinental SD-100, but such a project did not advance further than a preliminary review. Due to the presence of a mass of characteristic and fundamentally fatal deficiencies of one character or another, it was decided to abandon the further development of anti-ship ballistic missiles. It was now proposed to use only systems based on cruise missiles for attacking surface ships of the enemy - there were already great successes in this area.