April 26 2016
130
On the eve of Vladimir Putin during the forum of the All-Russian Popular Front in Mordovia made fun of the journalistic profession. One of the participants of the forum was going to ask a question to the President of Russia, and he asked about her occupation.


“Journalist,” she replied, adding: “And she was a teacher.”

Vladimir Putin with a laugh in his voice:
Have you been a teacher? Did you become a journalist? What a fall ...

After a pause:
Just kidding...

It would seem that all journalistic brethren, including our entire creative team - the “Military Review” team, should bear a grudge against the president. Like, what does he allow himself - insults journalists, you know, even though he says that it was a joke ... Here are just a journalistic profession, and I think that colleagues from other media will not argue with that foam on the corners of the mouth, there is some kind of strange transformation. And this transformation is often far from positive. And only with journalism? ..

Some give reports about the “air condition explosion” and how “they set fire to themselves in Odessa”, others publish interviews about the “crucified boy”. Still others write about the "Altai armored police", the fourth about the "fireproof business card Yarosh." However, against the background of some wonderful materials, even the report “about the explosion of the air conditioner” may seem like flowers.

As a truly enchanting example of modern “journalism”, material from 21 of April of this year is found, published on the Internet site of a large information resource of RBC. Not just an information resource, but a whole media holding, which is customarily referred to among reputable economists and analysts. - Media holding, which includes more than a thousand professional journalists, editors, proofreaders, etc.

It's about the material that caused a serious discussion in the blogosphere. Moreover, the discussion was caused not so much by the material itself, as much as the form in which it was published online initially.

So, more about the work done by specialists of RBC from 21 April. Speech about article “Privatization under threat: why the authorities are not in a hurry with the sale of assets”such people as Maksim Tovkailo, Ekaterina Metelitsa, Lyudmila Podedova, Timofey Dzyadko, have applied their hands and talents to work on which.

It would seem, quite an ordinary article for RBC, in which once again it would seem to make it clear that privatization (and the widest) of state assets should be a panacea for the Russian economy. The article cites the words of the President of the Russian Federation Vladimir Putin, who said that if privatization of state assets was carried out, then it was necessary to allow firms with Russian jurisdiction and try to circumvent all sorts of gray schemes and offshore companies that would not allow the state treasury to receive the planned profit, and the entire economy - planned effect. It is this position of Vladimir Putin in the material of RBC that seems to be the main criticism. They say that you are giving “free” privatization - so that they can apply (and they even don’t want to put) a hand to everyone who is not lazy, including foreigners (apparently, such as William Browder or George Soros ...)

However, in this form the article was not submitted immediately. Initially, an article was published on RBC on the Internet in which the editor in the middle of the article asks the authors to “insert the comment of some manager and head of the analytical department,” who will criticize Putin’s proposal. The readers of the material quickly got their bearings and managed to keep the version of the RBC material, in which it was actually proposed to conduct a mini-interview in the way that the editorial staff benefits. The initial version is link. 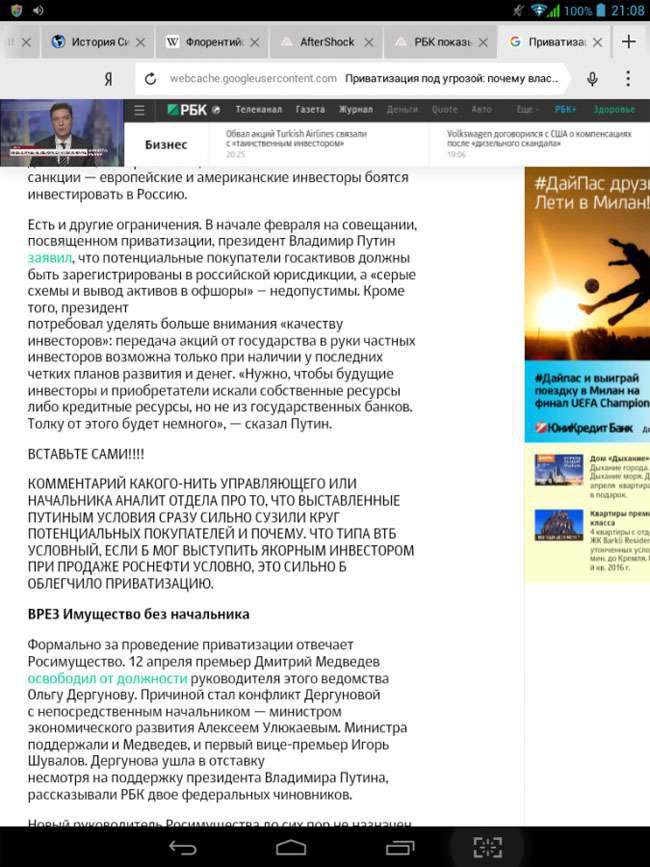 On the cached version (in Google) of the published material RBC blogger writes under the nickname vredina999 in LiveJournal. Link here.

After Vladimir Putin’s quotation, the editor’s entry appears in the RBC material, which eloquently testifies, to put it mildly, to the specific working method of the media holding. Here is the record (all typed with Caps Lock):

INSERT YOURSELF !!!
COMMENT ON ANY MANAGER OR CHIEF OF ANALYT DEPARTMENT WHEN THE PUTINOUS CONDITIONS OF THE POTENTIAL CUSTOMER HAVE BEEN REDUCED AND WHY. WHAT A TYPE OF VTB CONDITIONAL IF IF I CAN EXPOSE AN ANCHOR INVESTOR WHEN SALE ROSNEFT CONDITIONALLY, THIS IS STRONGLY EASIER PRIVATIZED.

The whole piquancy of the situation is not so much in the fact that this editorial comment was published, but in what its essence is. It turns out that RBC selects experts to comment on the material, describing in advance what they should say. And does he talk with these experts at all? That is, there is no talk of any “live” expert opinion. What we need, let them say ...

The funniest thing (if it’s a laughing matter at all) is that in place of this editorial comment really appeared an expert judgment necessary for RBC. And as if represented by the chief economist of PF Capital, Yevgeny Nadorshin. From RBC material:
As can be seen from the example of the privatization of RAO UES assets and the sale of Yukos assets, the need to participate in transactions of companies with Russian jurisdiction costs the creation of structures like “Baikalfinansgrupp”, reminds the chief economist of PF Capital Yevgeny Nadorshin. According to him, the sanctions not only limit the ability of Russian companies to attract financing in Western markets, but also drastically reduce the circle of Western investors interested in investing in Russian assets.

He said what RBC needed ...

And in order not to be limited to the “independent judgment” of one expert, RBC decided to add the opinion of the second. But whether something went wrong with creativity, or the expert really decided to “not glow”. In general, judge for yourself:

Since the sanctions, American and European investors have lost interest in Russian assets, even highly liquid and heavily depreciating, another financial advisor agrees, asking for anonymity.

Who do you agree with? With those who first explained to the expert, what opinion should he present? And how much can you find the same "anonymous consultants" who do not agree. Why not bring their version?

But it was said: “INSERT YOURSELF!”, And they inserted it ...

In general, in the language of modern youth: burned! ..

And after this you don’t know: if the media writes about something, presenting an “expert judgment”, then is this an expert judgment or something from the series “insert yourself” according to the RBC method?

As an option: a specialist on anonymity basis agreed that we don’t need such journalism ...