US foreign military bases in the images of Google Earth. Part 2 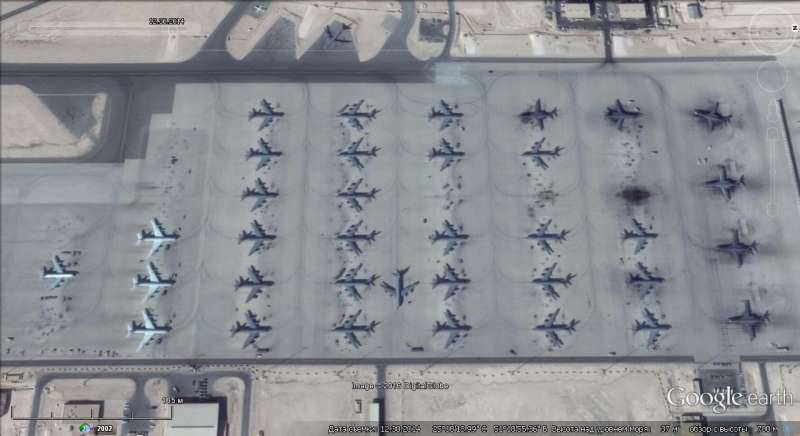 The United States is very close to the Middle East region. In this area there are a number of military bases and defense facilities with large military contingents deployed on them.

In the UAE, 32 km south of Abu Dhabi, is the large Al Dhafra Air Base. There are two asphalt runways with a length of 3661 meters. Al-Dafra is shared by the UAE Air Force and Air Force and aviation US Navy. 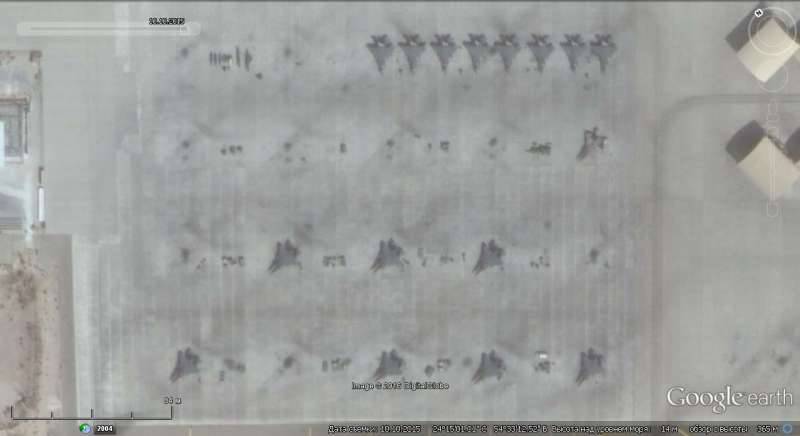 American military aviation is represented here by F-15E and F-22А and F / А-18 aircraft. In addition, the DRLO E-3D aircraft, the newest KS-46A tankers and the military transport C-130H and C-17 are based here. 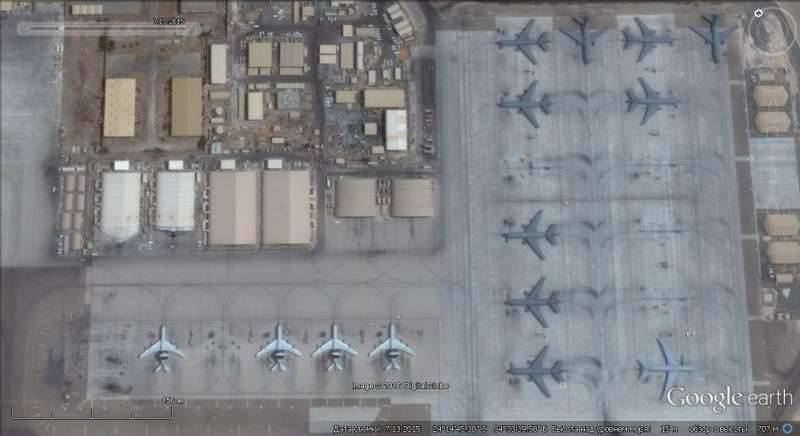 In the interests of the National Security Agency from the Al-Dafra airbase, reconnaissance aircraft U-2S and heavy drones RQ-4 Global Hawk operate. 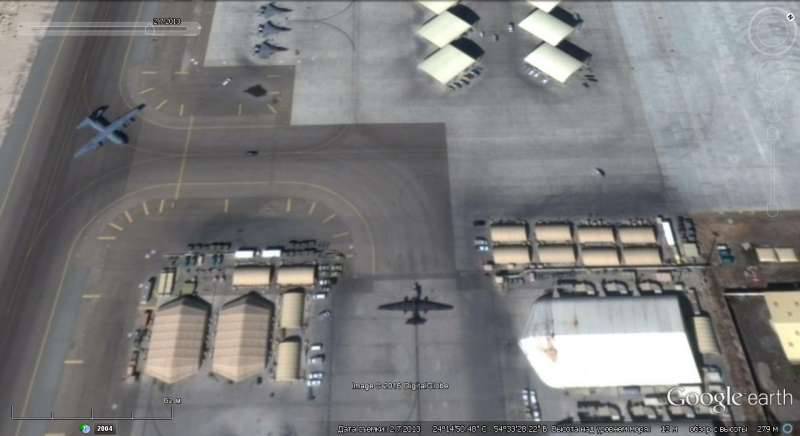 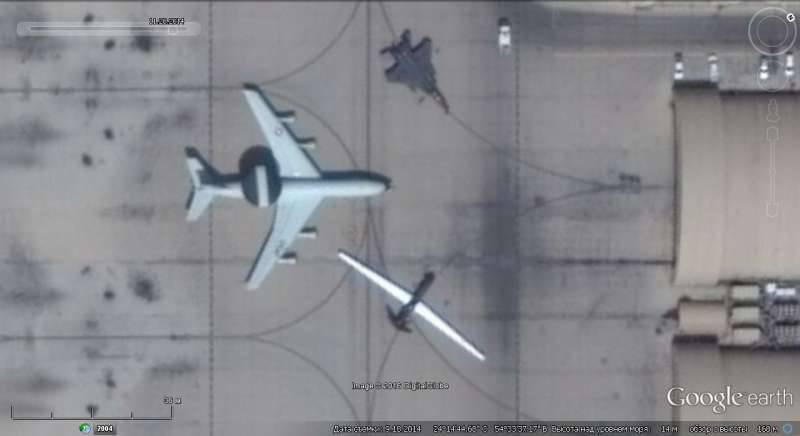 Several American bases are located in Kuwait. The 30 km from the Kuwaiti-Iraqi border is the Ali Salem air base (Ali Alm Air Base). This airfield is shared by the Kuwaiti and US military. In its western part, which is at the disposal of the Kuwaiti air forces, are placed the training center "Hawk" and "Tukano", as well as helicopters SA 342 Gazelle and AH-64D Longbow Apache. The eastern part with large-scale parking is made available to Americans. On a permanent basis there are military transport aircraft C-17 and C-130, as well as patrol P-3C. 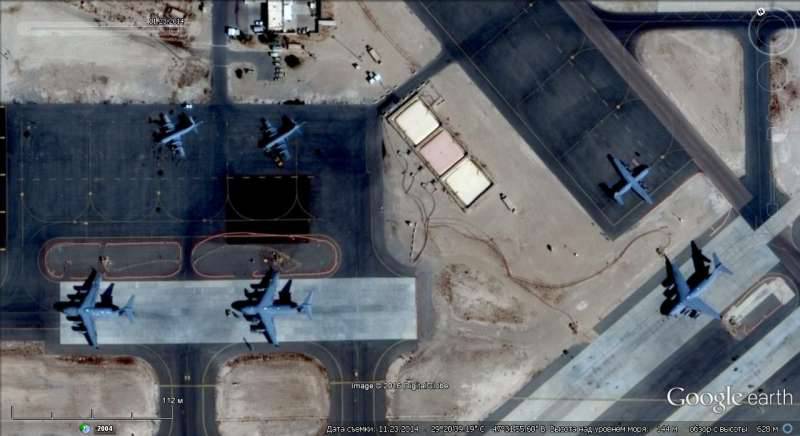 From the al-Salem airbase, the American MQ-1 Predator and MQ-9 Reaper drone drones operate. Their range allows you to control from here most of the territory of Iraq. 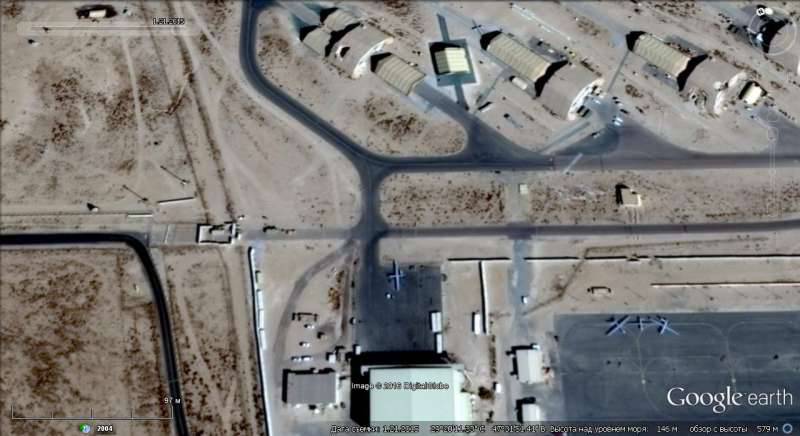 East of the airfield Al Salem deployed US air defense system "Patriot", its launchers are oriented to the northeast in the direction of Iran. 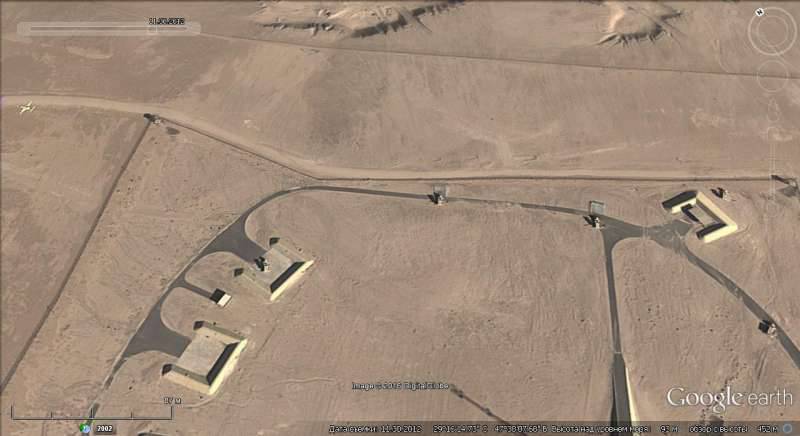 Satellite image of Google Earth: the position of the American Patriot air defense system in the Al Salem area; in the upper left corner you can see the landing plane

In total, Kuwait has five Patriot SAM batteries installed in concreted capital positions. Most of them are deployed around and even in the capital itself - Kuwait.

All launchers are directed to the north. In this regard, part of the PU is unprotected by caponier, since the positions initially at the construction stage were oriented towards Iraq, to ​​the west. 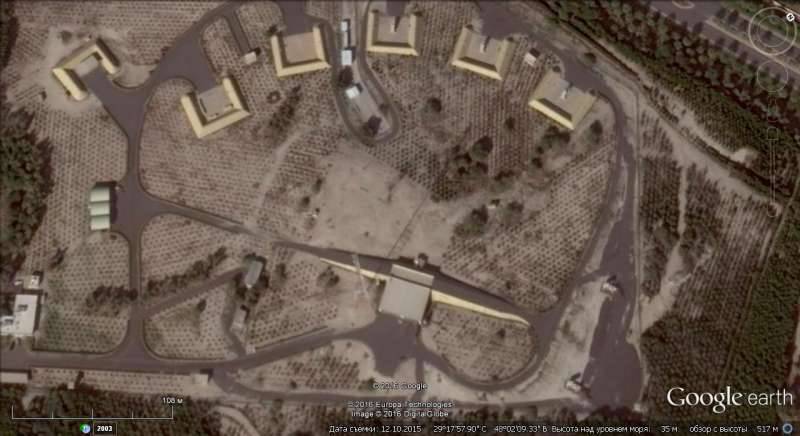 From 1 December 1998, combat aircraft and drones of the 332 expedition air wing (332 AEW) are based at the Ahmed Al Jaber Air Base, a Kuwaiti airbase. The deployment of US military aircraft in this area took place under the pretext of protecting US Middle Eastern allies from the "Iraqi threat."

After the invasion of the pro-American coalition in Iraq by the 2003 troop year, the F-16C / D and A-10С aircraft, which were at the airport of Ahmed Al Jaber, took an active part in delivering air strikes against targets in Iraq. Later, part of the aircraft from here was relocated to Iraqi Balad (Balad Air Base) and Kirkuk (Al Hurriya Air Base) airfields. Unfortunately, the available images of American bases in Iraq are in extremely low resolution, and the most recent of them correspond to 2005-2010 years. 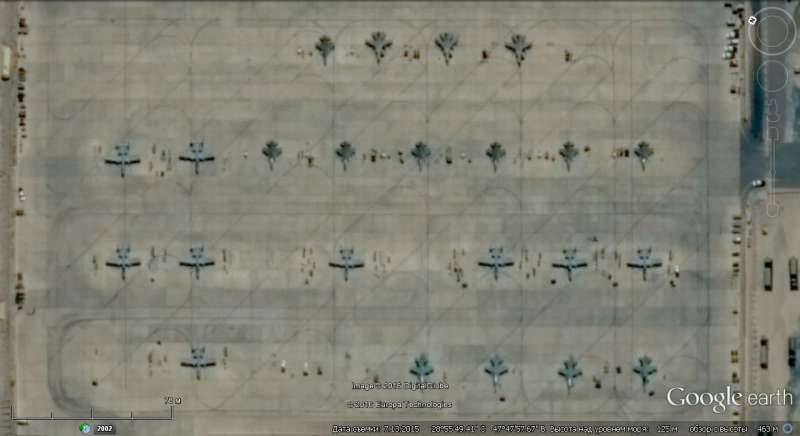 After the Iraqi airfields were formally placed at the disposal of the Iraqi authorities, the combat aircraft of the 332 expeditionary wing returned to the airfield of Ahmed Al Jaber. There are also four Italian fighter-bomber Tornado ECR. It was reported that airplanes from the Ahmed Al Jaber airbase participated in combat missions against the "Islamic State".

In 1996, the Qatar authorities, despite the fact that the country had a very small fleet of combat aircraft, began construction of the Al Udeid Air Base air base worth $ 1 billion. Obviously, this base was originally created in the interests of the United States.

In the second half of 2001, the United States Air Force began to settle down tightly in El Udeid. Until the new US air base was fully commissioned, the runway and the infrastructure of the Doha International Airport were used. At the moment, the military part of the Qatar Capital Airport also regularly receives American military transport aircraft, but on a much smaller scale.

By the beginning of 2002, a large number of military equipment had been transferred to the base. Thousands of American military personnel were deployed at and around the base, and fuel and ammunition depots were established. About 300 were transferred here tanks Abrams, 400 Bradley armored vehicles, a large number of armored personnel carriers and self-propelled artillery.

In 2005, Qatar’s leadership allocated $ 400 million to create the newest command and communication center, which is currently under American control. The headquarters of the Central Regional Command of the US Armed Forces and the US Air Force Command are stationed here. 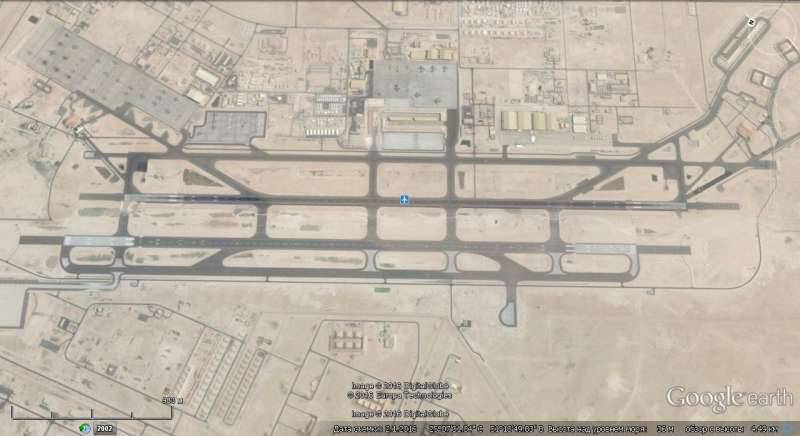 The runways of the base with a length of more than 4000 meters allow you to take all types of combat and military transport aircraft. More than 100 aircraft can be deployed in El Udeida. The base is equipped with the most modern control and communication systems. 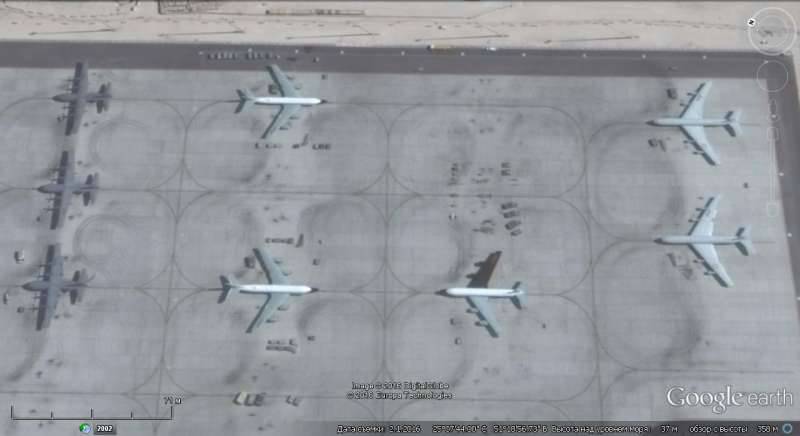 At the airbase there is a very extensive fleet of combat and special purpose aircraft. In addition to military transport aviation and tankers, here are based electronic reconnaissance and interception aircraft RC-135 V / W and jammers EA-6B, owned by KMP USA. The presence on the basis of a large number of air tankers makes it possible to refuel combat aircraft in the air during their transfer from the United States and during the performance of combat missions. 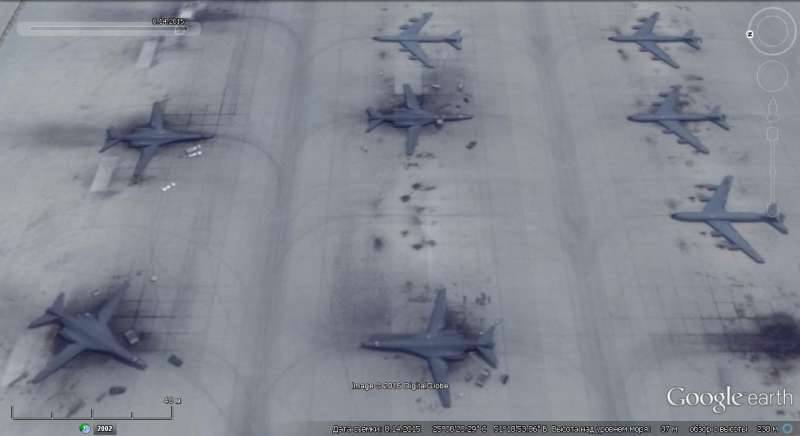 The base played an important role in supporting combat operations in Iraq and Afghanistan. Currently in Qatar is about 10 000 American military personnel. The Udeid Air Base is the most important of the 35 US military facilities in the region. In addition to the Department of Defense, there are facilities used by the US National Security Agency at its base in the south-eastern part. 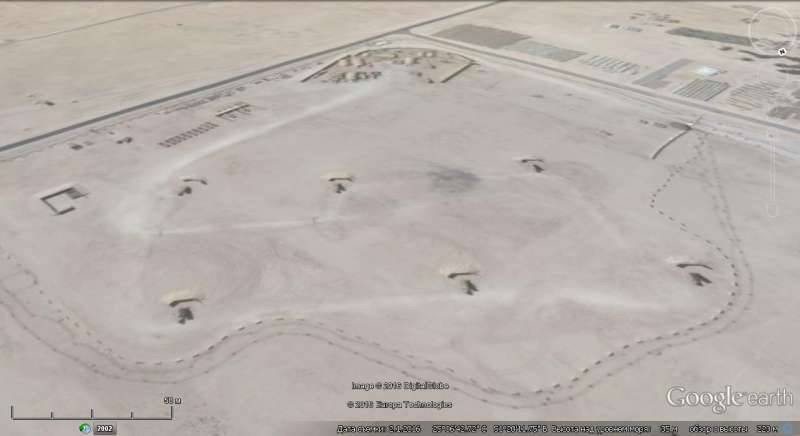 To protect the air base of El-Udeid, in its vicinity, two batteries of the Patriot air defense system were deployed. Launchers are aimed in the north and east direction. It can be noted that the number of US air defense systems deployed in the Middle East is unprecedented and many times higher than the number of anti-aircraft batteries in Europe. Virtually all major US military facilities in this region have anti-aircraft cover.

In the south of Bahrain, near the coast of the Persian Gulf, the American military air base Isa (Isa Air Base) has been operating since 2009. A runway with a length of more than 3800 meters can take all types of aircraft. 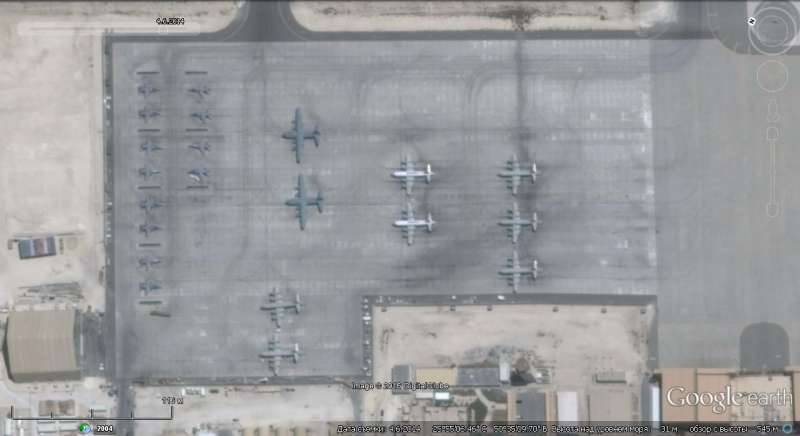 On satellite images here you can observe the F-16C / D fighter jets, the P-3C naval base patrol aircraft and the rather rare electronic reconnaissance aircraft EP-3E. In 500 meters to the south of the runway, there are positions for the Patriot air defense missile system.

Saudi Arabia is one of the closest and most influential allies of the United States in the Middle East. At the moment, there are no large US military contingents with equipment and weapons in the territory of the kingdom. Currently, there are several thousand American advisers and technicians in the kingdom who assist in the training of Saudi armed forces.

The latest US military bases in Saudi Arabia were closed at the end of 2003, after the end of the active phase of the Iraq war. However, close military cooperation between the countries continued. Military transport, refueling aircraft and reconnaissance aircraft of the United States always used Saudi airfields if necessary. The most common use for this is the King Abdulaziz Air Base air base in the suburb of Dhahran and the King Faisal Naval Base suburb of the runway. At the moment, Saudi troops are fighting in Yemen, and the United States is actively supporting them. It mainly consists in providing intelligence. In addition, American armed UAVs operate from Saudi territory.

In the Israeli Negev desert, near the nuclear facility in Dimona, there is an American radar center. The most notable part of it are the two 400-meter radar masts. It is believed that this radar center is designed to track ballistic missiles in space and to ensure the issuance of target designation of ground-based anti-missile systems. 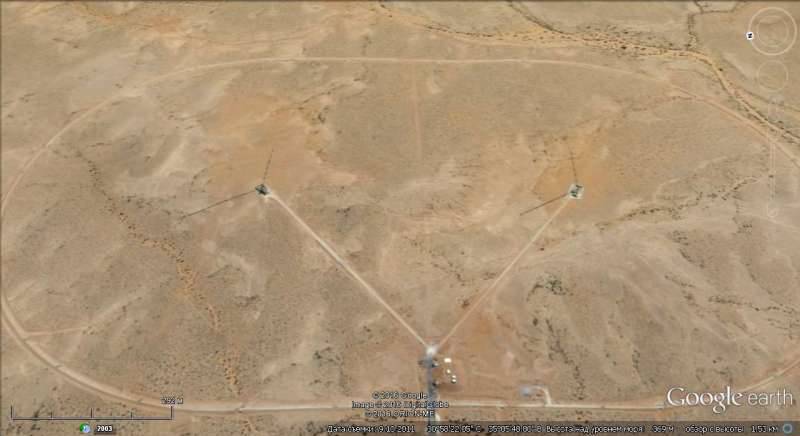 This object is owned and operated by US personnel, while the data is transmitted to the United States and to the Israeli operational anti-missile center.

In addition, in the same area there is a position of the radar stationed on the balloon system JLENS. JLENS aerostats are part of the SEC (Cooperative Engagement Capability) radar complex. This complex can be used in the interests of heterogeneous forces across the theater. 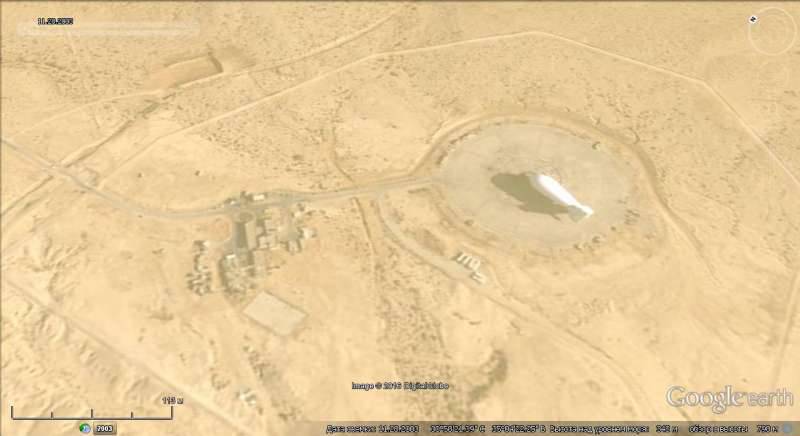 Information received from the balloon radar is transmitted via fiber optic cables to the ground processing complex, and the generated data on land, sea and air targets are communicated to consumers. In this case, the JLENS system means allow early warning of the approach of enemy aircraft and cruise missiles long before they are detected by ground-based air defense radar.

In addition, near the complex in Dimona, on Mount Keren, the American radar AN / TPY-2, which is part of the THAAD anti-missile system, is on combat duty. The AN / TPY-2 radar can detect BR warheads at a range of 1000 km at the 10-60 ° scan position angle. This station has a good resolution and is able to select targets against the background of debris from previously destroyed missiles and separated stages. In addition to Israel, the AN / TPY-2 radar is deployed in Turkey, at the Kurecik Air Force Base, and in Qatar, at the Udeyd Air Base, and also in Okinawa. But, unlike Turkey and Qatar, the Israeli military has its own anti-missile systems.

As part of the Australian-American defense cooperation in the central part of Australia, southwest of the city of Alice Springs, the Pine Gap reconnaissance complex, part of the ECHELON global information collection system and satellite infrared system, operates under the joint control of the US and Australian authorities. SBIRS missile attack warnings.

The site is of strategic importance because it allows us to control American spy satellites covering a third of the globe. This area includes China, North Korea, the Asian part of Russia and the Middle East. 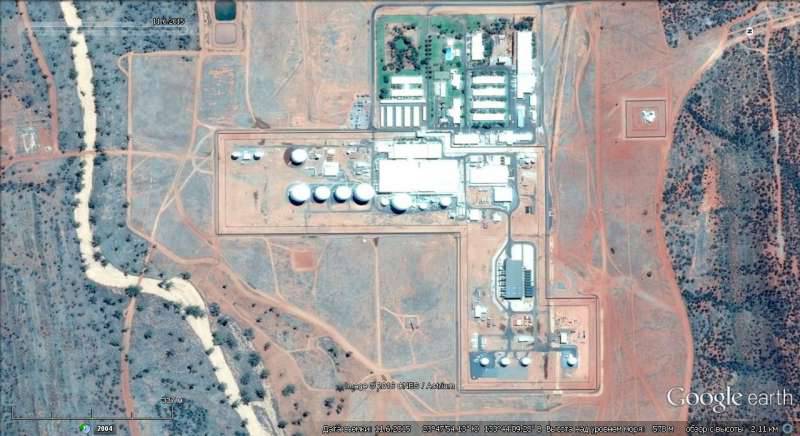 Officially, the complex is designed to control and track spacecraft in near-earth orbit. However, according to published information, two dozen antennas and complex equipment work in the interests of the US Central Intelligence Agency (CIA), the National Security Agency (NSA) and the National Intelligence Agency (NRO). In total, around 800 employees work at the site. Their tasks include receiving and processing information from geostationary satellites about intercepted telemetry and communication radio signals, radar characteristics and air defense systems. The equipment of the Pine Gap complex is also involved in reconnaissance flights over the Pacific Ocean of the RQ-4 Global Hawk UAV.

Author:
Sergey Linnik
Articles from this series:
US foreign military bases in the images of Google Earth. Part 1