A working NATO methodology for the sale of bronchium to Lithuania

April 26 2016
50
Lithuania is preparing for the largest artillery exercises for the entire history its independence. We are talking about the teachings "Fire salvo 2016", which will be held in the summer. One of the formations that has already begun active training is the artillery battalion named after Romualdas Gedraitis (Rukla), which is commanded by no less than Lieutenant-General (!) Of the Lithuanian armed forces (Aushrius Buykus).


According to Lieutenant-General Buikus, for the first time Lithuanian soldiers will conduct firing from the German Panzerhaubitze and not only. In total, the course of the exercise will involve eight howitzers. General Buikus noted that four of them would be provided by the Bundeswehr military personnel (Germany) for the time of the exercise. Four other self-propelled howitzers - as if "Lithuanian". They were acquired by the Ministry of Defense of the country, and the first units of this type of weapons will arrive in the country in May.

Commander of the Lithuanian artillery battalion relied on by the Baltic portal BNS, said that for the first time in a long time, servicemen serving in conscription would be allowed to fire.

It is worth recalling that the call to the Lithuanian army was resumed at the initiative of Lithuanian President Dalia Grybauskaite, and the call-up service lasts 9 months. And if in the first “recruiting session” in Lithuania there was an influx of volunteers between the ages of 19 and 26 years (such are the boundaries of the draft age in the Republic of Lithuania), then there are more and more problems with each new draft wave. Volunteers quickly “ended”, and given the fact that the planned number of recruits is increasing, the percentage of non-attendance at the agendas is growing at a significant pace. The most common reason for non-attendance on the agenda is the absence of a young person at his address. Relatives answer: he takes care of, they say, an elderly great-aunt somewhere near Warsaw — he cannot come, he will not leave his granny alone ...

Lithuanian public organizations publish reports that every third Lithuanian young person who has been educated tries to go abroad in search of work. And if while the plan of an appeal manages to be carried out, then with each its new stage process becomes more and more difficult.

However, about the teachings ...

One of the directions of the exercises is the suppression of artillery batteries of a conditional opponent. To do this, it is planned to use (according to the Lithuanian battalion commander in the rank of general) 105-mm guns, the firing of which will be carried out at a distance of 11 km, as well as 155-mm PzH2000 with a firing range of 40 km.

In total, Lithuania acquires 16 artillery mounts from Germany, three of them at once for spare parts. Supplement from General Buikus about spare parts eloquently testifies to the fact that the equipment goes to Lithuania.

In addition, the Lithuanian Defense Ministry plans to purchase from NATO partners 26 used command and control machines M577 and six also used armored repair and evacuation vehicles (BREM) BPz-2. The beginning of the creation of this technology refers to the 60 years of the last century. And there is a technique and even earlier production.

Lithuania, as a state whose budget currently spends the least amount of money (compared to NATO partners), is trying with all its might to bring its military spending to the NATO standard - 2%. And therefore, they do not hesitate to buy even outright scrap metal, which other countries of the North Atlantic Alliance send to Lithuania, not without pleasure, whose authorities live from one speech about “probable Russian aggression” to another. 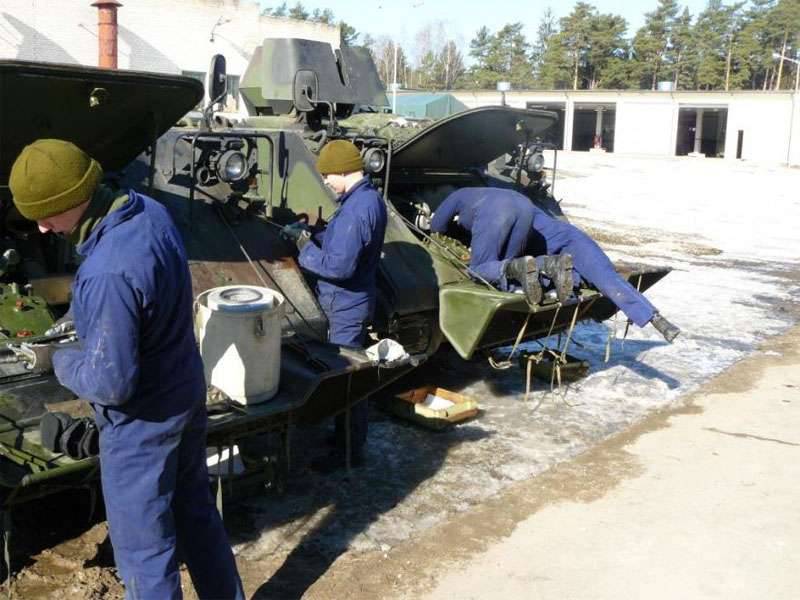 In this regard, Lithuania, and other Baltic countries, for the “partners” in NATO are turning into an ideal platform for recycling (and also for the Baltic means) of armor. And so that the “three Baltic tigers” would buy the “used” (often 30-40 years) military equipment more actively, new and new training maneuvers are being developed at NATO headquarters.

The principle is simple and straightforward: a document is dropped in Vilnius, which says that large-scale artillery exercises along the NATO line are coming, for example, they say, countering Russian “aggression”, all that ... The defense minister begins to recall and what, in fact, artillery is at his disposal. Recalls the battalion of them. im.Romualdas Gedraitis. While he recalled, another directive comes from NATO - serve, you understand, self-propelled howitzers and evacuation vehicles, for they must be involved in maneuvers. - But where will I get you these self-propelled howitzers? - the Minister of Lithuanian Defense is being killed. - It does not matter, they answer in Washington, Berlin and Brussels - buy from us. If there is no money for a new one, then we will sell an excellent, but in some places “second-hand”, equipment - the soldiers will clean up, tint, it will look like a new one ... You look, it will even shoot a couple of times ...

In addition to the Lithuanian military, military personnel from the USA, Portugal, Germany, Latvia and even Ukraine will take part in the “Fire Salvo 2016” exercises.

It is reported that not only artillery units will be involved in the exercises, but also military personnel of other types and types of Lithuanian troops. Preparation for the exercises is going on in several Lithuanian training grounds.

That's how they live ... They will buy several German or American howitzers and armored vehicles. Shoot from artillery guns, if, of course, does not jam. Disassemble the two, to collect one - and instantly build a report on the "global opposition to Russia."

And in the headquarters of NATO, in the meantime, the new plan will ripen in order to plant Balts on the purchase of the North Atlantic military junk. The new plan is another "large-scale" exercises, for example, with the maritime component. And the same Dale Grybauskaite together with the ministers will have to shell out for German or British boats, without which, as they say in NATO, the exercises will not be recognized as successful. Five boats will buy, of which three are again for spare parts, so that the other two will not go to the Baltic bottom ...

It seems that soon in the Baltics we will have to prepare a landfill not small in size for storing Chermet’s equipment, which was bought from “partners” in NATO, and which, having fired two times, ordered to live a long time. The landfill is for warehousing, after all, they might have melted it, letting it go to a new, but only where is the Baltic industry? .. Although, on the other hand, why create some kind of landfill for storing NATO armor to be made beautifully? create a battalion (well, the same Romualdas Gedraytis), appoint a whole general to the battalion commanders and supply the formation with a NATO rusting background, so that the conscripts were against the background of what to do.

Ctrl Enter
Noticed oshЫbku Highlight text and press. Ctrl + Enter
We are
New propaganda center of the Bundeswehr“Indra-2012” - to be teachings!
Military Reviewin Yandex News
Military Reviewin Google News
50 comments
Information
Dear reader, to leave comments on the publication, you must sign in.