April 25 2016
157
At the beginning of May, a BBC television documentary will be released. It will be presented version, according to which the Malaysian "Boeing" over the Donetsk region could shoot down a Ukrainian fighter. “False masks are beginning to subside,” A. Pushkov commented on this. German media in the meantime told about the mass protests that took place in Germany before the visit of Barack Obama. Leading world agencies also cover the EU’s tough ultimatum to Kiev: Brussels took the last 100 days to reform for the latter. Meanwhile, Putin was called a genius in the newspaper The New York Post. 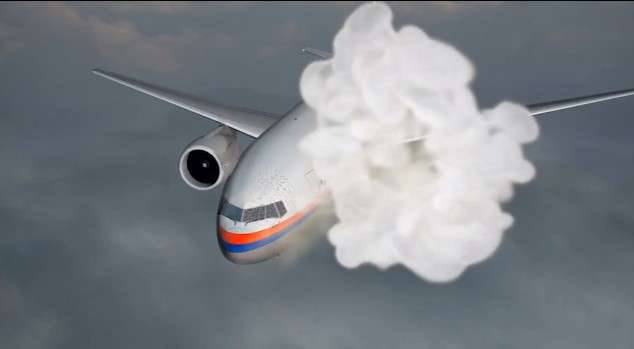 Screenshot from the video on the newspaper’s website Mail Online

Apparently, the Western media are tired of lying, and also tired of their own politicians. Otherwise, it is difficult to explain all that shaft of materials in which Putin is glorified, the corrupt “under-reformed” Ukraine is scourged, and protests are being sent in Germany, where the “hegemon” B. H. Obama arrived with speeches.

P. Denby in the newspaper Mail Online talks about the “new data” that allows you to take a different look at the tragedy with the Malaysian airliner, performing the MH17 flight in July 2014.

The new data show, the author notes, that the plane of a Malaysian airline was shot down by a Ukrainian fighter, and not a ground-to-air missile at all. These “murderous accusations” will be voiced not by anyone, but by the BBC television and radio company. Soon a documentary film will be released on the screen, in which curious hypotheses of the tragedy will be put forward, including the assumption that the explosion was staged by terrorists supported by the CIA.

Boeing 777 exploded over eastern Ukraine on July 17 2014. Killed 298 people, reminds edition. In official reports of Kiev, it was previously noted that this plane was allegedly shot down by a Russian-made Buk missile. The rocket was launched from the "separatist" territory. However, the testimony of witnesses interviewed by journalists "BBC", at odds with the assurances of Kiev. People say they saw how the plane was shot down by a fighter.

One of the witnesses, Natasha Beronina, says she saw an attack in the sky. Black smoke, two planes, “small as silver toys”, one of them flew around the other, and then there was an explosion. The attacked aircraft flew in the opposite direction. Another witness says that he even saw the rocket fired.

The Sunday Express correspondent noted that German journalist Billy Sixs interviewed 100 witnesses to the disaster, and seven of them also reported that they had seen a fighter.

And here is another extraordinary version, voiced in the film: the plane was blown up as part of the “terrorist operation” supported by the CIA. Terrorists "installed two bombs on an airliner".

This statement was put forward by Sergey Sokolov, leading a private investigation into the causes of the disaster. According to him, the CIA helped the Ukrainian secret service and the Dutch security service to carry bombs on the plane in the Netherlands. In his opinion, the terrorist act was organized in order to strengthen the sanctions imposed on Russia, as well as to show the world the "barbarism" of Russia. Finally, the United States planned at that time to strengthen NATO’s presence in Europe, particularly in Ukraine.

The documentary “The Secret Documents: Who Shot Down MH17?” Will be released on the evening of May 3 on BBC Two.

Alexey Pushkov, the head of the State Duma Committee on International Affairs, commented on the announcement of this film in "Twitter".

"There was a film Moreira about Independence" Masks ripped off. " There will be a film of the Air Force, which can bring the truth about the downed Boeing closer. False masks are beginning to fall. ”

While the British journalists announced a new (probably somewhat unusual for the BBC) film, German correspondents told another unpleasant truth for the “partner” of the USA: they reported on mass protests in Hanover, which took place on the eve of Barack Obama’s visit.

O. Mishchenko on German Wave writes about the thousands of demonstrations, held in Hanover on the eve of the visit of the US President. People protested against the EU-US Free Trade Agreement (TTIP). About 35 thousand people participated in the action.

According to Deutsche Welle, German organizations for the protection of consumer rights and the environment fear that TTIP will benefit only large enterprises and put European social and environmental standards at risk.

Next western news speaks of the dramatically changed attitude of Europe towards Ukraine.

According to him, the new Ukrainian government has 100 days in the office for reform. Only in this case, Kiev will receive a tranche in 600 million euros in the form of "assistance".

The reforms include the fight against corruption (this includes the appointment of a new prosecutor general, who really approves of the reform policy in the country) and the exact observance of the program of the International Monetary Fund. Attempts of the people of Kiev to conduct negotiations with the IMF, Khan does not approve. According to him, it is “important” that the new government does not have “no intentions” and does not make “any attempts” to revise the plan previously agreed with the IMF.

"Reuters" recalls that Prime Minister V. Groysman took office against the background of the growing frustration of the people about zero progress in the fight against bribery and the absence of any transformation of the Ukrainian economy after street protests on Maidan in 2014 year.

Khan pointed out that “everyone” wants to be sure that the new government “intends to follow the course of reforms and achieve real changes.”

"Usually, the government receives a grace period of 100 days, but in the case of Ukraine, 100 days should be a period of concrete actions and accomplishments."

Other commentators in the West mock Putin "the king of all Russia" and consider him "boor" and "clown."

Ralph Peters doesn’t like the behavior of “this guy” (Putin). However, "his ability should be respected."

Putin "restored Russian pride by recreating the attributes of a great power." One of its main advantages is that “pampered Western commentators” are considered “weakness”. “He did not go to the right schools and does not behave as he should. He was an inconspicuous lieutenant colonel of the KGB. He is rude, ”develops the idea of ​​the author.

And what did the Western elites do? Yes, they are a whole decade and a half mocked Putin. And over the years he has made his country rich, he revived the army, expanded his territory and expanded his influence abroad. And at the same time "humiliated the United States of America."

"Putin punished Georgia, conquered the Crimea, invaded Eastern Ukraine, and this month provoked hostilities between Azerbaijan and Armenia in order to prevent oil-rich Azerbaijan from flirting with the West."

In addition, Putin "supported Iran and arms it with the latest models of air defense missiles, which will make it so expensive that any attack by the United States or Israel will cost them."

He successfully intervened in the situation in Syria, keeping President Bashar al-Assad in power.

It is a success where it is about NATO. By making "one dangerous provocation after another," he shows no desire to retreat. Most likely, he gets satisfaction by pointing out the place of the United States and their president.

Putin is not at all concerned about what the Western elites think about him. He "plays to a global audience." And the viewer sees him as “brave and lucky,” and this against the background of cowardice and inefficiency of the West.

Putin’s popularity rating is higher than Hillary Clinton and Donald Trump put together. And, unlike the current American leader, Putin knows his people. He "came from the street, not from Harvard."

About the “Boeing-777” shot down over Ukraine in the West, they wrote earlier that this was the work of the “separatists”. The media and politicians unanimously blamed Russia, which supposedly supports these “separatists” with advanced military equipment. It came to a complete madness: other conspiracy therapists agreed almost to the point that Putin himself planned the attack on the plane. Other conspiracy therapists, meanwhile, developed a different theory: that Putin himself was supposed to fly at that time over the Donetsk region, and Poroshenko aimed at him. Now a third hypothesis has appeared: it turns out that a strike on a passenger liner is the work of the dirty hands of the CIA, which is hiring terrorists right in the Netherlands. In any case, nothing is said about the participation of Moscow.

Where are the roots of such films on the BBC? One of two things: either the West is tired of lying on the air, or the TV viewers “vote with their feet”, refusing to watch programs where Russia is infinitely and monotonously filthy, and Putin calls him a tyrant, a dictator, or a tsar creating an oprichnina. In addition, one must assume that Europe is sick of Ukraine with its constant lies, demands for money and corruption. precisely because the separatist and gave a hundred days to reform. There will be no reforms - no more money.

Ctrl Enter
Noticed oshЫbku Highlight text and press. Ctrl + Enter
We are
Results of the week. “I am tired of these faces. There are many people, but no people. ”Situational analysis of the death of the MH17 flight (Malaysian Boeing 777), made on the basis of engineering analysis from 15.08.2014
Military Reviewin Yandex News
Military Reviewin Google News
157 comments
Information
Dear reader, to leave comments on the publication, you must sign in.