April 25 2016
10
The Strv m / 42 is Sweden’s medium tank during World War II. This combat vehicle was created by Landsverk AB in 1941-1942 on the basis of a lightweight tank Strv m / 40. In total, from 1943 to 1945, 282 Strv m / 42 tanks were assembled in several versions. For a long time, this combat vehicle was the basis of the tank fleet of Sweden. Fate prepared the tank for a long service. After the modernization carried out in 1957, the tank received a new turret with a 75 mm long-barrel gun and the new designation Strv 74. In this form, the tanks remained in service with the Swedish army until the end of the 1970s.

Tank Strv m / 42 became the crown of the development of the Swedish tank building during the Second World War. This medium tank at the time of its creation fully met the requirements of the time, and for a country that managed to maintain neutrality in the two world wars, its combat capabilities were sufficient. While on the battlefields in Europe and Africa, German, Soviet, British and American combat vehicles converged in a deadly battle, in Sweden, in the workshops of the Volvo company, Stridsvagn m / 42 tanks slowly assembled, none of which did not take part in the hostilities.

At the end of the 1930 for the Hungarian armed forces, the Swedes developed the Lago medium tank, which weighed 15 tons and armed with a 47-mm gun. This tank had undoubtedly related resemblance to another very successful Swedish machine L-60, which gave way to the life of a whole family of light tanks (Strv m / 38, 39, 40). The prototype of the Lago tank was fully prepared and demonstrated by the Hungarian military, but they decided to take the Czechoslovak T-21, which is simpler to produce, for their own tank “Turan”. At the same time, the efforts of the Swedish designers were not in vain. By the beginning of the 1940, the Swedish army realized that it needed its own medium tanks. Largely from the Lago project, the Strv m / 42 medium tank was born, armed with a short-barreled 75-mm Bofors rifled cannon and three 8-mm machine guns. 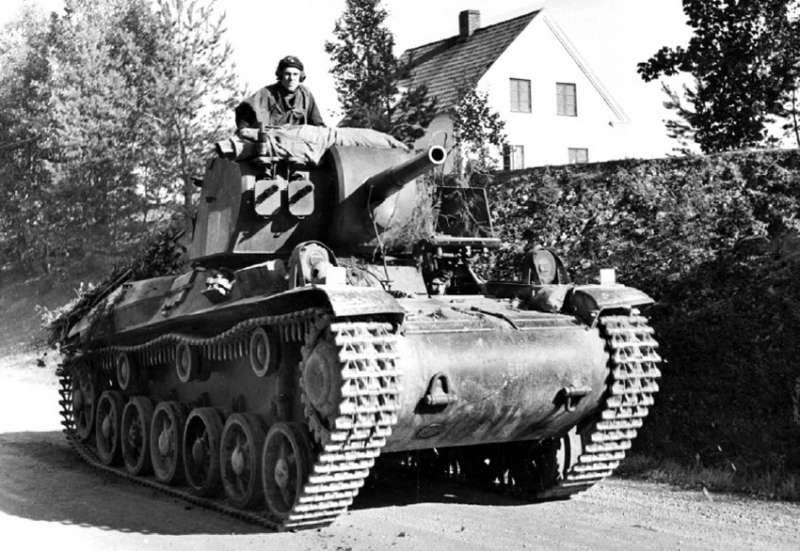 Outwardly, this medium tank strongly resembled a plumper and larger version of the light tank L-60. The car has been seriously redesigned and lengthened. Compared with the Strv m / 40 tank, the new combat vehicle had an elongated chassis, in which, instead of the 4-x, there were 6 track rollers and 3 supporting rollers on each side. At the same time, the mass of the tank has increased compared to Strv m / 40 almost 2,5 times - up to 22,5 tons. Improved and weapons. The 75 gun and two course machine guns of the 8 mm caliber paired with it were supplemented by another 8-mm machine gun, which was located in front of the tank hull.

Tank Strv m / 42 belonged to the combat vehicles of the classic layout. In front of the hull, there was a control compartment with a driver's seat, in the middle part there was a combat compartment, above which a welded, streamlined tower was installed, and a gearbox compartment was located in the rear part of the hull. A distinctive feature of the tank could be called its long and narrow body, the construction of which used cast parts. The regular crew of a combat vehicle consisted of four people. 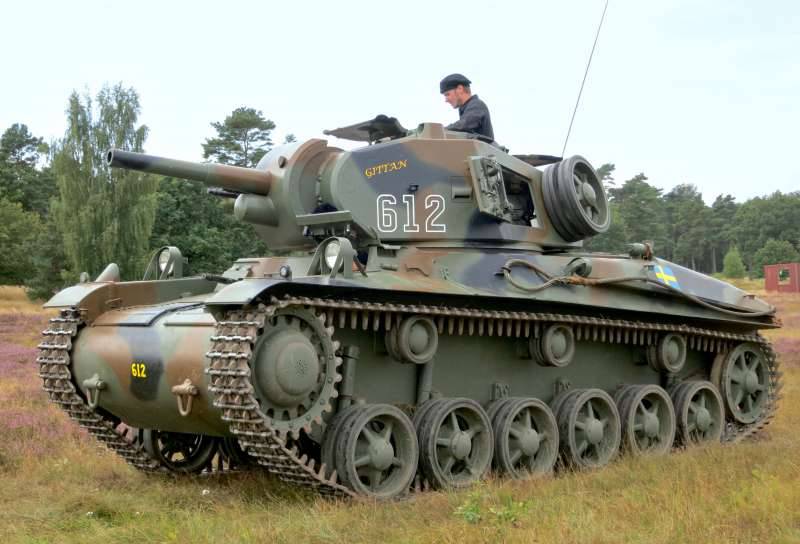 Curiously, the Swedes initially planned to use the Strv m / 42 as a heavy tank, but this machine did not belong to the generally accepted world classification as a heavy tank. Until the end of World War II from April 1943 of the year to January, the 1945 of the year in Sweden assembled the 282 tank in various modifications, which differed primarily in the transmission and power plant. In total there were 3 main variants of this medium tank:

It is worth noting that the electric transmission installed on the Strv m / 42TM tanks worked poorly, therefore, over time, all the Strv m / 42TM tanks of this modification were transferred to versions with hydraulic transmissions. If at the time of its development the medium tank Strv m / 42, although it didn’t have enough stars from the sky, was quite competitive compared to other combat vehicles of its production class of different countries, by the end of World War II, this tank was significantly inferior to the medium tanks Axis forces and the anti-Hitler coalition. 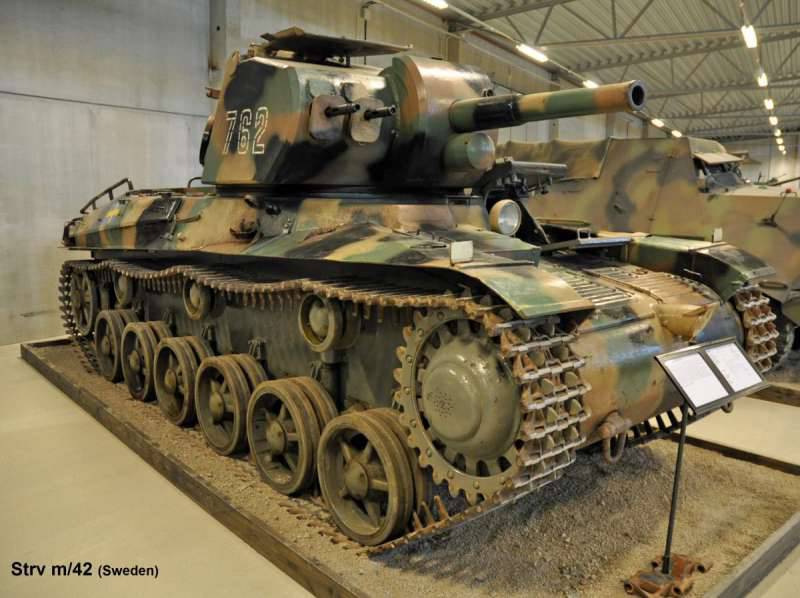 The chassis of the Strv m / 42 tank was used by the Swedes to create various combat vehicles at its base. In particular, already in 1942, an attempt was made to create an anti-tank SAU Pvkv m / 43, which was armed with an X / NUMX-mm L / 75 cannon with 50.5 ammunition. The gun used allowed the armor-piercing projectile to be sent at a target at a speed of about 56 m / s, which made this self-propelled gun a worthy opponent of any tank of those years. Acceptance of this ACS began only in the fall of 815, while the car had to be finalized, so it was finally ready only in 1944, remaining in service with the Swedish army until the beginning of the 1947s.

Also, the chassis of the tank Strv m / 42 became the base for self-propelled anti-aircraft installation. Over the creation of ZSU for the Swedish army, the designers thought relatively late - only in 1943 year. At the same time, the project Lvkv fm / 43 was proposed. This self-propelled self-propelled gun on the chassis of a medium tank was distinguished by placing two 40-mm Bofors 60 / L anti-aircraft guns (326 projectiles) in the open wheelhouse. The air cannon machine was released in a small series of 17 units over 1948-1949's. 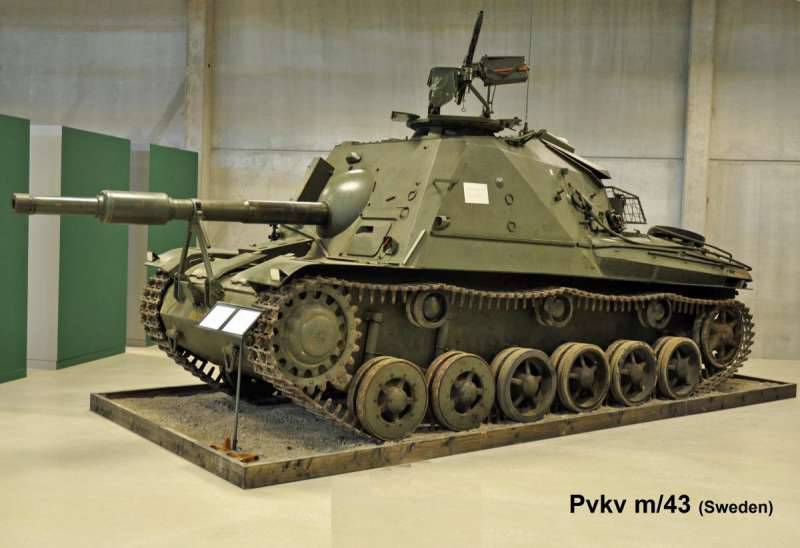 Surprisingly, pragmatic Swedes gave Strv m / 42 tanks a second life. In 1957, the Swedish designers created a new medium tank, guided by the concept of "cheap and cheerful." They took the Strv m / 42 tank as a base, installing a turret on it, in which they placed an 75-mm anti-aircraft gun with 60-gauge barrel length (initial velocity of the 840 projectile, m / s, rate of fire - 8-10 rounds per minute ). Each such “new” tank cost the Swedish budget 360 thousand crowns, while for every English Centurion the Swedes paid about one million crowns.

From 1957 to 1960, all Strv m / 42 tanks with a pair of Scania-Vabis L-603 engines were converted to the Strv 74 version. 57 tanks in the Strv m / 42 EH version also did not go for scrapping. After a minor alteration, which dealt mainly with the placement of machine guns and the installation of new means of communication, these combat vehicles, apparently virtually indistinguishable from the Strv m / 42, were adopted by the Swedish army under the designation Ikv 73. Ikv (Infanterikanonvagn) is a rather specific type of armored vehicles in Sweden, whose name literally can be translated as “infantry cannon machine”. Their task on the battlefield was the direct support of the infantry, such combat vehicles were in service with the infantry brigades of the Swedish army. 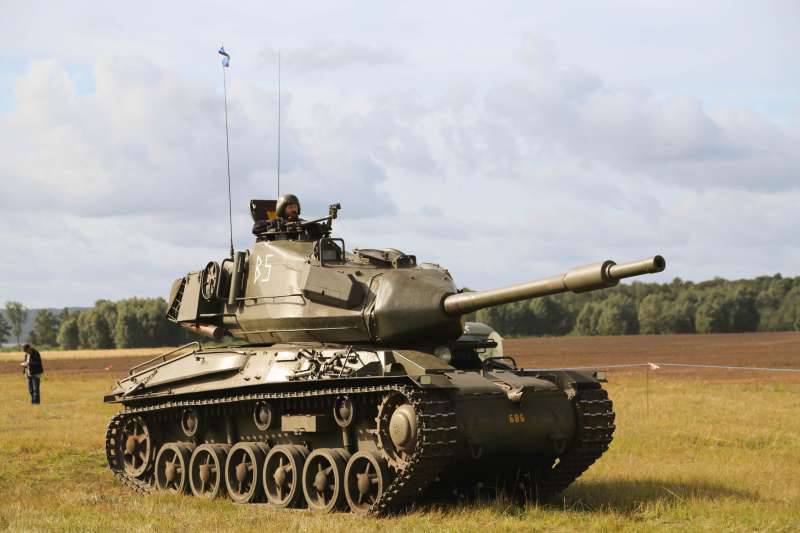 Tellingly, even the old towers from medium tanks Strv m / 42 as part of the "waste-free modernization" to Strv 74, pragmatic Swedes did not send for scrap. They set them up as stationary firing points (Värntorn, “defensive towers”) on key areas of the country's coast, as well as on airfields and in ports.