The reasons and probability of "restart" of production F-22A. Forecasted Raptor Deployment Sites 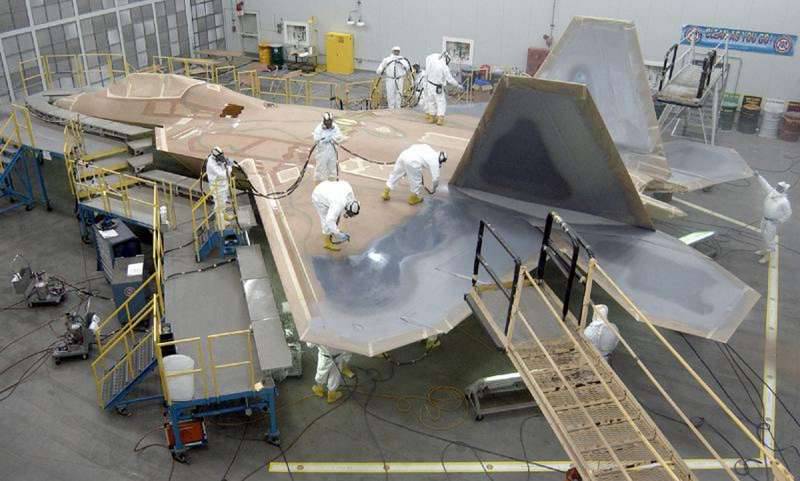 A complete shutdown of the Lockheed Martin production line for the serial production of the 5th generation F-22A Raptor multi-purpose stealth fighter aircraft in 2008 was a real strategic failure for both the US Department of Defense and Washington as a whole. The decision to halt production significantly limited the individual capabilities of the US Air Force, as well as NATO Allied Forces in achieving "total" air superiority in the most important conditional theaters of operations of the North Atlantic Alliance - the European and Far Eastern, as well as in the sky of Southeast Asia. The insufficient number of Raptors produced (187 vehicles) does not allow the US Air Force to distribute numerous air regiments of these fighters in Asia Minor, Asia-Pacific and Europe, since the airspace of the entire North American continent will lose protection aviation 5th generation air defense. Despite the fact that the US Air Force is armed with hundreds and thousands of F-15C / E, F-16C of the latest modifications, Washington knows that this fleet will not be able to oppose the enemy with what the Raptors are much more interested in. So the US House of Representatives started talking about restarting the production of these aircraft.

From mid-April 2016, the Congress Subcommittee on Armed Forces raised the issue of the cost of re-launching the production branch of the F-22A, and also made it possible to create an export version of the 5 generation fighter. The ability to export these cars was thrown back by the ban, which entered into 1998, to prevent the “leakage” of secret technologies to the enemy. But in the XXI century, when our engineering thought caught up, and even began to outpace the vaunted F-22A in terms of airborne radar tools, EW complexes, maneuverability, range (especially expressed in T-50 PAK-FA, Su-35С), the question of export again began to have a certain value. The importance of increasing the number of "Raptors" in the Air Force was repeatedly reminded by the head of the US Air Force General Michael Mosley, who, after the decision to stop the series, resigned in protest.

According to statements by the RAND research center, citing a representative of the Air Force, the restoration of the Raptors issue will cost the American treasury a pretty penny: 2 billion is needed only to restore all elements of production, plus 17,5 billion will be needed to produce new 75 machines. The fact is that the higher price (233 million dollars per unit) will be due not only to the current economic situation, but also the need to introduce improved avionics into new fighters. It is reported that the integration of the new element base will be made at the expense of the hardware and software of the F-35A fighters, which will allow the F-22A, in addition to the powerful AN / APG-77 radar among American fighters, to get the corresponding network-centric capabilities concerning tactical exchange speed information with other types of fighters, surface ships, DRLO airplanes, air defense missile systems, etc.

A very important fact is that of the 185 currently available F-22A, 149 belong to the Block 30 / 35 modification. A feature of this version is a software add-on that allows you to use synthetic aperture mapping mode of the terrain, which allows you to receive a radar image of photographic resolution. This made it possible to align with the F-35A in terms of air-to-ground and air-to-sea operations. Smaller than the F-35A radar signature (EPR 0,07 м2 against 0,3 м2) will allow you to operate over areas with thicker air defense and in the LPI mode closer to enemy fighters, I do not identify the type of own side.

The likelihood that by 2020, the Raptors will once again go into mass production remains high enough, since the cumulative implementation rates of the 5 T-50, J-20 and J-31 fighter projects will eventually outrun the fighter-program of dubious quality JSF and the Americans will lose any opportunity to confront Russia and China in Europe and the Asia-Pacific region.

As for the states to which simplified versions of the F-22A can be handed over, as well as the regions where improved American cars will be deployed, they will remain the same, but with some amendments.

In a more or less peaceful environment, the largest number of F-22A fighters will be based on air bases in Japan, Saudi Arabia and Western Europe (Great Britain and Germany). If a military conflict breaks out in this or that theater, the Raptor bases will try to push allies into the strategic depth so as not to lose their promising F-22A over the theater controlled area: the US Air Force will continue to observe the secrecy of the technology of the new fighter units, radar design AN / APG-77. Australia will undoubtedly become such a remote base in Australia, where already today the Americans are building the largest militarized stronghold against the Celestial Empire, preparing the transfer of the KC-10A “Extender” air tankers and the B-1B strategic bomber-bomber. It is also likely that the F-22A will be sold to the Australian Air Force, which will be able to reach out to any part of the Indo-Asia-Pacific region with the help of Extenders.

“In the event of a conflict, the European Raptors can be relocated exclusively to the UK or even further to the Icelandic Keflavik airbase.

If the escalation level of tension hangs over the whole of Front Asia, American fighters can be stationed in Pakistan or on the island, Diego Garcia, a military base in the Indian Ocean. But neither of these options is convenient enough. Accommodation in Pakistan is not completely secure, especially in view of the latter’s many years of territorial dispute with India. Diego Garcia is located more than 4000 km from the Middle East, which requires a long time to move the F-22A squadrons involved in the air operation. But the latter option looks more attractive.

The possibility of continuing the series of the best American fighters cannot be ignored in any way, just like leaving their further deployment in the future.

Ctrl Enter
Noticed oshЫbku Highlight text and press. Ctrl + Enter
We are
South African UAB and CD family "Raptor" for the operators "Mirage" and "Gripenov": Argentina "in transit"J-20A in the tasks of expelling the “backbone” of the US Navy from the western part of the APR
Military Reviewin Yandex News
Military Reviewin Google News
131 comment
Information
Dear reader, to leave comments on the publication, you must sign in.