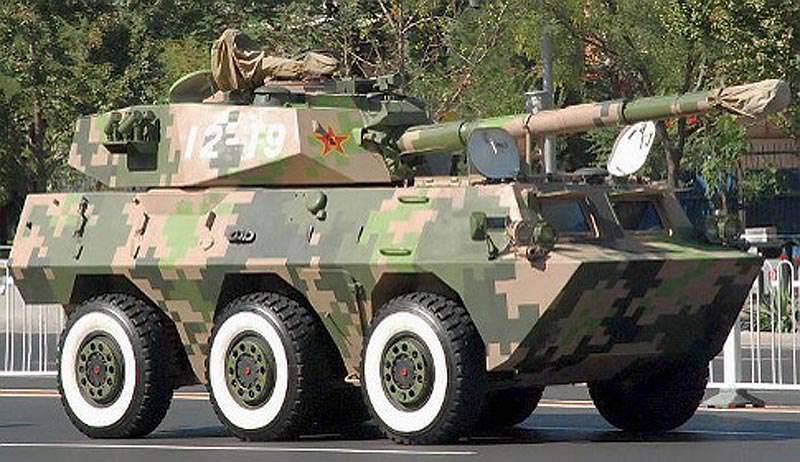 The Assaulter anti-tank unit is equipped with a triple turret armed with an 105-mm rifled gun that fires standard types of ammunition and laser-guided missiles.

The base armored personnel carrier WZ551 (6 x 6) was developed in the 60-ies of the last century to meet the needs of the Chinese army and since then it has been continuously developed. It is known that it was exported to at least four countries.

The newest version of the WZ551 family, designated WMZ551, is still being offered by NORINCO.

The Assaulter anti-tank unit (6 x 6) first appeared in public during a military parade held in Beijing in October 2009. In the Chinese army, wheeled self-propelled anti-tank gun was designated PTL-02. Presumably, Chad bought Assaulter's 10 units, and Senegal bought several units and Djibouti alone (and this country presented its only car at the parade). 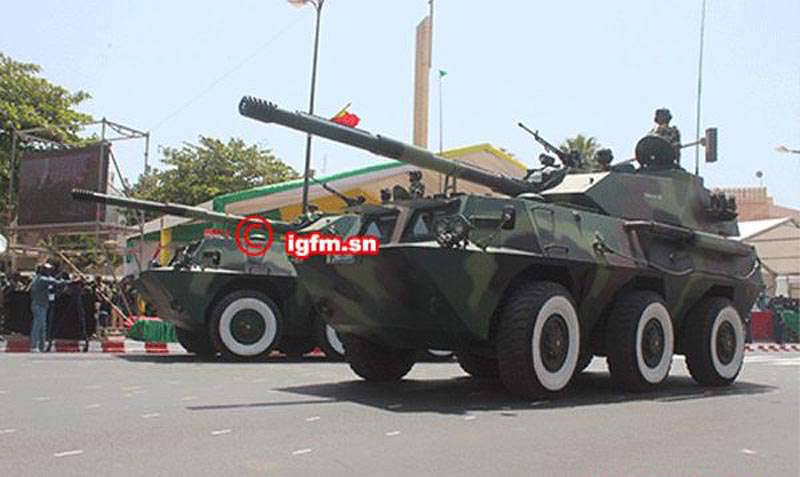 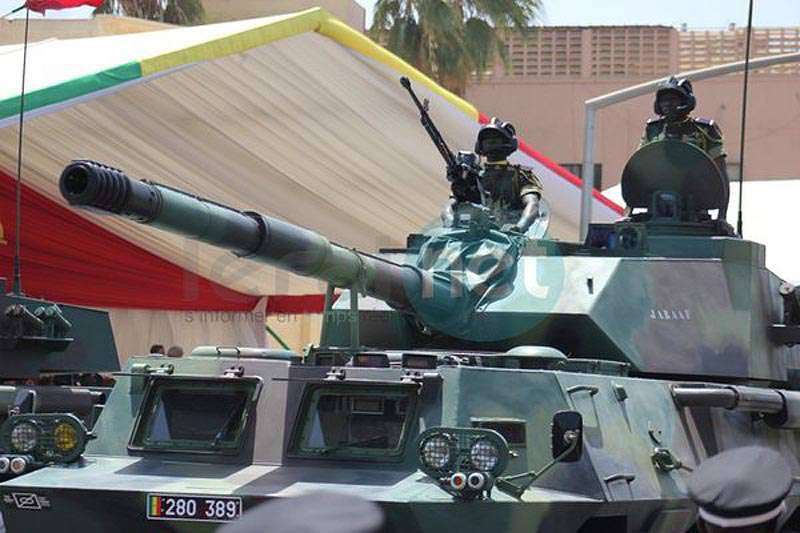 From the end of 2012, NORINCO began offering its 105-mm anti-tank wheeled vehicle under the designation WMA301.

Assaulter is, in fact, a deeply modernized chassis of the NORINCO WZ551B (6x6) armored personnel carrier equipped with a new three-seat turret. The hull and turret are all-welded, made of armored steel, which provides protection against small-arms fire. weapons and shell splinters.

The driver sits in front of the left, he has a one-piece manhole cover, the three periscopes integrated into it provide visibility in the front sector. The average daily periscope can be replaced by a passive night periscope.

To the right of the driver there is another workplace, above which there is also a one-piece hatch. In front of the driver and the next member of the crew windows with bullet-proof glass are cut out. In the combat zone, they can be closed with a hinged lid. On the sides of the front inhabited compartment also installed viewing devices.

105-mm anti-tank installation WMA301 Assaulter with a forward-directed turret, on the roof of which is installed 12,7-mm machine gun

Diesel power unit is installed behind the front compartment behind the driver, intake and exhaust grids are located on the roof, and the exhaust pipe is brought to the left side and extended back to the stern.

In addition to entering the car through the hatches on the roof, on each side there is a small door in the lower part of the hull between the first and second support rollers. There is also a door in the stern of the standard WZ551B series of armored personnel carriers. The vertical door opens to the right.

The triple tower is shifted slightly back from the center of the vehicle, the commander and the shooter are sitting on the left and loader on the right. The commander has a raised base and a one-piece manhole cover opening backward, plus viewing instruments.

The gunner sits in front and below the commander he has a day / night stabilized sight. Charging sits on the right in the tower, has a one-piece hatch, opening back.

The tower is armed with a stabilized low-pulse 105-mm rifled gun, which is equipped with a thermal housing, an ejection device and a muzzle brake.

In the stowed position, the trunk is fixed on a special stand located on the roof of the hull behind the front inhabited compartment.

It can also launch 105-mm laser-guided anti-tank missiles manufactured by NORINCO, which has a maximum range of 5000 meters. It is equipped with a tandem cumulative warhead, which neutralizes the dynamic protection and pierces behind it armor steel 650 mm thick.

According to the company NORINCO, 105-mm gun has a high probability of hitting the first shot at fixed and moving targets while the vehicle is moving. Also installed a system of automatic tracking.

The main armament is paired with a 7,62-mm machine gun, for self-defense and anti-aircraft missions an 12,7-mm machine gun is installed on the roof of the turret.

Along the sides, in the back of the tower, four-barreled smoke grenade launchers are installed, covering the front sector. The ammunition consists of 30 105-mm projectiles, four G2 missiles, 800 7,62-mm ammo and 480 12,7-mm ammo.

The standard WZ551 6x6 BTR is floating on the water and is driven by two water cannons installed in the stern. The anti-tank installation Assaulter with a combat mass of 19 tons does not float. 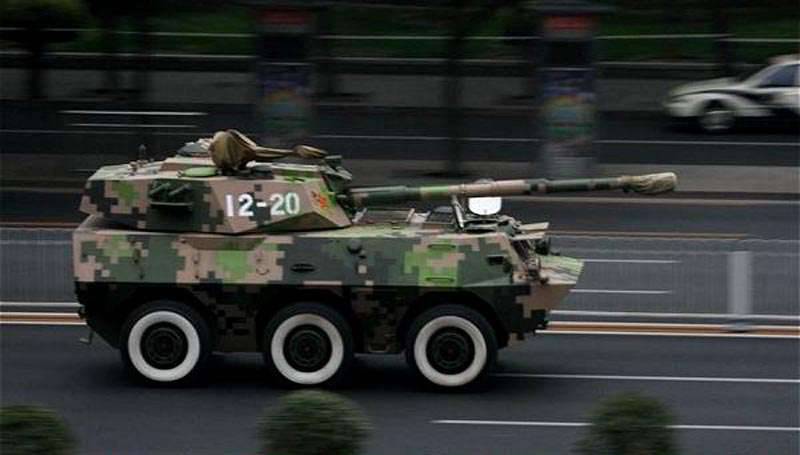 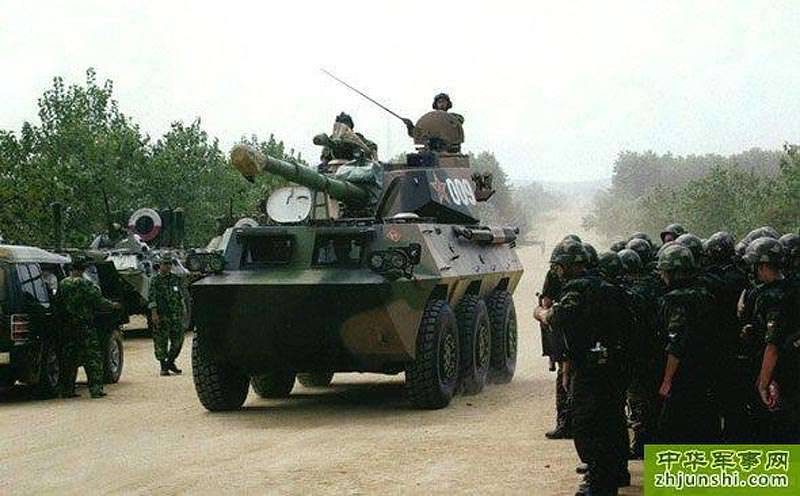 NORINCO has been offering the Assaulter with the 105 mm cannon on the market for many years, and as already mentioned, these units were sold to Chad and more recently to Senegal.

In October, 2009, China showed its newest weapons at a grand parade in Beijing, held in honor of the 60 anniversary of the founding of the PRC. For the first time new models of equipment and weapons were shown on it.

A self-propelled anti-tank unit PTL-02 with an 100-mm cannon was put into service with an artillery regiment of the 162-division of the Chinese army.

It has the same chassis of the WZ551 6х6 series, like the 105-mm Assaulter anti-tank unit, but is equipped with another all-welded, turret armed 100-mm cannon with ejection device, thermal housing and slit muzzle brake. On this machine, the 7,62-mm machine gun is paired with the 100-mm gun, and the 12,7-mm machine gun is installed on the roof of the turret.

A completely new turret was installed on one chassis, while the latter version has a turret similar to the one installed on the ZTD-05 landing vehicle.

The tracked airborne assault vehicle is in service with the Chinese army along with the ZBD-05 armored personnel carrier. It is possible that they have now replaced the outdated Type 63A amphibious assault tank with the 105-mm cannon. 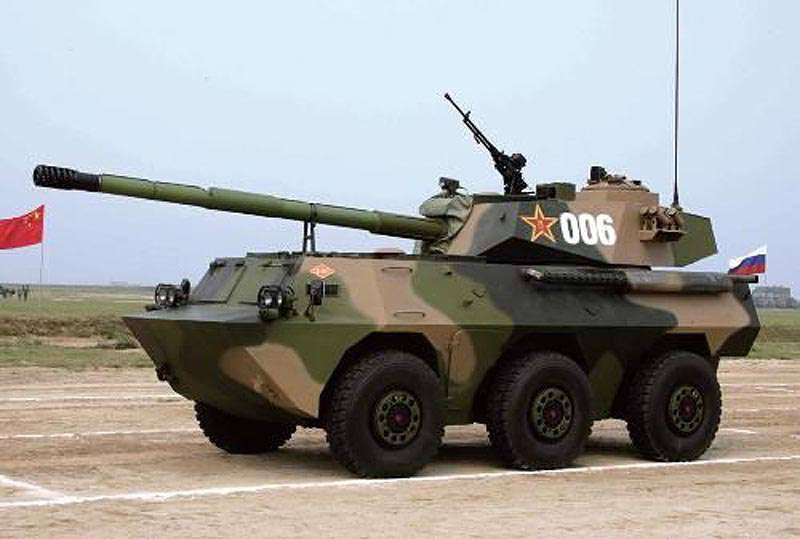 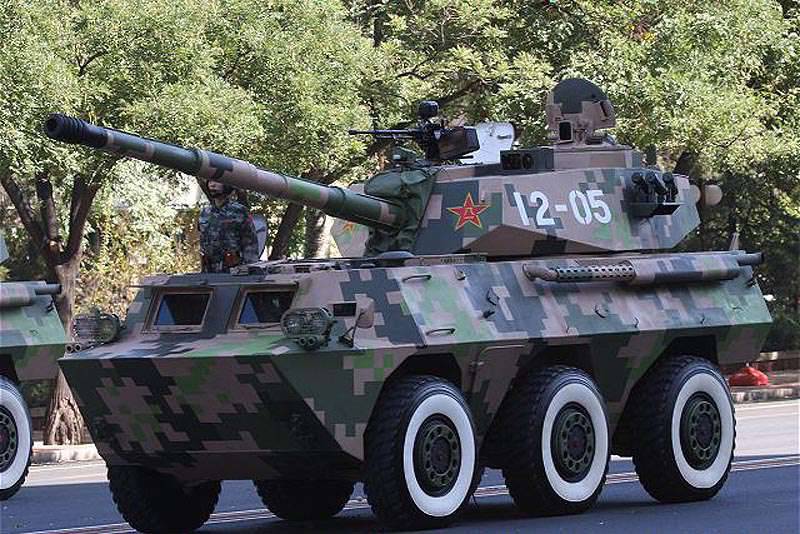